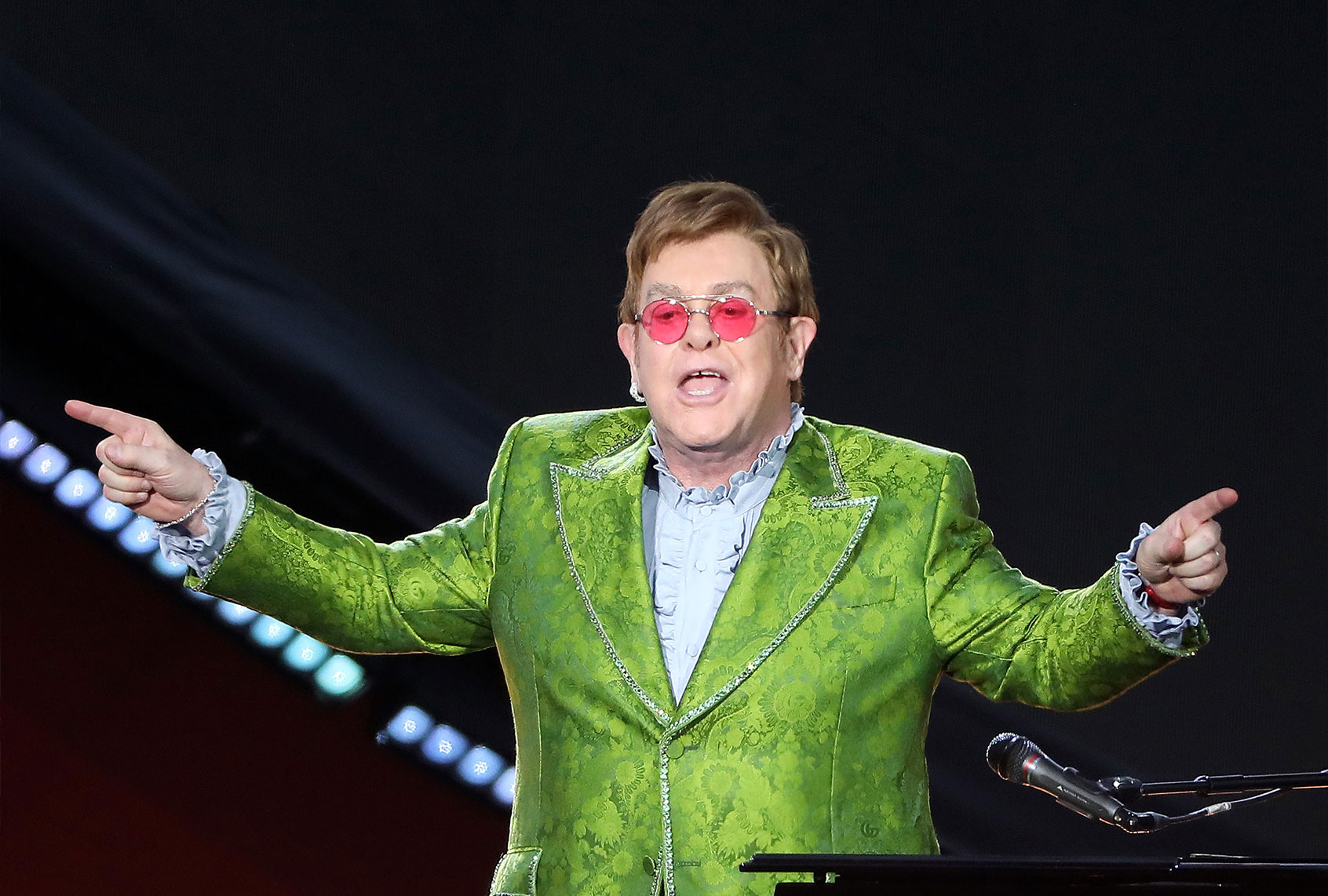 Like many musicians, Sir Elton John announced his retirement from touring in recent years so he could spend more time with family. Dubbed Farewell Yellow Brick Road, this trek was to be a three-year tour starting in 2018. The COVID-19 pandemic shifted this timeline slightly, of course, and John is now slated to wrap up his touring days in 2023.

A funny thing happened in between the 2018 tour announcement and the present day, however: Although his touring days are waning, John’s career is anything but winding down. If anything, he’s more in the public eye — and higher in the charts — than he has been in many years. John’s had three No. 1 UK singles in a row, kicking off with “Cold Heart (Pnau remix),” his collaboration with Dua Lipa, and “Merry Christmas” with Ed Sheeran. An accompanying collection of singles, “The Lockdown Sessions,” also topped the UK charts, beating out new releases from Duran Duran and Lana Del Rey.

For John, who turns 75 this week (March 25), comebacks are nothing new. In fact, he possesses a remarkable ability to rebound from career nadirs, something he’s occasionally experienced due to past dalliances with drugs or creative missteps. John’s recent burst of success came after a lengthy absence from the upper reaches of the chart. His previous Top 10 UK hit was in 2009, when the British rappers Ironik and Chipmunk released a high-energy interpretation of “Tiny Dancer,” while his last chart-topper was in 2005, with a featured role on 2Pac’s “Ghetto Gospel.”

That song weaved in elements of John’s 1971 song “Indian Sunset,” which points to a major reason John has remained so relevant: samples, interpolations and reinterpretations. In fact, his music catalog is considered rich source material. The artists who have sampled John’s songs reads like a list of A-list talent: Mary J. Blige, A Tribe Called Quest, The Weeknd, Mariah Carey. Impressively, the Dua Lipa collaboration even interpolated lesser-known corners of John’s catalog — remixer Pnau draws on 1976’s “Where’s the Shoorah?,” 1983’s “Kiss the Bride” and 1989’s “Sacrifice” — which serves as a pleasing backdrop as she prominently sings elements from the familiar “Rocket Man.”

Writer/director Baz Luhrmann also thanks John profusely for the success of the 2001 film “Moulin Rouge!,” which uses “Your Song” during pivotal moments. As it turns out, John’s enthusiasm for Luhrmann using the song was a catalyst. “I did not know Elton John at that stage,” Luhrmann told Cinema Blend about his initial contact with him. “I mean, we became great friends and we’ve even written stuff together. But I rang Elton, he said, ‘Wow that’s such a great idea. Come around, see me.’ So I flew all the way to London. And when Elton saw the idea, he said, ‘This is brilliant. I’m going to help make this happen.’ And he led the charge, and I’ll forever be grateful to Elton.”

John himself also consistently revamps older moments from his catalog in fresh ways — not necessarily an easy thing to do. He and Lady Gaga also teamed up to cover “Your Song” alongside her “Poker Face” and “Speechless” at the 2010 Grammys. Perhaps the most famous cover and re-do is his update of 1973’s “Candle in the Wind,” which experienced a resurgence in popularity after Princess Diana’s 1997 death. However, his touching, and even wrenching re-do of “Don’t Let the Sun Go Down on Me” with the late George Michael in the early ’90s eclipsed the original. 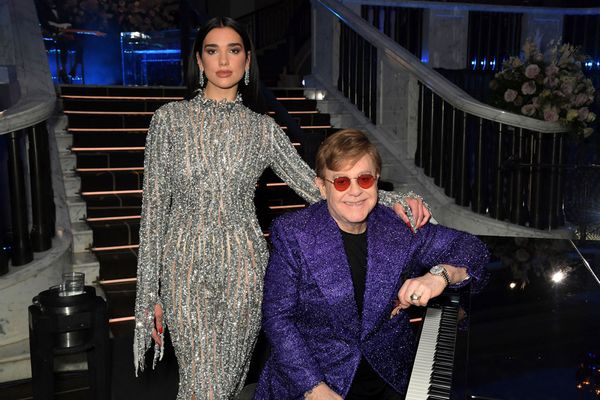 Dua Lipa and Sir Elton John attend the 29th Annual Elton John AIDS Foundation Academy Awards viewing party on April 25, 2021. (David M. Benett/Getty Images for the Elton John AIDS Foundation)Musical open-mindedness is another John hallmark. For example, he still retains insatiable curiosity for contemporary music. His Apple Music show Rocket Hour doubles as a showcase for new artists; a recent episode featured an interview with buzzy UK post-punk duo Wet Leg and songs by Gang of Youths, Fireboy DML and Ed Sheeran, Jvck James, and Emmy Meli. John is known as an avid record collector — his trips to Tower Records back in the 1970s were the stuff of legend — and it’s clear staying current buoys a passion for his own music.

There’s no artifice involved in this attitude. “I’ve never seen a person of any age so excited about music and so inspired,” Brandi Carlile told NME of a musical collaboration the pair did. “He did piano and vocals in under an hour and a half. It was unbelievable. And he told me about a whole bunch of bands I had no idea about and got after me for not knowing them and started sending me records.”

Carlile’s vocal support for John comes from a place of deep admiration: A long-time fan of his music, she has covered “Madman Across the Water” with rustic, soulful reverence. The respect is mutual, however. Speaking about their duet “Simple Things,” John called Carlile “one of the most talented songwriters” and noted their collaboration is “a real bucket list moment for me.”

That generous praise isn’t rare: John is also unfailingly supportive of younger artists and uses his platform to elevate others who could use a boost. “When I first heard the first thing I ever heard from Lorde, which was ‘Royals,’ I just thought it was unlike anything I’d ever heard before,” John told Zane Lowe. “It just blew my mind. It was so simple and yet so moving. The same thing with Billie Eilish.“

During the pandemic lockdown, John reached out and collaborated with many of these younger artists he appreciated. The result was “The Lockdown Sessions,” an eclectic collection highlighted by a deeply moving take on Pet Shop Boys’ “It’s a Sin” featuring the UK electro act Years & Years. (The song was made even more poignant since Years & Years’ Olly Alexander starred in a UK series of the same name that addressed the AIDS crisis with unflinching honesty.) John also included a solemn, piano-driven duet with Lil Nas X, “One of Me,” on which the rapper addressed people who underestimated his talent or staying power.

Speaking to Bustle, John was extremely complimentary about Lil Nas X’s music, visuals and LGBTQ advocacy. “He’s very smart. He’s very intelligent. He uses his words wisely. And he’s very, very courageous. We need more people like that in the LGBTQ community.” There’s more than a bit of modesty involved there, as today’s openly queer pop stars can look up to John for paving the way for out musicians.

Among other things, he was also one of the earliest advocates for AIDS research and funding—see his appearance on Dionne Warwick‘s 1985 charity hit “That’s What Friends Are For” — but his friendship with the late Ryan White led to the formation of the Elton John AIDS Foundation, which John recently noted has raised half a billion dollars and saved 5 million lives.

John recently expressed remorse that he couldn’t host his annual Elton John AIDS Foundation Oscars viewing party due to being on tour; instead, Lady Gaga, Billy Porter and Eric McCormack are co-hosting the March 27 gala event. Indeed, he’s slated to be at Pinnacle Bank Arena in Lincoln, Nebraska, that night. Clearly, Elton John still has plenty of work left to do — and songs to sing — before retiring from the road.