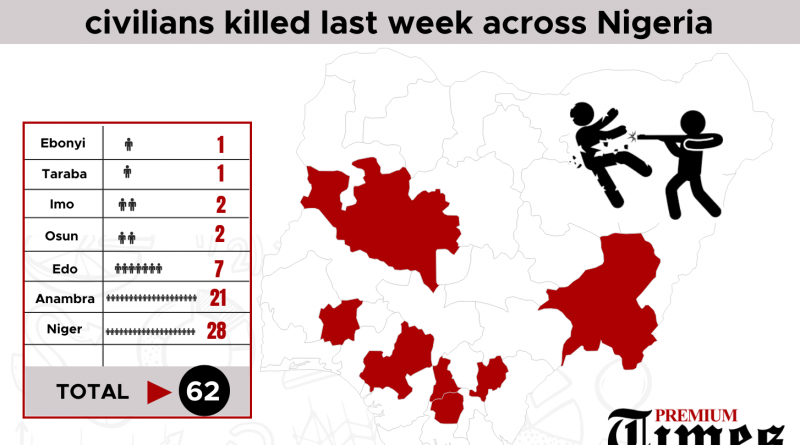 At least 62 people were killed last week (February 20-26) by non-state actors across Nigeria.

The victims included nine security personnel: four policemen, four personnel of the civil defence and one officer of the anti-drug agency, NDLEA. The remaining 53 were civilians.

The figure signifies an increase when compared to the previous week where 49 people, including three policemen, were killed.

The killings occurred in eight different incidents recorded in five of Nigeria’s six geopolitical zones. There were no reported killings by non-state actors in the North-west, the region that is worst hit by banditry and attacks by armed groups that are separate from Boko Haram.

Below are the recorded incidents:

An operative of the National Drug Law Enforcement Agency (NDLEA) was shot dead in Ebonyi State, Nigeria’s South-east, by gunmen.

The operative was killed, Sunday morning, during an attack on an NDLEA team on duty along the Enugu-Abakaliki Expressway.

Another officer of the agency reportedly sustained serious injuries from the attack.

Gunmen killed a businessman, Gab Ofoma, who was the chairman/CEO, Ofoma Associates Limited.

Mr Ofoma, an indigene of Umunnealam, Umudim, Nnewi, was shot dead on Sunday while heading back to his base in Port Harcourt after he visited his home Nnewi.

The incident happened around the Ukpor-Lilu-Orsumoghu-Azia-Mbosi Road, which connects Anambra and Imo states.

Also in Anambra, suspected cultists opened fire on mourners, while disrupting a funeral ceremony in the state.

The officials were killed when policemen on duty engaged the hoodlums in a gun battle, as the gang threw Improvised Explosive Devices into the station.

The terrorists also killed six residents of the town during an earlier night raid on Sunday.

According to the police, one of the victims, Toib Mutallib, was killed by suspected political thugs that stormed his ward in Agberire, a community in the Iwo Local Government Area of the state.

The gunmen laid siege on Uromi town in Esan Northeast Local Government Area of the state.

Gunmen in the early hours of Saturday killed one Levi Gbashi, an aide to Governor Darius Ishaku, in Donga Local Government Area of Taraba State.

The incident happened at Ityopaa Village when he and others were about to leave the venue of the burial they attended in the village.

Armed groups killed at least 18 people, including a father and his son, in separate attacks in Mashegu, Lavun and Wushishi local government areas of Niger State.

Many residents were displaced in the attacks which occurred between Friday and Saturday.

Family of graduate killed by policeman seeks justice after giving IPO, others N230,000 – The Eagle Online