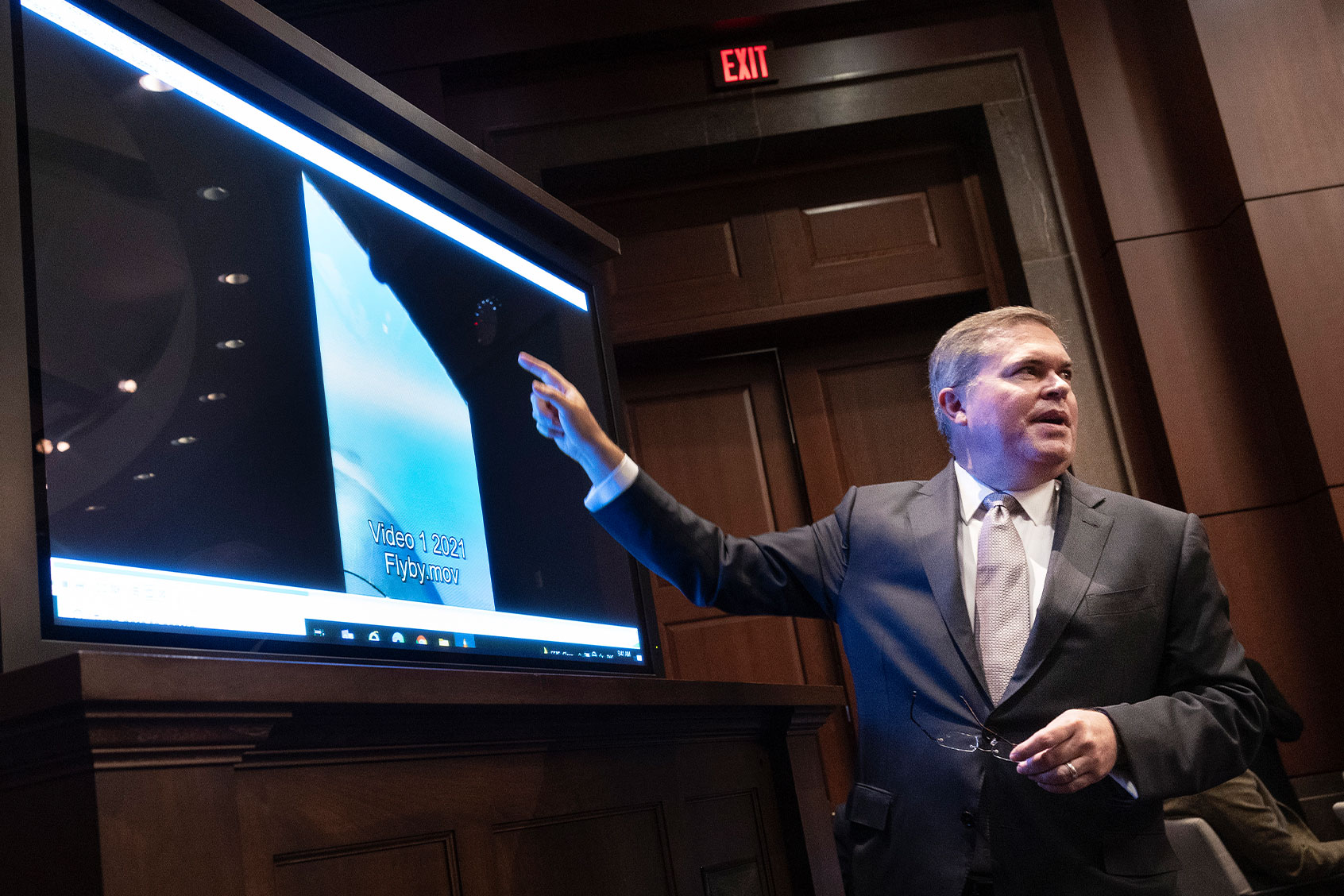 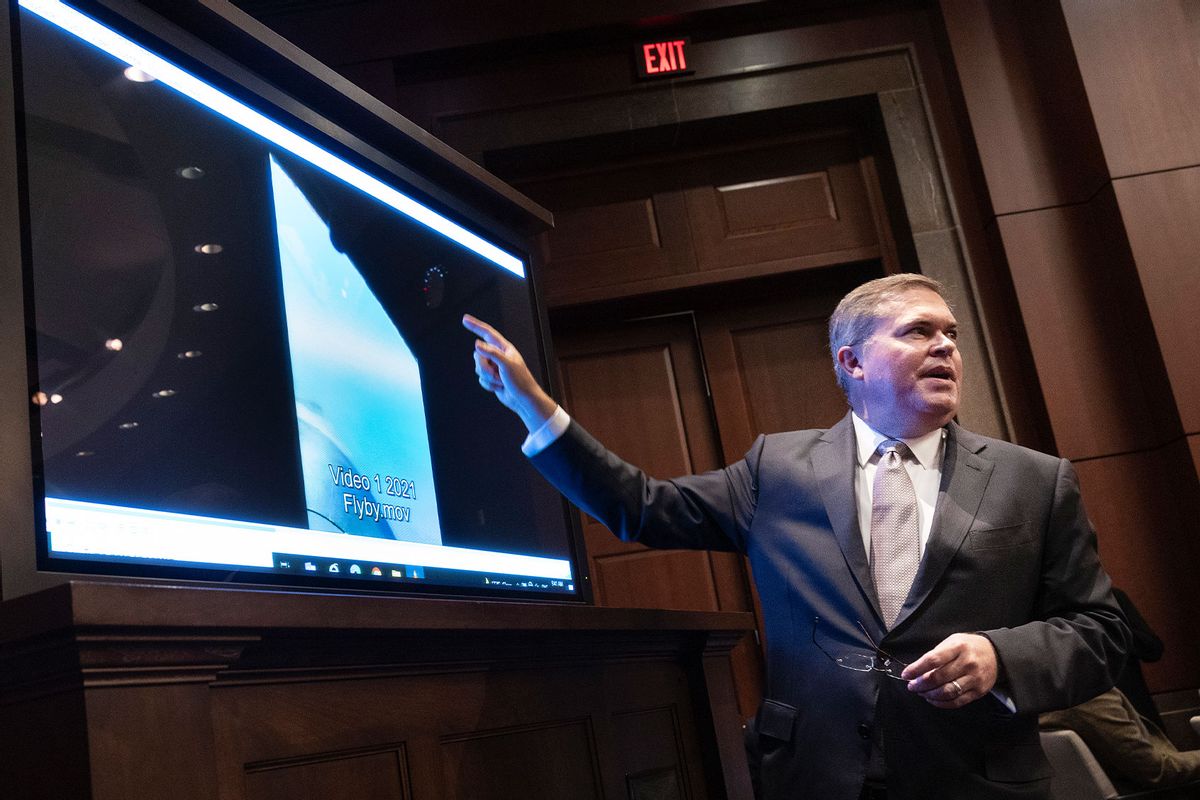 Congress held a strained hearing Tuesday on UFOs, in which defense officials juggled a genuine attempt to provide adequate transparency while maintaining measured closure with regard to sensitive intelligence.

Two top defense officials, Deputy Director of Naval Intelligence Scott Bray and Undersecretary of Defense for Intelligence and Security Ronald Moultrie, appeared before Congress to testify. Rep. André Carson (D-Ind.) led the first public government hearing in over 50 years on the matter of UFOs, or Unidentified Aerial Phenomena as the Department of Defense has rebranded them.

“Since the early 2000s, we have seen an increasing number of unauthorized and or identified aircraft or objects in military-controlled training areas and training ranges, and other designated airspace reports of sightings are frequent and continuing,” Bray told members of Congress.

Bray attributed this increase to efforts in the Navy to destigmatize reporting of unexplained sightings through the UAP Task Force. He also added that improved capabilities of various sensors, as well as a greater presence of unmanned aircraft and debris such as balloons in the airspace, contributed to the rise. An unclassified report from the Office of the Director of National Intelligence revealed that 80 out of 144 UAPs between 2004 and 2021 were recorded on multiple instruments. The cause of most remains unknown, putting the UAP in an “other bin” as Bray called it.

A variety of potential explanations — airborne clutter, natural atmospheric phenomena, government or industry developmental programs, foreign adversary systems — could explain the event. Though defense officials maintained that UAP has never been attributed to extraterrestrial sources, both Bray and Moultrie were open to the possibility of extraterrestrial visitors as a possible cause.

A science-fiction aficionado, Moultrie took a few humorous jabs from members of Congress about his attendance at certain unnamed comic conventions. Leaning into it, Moultrie seemed to don an everyman persona, speaking about his family’s lines of questioning about aliens, adding that intelligence officials are “people just like you” curious about extraterrestrial life.

The curious line of questioners and commenters included a curious moment from Rep. Rick Crawford (R-Ark.), who at one point seemed to confused the social media platform TikTok with the popular candy Tic Tac. Crawford’s technological stumbles continued; at another moment during the hearing, the subcommittee sat in relative silence as Bray struggled to pause a video on a frame of one UAP as it whizzed past a fighter jet.

In the video shown, the brief blip on the screen appears to operate with an unknown source of propulsion. Nearly giving up at one point, Bray finally landed on a frame of an indiscernible reflective sphere after several minutes of toggling. Bray said defense officials have no explanation for phenomena like this.

“You need to show us, Congress and the American public, whose imaginations you have captured, you are willing to follow the facts where they lead,” Carson said. “We fear sometimes that the DOD is focused more on emphasizing what it can explain, not investigating what it can’t.”

Despite breaking down a couple of videos, the two defense officials revealed little new information to the public. Nothing indicates they are alien, but they go in the “other” category in a new system of classification that leaves room for the unexplained.

To those hoping for some grand revelation of extraterrestrial life, the hearing was a disappointment. What it highlighted was a need for better calibration and advancement of instruments and an emergent concern in congress about unnecessary military secrecy, a relic of Cold War intelligence operations.

“You need to show us, Congress and the American public, whose imaginations you have captured, you are willing to follow the facts where they lead,” Carson said. “We fear sometimes that the DOD [Department of Defense] is focused more on emphasizing what it can explain, not investigating what it can’t. I’m looking for you to assure us today that all conclusions are on the table.”

Five months after a National Defense Authorization Act sought to establish a permanent office to address UAP sightings, part of the hearing in the Counterterrorism, Counterintelligence, and Counterproliferation Subcommittee was held publicly. The act also required an annual report on UAP activity and semiannual briefings for Congress.

Representing a shift toward transparency, the act followed several high-profile video leaks of unidentified aircraft and a subsequent stream of documents relating to UAP released to the public. At various points, Moultrie and Bray committed to transparency and disclosing findings to the public when doing so would not reveal military secrets to “potential adversaries.”

Repeatedly, lines of questioning about Department of Defense intelligence were met with the same response: They could discuss it in the closed hearing held afterward.

When pressed by Rep. Mike Gallagher (R-Wisc), both denied knowledge of any official DOD investigations into UAP between the termination of Project Blue Book in 1969 and the recently uncovered Advanced Aerospace Threat Identification Program that ended in 2017.

Rep. Carson made comments early on that UAP investigations represent “one of the few times we can demonstrate some degree of bipartisanship.” With the goal of assessing the stalled establishment of the Airborne Object Identification and Management Synchronization Group (AOIMSG), the C3 Subcommittee quickly devolved into partisan incoherence.

At one point Rep. Darin LaHood (R-Ill.) suggested those who attempt to spread misinformation about UAP sightings should be treated criminally. Rep. Peter Welch (D-Vt.) on the other hand wondered how defense officials could investigate these reports considering “it’s not at all beyond the pale that there would be a visit here.”

Read more on extraterrestrials and the US government:

He’s on a mission from God: Pennsylvania GOP candidate Doug Mastriano’s war with the world

What condiments would you take on a cross-country move?