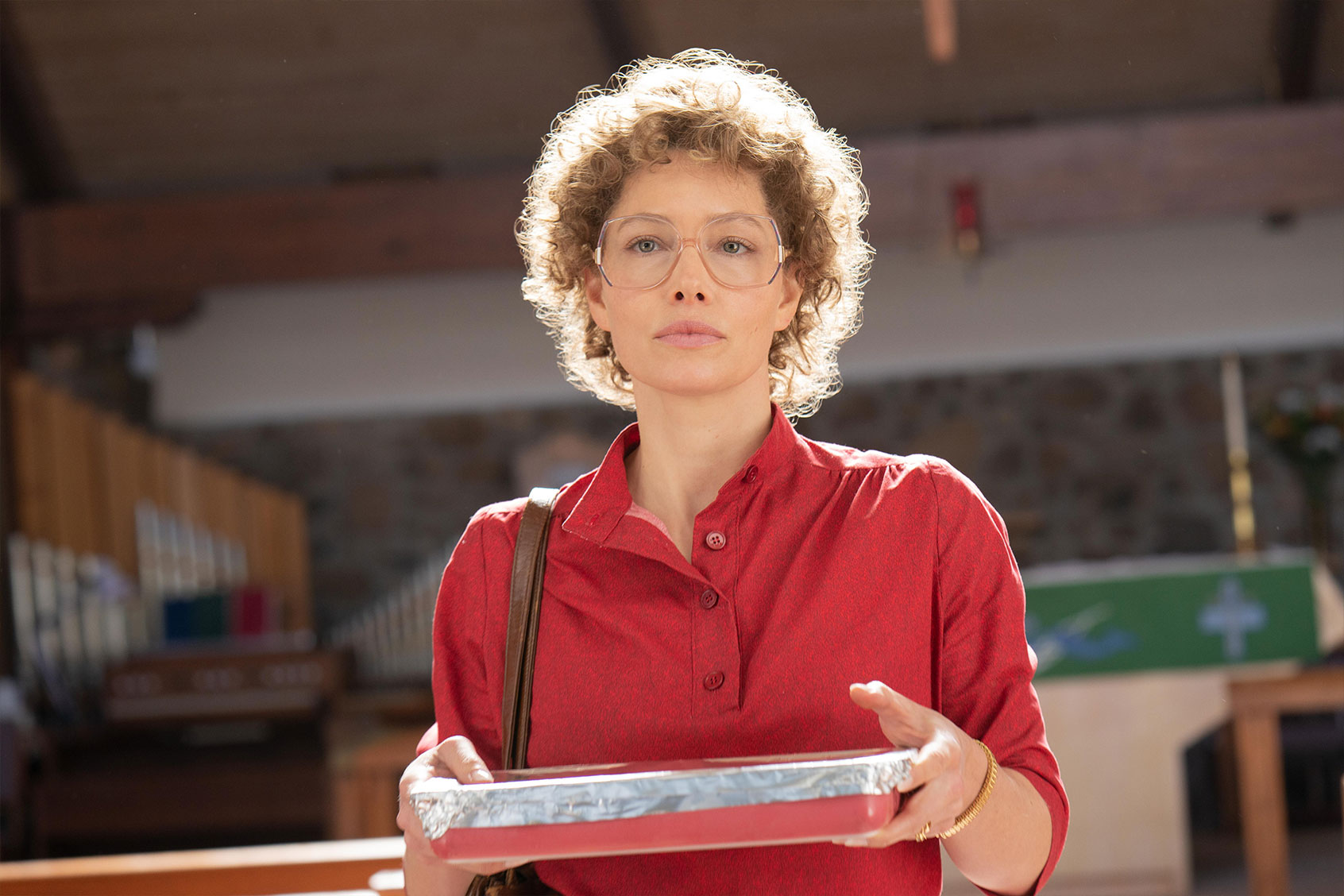 Notwithstanding its many faults, Hulu’s “Candy” assuredly understands the terror of the repressed housewife – that which she feels, and that which she instills in others. Michael Uppendahl set that tone in the first episode’s direction with a close-up on the face of Jessica Biel’s Candy Montgomery as she’s rehearsing a story to tell her Vacation Bible School kids.

Warmly giggling at some spots, she weaves a fable about a beautiful young tree that does everything right. Then she frowns when a woodcutter enters the picture and, despite the tree’s protests, cuts it down. The supposedly happy denouement is that the tree’s timber ends up being used to make Jesus’ cross.

And the moral of this story? “Next time you’re sad because you didn’t get what you want, you just wait!” she chirps, “Because God has something even better for you.”

Candy Montgomery landed 41 blows on Betty Gore’s mutilated body, all while the woman’s infant daughter was crying in a nearby room.

To know Candy Montgomery’s case is to recognize the layers of obvious metaphor and subtler ones in this morality play. In 1980, Montgomery attacked her friend Betty Gore (Melanie Lynskey) with an ax in what she claimed was an act of self-defense, which it very well might have been.

The part of the crime that still baffles people to this day, other than the outcome of the trial, is the detail that Montgomery landed 41 blows on Gore’s mutilated body, all while the woman’s infant daughter was crying in a nearby room.

The ferocity of the act goes against Candy’s image as a pillar of the church, a devoted mother, and a faithful wife in her small Texas community. She may not wear the classic apron and heels of the desperate housewife, but Biel’s title character and Lynskey’s walking sacrifice embody the victim-virago dichotomy that’s contorted generations of women.

But as series co-creator Robin Veith telegraphs through Candy’s Bible-inspired fiction, her self-portrait as a flawless Madonna is as fraudulent as her fable. Nevertheless, she insistently smiles through the ludicrous notion that it is better for a tree to die and be fashioned into a torture device than it is for it to be left alone to live and grow.

“Candy” rarely differentiates itself from the slew of similarly themed dramas vying for our attention, which will soon include another version of this case starring Elizabeth Olsen and Lily Rabe coming to HBO Max later this year.

But as an examination of how society interlinks a woman’s value to her desirability and willingness to conform to society’s limited expectations for her, it attains many moments of pang-inducing lucidity. That sting could be as attributable to the moment we’re living through as to Biel’s and Lynskey’s performances, with each making us feel their characters’ misery in singular ways. 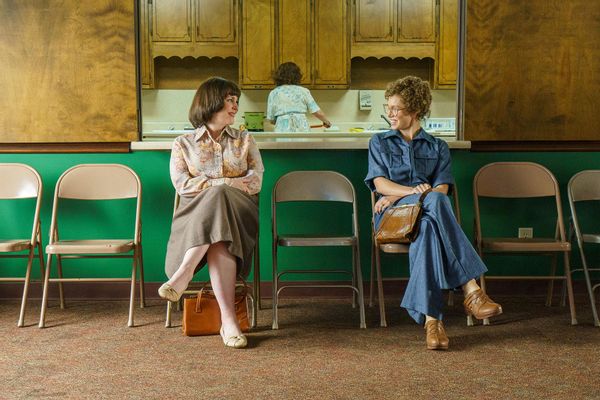 Melanie Lynskey as Betty Gore and Jessica Biel as Candy Montgomery in “Candy” (Tina Rowden/Hulu)Mainly their pain is related to their marriages. Both Candy and Betty are married to good men, but they’re also boring and lacking in any ambition to be better. Candy’s spouse Pat (Timothy Simons) is a wonderful father, but takes her for granted; when she asks him if he doesn’t want to hang out with other men he lovingly informs her that she and the kids are the only friends he needs.

Lynskey plays Betty as a woman idling in a state stuck between meekness and fury, which translates to her husband Allan (Pablo Schreiber) as neediness. On the day she dies, shown in the first episode, she begs him not to go on the latest of his business trips.

But while she sits deflated in a post-partum funk at home, Candy bustles about with purpose, her tight cheer covering the less charitable side of her personality.

When “Candy” hits its stride in the second and third episodes, it is because Biel and Lynskey make us feel something for these women and the lack of choices they have in life aside from the roles of wife and mother.

Biel is especially animated when Candy bulldozes through rooms with a blazing smile and sing-song voice, trying to exercise power where she has none and sweetly bullying those she can with false kindness, including Betty.

Lynskey’s outstanding-as-usual take on Betty is that of a conquered soul trying to creep from one end of a dim day to the other, her unfashionable clothing and hideous bangs conspiring to sentence her to permanent invisibility. 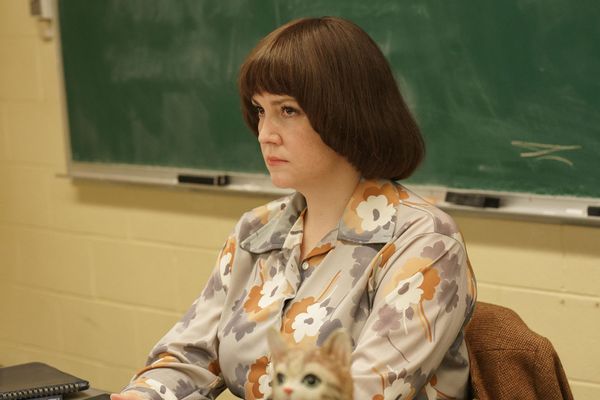 Melanie Lynskey as Betty in “Candy” (Tina Rowden/Hulu)Candy has an equally awful wardrobe topped by a skull-squeezing perm and giant glasses, all of which Biel physicalizes by sharply pleating every aspect of her portrayal.

Candy is a doer and a planner, at times comically so, although the harvest gold filter coloring the visuals flushes away one’s will to laugh. Still, there’s something tragically funny about a woman who plans a life-altering transgression by building a business-like presentation around it. And she enacts that wrongdoing with an equal measure of precision and heartlessness, talking about it later as if it were a dreamy sequence in one of the cheap romance novels she escapes into.

Aficionados of TV and cinematic history will find a few details worth appreciating in “Candy,” including its thematic nods to so-called “women’s films.”

These are the sequences through which “Candy” realizes its potential as a critique of Christian patriarchal hypocrisy in the ways such close-knit communities batter and betray each other with unrealistic and demanding expectations. That goes for the ways Candy and the other women in the church turn on each other, but also for the men in their lives, none of whom have much to do outside of work and be married.

Once the police work creeps in in the fourth episode, introducing a couple of cameos designed to trend on social media without adding much meat, even that appraisal loses its bite along with the story’s focus.

Granted, you’ll see many of its sinkholes before that happens, mainly by way of Schreiber and Simons, two indistinct roles that leave these otherwise capable actors without much range to play with. 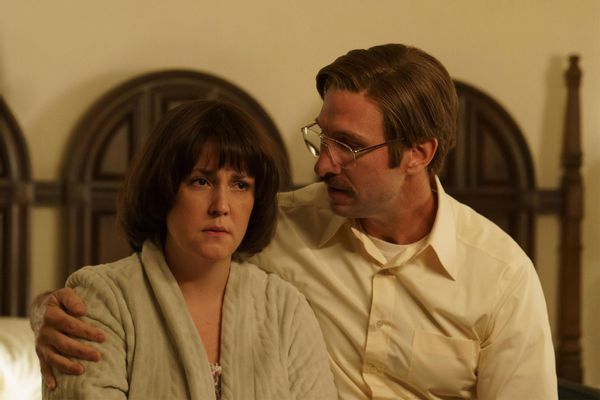 Melanie Lynskey as Betty and Pablo Schreiber as Allan in “Candy” (Tina Rowden/Hulu)Arguably their pointlessness may be the point; at Betty’s funeral, her father tells a grieving Allan, “She was so beautiful, loving, smart, college-educated, so full of life! She had her pick. And she chose you.” Even if that was the intent, there is a way to write such characters without wasting their space in the story. But that didn’t happen here.

Aficionados of TV and cinematic history will find a few details worth appreciating in “Candy,” including its thematic nods to so-called “women’s films,” melodramas studios used to dismiss but, in a real way, inform the true crime genre. That’s a clever stylistic nod on the part of Veith, a “Mad Men” alumnus who co-created the series with Nick Antosca. Hulu leans into the retro style they’ve created, augmented by Ariel Marx’s spare score, by releasing its five parts nightly this week, in the style of old-school network primetime miniseries.

But just as those lost the audience with time, “Candy” stops sticking with us by its end, closing on a resolution that dissolves into nothing. Fortunately this case will be re-opened in a few months, but its squandered potential is still frustrating.

The five-part series “Candy” streams a new episode each night, from Monday, May 9-Friday, May 13. Watch a trailer for it below, via YouTube. 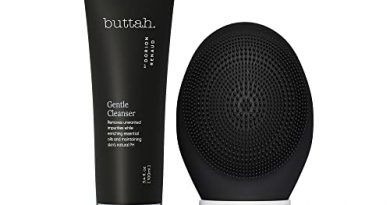 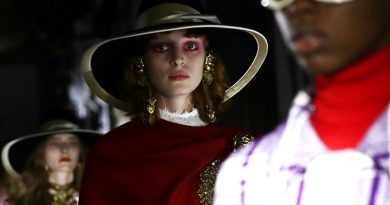