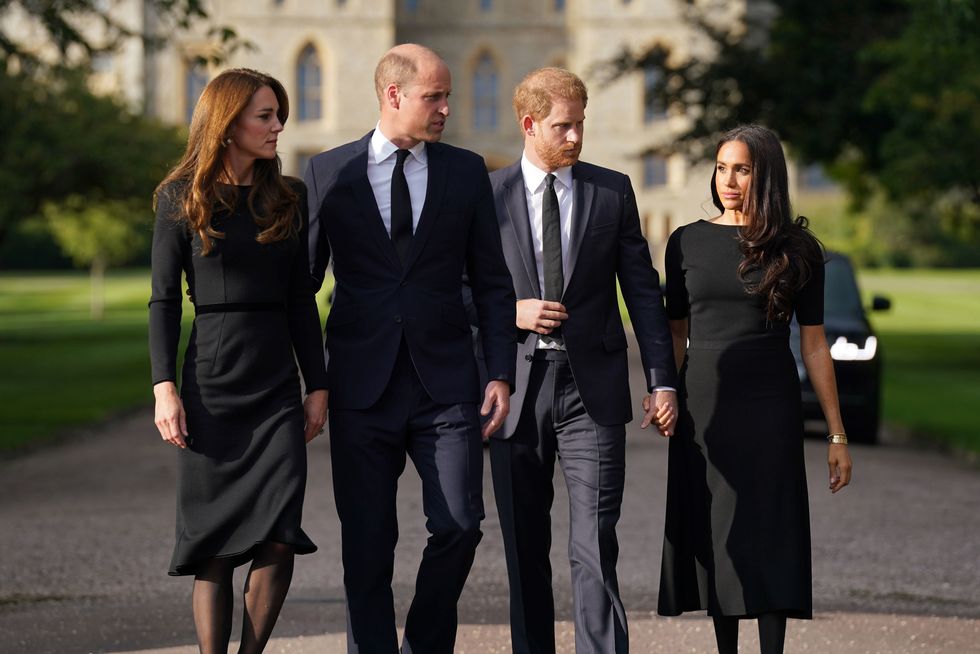 While the former royal Fab Four’s relationship may be far from completely healed, Page Six reports that Prince William, Kate Middleton, Meghan Markle, and Prince Harry did have a private dinner together on Tuesday, ahead of the Queen’s funeral this upcoming Monday. The royal family had come together to view Queen Elizabeth II’s coffin at Buckingham Palace that evening, and inside the palace, the family had a meal together.

The outlet confirmed that William, Kate, Meghan, and Harry joined the “intimate sit-down.” Additional details about the dinner were not shared. It marks the first time the four have privately spent time together that the press has learned about this year.

William, Kate, Meghan, and Harry got major media attention for their decision to do a walkabout on Saturday in Windsor together. It was their first public reunion since March 2020 during Meghan and Harry’s final events as working royal family members. 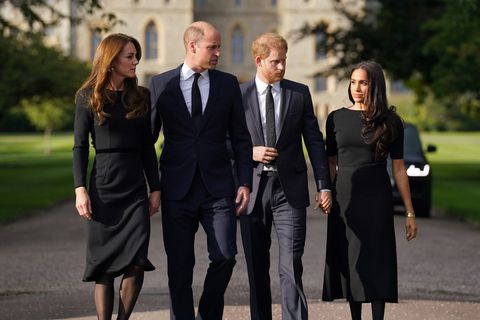 Kate, William, Harry, and Meghan during their Windsor walkabout.

The two couples also appeared one behind the other on Wednesday during the Queen’s coffin procession from Buckingham Palace to the Palace of Westminster. They did not interact with each other during the event.

While the walkabout was a show of unity among the four, it didn’t really mark a reconciliation. Royal photographer Arthur Edwards spoke in an interview about how William invited Meghan and Harry to join him and Kate more for optics than anything else.

“When the Prince [Charles] said he loved Harry and Meghan in his speech that shook me as well. Then when Meghan got out the car, I was amazed,” Edwards said. “But obviously William has got to do something about it. He spoke to his brother and said, ‘Let’s make a combined effort here.’”

“They did it because if Meghan had turned up for the funeral on Monday all the papers would be talking about Meghan and the King does not want that,” Edwards added. “He wants it all about The Queen and nothing else. No distractions. Whether they will get back together who knows, there is a big rift between the brothers.”

Meghan recently spoke to The Cut about her strained relationship with the royal family (with the exception of the Queen, with whom she and Harry were close). “I think forgiveness is really important,” she said. “It takes a lot more energy to not forgive. But it takes a lot of effort to forgive. I’ve really made an active effort, especially knowing that I can say anything.” She then went quiet, ultimately saying, “I have a lot to say until I don’t. Do you like that? Sometimes, as they say, the silent part is still part of the song.”

I won big on “Jeopardy!” So why does it still haunt me?