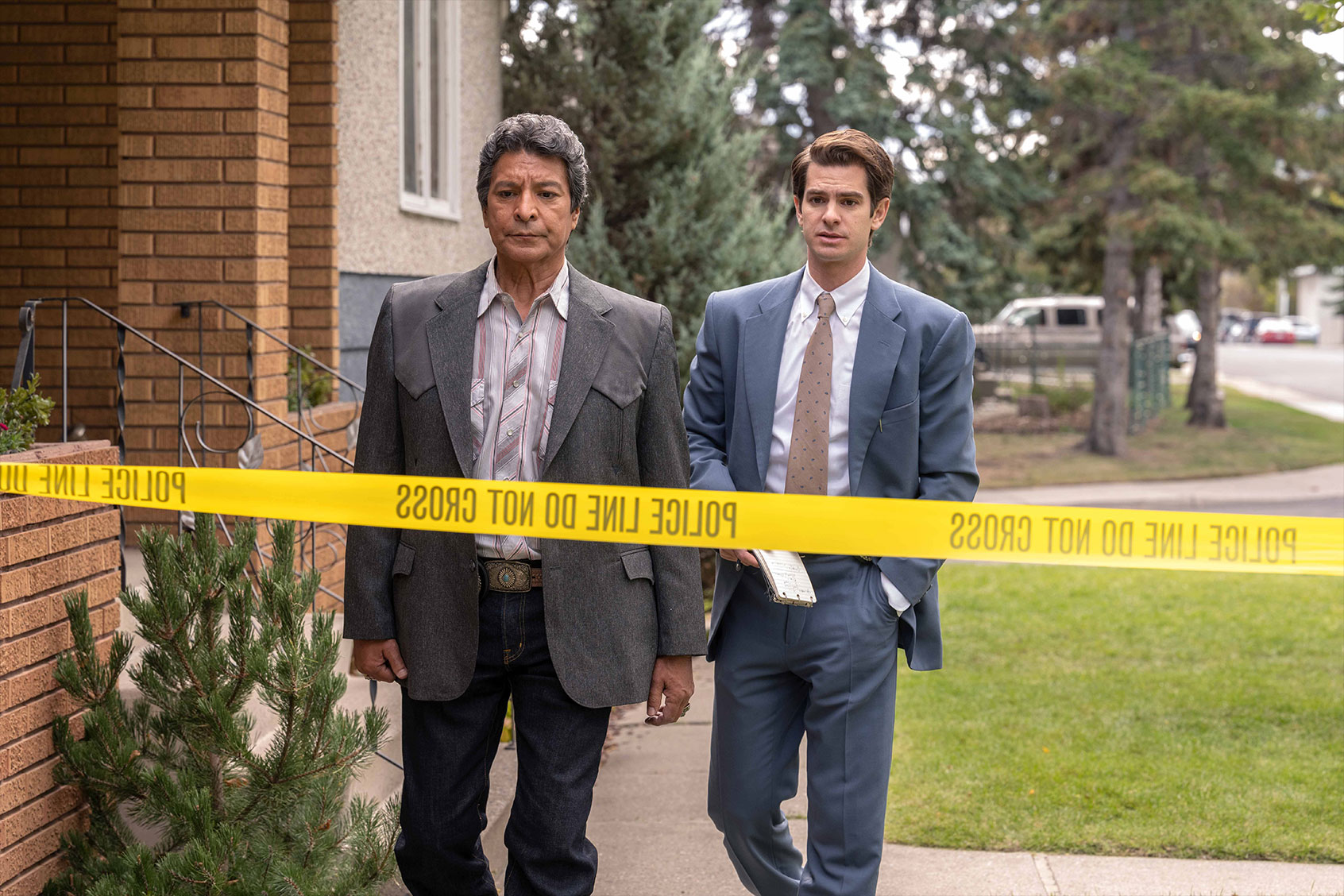 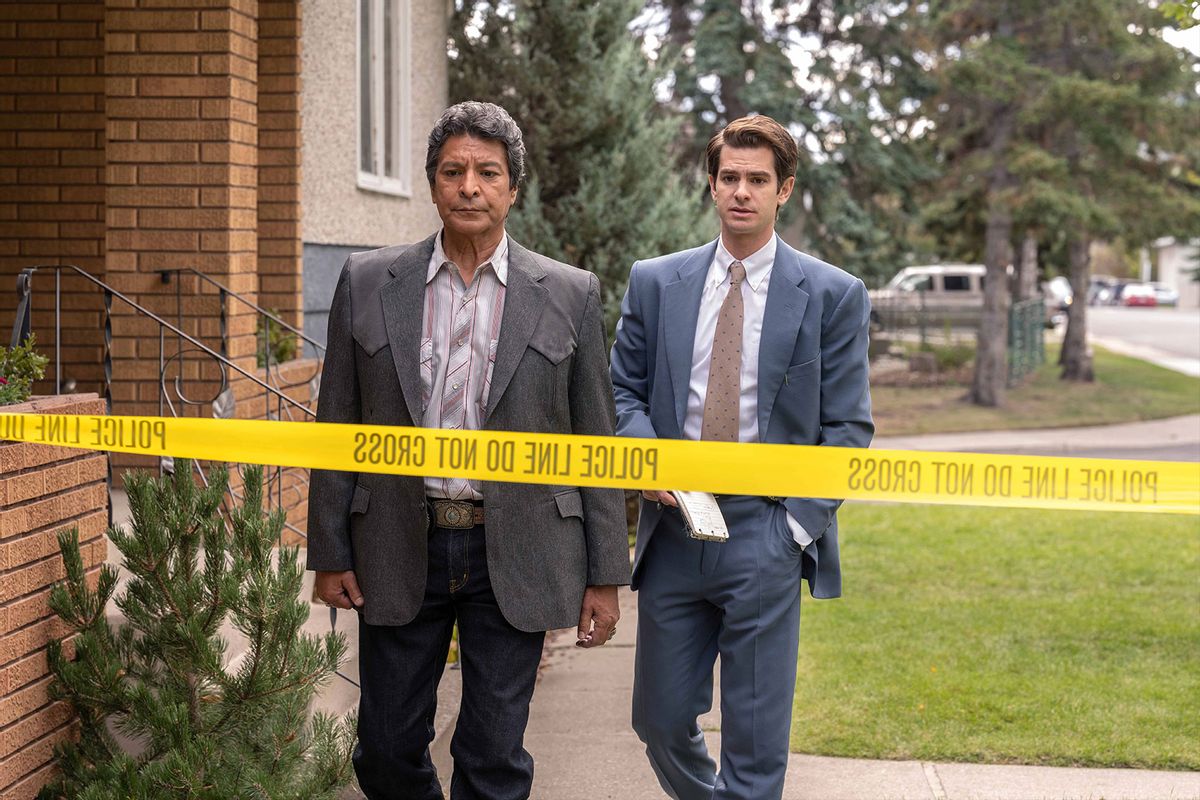 You can be forgiven for perhaps assuming at the start of “Under the Banner of Heaven,” the new limited series on Hulu, that the family of Jeb Pyre (Andrew Garfield) is fundamentalist. His two daughters play in long, old-fashioned prairie dresses, nearly tripping over the ruffled hems as they ride bikes.

But it is simply “Pioneer Day” in the suburbs of Salt Lake City, Utah, and the girls are dressed in costume as their Mormon ancestors. For others in the show, for some women: antiquated and modest dress will be standard, expected, as is their role of being subservient to men in a radical form of fundamentalism — and one that splinted off from the Latter-day Saints (LDS).

If you’re not familiar with some of the tenets of LDS — the avoidance of caffeine and alcohol, for example, or the role of men as the “holder of the priesthood” — “Under the Banner of Heaven” can be a little intimidating. It’s not an easy entry in the five episodes given for review, at least not when it comes to 1980s Mormonism, where the bulk of the story is set. When it comes to historical Mormonism, the founding of the religion by Joseph Smith, the show is all lesson.

RELATED: “Outer Range” is Amazon’s creepier answer to “Yellowstone” with a yawning hole of a mystery

“Under the Banner of Heaven” is based on the 2003 book by the same name by Jon Krakauer, a journalist who also wrote “Into the Wild.” Krakauer’s bestselling “Under the Banner of Heaven,” subtitled “A Story of Violent Faith,” is a history of Mormonism woven with the thread of a contemporary Mormon crime: the gruesome murder of Brenda Lafferty and her 15-month-old baby Erica. Creator Dustin Lance Black makes the smart and kind decision to never show images of the murdered child.

The violence here is a casual violence, the kind that passes down for generations.

There’s plenty of other horrible stuff, including an incredibly tense meal where Brenda meets her future husband Allen Lafferty’s (Billy Howle) very large extended family. You know instantly from her smart, independent ways she will not be a good fit for the clean-cut and suspicious crew. That her bubbliness will be squashed and her spark, extinguished.

The violence here is a casual violence, the kind that passes down for generations. A domineering patriarch (Christopher Heyerdahl) raises rageful sons, anger and entitlement simmering inside them. Rory Culkin gives an unhinged performance as Samuel Lafferty, and Wyatt Russell (who bears a startling resemblance to the real-life Allen Lafferty) channels a kind of frantic, hippie cult leader in Dan Lafferty as several of the men descend into dangerous, fanatical fundamentalism. Long hair and beards and what they symbolize are a big part of the show.

Garfield plays Jeb, an earnest Mormon who dismisses his wife’s concerns about his mother’s dementia and would sooner blame anyone, at first, other than Mormons for these heinous crimes he’s tasked with investigating. The “Losing My Religion” storyline is not new, and Jeb as a detective, an invented composite character in a departure from the book, takes up a lot of screen time. His soul searching just doesn’t feel very searching, though his clean-cut act is believable. When Jeb fanboys over the Prophet praying for his case, it’s painful how real Garfield makes it seem. (Jeb might also be a stand-in for Black, who was raised a Mormon.)

Jeb has a nice rapport with partner Bill Taba (Gil Birmingham of “Yellowstone”) a Native, non-Mormon who tries to watch his swearing around Jeb and offers him fast food on the sly. The always commanding Birmingham, like Daisy Edgar-Jones from “Fresh” as the effervescent Brenda, is not given enough to do. He tries to support his partner’s faith and to understand. Likable Bill, who charmingly says “thank you” when told he’s a bad influence on Jeb, is the closest thing the audience has to a guide to Mormonism, but his talents are underused.

This is an ambitious undertaking, to turn a nonfiction bestseller into a true crime thriller, but it’s not exactly thrilling.

The show attempts to circumvent an audience’s potential unfamiliarity with its central religion with artificial-feeling history lessons. One of the strengths of the book was the sense of history, how Krakauer interwove the far past with interviews he had conducted with one of Brenda’s convicted killers. That’s not the case in the adaptation, where historical flashbacks of the beginnings of Mormonism seem a bit like “Unsolved Mysteries” re-enactments. Hopefully the history will get more seamless as the show goes on.

In the first few episodes, the transitions falter, with the men held for questioning in the murders going into long tirades that lead into the pioneer flashbacks. It feels didactic and odd. Wouldn’t Jeb already know well some of the history of his own faith, even if he is not yet ready to acknowledge its darkness and the pain it has caused women, girls and others? The historical insertions also take the audience away from some intense action, making the pacing of the show feel off at times.

This is an ambitious undertaking, to turn a nonfiction bestseller into a true crime thriller, but it’s not exactly thrilling. The 1980s look brooding and gritty here, moody as a western noir. The pioneer times look theatrically staged, especially when compared to the stark and rough American West of recent fare like “The Power of the Dog.”

It’s also interesting what the show skips over. So far, for example, we’ve not been shown a part in the book where Joseph Smith allegedly received the divine revelation about taking multiple wives (called “The Peace Maker”), supposedly only after his wife caught him cheating with a serving girl. We do get the resistance of Smith’s wife, Emma (the quietly commanding Tyner Rushing) to his polygamy. But, like Brenda’s story, the story of the women — and all the stories here — take a backseat to the invented one: Jeb questioning his own faith.

The strongest scenes of “Under the Banner of Heaven” are set in Brenda’s past, her attempts to fit into a new family more strict and damaging than her own Mormon upbringing, where her father was a Mormon bishop but one who believed in his daughter’s right to have an actualized life for herself. There’s an intense stand-off to come, but overall, the show struggles under the weight of its history lessons, how to balance them with action and how to convey them to what may be an unfamiliar audience.

“Under the Banner of Heaven” premieres Thursday, April 28 on Hulu. Watch a trailer for it below, via YouTube.

With the sleepy “Moon Knight,” come for the MCU, but stay for Oscar Isaac’s dodgy cockney accent