Cristiano Ronaldo rescued a point for Manchester United in a 1-1 draw against Chelsea in Thursday’s Premier League clash at Old Trafford.

“Not only the goal Cristiano scored but his whole performance, his attitude at the age of 37, this is not normal to do that,” said Man United interim manager Rangnick.

“If he plays like he did today he can still be a big help to this team.

“It was a good point for us. In the first half Chelsea dominated the game. You can see that they have top players and are well organised, and it’s not so easy to get hold of them,” added Rangnick, who also refused to be drawn on reports linking him with the job of Austria national team coach. Sources have told ESPN he is in discussions over the role, though intends to also take up a position as consultant at Old Trafford..

Despite controlling much of the game, Chelsea failed to make the most of a host of chances in a contest between two teams’ whose tumultuous seasons are drifting toward their conclusion.

“One team deserved to win and that was us. We didn’t take it. It was a very, very good performance but we were not decisive enough. We lacked a bit of determination in the box to win the game,” Chelsea manager Thomas Tuchel said.

“It sometimes happens. It’s on us to learn from it. You need to be clinical to get the reward. We have to live with a point but it’s not a fair result.

“We worked so hard to get the lead and suddenly the opponent gets one free shot and scores.”

The result makes little impact on either team in the Premier League standings. Chelsea remain a comfortable third, six points clear of Arsenal in fourth and eight points above fifth-placed Tottenham. United stay a further three points back in sixth, having played two games more than the sides above them, with the result doing little to resuscitate their long-shot hopes of making next season’s Champions League.

Chelsea were especially dominant the first half, but failed to make their superiority pay, with Kai Havertz the chief culprit in front of goal. Twice the Germany international was played through by N’Golo Kante but first shot wide of the near post and then fired too close to David de Gea.

The pattern was repeated soon after when Havertz headed straight at De Gea from six yards after being set up by the impressive Reece James.

It took until the hour-mark for Chelsea to get on the scoresheet. The method was no surprise as James supplied another cross from the right, Timo Werner flicked on and Alonso adjusted his feet before volleying expertly into the far corner.

But, despite supplying no previous attacking threat, United were level within two minutes.

Perhaps switching off after the goal, Kante gave the ball away in his own half, allowing Nemanja Matic to set up Ronaldo for a typically emphatic finish from close range.

Remarkably, it was the first goal Ronaldo had scored in 12 league appearances against Chelsea. It was also the Portuguese star’s 17th goal in the league this season, with only Liverpool’s Mohamed Salah having scored more.

Chelsea, who brought former Man United striker Romelu Lukaku off the bench, still had another chance to seal all three points but James’ effort with his weaker left foot cannoned off the outside of the post.

Follow live: Ecuador, Senegal square off with a spot in the round of 16 on the line 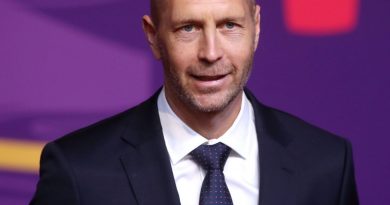