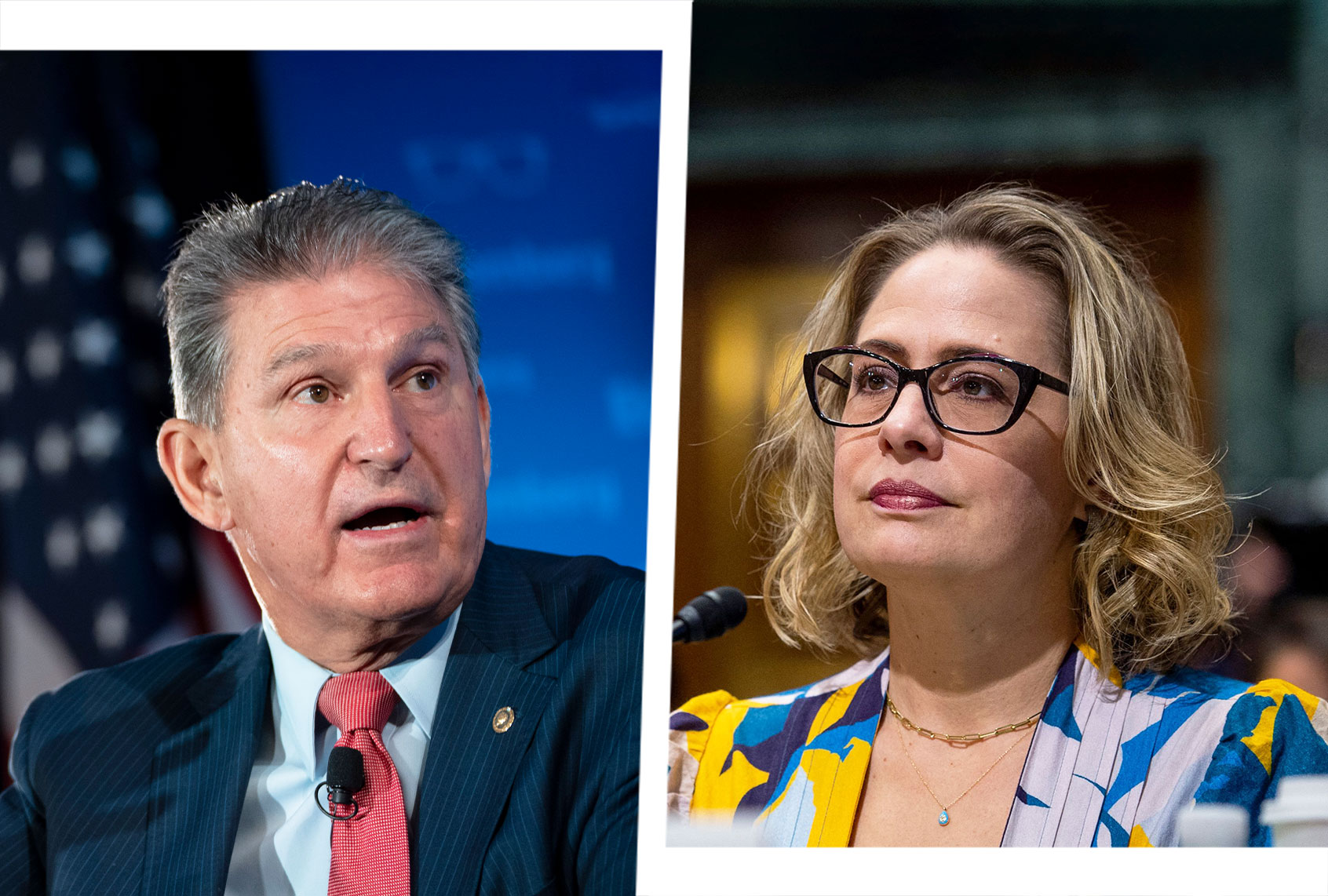 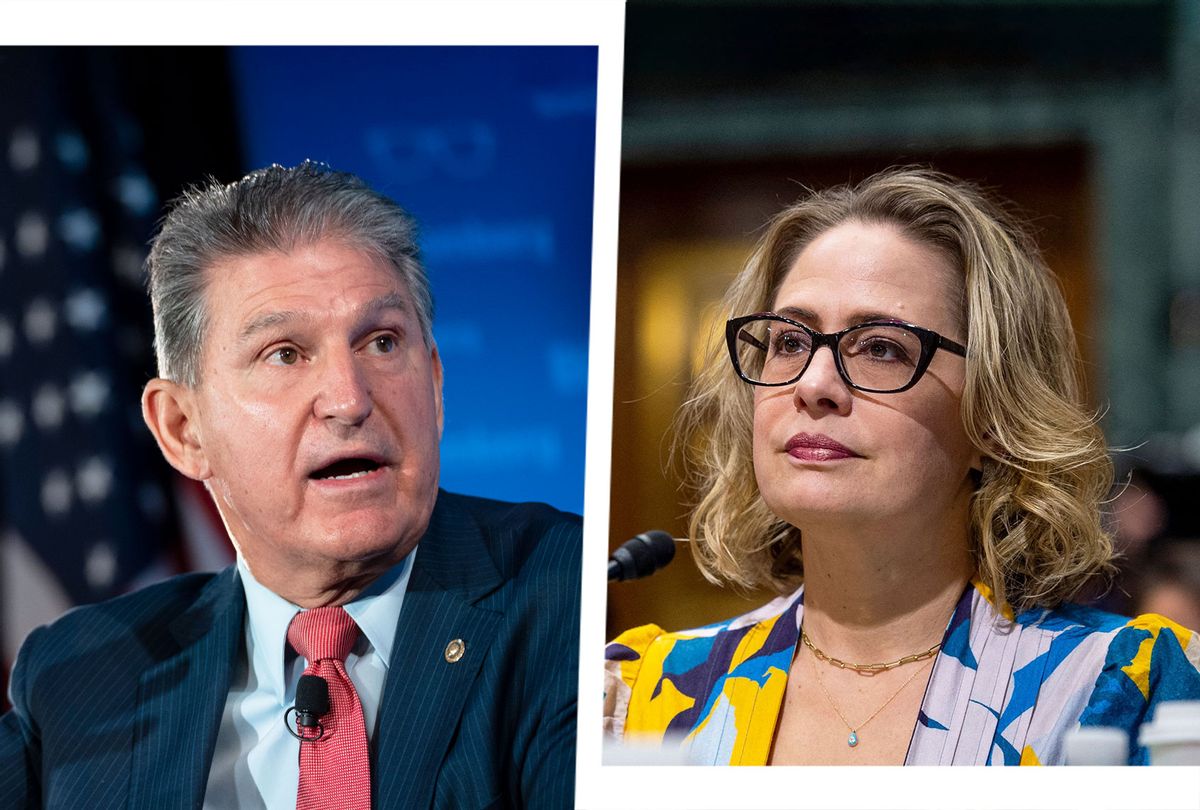 Progressive organizers in Arizona and West Virginia on Tuesday announced a joint protest targeting Sens. Kyrsten Sinema, D-Ariz., and Joe Manchin, D-W.Va., to demand they back ending the filibuster.

The activists announced a “Sit-In to Save America” rally, march, and nonviolent civil disobedience on May 23 in Tucson, Ariz., and Charleston, W.Va., to demand the two senators “stop their corrupt obstruction and end the filibuster so the majority can finally pass legislation to deal with the urgent crises that plague our nation.”

Organizers in a statement accused Sinema and Manchin of “protecting an abused, outdated Senate rule” and the “profits of their corporate donors over our people, our democracy and our planet.”

The organizers said the protest will “block business as usual” in “the great tradition of Dr. King, John Lewis, Cesar Chavez, Dolores Huerta, the suffragettes, the sit down strikers, and other freedom struggles” in order “to dramatize this emergency and make it impossible to ignore.”

Activists in the two states joined forces in response to the “continuing disgusting role of Senators Sinema and Manchin and the filibuster rule that maintains racism, oppression and the exploitation of labor,” Steven Valencia, the chair of Arizona Jobs for Justice and coordinating committee member of the Arizona Coalition to End the Filibuster, said in a statement to Salon. “Democracy is at stake and the moment is critical to change course for the benefit of working people and the planet. I will join friends in peaceful action and risk arrest to give voice to our demand of ending the filibuster.”

“Sen. Manchin’s obstructionism and support of fossil fuels are perilous to preserving our democracy, as well as our planet, and we cannot be silent about it,” Helman said.

Many of the activists involved organized previous efforts to protest the two senators, including two sit-ins at Sinema’s Phoenix office last summer and a Martin Luther King Jr. Day sit-in in Charleston to pressure Manchin. Activists frustrated with the Senate obstruction have also confronted Manchin on his yacht in Washington D.C. and Sinema at her teaching gig at Arizona State University and on airplanes.

Activists say their complaints have been ignored even as the senators routinely make time for corporate campaign donors.

“Straight from the heart, I asked Senator Sinema on an airplane to put people first last year. But like she’s done with nearly every voter who put her in office, she simply ignored me,” Karina Ruiz, executive director of the Arizona Dream Act Coalition and coordinating committee member of the Arizona Coalition to End the Filibuster, said in a statement to Salon. “It’s unacceptable. And it’s time to escalate with the power of solidarity. Arizonans and West Virginians are coming together to take on our obstructionist senators together.”

Democrats entered President Joe Biden’s term with his hopes to pass transformational legislation, including protections for workers and the LGBTQ+ community, a $15 minimum wage, a voting rights expansion and the Build Back Better package, which in its initial form sought to provide over $500 billon to fight climate change, lower drug costs, expand child care and elder care, and provide assistance for families. But Manchin and Sinema opposed key portions of the Build Back Better plan and their refusal to reform the filibuster has stalled the other proposals indefinitely amid united Republican opposition.

“How much more are we going to let the wealthy and powerful few hurt our democracy, our planet, and our neighbors?” Alexandra Gallo, the former organizing director for the West Virginia Working Families Party, said in a statement. “Enough is enough and we are sitting in to save America. Senator Manchin has demonstrated time and time again that he is not doing right by all West Virginians and we must do whatever it takes to hold him accountable. The time is now and the call to action is urgent.”

Manchin earlier this year reaffirmed his commitment to protecting the filibuster, wrongly arguing that it has existed in its current form for 232 years when it was actually established in 1975, two years after Biden was elected to the Senate. Sinema has also stood pat on her position despite being censured by the Arizona Democratic Party in January over her opposition. Despite ostensibly supporting voting rights legislation and other Democratic proposals, Sinema has argued that eliminating the filibuster would “deepen our divisions and risk repeated radical reversals in federal policy, cementing uncertainty and further eroding confidence in our government.”

The two senators have faced very different reactions from their constituents back home. Manchin, who represents a deep-red state that former President Donald Trump carried by nearly 40 points, has seen his approval rating soar 17 percentage points over the past year, doubling his approval among Republicans in the state to 69% compared to just 44% among voters in his own party, according to a new Morning Consult poll.

Meanwhile, a January Data for Progress poll found that just 19% of Arizona Democratic primary voters have a favorable opinion of Sinema, compared to 78% for fellow Sen. Mark Kelly, D-Ariz. Activists last year launched a crowd PAC to raise money for a potential primary challenger to Sinema and Rep. Ruben Gallego, D-Ariz., has emerged as a likely contender, besting his fundraising record last quarter and leading Sinema by a more than 50-point margin in a potential primary matchup.

But while neither senator is up for re-election until 2024, their obstruction of their party’s agenda threatens to cost Democrats control of Congress in November. Democrats in recent weeks have blamed Biden’s falling approval rating on congressional inaction and generic ballot polls have repeatedly shown that midterm voters are more likely to support Republican candidates than Democrats.

“The failure of the first filibuster reform vote and the collapse of Build Back Better aren’t a reason to give up — they’re a call to fight harder and smarter. Until we’ve seen millions of Americans join the fight for a progressive legislative breakthrough in 2022, it’s a lie to say we’ve done all we can,” Kai Newkirk, founder of For All and coordinating committee member of the Arizona Coalition to End the Filibuster, said in a statement to Salon. “And there is far too much at stake for our nation and planet not to draw on the nonviolent civil resistance lessons of victorious movements worldwide and put our bodies on the line together to try to make the political costs for Sinema, Manchin, and all who continue to block the will of the American majority unbearable.”

How bad could this be for down-ballot Democrats? Pretty bad: But there’s hope