Jimi Lawal, former Managing Director of Alpha Merchant Bank, a serial fraudster, has expressed his interest to contest in the 2023 governorship election in Ogun State.

Lawal, some years ago duped investors and ran overseas. He was convicted in absentia in Nigeria for criminal acts, a divorcee in the United States of America, believed to be wanted there for tax matters, however, returned to the country in 2006 to be appointed as a consultant to the then Minister of the Federal Capital Territory, Nasir El-Rufai, current Kaduna State governor.

SaharaReporters learnt that Lawal, in preparation for the 2023 governorship election, obtained the nomination form of the Peoples Democratic Party on Thursday.

A source said he is being sponsored by the Rivers State Governor, Nyesom Wike and his Oyo State counterpart, Seyi Makinde.

Lawal is not the only aspirant in Ogun State as Ladi Adebutu had already shown interest in the governorship race, also under the same platform of the PDP.

Meanwhile, this is not his first attempt in the governorship race. Lawal contested in 2018 under the All Progressives Congress but was edged out.

Unsatisfied with the outcome, Lawal at the time petitioned Comrade Adams Oshiomole, who was then the National Chairman of the APC, his party, as he described the governorship primary in Ogun APC as a charade.

Lawal entered into banking and national prominence in 1988 when he became the managing director of Alpha Merchant Bank. Within seven months of commencing operations, Alpha had posted a profit of N7 million. But with this sweet story also came a streak of scandals, about Lawal.

As it has turned out, scandals have become a permanent feature in Lawal’s life. Barely two months after Alpha took off, on 4 August 1988 specifically, two of its shareholders fired a petition to Abdulkadir Ahmed, then Governor of the Central Bank of Nigeria, CBN, alleging forgery against Lawal.

The shareholders, A.O. Ilori, a lawyer and I.O. Odefisayo, a chartered accountant, in their letter titled, “Fraudulent Practices at Alpha Merchant Bank Limited”, accused Lawal of falsifying the information in his curriculum vitae that he submitted to the CBN and the Federal Ministry of Finance. In the CV, the Alpha boss claimed to be a Master of Business Administration, MBA, product of the City University Business School, Barbican, London.

He also wrote that he was a Departmental Manager at the Foreign Exchange, Bills/Credits Department of the Union Bank in London.

The petitioners declared that Lawal did not possess an MBA from City University, neither was he a manager at Union Bank. The banker, they stated, was a mere supervisor at the London bank, a position that did not qualify him to be approved by the CBN as Executive Director in any bank in Nigeria.

“The obvious implications of these fraudulent practices,” Ilori and Odefisayo alerted, “is that the CBN has not only been deceived by Jimi Lawal in approving his appointment as an Executive Director on the basis of the purported qualifications and working experience, but it further constitutes a fraud on innocent shareholders at whose expense Jimi Lawal has taken benefits by way of remuneration and perquisites of office.”

Also, another suit was filed against the erstwhile Alpha Bank managing director. Jide Zaid, a lawyer in Omisade Chambers, headed to court to file a suit against Lawal, alleging forgery and threat to his life.

This suit confirmed the talk abroad then that all was not well between Lawal and Michael Omisade, whose chambers did the incorporation of Alpha Merchant Bank. Omisade, at the time had expressed fears about the future of the bank when he found out that “Lawal was not what he smoothly talked him into understanding he was.”

As Ilori and Odefisayo earlier did, Zaid also proceeded to tear Lawal’s CV apart. Omisade’s chambers, on 10 August 1988, wrote to Alhaji H.T. Ashiru, Principal of Muslim College, Ijebu-Ode, which Lawal claimed to have attended between 1970 and 1975 and bagged seven papers in the West African School Certificate examinations, for confirmation.

Ashiru’s prompt response gave the lie to Lawal’s claims. The Principal wrote: “Mr. Shakiru Olajimi Adebisi Lawal attended Ijebu Muslim College, Ijebu-Ode, and was in Class Four in 1975. In fact, we discovered that he repeated the class in 1975 and was advised to withdraw at the end of the session in November 1975 when he was unable to gain promotion to Class Five.

In another letter dated 12 July 1988 by Omisade Chambers to Mrs. A.A. Fashina, then Principal of King’s College, Lagos, her reply was: “We have carefully gone through our records and discovered that at no time was there any student by name Shakiru Olajimi Adebisi Lawal. Moreover, I wish to confirm that King’s College has never run a part-time programme for either WASC or HSC course.”


Lawal had claimed in his CV that he did a part-time HSC programme at King’s College, Lagos, from 1976 to 1977 where he obtained four GCE “A” Level passes.

From City University School, London, where Omisade Chambers had written to concerning Lawal’s claim of an MBA came another disclaimer on 21 July 1988. Kate Adam, Course Secretary for the school’s evening MBA programme, wrote back to state that although Lawal had begun the university’s part-time MBA degree course in September 1983, he was not awarded an MBA because he withdrew and did not complete it.

When Zaid also requested from Union Bank in London to clarify Lawal’s status while he worked there, the feedback was another shocking expose: “Mr. Lawal was employed by this branch as a Supervisor (Documentary Credits) from June 1984 to August 1986, and not a departmental manager. Supervisory positions are not on the senior management cadre of this bank nor of the bank as a whole.”

Somehow, Lawal, who has, over time, proven to be the replica of Houdini, the character reputed for wriggling out of the tightest of jams, squirmed out of the legal wranglings, courtesy of spirited intervention by some highly-placed Nigerians who prevailed on the warring parties to settle out of court. Lawal’s claim of being 31 years old when he emerged Alpha’s managing director could not but also come into dispute.

The controversial banker was born in September 1959. Effectively, he could not have been more than 29 years when he became Alpha’s MD in 1988. This was a year shy of the 30 years minimum age requirement that the CBN prescribed for anybody aspiring to be managing or executive director of a bank.

The judgement of the Failed Banks Tribunal that indicted him may have been set aside for “lack of jurisdiction,” by the Federal High Court, Lagos, but the burning issue of the malpractices that led to the crash of the bank and the unmitigated sufferings of its depositors cannot but subsist.

It was not until 1995-1996 when the sordid deals at Alpha were exposed at the Failed Banks Tribunal that an aspect of Lawal’s improprieties was exposed. According to the facts of the charge, No. FBFMT/L/ZII/IC/95, Lawal conspired with Udensi, a major shareholder in the defunct bank, to perpetrate some underhand deals that eventually contributed to sinking the bank. Both Udensi and Lawal later jumped bail and fled the country to avoid trial. They were subsequently tried and sentenced to terms of imprisonment in absentia.

Interestingly, Udensi’s wife, Joy would later prove she was tarred with the same despicable brush as her husband when, as chairman of Citizens International Bank plc, she was found out by the CBN to have engaged in sharp practices.

However, before further action could be taken against her, she bolted from the country. She was believed to have joined her husband in the Republic of Benin where he hibernated for some time after fleeing Nigeria. 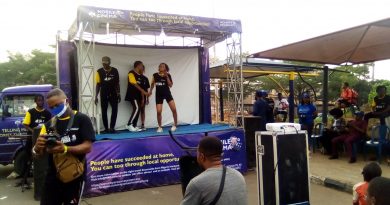