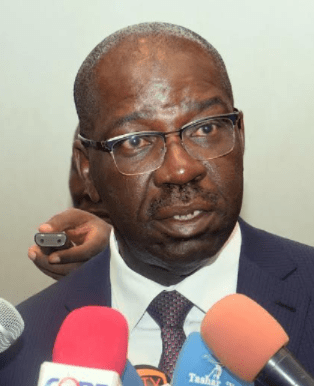 BENIN-CITY—EDO State chapter of the Peoples Democratic Party, PDP, has called on Governor Godwin Obaseki to restore the traditional institution of Uromi in Esan North East Local Government Area of the state by re-calling the deposed monarch of Uromi, HRH Anselm Eidenojie 1.

It will be recalled that former Governor Adams Oshiomhole had on November 9, 2016, deposed the Onojie of Uromi in pursuant to Section 28 (i & ii) of the Traditional Rulers & Chiefs Law, 1979 after the expiration of seven days suspension slammed on the monarch by the state government.

The Onojie was first suspended in October 2016, for allegedly assaulting one Betty Okoebor, during the conduct of the September 28, 2016 governorship election.

He was also alleged to have travelled outside the country without permission and disregard for constituted authorities by refusing to answer query issued to him.

Speaking yesterday at a town hall meeting in Uromi, State Chairman of the PDP, Chief Dan Orbih, said Obaseki must stop playing politics with the traditional institution of Uromi. Orbih said it was wrong for Uromi indigenes to continue to support the party that deposed their king.

He urged the people not to remain in the APC, when their monarch’s deposition was yet to be lifted.

On his part, Bishop Antony Okosun described Uromi as the garden of Eden of the PDP.

He said there will be no peace for those that refused to recall their king.

When everything you planned for changes in seconds