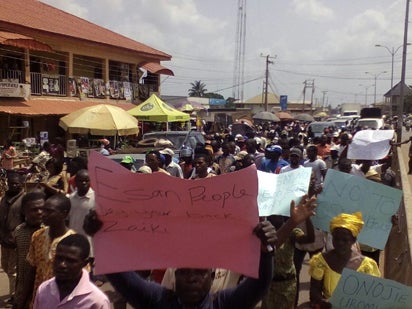 *Why Esan people want him re-installed

A month before Comrade Adams Oshiomhole   stepped aside as Governor of Edo State, the Ishan section of the state otherwise known as Esan Land, exploded into turmoil following the deposition of the Onojie of Uromi, His Royal Highness Anselm Aidenojie 11, the traditional ruler of the Uromi Kingdom.

This came after the then Governor Oshiomhole had issued a month long suspension to the Onojie, which was later reversed to one year.

The decision to depose the Ojuromi of Uromi was, according to a government statement, in pursuance to Section 28 (i & ii) of the Traditional Rulers & Chiefs Law, 1979. The state government had earlier suspended the Onojie for seven days with a condition to apologise to one Mrs Betty Okoebor, who had accused the traditional ruler of physical abuse.

The letter took effect from October 26 and lasted till November 1. The suspension from office was said to be based on the following reasons, among others:
*”Your unprovoked attack, inflicting grievous bodily harm on one Mrs Betty Okoebor on September 28, 2016 in full public glare to the embarrassment of those present and causing disgrace to your otherwise esteemed office.
*”Your refusal, even after two weeks, to respond to a query issued by the appropriate authority within the stipulated 72 hours, demonstrating total disregard and disrespect for constituted authority.
*”Travelling outside the country without appropriate permission in further demonstration of your disregard for extant regulations and laws,” it read.

The genesis of the crisis

The crisis had been traced to a misunderstanding which erupted a couple of months ago, when His Royal Highness refuted, through a statement, claims attributed to him in the media that he had expressed distrust in the Edo State governorship aspirant of Peoples Democratic Party, Pastor Osagie Ize-Iyamu, due to the party’s track record of under-development in the Esan community.

According to the statement: “Let it be noted that the Onojie of Uromi had never said during the visit of Governor Adams Oshiomole and his entourage to the Palace that he does not trust Pastor Osagie Ize Iyamu to be the Governor of Edo State, but rather Ize Iyamu was welcome to his palace 30 times a day if he wanted because they are personal friends.”

According to Mr. Festus Okoebor, who said he was present at the scene which led to the crisis said:

“We voted in Units 8 and 9 of Ward 4, Esan North East Local Government Area of Edo State on that fateful day.

“While we were there casting our votes, we observed an APC member being arrested by security agents; there was a lot of tension. It was at this point that  His Highness came in and said he received a call from somebody who said there were issues going on in that polling unit. Customarily, when the Onojie steps into a crisis, the people ‘sheathe their swords’ as a mark of respect.

“At that polling unit, both my brother and sister were the APC agents collating their data. The Onojie went straight to my brother and placed his hand on his shoulders. All of a sudden my sister started video-taping the conversation between His Highness and my brother Matthew Okoebor. The Onojie was infuriated by the act and knocked the phone away from him.

“My sister responded by insulting the Onojie. We begged His Highness to forgive her and he left the area. There was no time the Onojie slapped my sister as alleged by former Governor Oshiomhole.

“After the incident, she went to plead with the Onojie for forgiveness and the royal father promptly forgave her and prayed for her right in the palace.

“But later on, we heard that the governor suspended and later deposed the Onojie because of that incident. To us, it is a sacrilege and disrespect to traditional leadership, because the Onojie is not appointed, being a hereditary position and cannot be dethroned unless by death.

But eminent sons and daughters of Esan land in Edo State were quick to condemn the deposing of the Onojie of Uromi. And they have called on the newly inaugurated Governor Godwin Obaseki, to toe the path of peace and re-install the king to his throne in order for peace to reign in the state.

Speaking during a solidarity visit to the palace of the Onojie, after series of solidarity protests by neighbouring communities, Senator Clifford Odia, representing Edo Central Senatorial District, said the suspension of the king is uncalled for. “For me, the purported removal of His Highness is very callous and was taken in bad faith. That is why we have come to appeal to Uromi people to be calm until the resolution is made,” he said.

According to him, the former governor’s action was not only an insult on the people of Esan but an attempt to desecrate the exalted throne of the Onojie as well as an attempt to cause disunity among the Esan people.

Speaking on their mission to the palace, he said: “We have come out in clear terms to condemn this action because it is politically motivated.”

On steps he and his compatriots intend to take to resolve the on-going crisis, Senator Odia said: “The matter is currently at the court and the decision would be taken as due, but we have not ruled out the possibility of engaging with Governor Obaseki to bring normalcy to the current crisis.”

On how to resolve the issues, he noted thus: “The way forward is for the government to listen to the people. We are calling on the Governor of Edo State to rescind the decision taken to dethrone the Onojie. We are very angry.”

An act of God

Commending the visitors for the visit, Chief Okosadoh Okoh, the Eni of Uromi Kingdom, noted thus:  “What has happened may be an act of God; this will help us to be more united as a people and forge ahead.“  He assured the visitors that the ancestors of Uromi Kingdom will not allow their kingdom to be desecrated, but will help to fight to restore the king back to his throne in no distant time.

Speaking, Sergius Ogun, argued thus: “In many parts of Nigeria, traditional rulers are chosen from Ruling Houses and crowned with such rulers deriving their legitimacy and powers from the Traditional Council or King Makers. This is clearly not the case in this instance since the Ojuromi derives his legitimacy and powers from God; as our people say, the Onojie of Uromi is born and not made.

“The procedure of coronation and presentation of staff of office by the state government is more procedural than substantial because from the moment the crown prince is born his destiny has been decided since it is universally accepted that he and only he can succeed the reigning Onojie to the throne.

“The Traditional Rulers and Chiefs Law of 1979 was an offshoot of the Colonial mentality which did not recognise the power of the people to choose their own rulers and encourage the attempts by the colonialists to use the traditional rulers as tools for indirect rule. Any traditional ruler who refused to play ball was deposed or exiled and replaced by someone more amenable to the colonial interests.

“This worked in a lot of instances because of the succession process but it was resisted by the people then and any attempt to enforce a law hinged on the same principles will most likely suffer the same universal condemnation.”

Meanwhile, in a bid to help pacify angry nerves as well as preventing the situation from resulting in full blown anarchy, Chief Philip Idemudia (the Adia of Uromi) and the National President of Uromi Community Association, immediately convened an emergency meeting of the people at the palace.

He noted that “Ms Batty Okoebor as a daughter of Uromi land had been fully aware of the customs and traditions of our people had immediately done the needful by going to the residence of  His Royal Highness in Benin to tender her apology and beg his forgiveness.

He explained that “the people of Uromi are peace loving people who would always listen to the voice of reason and wisdom.”

Nigeria: We’ll Not Exchange Our People’s Resources for Peace in Edo – Obaseki – AllAfrica.com 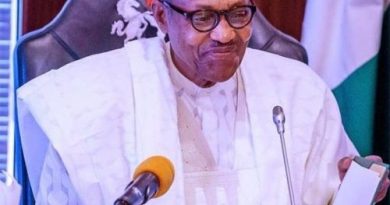 The council of state should meet now – Vanguard