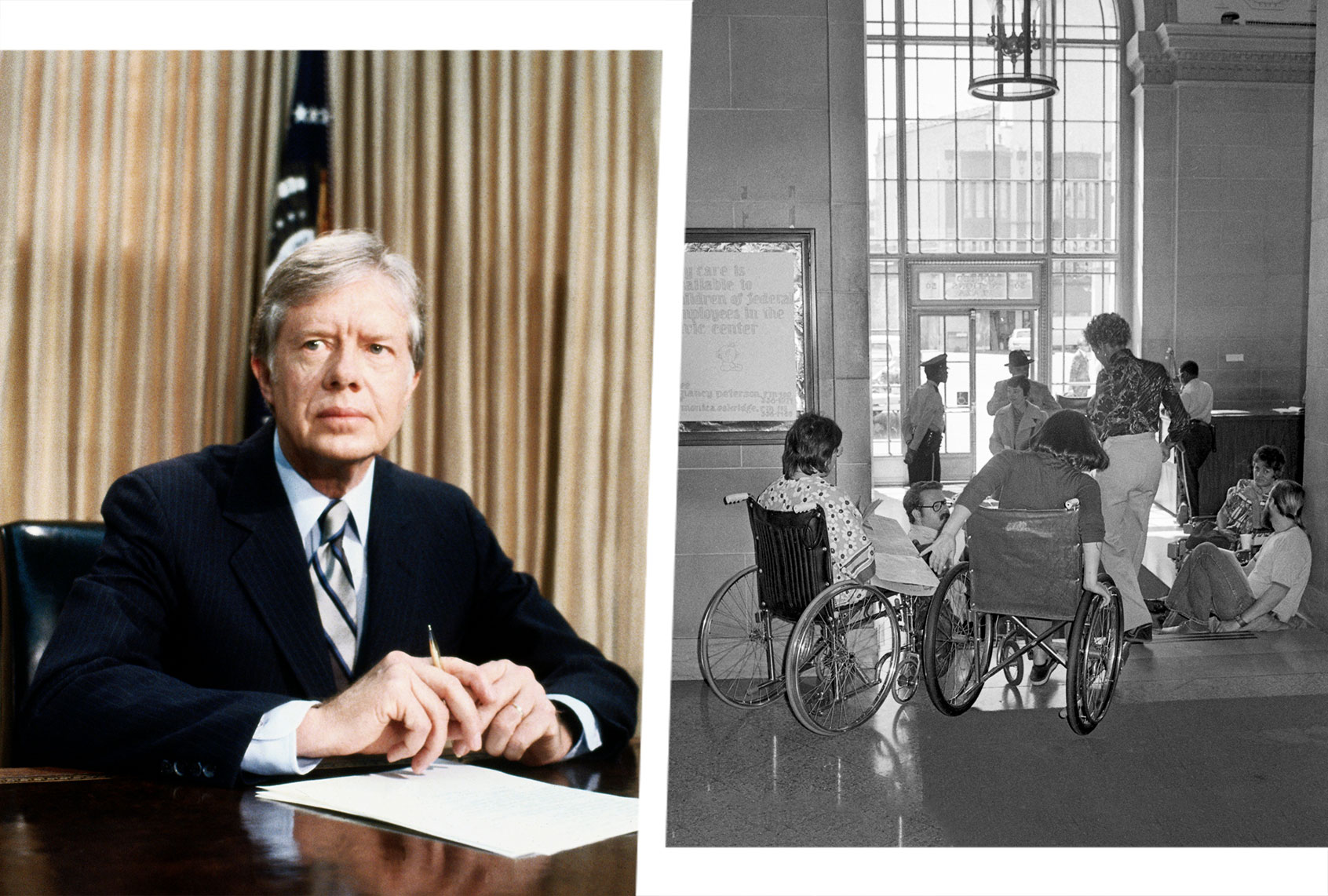 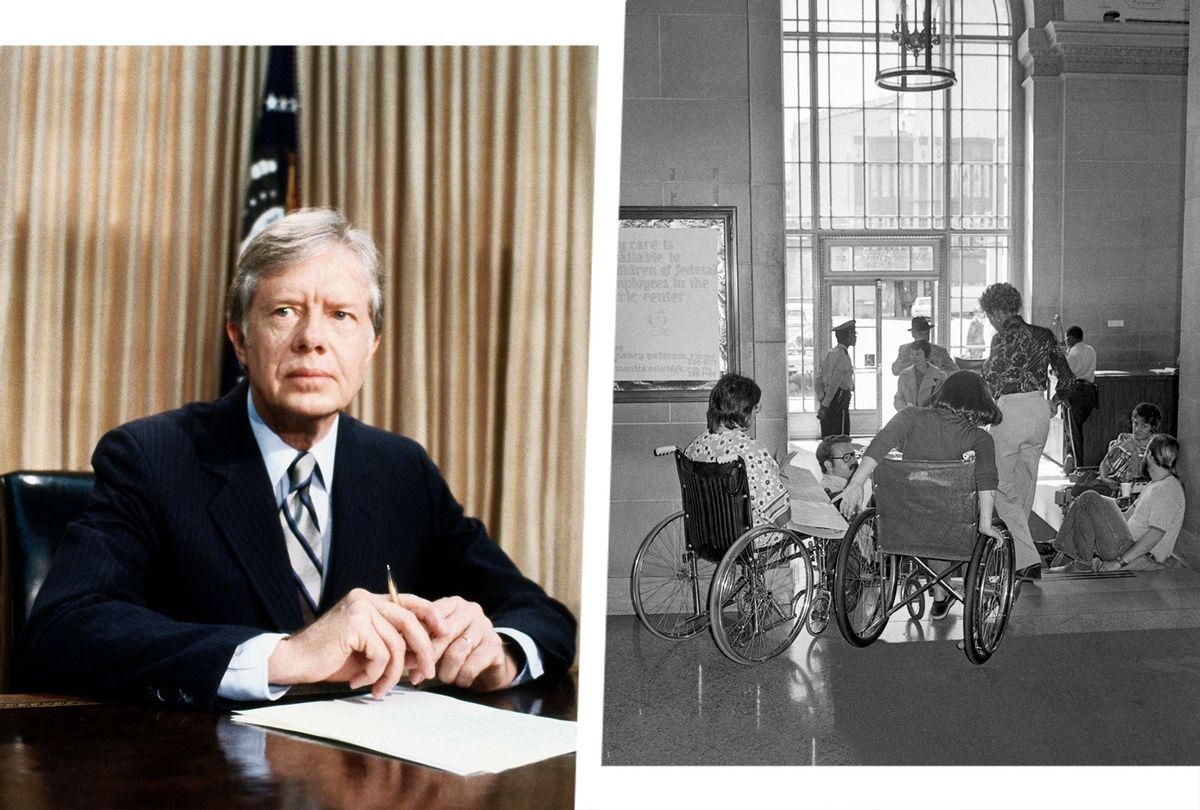 Standing up could be intensely painful for Franklin D. Roosevelt, but he was determined that the public would never know.

Roosevelt was paralyzed from the waist down in 1921 — it’s not clear whether that was caused by polio or Guillain–Barré syndrome — and went to great lengths to conceal his disability. Aside from his inner circle of confidants and journalists who covered his political career, few Americans ever understood that FDR, who became the longest-serving president in our history, could not stand or walk unaided. He stood upright only with clunky, awkward braces that placed constant pressure on his abdomen. Yet he bore this burden silently, and when necessary went above and beyond the non-disabled people around him.

One incident stands out: A moment during the 1932 presidential election when Roosevelt remained standing during an unexpected rainstorm, even as everyone around him ran for cover. This was more than showmanship, although it certainly helped his public image as he campaigned to defeat President Herbert Hoover that year. Roosevelt, at the time governor of New York, also remained standing in order to doff his hat to every National Guard platoon commander who passed him on parade. More than a quarter-century later, a Hungarian Jewish immigrant who was a corporal in the 71st Infantry at the time wrote a letter to Eleanor Roosevelt recalling what he had observed (the former First Lady replied with gratitude):

I noticed that all of the occupants in the car had covered their heads or were endeavoring to ward off the rain, but there stood President Roosevelt, hat over his heart, the rain beating down over him, never flinching, every inch a man. This was an example of military, moral and spiritual courage. I have never forgotten it.

That infantry corporal almost certainly didn’t know that Roosevelt had a significant disability, and was essentially standing there locked in place. Disabled people throughout history have had to make those kinds of sacrifices, or cover up their limitations even at risk of pain or injury, simply to function in society.

Roosevelt’s suffering was not for nothing. Among other things, he founded a comprehensive disability treatment facility in Warm Springs, Georgia, which today is named for him. Over the years, Warm Springs has become a political mecca for aspiring public officials and others who wish to express support for the disability rights movement. When another Democrat, Jimmy Carter, decided to establish himself as a supporter of disability rights during the 1976 presidential election, he visited Warm Springs to make that promise. After he was elected president, however, Carter often struggled to implement key parts of his agenda, and disability rights was no exception. So disabled people had to step in to do the work that the non-disabled simply couldn’t get done on their own.

Prior to Carter’s presidency, disability activists had struggled to convince government officials to take their concerns seriously. When Congress in the early 1970s passed a law to expand states’ abilities to provide comprehensive vocational rehabilitation services, a staffer at what was then called the Department of Health, Education and Welfare (HEW) added a few sentences protecting disabled individuals from discrimination. No one expected that to be controversial; it was worded to resemble the Civil Rights Act of 1964, and merely extended that bill’s logic and language to another marginalized group. Yet this provision, known as Section 504, would become the cornerstone of a massive controversy and an entire movement. It stated that any entity that received federal funding could not discriminate against disabled people, at risk of losing that funding.

Richard Nixon and his successor, Gerald Ford, weren’t especially sympathetic to Section 504, and supported the arguments of business advocates who claimed it was unenforceable and overly expensive. At first Republicans wanted to kill the bill entirely, with Nixon vetoing two versions, in 1972 and 1973, because he thought the Section 504 language was too strong. After the first veto, a group of 80 disability activists in New York, many in wheelchairs, protested by stopping traffic on Madison Avenue. Eventually there was enough pressure from Democrats (who controlled Congress at the time) to compel Nixon to sign the law, but both he and Ford delayed implementing it. Even after a judge ordered the Republican administration to cease “unreasonable delays,” regulations needed to implement the law remained unsigned through the end of Ford’s tenure.

Activists were heartened when Carter took office because, starting with his visit to Warm Springs in 1976, he had cast himself as their ally. While Carter’s heart was in the right place, he often waffled when it came to following through on his goals — not a problem of intention, perhaps, but conceivably one of competence. Carter wound up passing the buck on Section 504 to his new HEW head, Joseph Califano, who formed a task force on the issue — that included no people with disabilities.

Around that time, activist and advocacy groups run by people with disabilities were emerging, and a number merged into the American Coalition of Citizens with Disabilities. The coalition found out that Califano’s task force was likely to weaken the regulations needed to be implemented Section 504, in an effort to strike a compromise with the business community. So the ACCD told the Carter administration it would launch a series of protest actions if the existing regulations weren’t signed unchanged.

“I think this was brilliant, because rather than waiting until watered-down regulations were issued publicly and then responding, issue by issue, this meant the government would have to respond to the demonstrators,” wrote Disability Rights Education & Defense Fund activist Kitty Cone, who participated in the protests. “Additionally, it was not that easy to organize people, particularly people with physical disabilities, in those days, due to lack of transit, support services and so on. A sit-in meant people would go and stay, until the issue was resolved definitively.”

So began the 504 sit-ins, in which activists organized by the ACCD either occupied or picketed HEW offices in Washington, Atlanta, Boston, Chicago, Denver, Los Angeles, New York, Philadelphia and Seattle. Like Roosevelt forcing his body to remain standing in the rain, the protesters willingly underwent physical and emotional pain because they believed they were doing so for a just cause. The most notable protest was a San Francisco sit-in that lasted more than three weeks. One of the organizers, activist Judith Heumann, recalled that “at the start of our demonstration at the HEW offices, officials treated us with condescension, giving us cookies and punch as if we were on some kind of field trip.”

Once authorities realized that the protesters really weren’t going to go home, the magnitude of the moment became clear. This was a highly diverse group of people with different kinds of disabilities: injured Vietnam veterans, lifetime wheelchair users, deaf people, blind people, individuals with mental disabilities. Asking the cops to roust them out of the building would have been terrible optics. Carter’s administration was in a bind. More important still, this was effectively the first moment that Americans in general were compelled to confront their condescension and lack of comprehension when it came to disabled individuals. Cookies and punch weren’t going to cut it.

As one activist later recalled, “discomfort and anxiety was the order of our day to day existence. Everyone faced these questions, How can I get my meds? Where will I sleep? What about food?” People lost their sense of privacy as they performed intimate personal care in close proximity to strangers. Two protesters suffered long-term exacerbation of their multiple sclerosis symptoms because of going for a prolonged period without treatment. People had to live without catheters, back-up ventilators and medicines. The food problem was mitigated for one reason: Black Panthers stepped in and made sure the protesters, at the very least, would not starve.

It worked — and to a greater degree than most activists expected. In the most immediate triumph, the Section 504 regulations were signed intact on April 28, 1977. From that moment on, the climate around disability in America was forever transformed: No longer could an employer fire a disabled person just because having them around was too much trouble, or made others uncomfortable. While the stereotype of disabled people as helpless is still with us, the Section 504 protesters demonstrated that they could fight for their rights just like anyone else. Furthermore, they accomplished that by establishing an alliance based on the premise that everyone with a disability was in the same boat, regardless of the specifics. Finally, Section 504 laid the foundations for the landmark bill that would arrive more than a decade later, the Americans with Disabilities Act of 1990.

I am an autistic person with a hand-eye coordination disability, and am among the millions of beneficiaries of the Americans with Disabilities Act, and by extension of Section 504. I am also the grandson of the Hungarian Jewish immigrant who saw Franklin D. Roosevelt standing through that rainstorm, and was so impressed in 1932 when he witnessed Roosevelt’s inspiring act of physical sacrifice during that rainstorm. I never met Laszlo Rozsa, who died three years before I was born. I know he was head of the proof room at the New York Times, working the “lobster shift” and continuing the family tradition of newspaper jobs that began with his father, a Budapest printer named Mores Rozsa. Laszlo’s only child, Lance Rozsa, worked in education rather than journalism (he became a school superintendent in New Jersey). My passion is for both: I’m a PhD candidate in history at Lehigh University and I’ve been a journalist for 10 years (and a staff writer at Salon for six).

When I interviewed Jimmy Carter in 2018, I thanked him for his support of Section 504 and for what he had done for the disability community. I also asked him what advice he had for younger Americans today. He responded: “Never give up, and follow the advice of my school teacher: ‘We must accommodate changing times but cling to principles that do not change.'”

“A long line of workaholics”: How Americans can fight for a “balanced approach to work”

Experts: These churches violate law by endorsing candidates — should have tax-exempt status revoked