It’s like the old joke about buses: you wait hours for one, and then two come along at once. Except in reverse. Italy went 60 years without missing a World Cup and now, after Thursday’s 1-0 playoff defeat to North Macedonia, they’ve missed the last two buses to the biggest show on Earth.

It might feel jarring that the side that won the European Championships just eight months ago, the team that, before Thursday night, had lost just one of its previous 39 games (setting a world record unbeaten streak along the way) should go out to North Macedonia (population: 1.83 million, FIFA ranking: 67), but that’s the basic nature of this sport and, specifically, World Cup qualifying. (At least that’s the case in Europe, where a whopping 13 countries get to qualify.)

Assuming you’re not particularly lucky, you have a certain margin for error. You can screw up once, twice or three times… and then you pay the price.

Italy would have cruised through their qualifying group, taking 22 of a possible 24 points, and would have been watching these playoffs on TV if not for three craven errors in three games they comfortably dominated: missing penalties against Switzerland home and away, and conceding a silly goal to Bulgaria. Three wins that turned into draws: any one of those stays a win, and you’re not reading this column right now.

Still, they controlled their own destiny against North Macedonia. And again, they took a ton of shots (32, 19 of them blocked), enjoyed a ton of possession (70%), but failed to put it in the net before the opposition scored a worldie in injury time.

That’s also part of the appeal of this game: goals are rare, the outcome often hinges on moments that have outsized importance. It means that North Macedonia can travel away to the European champions — who have never, in their history, lost a World Cup qualifier at home — without arguably their best player (the suspended Elif Elmas) and win with a game plan consisting of staunch defending and an improbable wonder strike in injury time. It’s the drama we crave.

What does it mean for Italian football? It means another round of heartache after the 2018 World Cup qualifying debacle against Sweden. It means embarrassment and pain that Euro 2020 will only partly mitigate. It’s a bit like eating ice cream when you have kidney stones. It tastes good, sure, but it still hurts like hell down there.

But here’s what it doesn’t mean. Much as it’s often the knee-jerk reaction of the media and the commentariat, it doesn’t mean Roberto Mancini should lose his job. This is not one of those situations where people can point to evident mistakes: players not called up who should have been there, substitutions that backfired, formations that didn’t work.

Nor should it mean that, all of a sudden, because of this result, Italy is heading in the wrong direction. These things don’t hinge on a missed penalty (or two, in this case). You evaluate the health of a national development system on the football it plays and the players it produces.

The former has changed, most definitely for the better. The days of Italy sitting back, absorbing pressure and nicking goals at the other end are over. Very few successful teams play that way (at club or international level) and not only has Mancini changed that mentality, but it’s percolated down to the younger coaches in Serie A and Serie B. They try to emulate Jurgen Klopp and Pep Guardiola, not the mega-catenaccio crew of yesteryear.

As for the latter benchmark — producing players — there are two points to make. First, it’s what you call a lagging indicator. The effects of changes you make today — in youth coaching, development, infrastructure — won’t be felt for another five to 10 years. A lot of changes were made after Italy’s 2014 World Cup first round exit and, again, after the 2018 debacle. Some are starting to bear fruit in the form of promising youngsters, some may do so down the line, some may never work out. But bear in mind that, when judging a current generation and how they came through, you’re always looking into the past.

Second, there’s a degree of randomness to all this when it comes to talent.

North Macedonia fans celebrate wildly in the capital of Skopje after knocking Italy out in their World Cup qualifier.

When Italy won the World Cup in 2006, Marcello Lippi’s corps of forwards included Alessandro Del Piero, Francesco Totti, Pippo Inzaghi, Luca Toni and Alberto Gilardino — some of Italy’s greatest-ever strikers and guys who spent most of their careers at big clubs competing for big trophies. Mancini’s options against North Macedonia, were, with respect, Ciro Immobile, Lorenzo Insigne, Domenico Berardi, Giacomo Raspadori and Joao Pedro. It still should have been more than enough to win on Thursday, but not quite the attacking stardust of past sides either. And, especially for a team that demands the ball and takes tons of shots, having the odd superstar in there can make all the difference. Sometimes you have to accept the fact that generational talents — as the name implies — are born, not made.

Maybe the truth is a little simpler and a tad more boring. Italy weren’t the best team in Europe when they won Euro 2020, but they still deserved to win it because, for a month, they played some of the best football without having some of the best players. And they’re not a worse team than Switzerland (who are going to the World Cup) and North Macedonia (who, Cristiano Ronaldo permitting, might join them in Qatar), but because individual players made critical mistakes in key moments they still deserve to go out.

Either way, Mancini’s direction of travel is the correct one. At least 12 years will pass between their last World Cup game (the 2014 Luis Suarez-biting-Giorgio Chiellini game in Brazil) and their next one (2026). But if they stick with this blueprint, they can come back stronger. 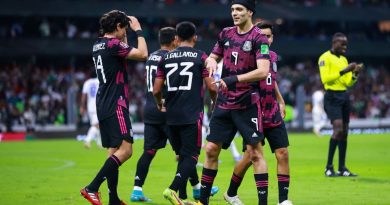