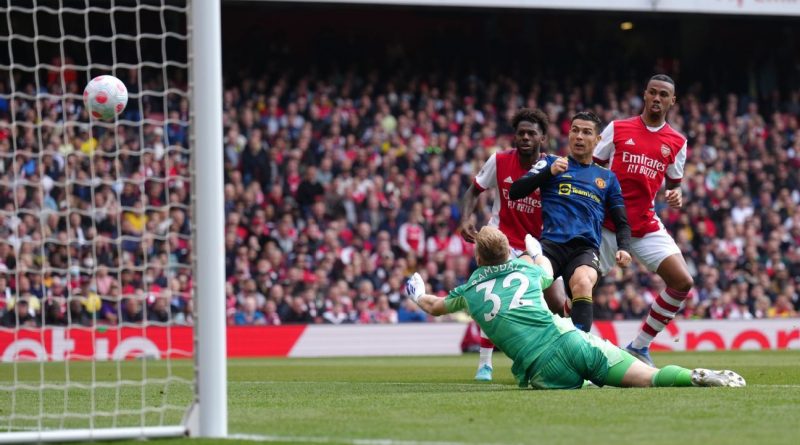 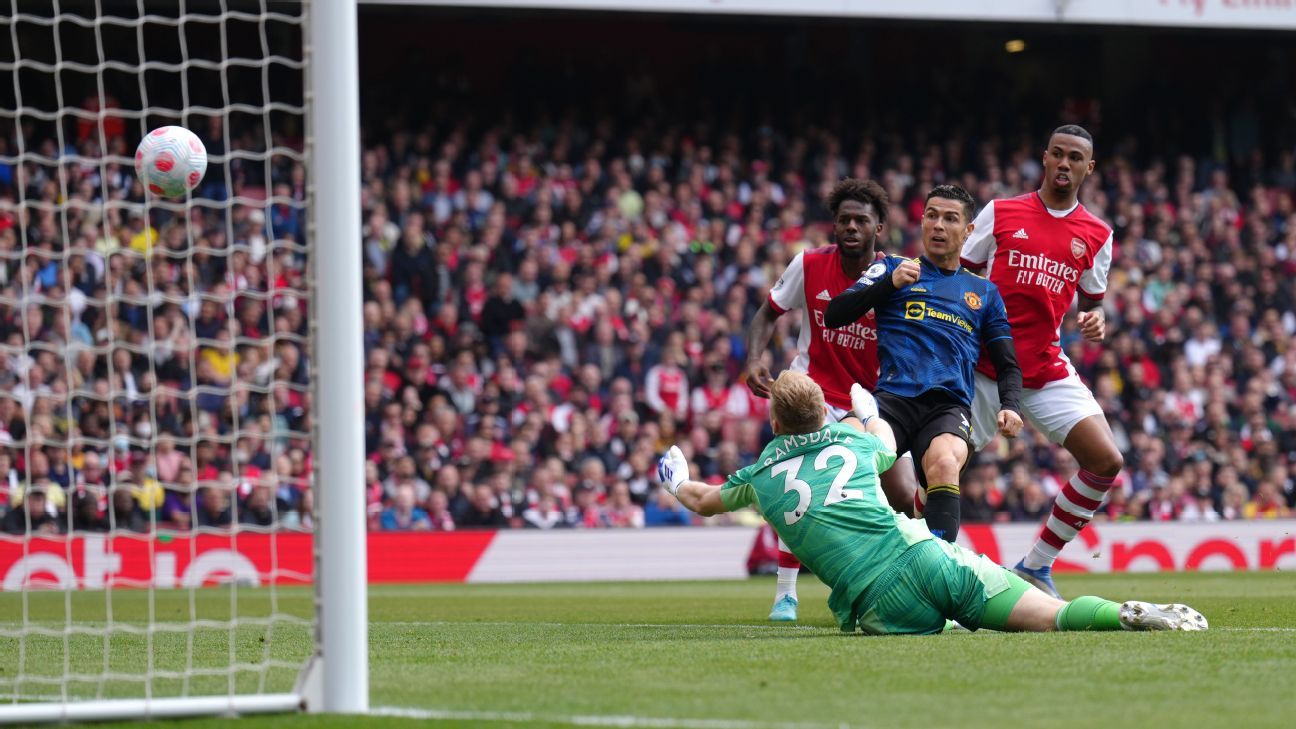 Cristiano Ronaldo became the latest member of the Premier League‘s 100 Club when he scored for Manchester United at Arsenal on Saturday.

Ronaldo officially hit triple figures in the English top flight some 6,748 days after he opened his account during his first spell at United as a teenager way back in 2003.

The 37-year-old had moved on to the cusp of the milestone in his last outing, when his hat trick against Old Trafford last Saturday secured a 3-2 win over Norwich City.

And he sealed his century in the 34th minute at the Emirates when he stole between two defenders to fire home Nemanja Matic‘s cross from close range.

That strike makes him the 33rd player to score 100 or more goals in the Premier League, and the fourth to do so for Manchester United.

The Portugal captain is now behind only Wayne Rooney (183), Ryan Giggs (109) and Paul Scholes (107) when it comes to United top scorers in the history of the competition.

To mark Ronaldo bringing up his Premier League century, here’s our pick of his 10 finest efforts in the competition.

Hardly a classic, but notable for being the first of Ronaldo’s century of Premier League goals. Having just become the most expensive teenager in world football, it took the 18-year-old Ronaldo 11 league appearances to get off the mark, which he finally did in a 3-0 win over Portsmouth at Old Trafford. The seminal moment came 10 minutes from the end as Ronaldo, who had only just come on as a late substitute, drilled a free kick past Shaka Hislop to score United’s second goal of the game and his first in English football.

Run ✅
Finish ✅@Cristiano‘s late winner secured all three points for us at Fulham in 2007! pic.twitter.com/GfGuo1Lb86

Table-topping United had arguably been outplayed by hosts Fulham on the banks of the River Thames as the game appeared to be heading toward a fairly ordinary 1-1 draw. However, cometh the 88th minute and cometh the man as Ronaldo sparked to life to settle the game in United’s favour with a moment of individual brilliance that had Sir Alex Ferguson leaping up and down on the touchline. Taking possession wide on the left flank, the winger scampered in toward the edge of the box and let fly with a low shot that clipped off the boot of defender Phillipe Christanval on its way into the back of the net. The win, scarcely deserved, elevated United nine points above rivals Chelsea and the rest of the chasing pack at the summit on their way to clinching the 2006-07 title.

While he may have become an unstoppable hat trick machine at Real Madrid, this was the only one Ronaldo scored in his first stint at United. Goalless at half-time against manager-less Newcastle United in early 2008, Ronaldo broke the deadlock with a daisy-cutter free kick just five minutes after the restart, then scored twice more as United well and truly steamrolled their 10-man opponents to the tune of 6-0.

Undoubtedly the best of the three free kicks Ronaldo has scored against Portsmouth came as part of a dazzling three-minute barrage that saw him get both goals in a 2-0 victory at Old Trafford in 2008. Having opened the scoring in the 10th minute, the reigning PFA Player of the Year doubled his tally in the 13th when he lashed a powerfully swerving dead ball past a flummoxed and motionless David James from 25 yards out.

Ronaldo got the ball rolling at Old Trafford as United stunned visitors Aston Villa to go six points clear at the top of the Premier League with a 4-0 victory. As if to encapsulate the attacking flourish with which his side were playing, Ronaldo’s goal came after 17 minutes when he reacted quickly amid a crowded Villa box to send an impish flick through his legs and into the back of the net.

To mark the launch of the Premier League Playmaker award, presented by @CadburyUK, here are some standout assists from the #PL archives

This goal against West Ham United is more memorable for the silken assist laid on by Dimitar Berbatov, who evaded his marker on the dead-ball line with a perfect pirouette before picking out Ronaldo’s sudden surge into the six-yard box. Ronaldo scored both goals in an important 2-0 win for United as they sought to close down the eight-point gap that had opened between themselves and leaders Liverpool at the top of the table.

Ronaldo converted a penalty that proved to be a vital catalyst for United in one of the Premier League’s most enthralling comeback victories. The Red Devils were 2-0 down to Tottenham Hotspur at the interval after a fairly risible first-half performance only for the crucial — if somewhat controversial — spot kick from Ronaldo to spark them back into life just before the hour mark. Ferguson’s side went on to score four further goals in a blistering final 23 minutes of the match (including another for Ronaldo) as a resurgent United claimed an astonishing 5-2 victory that helped lay the foundation for the 2008-09 title that followed.


Ronaldo made a sensational return to Old Trafford after 12 years away by scoring twice for United in a thumping 4-1 victory over Newcastle United on what some might refer to as his “second debut.” With a buoyant home crowd cheering his every touch, the veteran forward reopened his goal-scoring account in first-half stoppage time when he tapped home a sitter to put United ahead as a spine-tingling chorus of “Siuuuu!” from the fans inside the stadium echoed his celebration. Ronaldo’s second goal followed shortly thereafter as a low left-footed finish saw United take the lead again following Javier Manquillo‘s 56th-minute leveller.


Coming off the back of a miserable 5-0 evisceration by Liverpool, United bounced back by inflicting a similarly heavy defeat on Tottenham in North London. Ronaldo was at his talismanic best, putting Ole Gunnar Solskjaer’s side ahead five minutes before the break by latching on to Bruno Fernandes‘ far-post cross and guiding a superb angled volley back across the Spurs goal. Alas, Solskjaer was relieved of his position the following month but Ronaldo’s determination to inflict his wrath on Tottenham had not diminished by the time the two sides met for the return fixture at Old Trafford in March. Once again Ronaldo proved the inspiration for his side, scoring all three goals in 3-2 win over Spurs that began with a thunderous long-ranger, continued with a simple tap-in and ended with a towering header.


As if to fully cement Ronaldo’s position as a modern day hat trick colossus, the 37-year-old scored his 13th, 14th and 15th Premier League goals of the 2021-22 season with all three of United’s goals in their recent 3-2 victory over Norwich.

Amazingly enough, that was Ronaldo’s 30th career hat trick since turning 30, precisely mirroring the amount of trebles he scored before he hit the Big Three-O in February 2015. A bit of statistical symmetry is always nice.

His match-winning haul against the Canaries also saw Ronaldo become the first wearer of the fabled United No. 7 shirt to reach 20 goals in all competitions since 2008-09, when the man himself scored 26 goals in 53 games for the club in the final season of his first spell at Old Trafford. 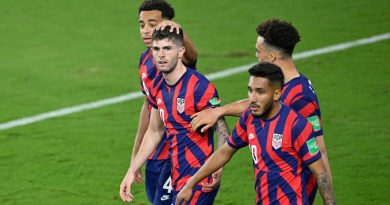 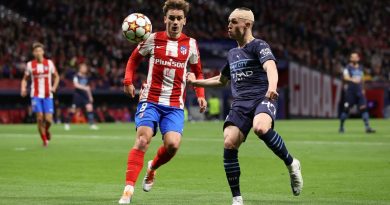