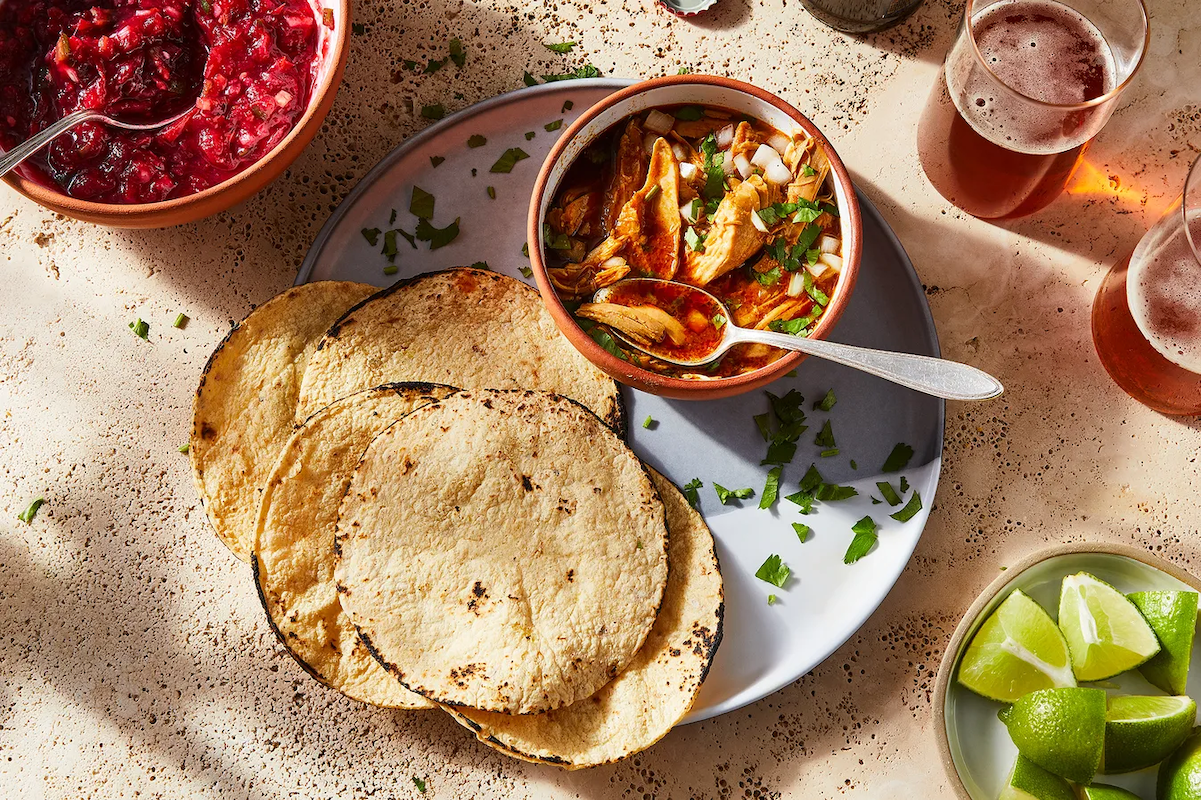 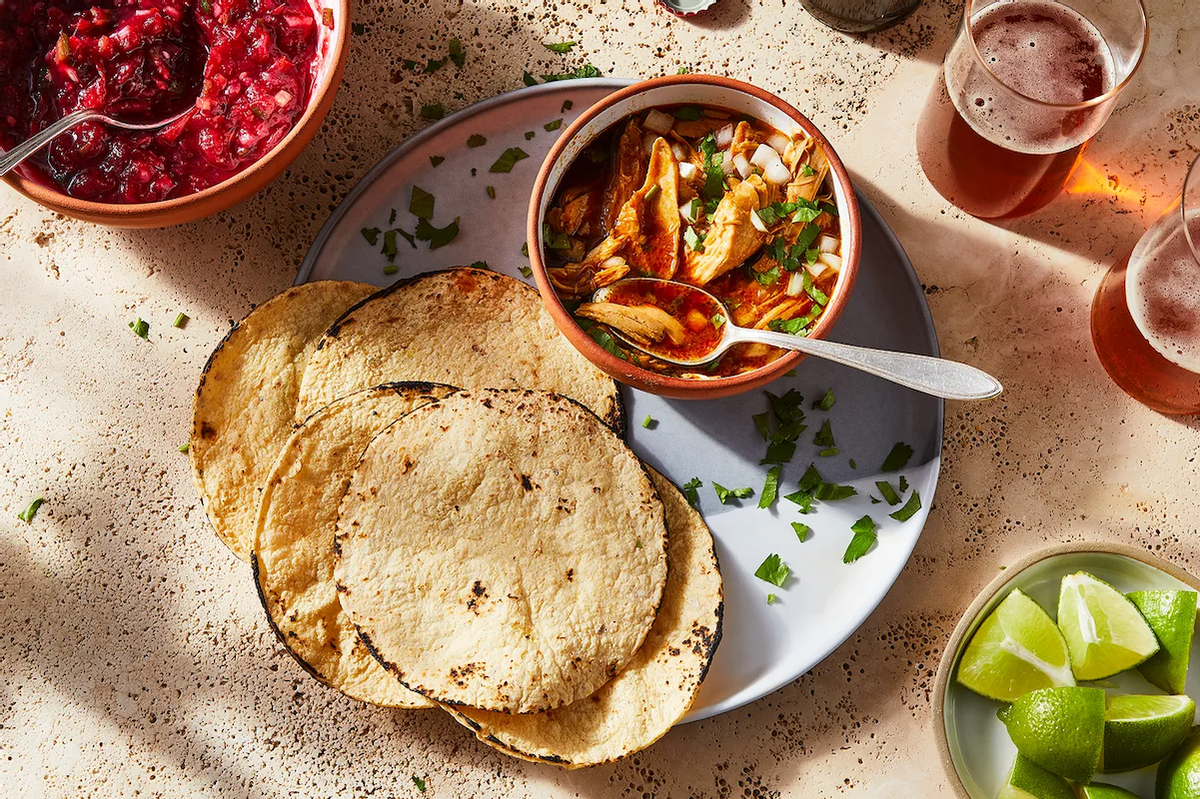 It’s impossible to not love taco night (especially if it falls on a Tuesday). It’s satisfying, serves plenty, and adapts to your whims — carnitas one week, fried avocados or grilled fish the next. With a spread of salsa, guacamole, beans, and warm tortillas before you, it’s a DIY dinner and a sanctioned chance to play with your food — something that the kids and kids at heart will love.

Oh and yes, we did say warm tortillas. And no, we won’t ask you to make your own, unless that’s what your heart is telling you to do. The truth is, store-bought tortillas work just fine for shuttling maximal taco fillings from plate to mouth, but try telling that to the cold, rubbery tortillas that sit neglected while you eat your carnitas with a fork. Look past the microwave — with a little know-how, you can reheat tortillas so they’re worthy of the things they hold. Food52 community user MarionRose asked for your tips, and you had her back:

Enlist your oven, like Food52 community member lisina does: “Wrap a stack of tortillas in aluminum foil and pop them in a 350°F oven for 10 minutes or so. They’ll steam inside the packet and stay nice and soft. Keep them wrapped until you’re ready to use them.” Former Food52-er Sarah Jampel heats them for 15 to 20 minutes and will warm multiple stacks of tortillas (five or fewer) at the same time. It’s the slowest method, but the best for entertaining a crowd.

Chef’s Hat prefers to stick with the stovetop: “I always put them in a non-stick pan, heating both sides until they start to get some color. Takes some time, but I like it far better than putting them in the oven.” You can also use a comal, griddle, cast-iron skillet, or wok; heat the pan until it’s very hot and cook on both sides until toasty. Food52er Sarah Larter wrote that her mom would “put a wire rack over the pot of simmering meat/fillings and set the tortillas on that to warm up.” Cover with a wide lid until the heat from the fillings steams the tacos.

Over on Serious Eats, J. Kenji López-Alt contends that the right way to warm tortillas is on a very hot flat surface. But the important caveat: Dip each tortilla in water before directly transferring it to the griddle so that it will steam when it encounters the hot pan. And wrapping the stack of warm tortillas in a towel is an essential step for ensuring they’re completely tender.

In “Super Natural Every Day,” Heidi Swanson says to wrap a stack of tortillas in a barely damp dish towel before placing the package in a large pot set over very low heat. Cover the pot and warm the tortillas until you’re ready to serve.

Our favorite way to heat them up also happens to be the fastest — with no equipment necessary. Cut out the middleman and get rid of the pan, but keep the stovetop. Set a tortilla over a gas burner on medium-low heat. (Do not step away from your kitchen!) When the tortilla is charred, use a pair of tongs to flip it over and expose the other side to direct heat. Stack the tortillas in a warm dishcloth as you char the rest. You can do this on two, or three, or four burners if you’re very coordinated. (Even so, it’s probably not the method you’ll rely on if you want to heat dozens of tortillas at a time.) You can also use the same technique on a grill or grill pan.

And here’s another tip: Commenter Becka Hurst Schact wrote that she dips each tortilla in the dregs of a can of beans before throwing it on the grill. Lisabu fires up her gas stove and says: “I take tongs and hold the tortillas directly over the flame for 10 to 15 seconds on each side.” Pierino loves the same “radical approach,” because it gives his tortillas “a slight char and a mildly smoky flavor,” whether he’s using them for tacos or huevos rancheros.

Diana Kennedy, in “The Cuisines of Mexico,” advises the use of a microwave and plastic wrap (even she seems a little scared to be making the suggestion): “I never thought I should be recommending a microwave oven but it is very handy when you have a large number of tortillas to reheat in a hurry.” Wrap a dozen tortillas (no more!) in plastic wrap and heat for about 1 minute. Then turn the package over and heat for another 30 seconds. Done.

Rick Bayless also votes for the microwave (but omits the plastic wrap): Drizzle a clean towel with 3 tablespoons of water and wring it out so that it’s evenly damp. Use the towel to line an 8- or 9-inch casserole dish with a lid, then pile on a dozen (no more!) tortillas, lay the towel over top, cover with the lid, and microwave at 50% power for 4 minutes. Let stand for 2 to 3 minutes before eating.

Bayless also offers instructions for steaming tortillas, which is the best method for warming large quantities (though you’ll need a steamer): Pour 1/2 inch of water in the bottom of a steamer, line the basket with kitchen towel, then lay the tortillas in the basket in a stack of 12. Cover the tortilla stacks with the towel, then put the lid in place and bring the water to a boil. Let the water boil for 1 minute, then turn off the heat and let stand, covered, for 15 minutes. To keep the tortillas warm, either put the basket in a low oven or reheat the water.

But many of us can’t have fresh tortillas every time we want a taco — which makes embracing heat, the critical element for getting the most out of a grocery store corn tortilla even more important. Warming the tortilla releases their aroma and makes them pliable, so they won’t crack under the weight of your carnitas.

The far-right is crazy — like a fox: The code behind the far-right’s success