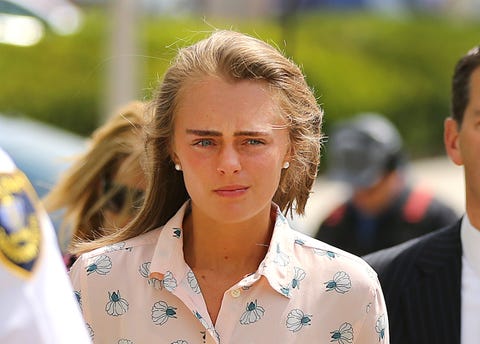 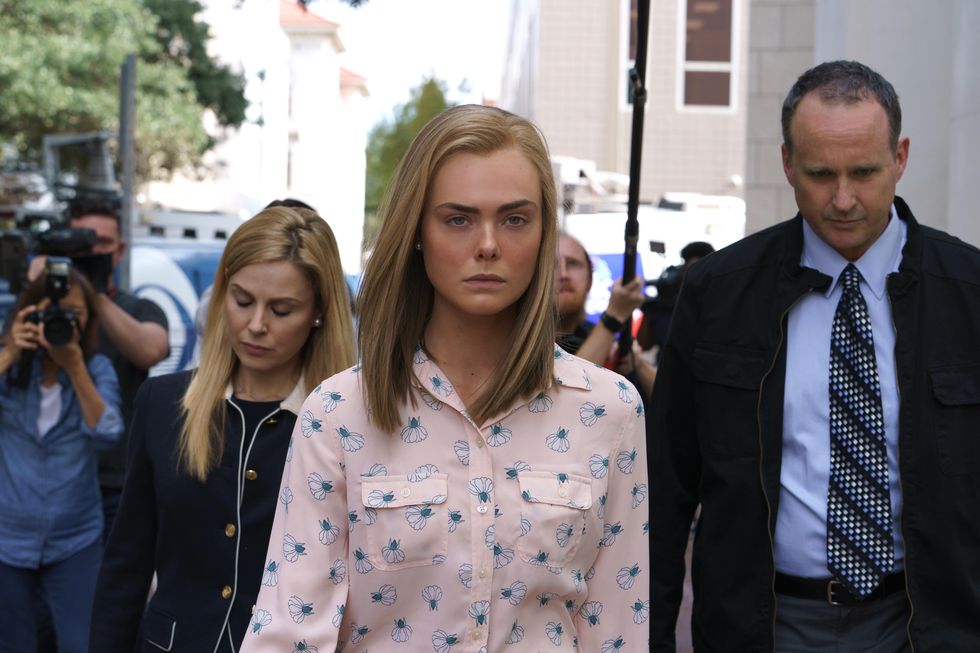 Courtroom images never tell the whole story, but they do leave a lasting impression that can be hard to shake. In Michelle Carter’s “texting suicide” case, which made national headlines in 2017, the images often showed a distraught young woman with a bold furrowed brow and blunt blonde bob. Hulu’s The Girl From Plainville explores the events that led up to the landmark case against Carter, who was convicted of involuntary manslaughter that same year, but it is only in the later episodes that the trial shifts into focus, and star Elle Fanning accurately resembles the teenager most of us saw plastered across the press.

So why the big transformation? By the time Carter was in court and appearing in the news two years after her initial arraignment, she “looked nothing like the girl who’d been indicted,” wrote Jesse Barron in the long-form Esquire article ‘The Girl from Plainville’—the source material for the series created by Liz Hannah and Patrick McManus.

Sure enough, over the last few weeks, The Girl From Plainville has depicted Carter as a fresh-faced, long-haired teen—before her name became synonymous with encouraging her boyfriend Conrad Roy (Colton Ryan) to die by suicide. The dramatically darkened brows make their first appearance when Michelle’s trial begins in the sixth episode, “Talking is Healing,” which is now streaming. Even if you are expecting this pronounced hair and make-up shift, it is still jarring to finally see it onscreen. It is a severe transformation that’s a far cry from Fanning’s recent turns as The Great’s Catherine or Aurora in Maleficent. Not to mention the pre-Euphoria glitter extravaganza in Neon Demon.

Yes, The Great is loosely based on a historical ruler, but The Girl From Plainville lands on the opposite end of the true events spectrum—and not only because it happened within the last decade. “I know the writers, actors, and everybody really wanted to treat it so respectfully with the families in mind,” Fanning’s makeup artist Erin Ayanian told ELLE.com about the tone the creative team wanted to strike when portraying the real people at the heart of this story.

Here, Ayanian talks about Michelle’s evolution into the recognizable young woman on trial, the Glee fantasy sequence, and the length of time Fanning spent in the makeup trailer.

Shooting The Girl From Plainville began just two weeks after Fanning had finished filming The Great’s second season. This was also the case for Ayanian, who has worked with Fanning since 2014 when she met the then 14-year-old on the set of a Sigur Rós music video. Since then, Ayanian has collaborated with Fanning on TV and film projects, the red carpet, talk show appearances, and magazine editorials. When it came to Plainville, Ayanian began with researching “pictures, as many still images as you can get.”

The jumping-off point for her process was focused on the availability of pre-existing footage and images. The makeup artist watched the documentary I Love You, Now Die and the 60 Minutes special on Carter’s case multiple times to familiarize herself with the defendant’s appearance. “I wanted to make sure we got all the moles in the right place and things like that,” she explains. “We really wanted to try to get as precise as we could.”

She collaborated with Fanning too. Ayanian says “we’re like two little girls playing dress-up” when they work together, whether it’s for an award show appearance or Plainville. “We talk about everything we want to match, okay freckles, the moles, the skin tone — and how are we going to create that?” With Michelle, the last part changes dramatically in the courtroom, and Ayanian had to find a spray tan workaround because “Elle’s skin is so sensitive.” Having a long-standing relationship is beneficial in these moments, as well as the shorthand that comes from working together for nearly a decade. “The blessing is we have similar taste and thought processes. We’re really simpatico,” says Ayanian.

Teenage Normalcy and the Glee Fantasy

For Michelle’s look in the episodes before the trial, Ayanian “wanted the makeup to disappear, just be like [an] everyday normal girl.” Part of this required making sure it looked like a regular teenager did it, rather than a professional makeup artist. “You have to let it be flawed. If she looks like she has an impeccable flawless makeup job that’s not real,” adds the makeup artist. “It could even take you out of the story, like why does she look all airbrushed?”

Michelle’s hair also goes through several transformations across the seven years The Girl From Plainville covers. “Jules Holdren who did the wigs was brilliant. You can’t even tell they’re wigs,” exclaims Ayanian. “She’s a magician.”

While the majority of the series is grounded in reality there are moments in which Michelle’s imagination runs free. She turns to Glee, and particularly Lea Michele in her role as Rachel Berry, in her grief and fantasizes how life with Conrad could have been. “We looked at Lea Michele and what kind of aesthetic and vibe was happening on Glee and tried to match that,” Ayanian says about the heightened musical sequence.

Endless footage of the court appearances aided Ayanian in matching Michelle’s darkened eyebrow transformation, but there is less material to reference for other pivotal moments like Michelle’s prom in the fifth episode. However, Ayanian did have some photographs of Carter attending this high school milestone. “Picture quality wasn’t great but we could tell she had probably gone somewhere and had a full makeup done,” says Ayanian. “It was every product: contour, highlighter, five colors of eyeshadow, lip liner and lipstick, big false eyelashes.”

Ayanian also had to take into account the tear- and sweat-stained version of this particular makeup design for a scene where an emotionally overwhelmed Michelle leaves prom early for a grueling treadmill session at home—it’s her method of maintaining control, which speaks to her mental crisis. “It was doing the makeup and having her scrunch her eyes tight, spraying it with water and rubbing it,” Ayanian recalls. To make it “cinematically interesting” was the goal, and Ayanian even added black eye makeup to run so it would look “a little bit more dramatic. We wanted it to be a shocker.”

As for the crying scenes throughout the series, that’s all Fanning’s work. “I’d love to take the credit, Elle just cries,” the makeup artists notes. “The girl can squeeze four tears out of her left eye if you ask.” Ayanian manages the makeup as it happens and will only fix it if it’s too much, “but we want it to look real and it is real so we just let it be.”

“Michelle’s face was fleshy and undefined. At the trial, two years later, she looked booth-tan and thin, with blue-gray eyes, full lips, and dark, mobile eyebrows that stood out against her blond hair,” is how Barron described Carter in court in his Esquire story. This is the image most viewers are familiar with and Ayanian says “the courtroom stuff was trickier. More challenging, but so satisfying in the end.” In terms of the famous brows, it isn’t just the color that the makeup artist considered, but the shape too: “Michelle’s eyebrows are really straight and Elle’s are quite arched.” To accurately get the right shape, they considered “a prosthesis over her own eyebrows and then individually laying hairs in to create.” However, this idea was discarded due to production time.

Another option would be to shave the arches. “We looked at each other and we were like, No.” Fanning does wear a prosthetic forehead for the courtroom scenes to match Carter’s hairline, but the brows are the actress’s own. Fanning spent two hours in the hair and makeup chair with Ayanian and Holdren on an average shooting day, and an additional 30 minutes on the courtroom days to account for when prosthetic artist Todd Watson applied the silicone forehead.

The tan was cosmetically applied every day, not only because a spray tan might irritate Fanning’s skin, but it is also harder to control “because you’re constantly fading and repeating and fading and repeating.” Ayanian notes with awe that costume designer Mirren Gordon-Crozier added to the accurate physical resemblance, as “she hunted the ends of the earth and got the actual matches of everything that Michelle had really worn in court—the same shirt that she wore from Ann Taylor LOFT.”

The first time Fanning went to set for the courtroom days Ayanian made sure she was with the star “because I had to see everybody’s reaction seeing it the first time and people were freaking out.” It was so convincing that when Hulu requested images they mistook the actress for the real Carter. “We sent them and they responded like, No, no, I need pictures of Elle, not Michelle. We were like, That is Elle. Mission accomplished.”

Jif recall spreads, impacting more than 20 companies that use the peanut butter in their products