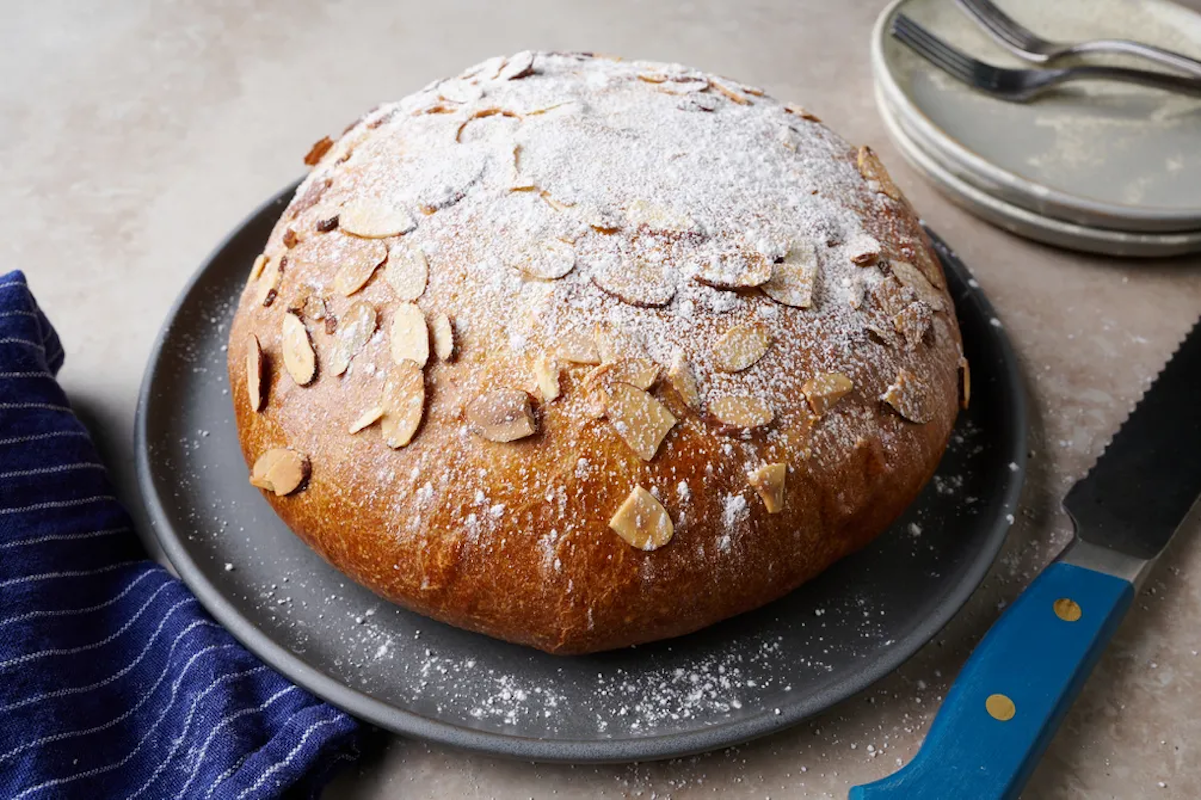 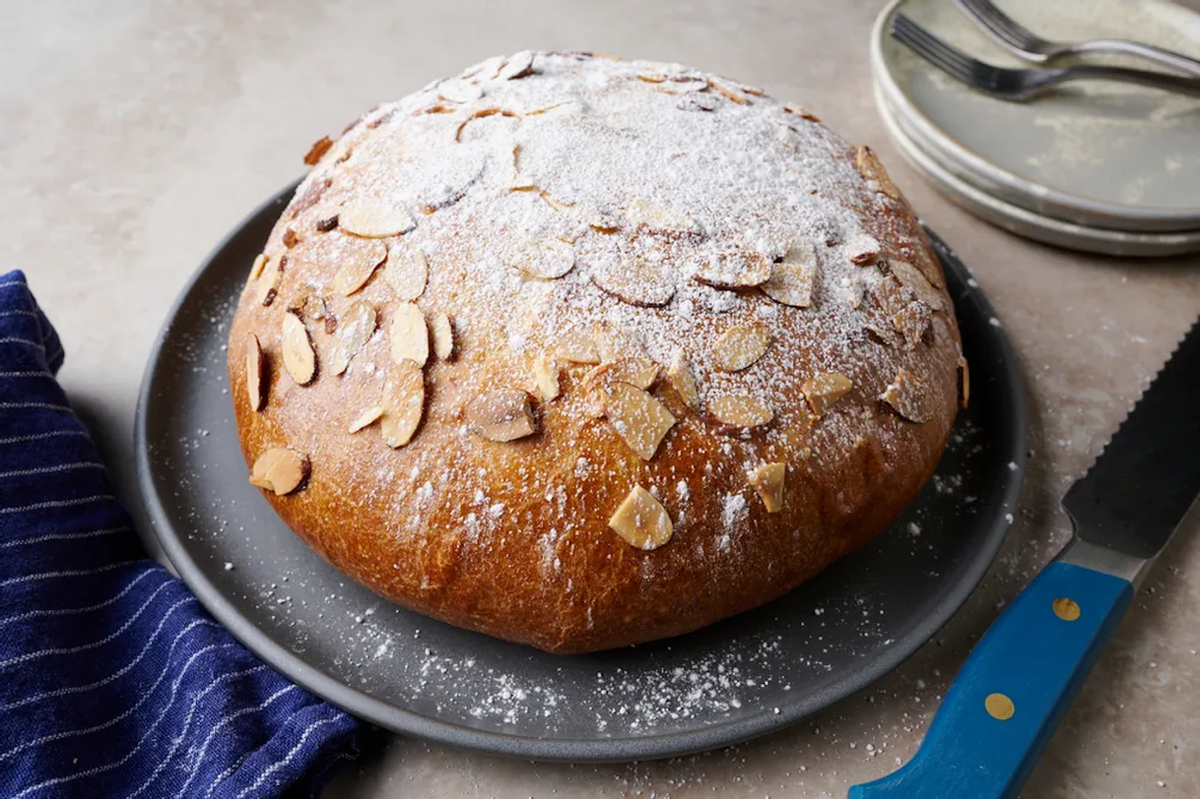 The Perfect Loaf is a column from software engineer turned bread expert (and Food52’s Resident Bread Baker), Maurizio Leo. Maurizio is here to show us all things naturally leavened, enriched, yeast-risen, you name it—basically, anything you can slather a lot of butter on. Today, he tells us about naturally leavened mazanec, a Czech sweet bread.

Many years ago I had the pleasure of traveling through Europe for work, with a multiweek stop in the Czech Republic. My hosts, knowing my appreciation for good food, took me to restaurants that catered to the locals and that were so small it felt like we were eating in their cousin’s kitchen. In these quaint eateries, I had some of the tastiest food of my entire trip. The highlight was probably eating a whole pork knuckle, but I also ordered plenty of dumplings and many a light beer. As I was traveling during the dead of winter, many spring and summer Czech specialties eluded me, including the Eastertime sweet bread called mazanec. This treat is not widely known here in the U.S., so I figured what better way to remember my trip through the beautiful Czech Republic than to fill the mazanec void and make it in my home kitchen—using my sourdough starter, of course.

Mazanec is a traditional Czech sweetened bread made around Easter. The dough gets enriched with egg, milk, and butter, and it’s traditionally filled with lemon zest, rum-soaked raisins, and sometimes other dried fruit (though untraditional, I think dried apricots or even cherries would be delicious, too). The whole thing gets topped off with sliced or slivered almonds and, occasionally, a dusting of confectioners’ sugar. If not completely covered with confectioners’ sugar, you’ll typically see it with a small cross on top representing the time of the year. Cultures around the world have their Easter-specific sweets, from the hot cross bun to colomba pasquale, each an enriched bread of some kind with added fruit and as many flourishes as can reasonably fit. They are each meant to commemorate a time of joyous celebration for many. For me, a fanatical baker, having a delicious baked treat is most assuredly the best way to celebrate.

Is mazanec a bread or cake?

The debate between whether something is cake or bread can get heated. While an ornately decorated mazanec can have the appearance of a single-layer cake, for me, it falls in the bread camp thanks to its typical use of instant yeast for leavening. There are always exceptions, of course, as there are some cakes made with yeast, such as the famous German beesting cake. I still tend to see cakes as those baked goods that rely on chemical leaveners, such as baking powder or baking soda. As it’s made with natural yeast from sourdough, mazanec requires the better part of a day to ferment enough to give the best flavor, texture, and sufficient rise in the oven. Another apt example of this debate is the Italian panettone, made with yeast: While it sure eats like a cake, it’s most assuredly not.

What flour should I use to make this mazanec?

For most breads, cookies, cakes, pies, and other pastry, I always turn to a low-protein flour such as all-purpose flour, versus a high-protein flour like bread flour. Why? I find the lower protein content makes for bread that’s less gummy, chewy, and overall contributes to a better texture. However, with enriched doughs like this mazanec, using higher protein flour can actually benefit the texture and structure.

When working in high percentages of egg, butter, and sugar, the increased protein content of the flour will lead to bread with greater volume and a lighter texture. Because egg (fat) and butter (fat) both hinder gluten formation in some way, they help keep the bread’s texture supple and “shreddy.” In a way, these enrichments help prevent that gummy texture I often find with too much high-protein flour.

Can I use whole-wheat flour?

I’m an avid freshly milled flour and whole-grain baker, but with sweets like this, and especially when using natural fermentation, adding whole grains will almost certainly bring about more sourness than desired. Through a complex process, increased whole grains help spur lactic acid bacteria activity, pushing them to produce more organic acids as a by-product of fermentation. While these acids bring significant flavor, with a delicate and sweet bread such as mazanec, it doesn’t contribute in a meaningful way.

Is there such a thing as too much butter? (Yes.)

Usually, when I start working on a recipe I keep enrichments (butter, sugar, egg) at the lower end and work my way up through subsequent tests until the flavor and texture are right where they should be. For this mazanec recipe, I started the butter at 30 percent butter to total flour weight to bring ample richness and softness to the bread, but after tasting the result, I couldn’t have been more wrong.

In baking the first few trials, the overall flavor was good, but the bread was almost too rich, too soft, and a little too overpowering. I realized that this bread isn’t about loading it with copious amounts of butter, à la brioche; it’s more subtle, and the beauty of this bread is the delicate interplay between all of the ingredients, rather than having one overpower all the others.

For my third trial, I dropped the butter dramatically down to 20 percent of the total flour weight (here that means I went from over one stick of butter down to about one-third of a stick). When I pulled that mazanec from the oven, I knew I was on to something. The bread was soft, supple, and had a beautiful buttery aroma, yet tasted lighter and less overpowering than prior tests. Finding the right level of butter meant bringing this delicate bread into greater balance, allowing the lemon, rum, raisins, and almonds to have their place in the spotlight, too.

Should I top it with confectioners’ sugar?

In my sourdough version of this bread I would highly recommend using confectioners’ sugar as the final topping. Why? I keep the sugar percentage in the dough relatively low: 8 percent sugar to total flour weight, to be exact. I keep the sugar low because it interferes with natural leavening, and compared to extremely powerful instant yeast found in many enriched bread recipes, sourdough recipes with high sugar content require extremely long fermentation times. To keep this recipe on a shorter timeline, I keep the sugar low, knowing the mazanec will have a final dusting of at the end. The confectioners’ sugar on top adds just enough sweetness to complement the sugar in the dough, making the entire thing just sweet enough that you’ll be eager to go back for slice after slice.

Tahoe becomes the number one place of the one percent