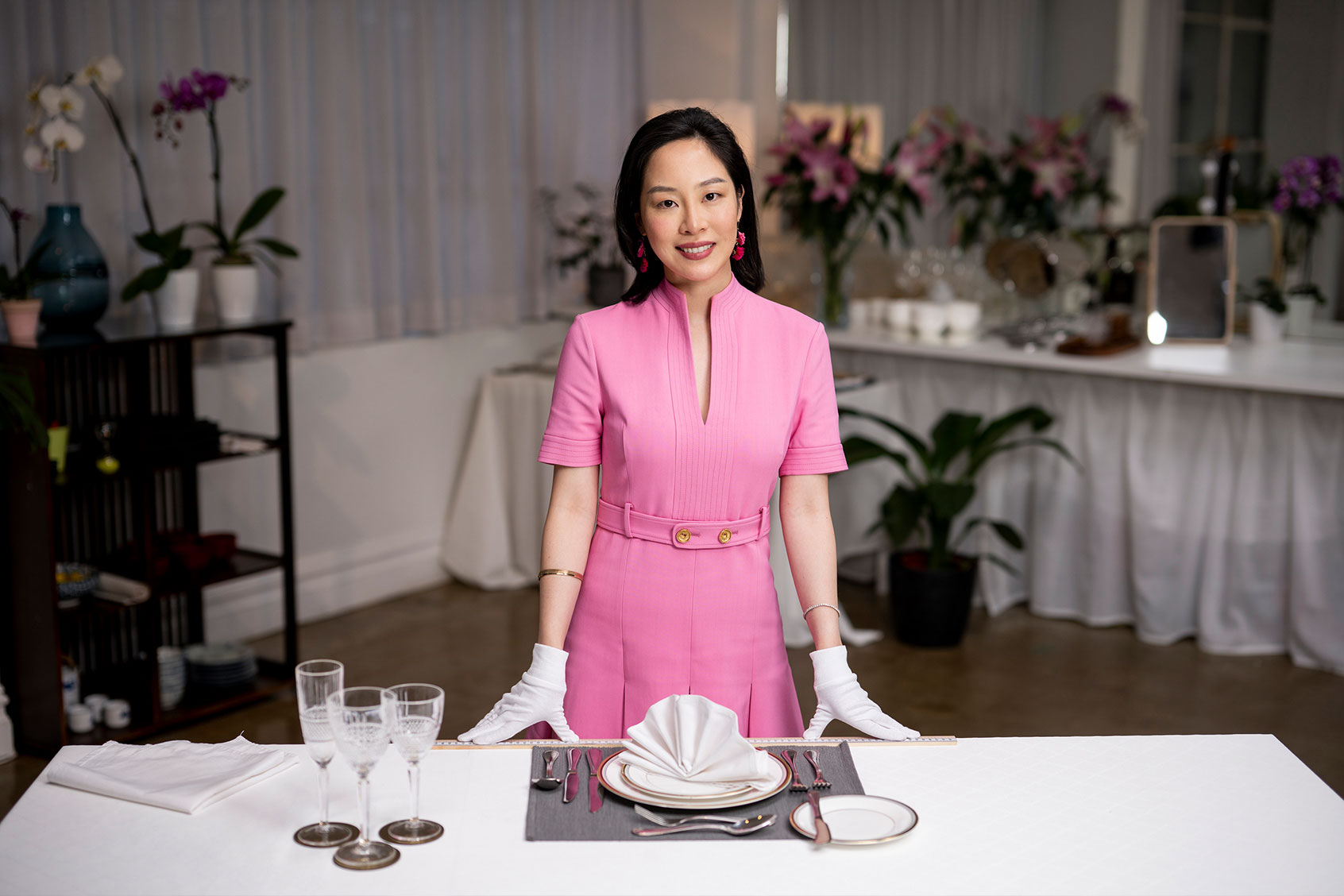 Proper etiquette can be a blessing and a boon to our interactions . . . provided it isn’t used as a weapon. This is a lesson I learned early in life when, as a participant in a major metropolitan newspaper’s summer youth program, a brief interaction with one of its newsroom’s managers led to him inviting me out to lunch at a nice restaurant nearby.

During the meal the man said little, leaving me to carry the conversation  – which is rude, but not as much as the reason he asked me to dine with him in the first place. Immediately I was aware that he was watching me like a hawk, specifically how I consumed my soup, whether I knew the proper fork to use for salad and how to hold my utensils during the main meal: all things my mother required me to master from the moment I could feed myself.

It also provided my first lesson on how the rules of etiquette can be wielded to be classist and racist.

At the end lunch he praised my manners and made a derogatory remark about the rest of the kids in the program – most of whom, like me, are Black. A day later I was assigned to that newspaper’s research department as an assistant, where I regularly interacted with famous writers, a few of whom eventually connected me with their editors.

In case the context isn’t clear: this is not a triumphant tale. My clear memory of that meal is entwined with humiliation associated with it, the shame of thinking that I was somehow gaming the system. In retelling it to my mother as I asked her whether it was wrong to accept the opportunity offered to me, her counsel was to embrace my good fortune and never forget the circumstances that yielded it.

That meal played a major role in obtaining my first major break into professional journalism. It also provided my first lesson on how the rules of etiquette can be wielded to be classist and racist.

The Dutch philosopher and theologian Erasmus wrote the principle from which this view of etiquette likely originates: “For those lucky enough to be born into privilege, it is disgraceful when their manners do not match their position.” Etiquette expert and Netflix’s “Mind Your Manners” host Sara Jane Ho understands this, which is probably why she frequently repeats the central tenet of her philosophy: Practicing proper etiquette, she explains, is about making the people around you comfortable. 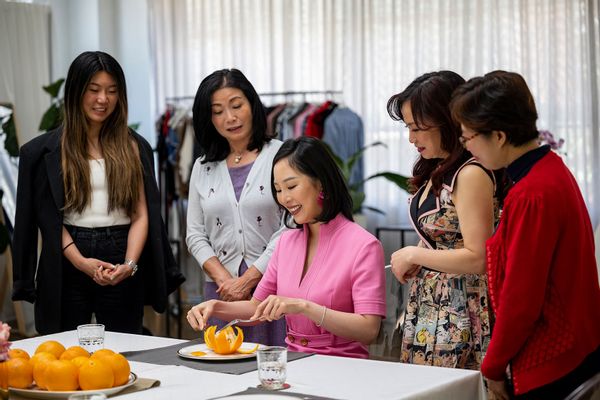 One does not clink tea cups to cheers, she calmly informs one of them, or part the cup from the saucer while being served. Her demeanor is caring and serene. At least once per episode, however, she lures subjects into pop quizzes to see if they know the right way to use napkins and utensils, inviting them to take a bite of food and firmly saying “stop” the moment they take fork in hand incorrectly.

This description probably makes Ho sound like a taskmistress – an approachable one, but a drill coach more than the life coach that she is. There’s some accuracy in that view, since perfectionism is central to Ho’s brand.

But there’s something heartening in Ho’s approach, especially as we head into the holiday season often defined by two things: a formal multicourse meal and the expectation of conflict and discomfort.

If Ho’s assurance that her goal is merely to help her clients “be the best versions of themselves” strikes a dissonant chord, that may be due to the culture-wide association of manners and matters of etiquette with snobbery. That is not off-base.

Arbiters of class position and power often discriminate by silently observing certain behaviors, especially while sharing a meal with someone or even holding a drink. Ho, to her eternal credit, understands this even as she subtly employs a similar critical eye to the one that newspaper executive trained on me. Another of her central aims is to help her clients “fit in” which one understands, in the nicest interpretation of that concept, to mean helping them behave as Romans in all “when in Rome” situations.

That saying is a reminder of the reason proper etiquette as we know it to be can feel stifling. Every aspect of the practice is associated with European nobility and the upper class. It is about “making others feel comfortable,” yes, and depending on the situation it’s also a means of signaling assimilationist behavior. 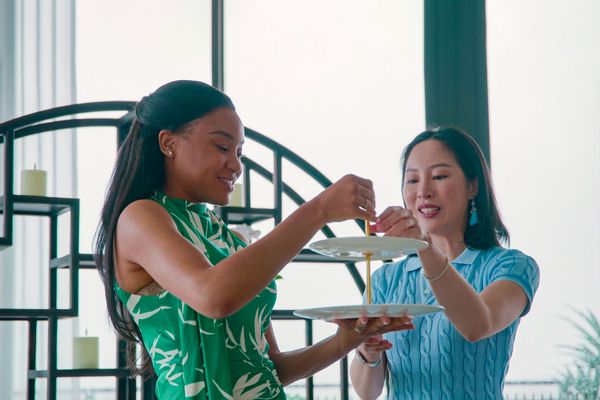 Sarah Jane Ho in “Mind Your Manners” (Courtesy of Netflix)

For example, when Ho offers English breakfast to fashionable stay-at-home mom Rashiel Jones, Ho immediately corrects the way Jones holds her fork and knife by showing the “proper” way to do so, which is to keep your fork in your left hand at all times, lifting bites with tines down at all times. This is known as Continental Style. (Thanks, Mom!)

But what makes it more proper than the American style, i.e. eating with tines facing upward, and switching your fork from the left hand to the right once you’ve cut your food? That depends on the room you’re in and who you’re dining with. Figuratively speaking, sometimes Rome is in Italy, and sometimes it’s in Georgia. Being aware of how to mind your p’s and q’s in each of those places is essential to getting by or possibly moving up in the world.

Indeed, the production itself telegraphs a few thoughts about America’s culture-wide affection for casualness (or “slovenliness,” if you want to be a prick about it), whether intentionally or not.

Over the six episodes of “Mind Your Manners,” Ho gently corrects a few subjects whose interpersonal sense of decorum is nearly up to par and extensively overhauls others. One of her toughest cases, Stephanie Osifo, is introduced in the first episode.

A hard-drinking party girl whose clothing strains public indecency laws, Osifo comes to Ho to learn how to behave more elegantly. To that end, Ho teaches her how to walk, dress more demurely, wear less makeup, and in a scene intended to channel “My Fair Lady,” properly enunciate her words as she says, “The rain in Spain falls mainly on the plain.”

There are other disconcerting components. There’s the episode featuring a white guy with an Asian fetish, whom Ho assists by polishing his dating app profile.

“Mind Your Manners” provides a friendly cram session to help anyone pass the unspoken trials most don’t realize they’re undergoing from the moment they enter a room.

I also doubt Ho was considering the long history of Black and Latine people being marginalized based on their elocution when she chose Osifo, a Black Nigerian woman, to play the Eliza Doolittle role to her Professor Henry Higgins. On the other hand, maybe she’s highly aware of such circumstances and simply trying to provide Osifo armor to contend with them.

Either way, there’s something to appreciate, however conflictedly, in the usefulness of a graceful approach to etiquette, especially as we prepare to share a table set with the family’s best china and silverware with others who don’t necessarily think like we do. It intimates that yes, there is a system aligned against people who don’t know its rules.

Considering that most people will never attend a finishing school or be taught the proper way to use your napkin, Ho’s Netflix series also provides a friendly cram session to help anyone pass the unspoken trials most of us don’t realize they’re undergoing from the moment they enter a room.

Sometimes I wonder if the man who evaluated my worth by my table manners came to understand that. No matter, because Sara Jane Ho does, and makes that example widely available for anyone learn.

“Mind Your Manners” is currently streaming on Netflix.

about how manners maketh man

Andrew Morton on His New Book, The Queen, and The Crown Season 5

More than one coup: Jan. 6 committee draws a direct line to Donald Trump