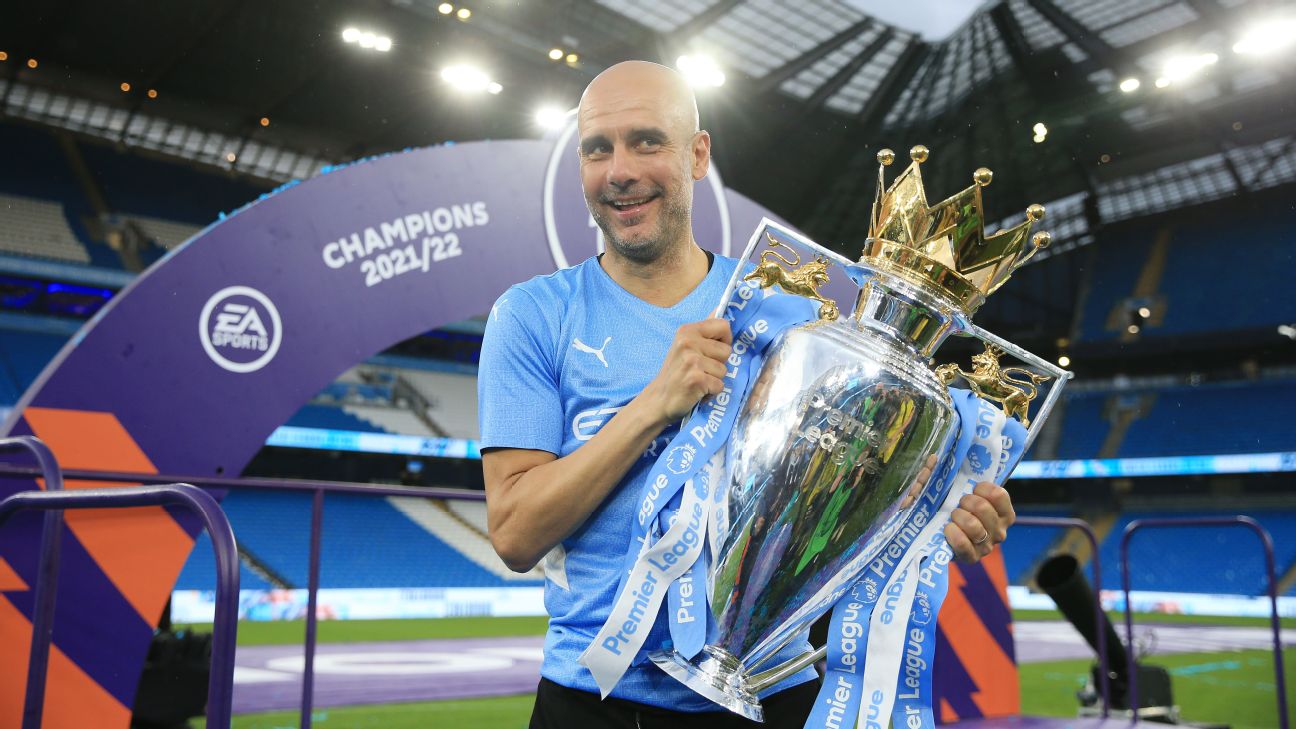 No one at Manchester City is panicking about Pep Guardiola’s future as manager of the Premier League champions — but there’s an acceptance that it won’t be long before the questions start again.

Guardiola, 51, is out of contract in the summer and, without fresh terms being agreed, he could leave the Etihad Stadium at the end of the season. City have made no secret of their desire to keep hold of Guardiola, winner of four Premier League titles and five other major trophies since he arrived in 2016, but asked in August about whether this could be his last year at the club, the former Barcelona and Bayern Munich boss was typically vague.

“I wouldn’t change my life here one second,” he said. “It’s seven seasons already. We spoke with the club. Middle of the season, end of the season, we will talk again about how we feel and decide what’s best for the club.”

“I said many times that, if they want it, I’d like to stay longer, but at the same time I have to be sure.”

Ideally, City would like to be in a position to announce an extension to Guardiola’s contract during the break for the World Cup.

Premier League fixtures have been suspended between Nov. 13 and Dec. 26 to accommodate the tournament in Qatar, leaving ample time to conclude negotiations and sign on the dotted line. Confirmation before the restart on Boxing Day would put the issue to bed well before Guardiola enters the last six months of his contract and leave everyone at the Etihad free to focus on the title race and the business end of the Champions League.

But should the matter begin to drag on into the second half of the season, it becomes a problem City could do without. If players were to start returning from the World Cup with Guardiola’s future still up in the air, it would invite unavoidable questions about what happens next — both for Guardiola and the club.

City would need time to search for a new manager. They are admirers of Julian Nagelsmann’s work with Bayern, former New York City boss Patrick Vieira has impressed at Crystal Palace, and ex-City captain Vincent Kompany has started well at Burnley — but appointing a new manager, whoever it is, is not an easy process.

Speaking in the summer, chairman Khaldoon Al Mubarak accepted that Guardiola’s position is always going to be a talking point — particularly when his contract begins to wind down.

“Pep has never stayed as long as he’s stayed here with any club, be it Barcelona or Bayern Munich,” Al Mubarak said during his usual end-of-season address to supporters. “The question is perfectly valid. It was perfectly valid last year and three years ago, and of course this year. It is a partnership that has done wonders over the years.”

Al Mubarak has been here before. Guardiola entered the final year of his last contract at the beginning of the 2020-21 season. There was speculation at the time he was keen for a rest, having already stayed in Manchester longer than he’d managed in Barcelona or Munich.

In the end he stayed, with the announcement of a new two-year deal made in November 2020. Guardiola cited his relationship with the club as one of the key reasons behind his decision to stay, and it will surely be an important factor again this time around.

“Having that kind of support is the best thing any manager can have,” he said two years ago. “I have everything I could possibly want to do my job well and I am humbled by the confidence the owner, chairman, Ferran [Soriano] and Txiki [Begiristain], have shown in me to continue for two more years after this season.”

Thanks in part to his friendship with Soriano and Begiristain, forged during their time together at Barcelona, Guardiola knows he may never have it as good as he does at City. But he’s also acutely aware that he’s only as good as his players and that his success as manager requires the squad to continually buy into what he’s trying to do.

“It’s not the second or third season, it’s many years already and I have to see how the players behave,” Guardiola said in August. “I don’t want to be a problem. Sometimes when you extend things and you force it, it’s not good so you have to go through it and relax.”

“This kind of situation happens when it’s going to happen in a natural way. If you force it, it’s not going well. We will see what happens during the season and how we feel and the best decision for the club is going to be taken.”

Bernardo Silva admitted over the summer that it can be “exhausting” working under Guardiola — but if City’s start to the season is anything to go by, then his methods are still working.

On top of that, Begiristain has managed to refresh the squad to the point that only four players — Kevin De Bruyne, Kyle Walker, Ilkay Gundogan and Riyad Mahrez — are over 30. The average age of the team picked for the 3-0 win at Wolves before the international break was just 26, and with players like Erling Haaland and Phil Foden not even close to their peak, there’s every chance that the cycle of success is set to continue.

Guardiola doesn’t want to be a manager forever, but he has ambitions beyond the Etihad. It’s likely he would take a break after City — to travel, spend time with his family and get better at golf — but after that, he hasn’t ruled out taking charge of a national team at a major tournament. Khaldoon, Begiristain and Soriano, however, hope he still has the motivation to extend his stay for at least another couple of years.

With no desire to work into his 60s and 70s like Sir Alex Ferguson or Arsene Wenger, Guardiola’s time on the touchline will come to an end eventually. City, though, are hopeful they’ve ensured that, for now, there’s no place he’d rather be.

Man City out of Champions League excuses: They have to win it