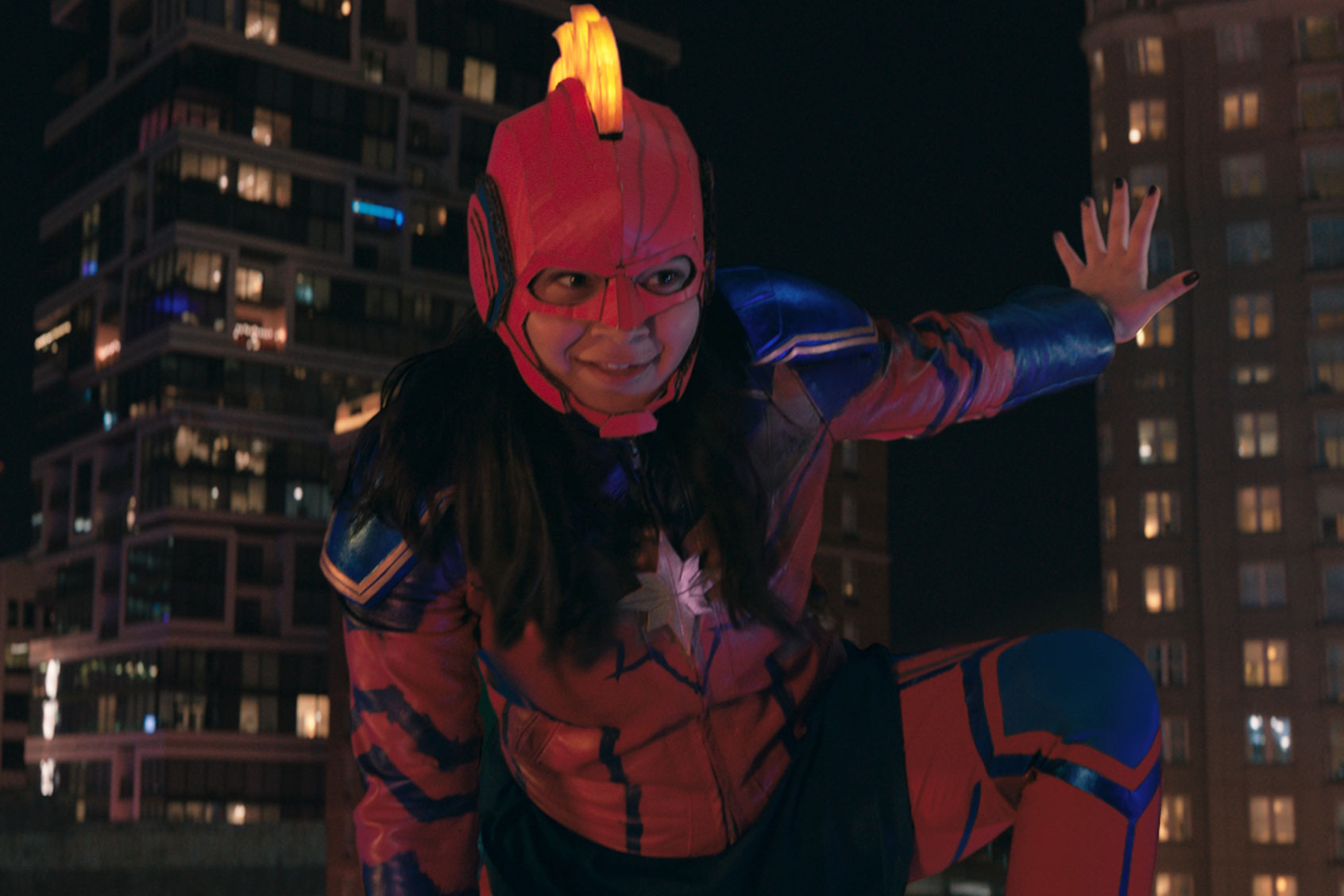 “Ms. Marvel” opens by presenting the world as the superhero-obsessed Kamala Khan (Iman Vellani) sees it – a place overflowing with infinite possibility. Graffiti dances on the walls of buildings around her and emojis float through the air, taking shape in the stars or neon lights.

Kamala is an artist who transforms her doodles into vlogs, where she illustrates her visions of superhero exploits starring her role model Captain Marvel. She thrills at knowing a woman single-handedly took down Thanos’ invading alien fleet, proving that girl power is real.

“Ms. Marvel” may be directly connected to the larger Marvel Cinematic Universe, but if it feels like it’s in a class by itself, credit its unique means of giving life to Kamala’s unfettered imagination. The premiere directed by Adil El Arbi and Bilall Fallah (credited as Adil and Bilall) sets the tone for the show’s punchy, chromatic visual style, a reflection of Vellani’s irrepressible incandescence. Where most heroes brood or snark, she makes Kamala a beacon of genuine happiness and measured confidence.

RELATED: Who is Kamala Khan, aka “Ms. Marvel”?

But if you were to catch her in a candid moment, Kamala might say that the main thing in her way is her doting but strict mother Muneeba (Zenobia Shroff), who bemoans her daughter’s wild imagination. 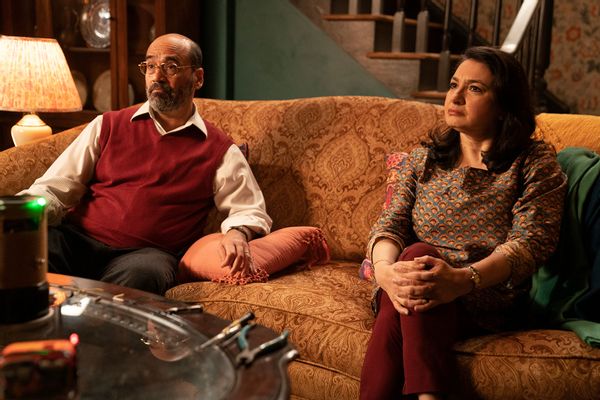 “This is my fault. This is all my fault. These are my genetics,” Muneeba mutters as she and Kamala’s father Yusuf (Mohan Kapur) chauffeur their daughter home from failing her driver’s license exam. “I mean, I come from a long line of fantasizing, unrealistic daydreamers. My mother was one.”

Ever heard the adage/complaint about mothers loving their sons and raising their daughters?

Every superhero is only as powerful as their greatest allies and their most challenging obstacles. Since the woman raising her serves as both, that means Kamala Khan is already on her way to becoming one of the Earth’s mightiest heroes. But as tough as she is, Muneeba isn’t meanspirited or undermining.

She cares deeply for her daughter, which translates to constant worry. She also lets Kamala’s brother Aamir (Saagar Shaikh) get away with anything since he’s both an adult and the eldest male child. Ever heard the adage/complaint about mothers loving their sons and raising their daughters? This show puts that saying in action while (somewhat) redeeming it.

Often on TV, where the ideal mother is often gentle, permissive, and only truly angry for a few moments when their child’s misbehavior comes to light, stern moms get a bad rap. “Ms. Marvel” lead writer Bisha K. Ali doesn’t intentionally write against that type in creating Muneeba, drawing instead on what I’ll surmise is experience.

Being a daughter of such a mother makes it easy to relate to Kamala’s frustrations. Many of us know a mother like Muneeba. Many of us have or had a parent or guardian like her.

This is also why Kamala’s Muslim identity, while central to her life and naturally celebrated in the series, is simply one part of who she is, and is far from the most interesting thing about her.  Nor is “Ms. Marvel” simply an all-ages-appropriate show about a young hero discovering her superpowers. In the main, this is the story of a 16-year-old girl trying very hard to embrace her unique gifts without disappointing her mother or break her father’s heart.

Kamala does both in the first episode, where her wild imagination runs her all the way to AvengerCon with her technologically gifted best friend Bruno (Matt Lintz). She only wants to show off among fellow geeks and be cool for once. But Muneeba has an imagination, too. She pictures AvengerCon as a party full of leering boys and drinking. “There will be a lot of haram going on there,” she warns Kamala before ultimately forbidding her from attending.  It doesn’t stick, of course, and predictably Kamala’s “genius” plan to sneak out without her parents busting her doesn’t work. 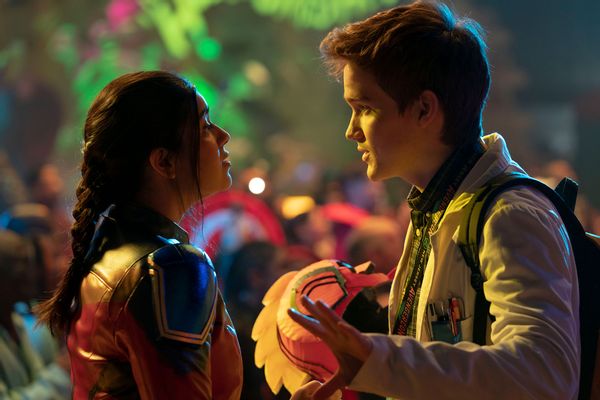 Iman Vellani as Ms. Marvel / Kamala Khan and Matt Lintz as Bruno in Marvel Studios’ “Ms. Marvel” (Daniel McFadden/Marvel Studios/Disney+)“I’m not recognizing you,” Muneeba says when she catches Kamala sneaking after 11 p.m., speaking of activities that qualify as haram. “Who is this rebellious girl sneaking out, lying to Abbu and me?”

“I’m not trying to be rebellious,” Kamala whispers.

“And I’m trying to protect you from yourself!” Muneeba replies – and if you’re an adult who has lived some version of that exchange, it may land like a body blow. That also speaks to its veracity, since in that same scene, and in life, we eventually get that such conflicts are the product of misunderstanding.

Kamala is at a time in her life when she’s sure that everyone else is having more fun than she is. Muneeba is one of those mothers who constantly frets about where the road through too much fun can lead. As teenagers, we’re encouraged to dare and dream bigger; parents like Muneeba are the stalwart anchors tethering us to Earth while frequently misinterpreted as holding us back.

“I wish that you would just focus on you,” a frustrated Muneeba explains to Kamala, elaborating what a mother like her believes a teenager like Kamala should be obsessed with: “Your grades. Your family. Your story. I mean, who do you want to be in this world, huh? Do you want to be good, like we raised you to be? Or do you want to be, you some, you, this cosmic head-in-the-clouds person?”

When “Ms. Marvel” premiered, many celebrated the title character’s status as the first major Marvel superhero who is Muslim and Pakistani-American, and certainly, those are points of pride. Vellani has said in interviews that she gravitated towards the comics years ago out of excitement over seeing a brown girl who looks like he who behaves like a teenager, and who happens to wield preternatural forces.

But another extraordinary quality about Kamala that mustn’t be discounted is the fact that her mythology is intricately connected to a positive, honest relationship with caring parents, including a watchful mother.

This isn’t unusual in the Disney universe, which made mother-daughter conflict and bonding the backbone of stories such as “Brave” and the recent movie “Turning Red.”

As teenagers, we’re encouraged to dare and dream bigger; parents like Muneeba are the stalwart anchors tethering us to Earth

Few female Avengers in the theatrical side of MCU are shown interacting with their mothers as meaningfully, though. There’s Evangeline Lilly’s Hope van Dyne, who reconnects with her mother in “Ant-Man and The Wasp.” This only happens after Hope fulfills the unspoken rule that heroes are born of trauma, since her mother disappeared during a mission when Hope was very young. Wanda Maximoff, the Scarlet Witch, lost both of her parents in a war. Natasha Romanoff, as far as we know, has no recollection of her birth mother, and in the false family assigned to her by Russian intelligence, she’s emotionally closer to her fake father.

Shuri in “Black Panther” is an exception, but everything about T’Challa’s family is ideal. They’re an extension of Wakanda’s utopia, after all. Closer to the real world is the relationship “Hawkeye” dead-eye archer Kate Bishop (Hailee Steinfeld) has with her mother, who worries her heroic exploits will bring her harm. Kate’s also a college student who owns an apartment in New York City and is fabulously wealthy.

Kamala is a brown girl living in Jersey City. She’s also a dreamer, and while American culture encourages bold dreamers, moms like Muneeba – especially brown and Black moms, and immigrants – know this country puts up walls between their children and their dreams.

Raising her daughter to be the best version of her that she can imagine, then, become her superpower. And if you are or were fortunate enough to have a mom like that you’re bound to find that much more affection for this refreshing and wondrous origin story.

The premiere of “Ms. Marvel” is streaming on Disney+. New episode debut on Wednesdays.

All About Dave McCary, Emma Stone’s Husband She Welcomed Her First Baby With