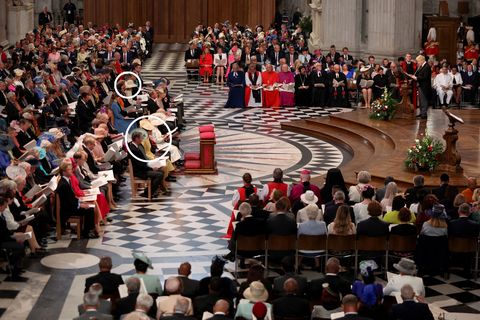 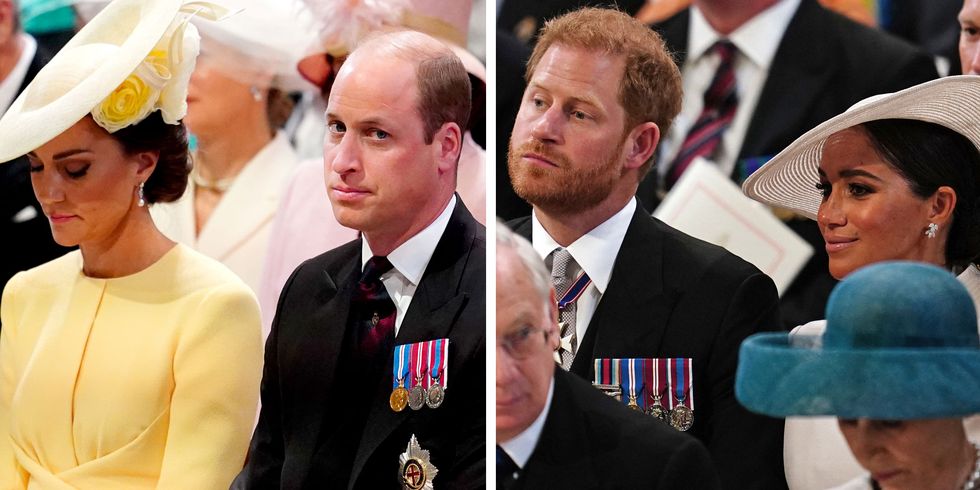 Meghan Markle, Prince Harry, Kate Middleton, and Prince William attended their first event together in two years at the Platinum Jubilee’s national service of Thanksgiving at St. Paul’s Cathedral. But just because they were in the same church hall didn’t mean they interacted at all. There was no photographed reunion between Meghan, Harry, Kate, and William. The couples were seated away from each other—and far enough that they couldn’t talk to each other during service. They also arrived and departed at different times. They avoided each other during their exits too, choosing not to mingle.

Circled is where the four were seated during service, Kate standing out in yellow near the center of the church:

The four left at different points too. Kate and William exited first, following typical royal procession, with Prince Charles and Camilla, Duchess of Cornwall, in front of them:

Kate Middleton and Prince William leaving with Prince Charles and Camilla, Duchess of Cornwall, ahead of them

Meghan and Harry left later and posed outside with Zara and Mike Tindall. Zara Tindall is Princess Anne’s daughter.

Meghan Markle and Prince Harry leaving service, with Peter Phillips and David Armstrong-Jones in front of them

The four’s choice not to interact isn’t surprising given the focus of this weekend is the Queen. Harry also hinted that things weren’t particularly rosy between him and William in April.

Harry last spoke about his relationship with his brother and their father, Prince Charles during his Today Show interview then. He notably dodged a question about Charles and William.

Host Hoda Kotb asked Harry whether he misses his family back home. “Yes, I think especially over the last two years, most people, do you not miss your family?” Harry responded.

Kotb then asked whether he missed seeing William or Charles directly. Harry hedged, saying, “Look, I mean—for me, at the moment, I’m here, focused on these guys [Invictus Games competitors] and these families and giving everything I can, 120 percent, to them to make sure they have the experience of a lifetime. That’s my focus here. When I go back, the focus is my family [Meghan, Lili, and Archie], who I miss massively. Of course I do [miss Archie and Lili], they’re two little people.”

Harry did tell Kotb that he and the Queen are very close. “We have a really special relationship. We talk about things she can’t talk about with anyone else,” he said.

A palace insider told Page Six yesterday that Harry, Meghan, Kate, and William have no plans to hang outside of Jubilee events—at least to the knowledge of the source. “At the moment, it does not look likely that Harry and Meghan and William and Kate will meet up separately during the Jubilee celebrations,” the source said. “There is certainly nothing in the diary at the moment.” Should the Fab Four meet recreationally, details will likely be kept private.

Why is Glenn Greenwald defending Tucker Carlson and the “great replacement”?

HBO’s “The Janes” spotlights the abortion activists who operated like a spy ring pre-Roe v. Wade