The African Action Congress (AAC) has said human rights activist, Omoyele Sowore remains its National Chairman, while imploring members and Nigerians to disregard the lies being peddled by “rogues” who are reportedly working for the Muhammadu Buhari regime.

The AAC in a statement on Thursday by its National Publicity Secretary, Femi Adeyeye, obtained by SaharaReporters, stated this, adding that Buhari’s government was as usual unsettled by the ongoing mobilisations for Sowore.

Adeyeye said the regime has therefore resorted to political gimmicks.

The party said, “It has come to the notice of the National Working Committee (NWC) of the African Action Congress (AAC), chaired by Mr Omoyele Sowore, that some misguided elements sponsored by the Maj Gen Muhammadu Buhari (retd) regime are spreading false news with the aim to smear the image of the party and its leaders. This is already their stock-in-trade, and we are not moved one bit.

“We are not oblivious of their plans, just as we understand that this renewed attack is coming at this time because of a successful trip to the Niger Delta region where people trooped en masse to receive Mr. Omoyele Sowore who visited his hometown after an unjust, cruel and inhumane restriction to Abuja for 3 years.

“Upon return to Abuja, AAC also submitted its authentic party membership register to INEC at its Headquarters, which was duly acknowledged. They can’t recover from this huge blow they’ve suffered. These rogue elements are drowning, and it is only natural that they clutch at a straw, even though the feeble stick will end up sinking with them.

“Setting the records straight, we wish to reiterate, for the umpteenth time, that these elements spreading fake news in the media are not members of our party. And the leader of this rogue squad was expelled as far back as 13th May 2019, after being found guilty of misappropriating party funds, gross sabotage, and numerous anti-party activities.

“If these issues of corruption and abuse of office happened in the APC and PDP, the systems therein would probably have looked the other way. But as a revolutionary party which aspires to genuinely win the people’s mandate to rescue Nigeria, we cannot keep a thief within the party leadership. That would amount to sheer hypocrisy and a crime against the Nigerian people we swore to fight alongside with. A disciplinary committee was set up and he was afforded a fair hearing. The panel then found him guilty of the offences levelled against him and recommended expulsion, which was ratified by the NWC. See full details on AAC disciplinary portal – https://aacparty.org/case-against-dr-leonard-ezenwa/

“It should be clear that this rejoinder is not aimed at replying to a statement written by non-members parading themselves as party leaders. But it is rather a piece to inform the public and members of the press about the situation in the party, which is stable and moving very fine.

“In the spurious statement published in The PUNCH newspapers, the rogue claimed Sowore was expelled by a Convention. This is utter falsehood and in fact, criminal. You all can recall that Mr Omoyele Sowore was abducted by armed men of the State Security Service (SSS) on the night of 3rd August 2019, for calling on Nigerians to troop to the streets and protest hardship. The expelled leader of the rogue squad, working on the orders of his paymasters then seized this opportunity to organize a kangaroo convention of aliens; forged names and got some elements within INEC (Independent National Electoral Commission) to supervise such illegality. It is no surprise that this event was broadcast live on the Nigerian Television Authority (NTA).

“All these happened just 6 days after the abduction of Mr Omoyele Sowore. Only those pretending to be asleep would deny that this is not a case of the hand of Esau, the voice of Jacob. After losing on all fronts, the allegation of embezzlement of party funds they are trying to wrap around Sowore is the most ludicrous, as everyone who followed the 2019 electioneering can attest to the transparency of Sowore’s campaign fundraising which was mostly done on the popular live show dubbed “The Couch”.

“As a matter of fact, most of these funds donated into Sowore’s campaign account even went into funding many of the party activities. We were also the only party whose candidate, i.e Sowore, published how campaign funds were spent. See story – https://www.icirnigeria.org/sowores-presidential-campaign-organisation-publishes-statement-of-account/ Full Statement of account – http://saharareporters.com/sites/default/files/SOWORE%202019%20SOA%20new.pdf

“The thieves know themselves and they know Sowore is not one of them. We are in this with the highest form of transparency and accountability and this the public know is never in doubt.

“As a matter of education, let it also be known that Sowore occupying the chairmanship position of the party and being its presidential candidate, is not unconstitutional or immoral. The first Convention held on 6th October 2018 ratified the protem officers of the party as substantive office bearers. The decision came as a result of the circumstance of the party, which was just a few months old, and was getting prepared for the 2019 elections, thus requiring that all hands were on deck to ensure victory.”

The AAC noted that Sowore hence “remains a staunch member of the party, a leader of leaders and a Presidential aspirant in the 2023 elections.”

“It is crystal clear that the regime is so scared of our organizing and how we’ve been able to mobilise Nigerians within the shortest time – this is the real reason for these distractions. We want to assure all faithful party members that we shall not be distracted by fake news or their mongers, including sponsored agents but shall commit ourselves more to the rescue operation we swore to uphold,” it added.

SaharaReporters earlier today reported that a group of impostors supported by the Muhammadu Buhari regime were presently plotting to use INEC and other available means to stop the presidential bid of Sowore.

SaharaReporters had learnt on Thursday that the impostors are led by one Leonard Ezenwa, who has foisted himself on the AAC party as the chairman – the party on whose platform Sowore is seeking to contest for president in the 2023 general elections.

“Ezenwa and his group were recently mobilised by the Muhammadu Buhari Regime to do everything possible to stop Sowore from contesting in the 2023 elections. Ezenwa who is also a stooge used by the INEC chairman, Mahmood Yakubu, was bribed by some political parties,” a top source had revealed.

“Ezenwa was recently removed as the Chairman of the Inter-Party Advisory Council (IPAC). He collected N150million from (Governor Nyesom) Wike to help him defeat the AAC candidate, Biokpomabo Awara, in the 2019 elections.

“He was known for selling party tickets to either APC or PDP cronies. He also collected N10million from Governor Yahaya Bello to endorse him in 2019,” the source had continued.

SaharaReporters learnt that Ezenwa had again been freshly mobilised to launch attacks against Sowore’s presidential bid through his cronies in the AAC and elsewhere. 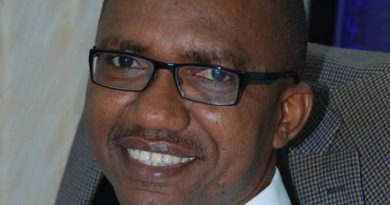 Turning the Other Cheek for Will Smith By Azu Ishiekwene