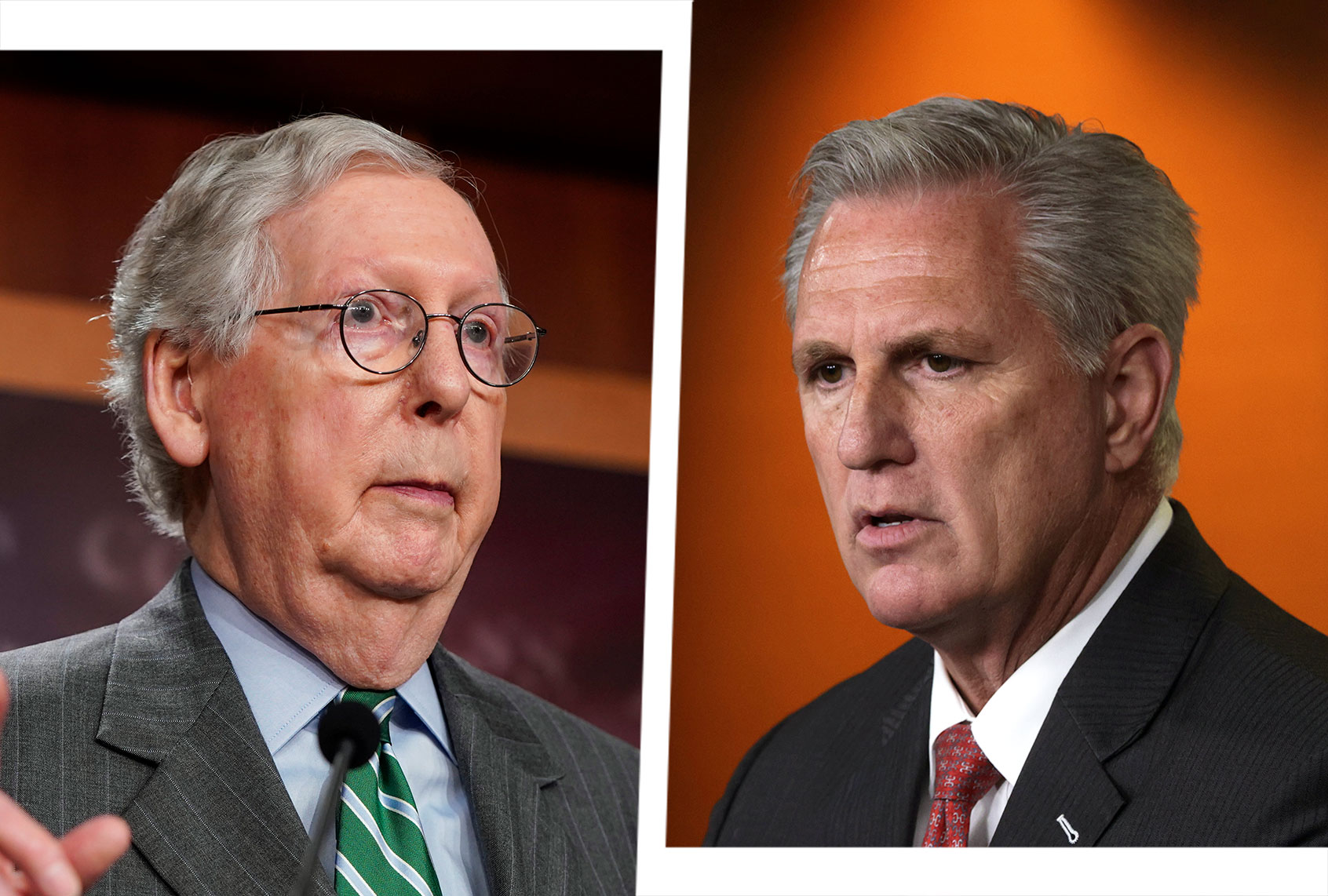 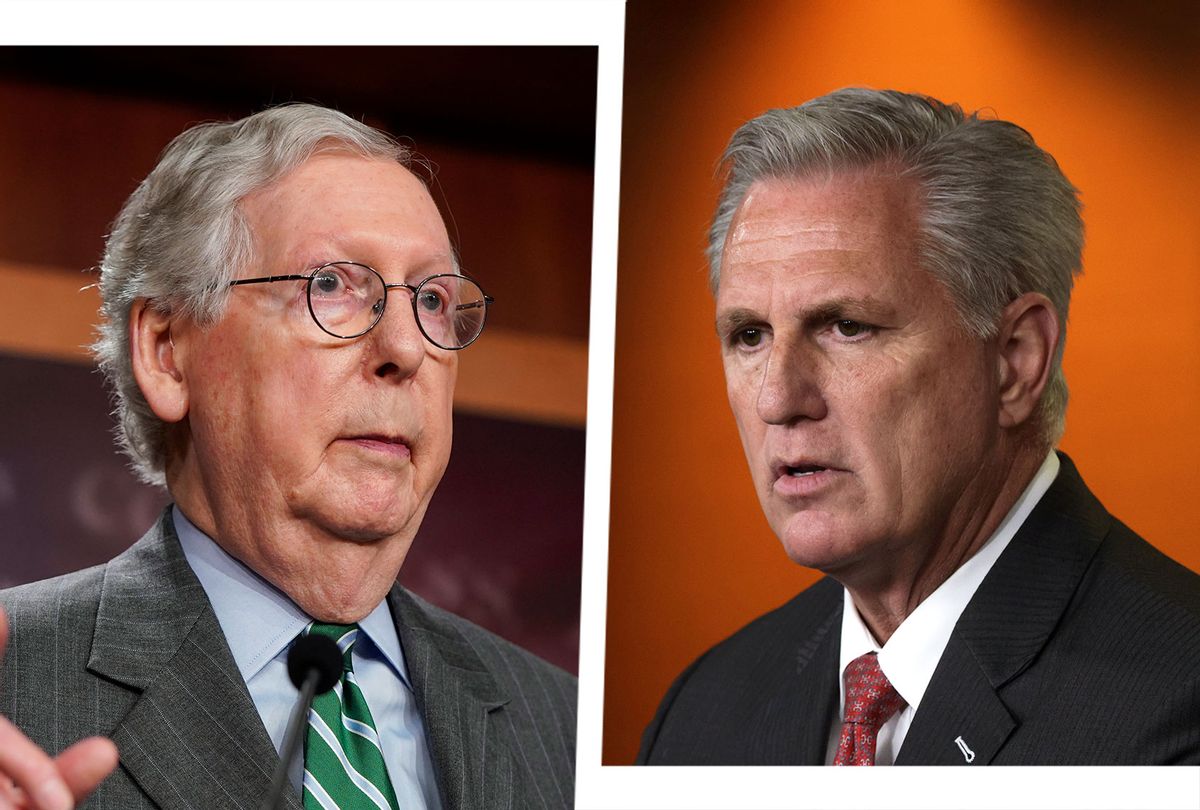 Senate Republican Leader Mitch McConnell, R-Ky., and House GOP Leader Kevin McCarthy, R-Calif., blamed former President Donald Trump for the deadly Jan. 6 Capitol riot and vowed to push him out of politics before caving amid fear of retribution, according to a new book.

“I’ve had it with this guy,” McCarthy told a group of Republican leaders as he vowed to push Trump to “resign immediately,” according to excerpts published in The New York Times from the new book “This Will Not Pass: Trump, Biden and the Battle for America’s Future” by Times reporters Alex Burns and Jonathan Martin.

McConnell, who condemned the “failed insurrection” on the Senate floor after the riot and blamed Trump for the violence, days after the Capitol riot expressed optimism that “the Democrats are going to take care of the son of a bitch for us” ahead of the impeachment for in the House, according to the book.

But neither leader followed up on their private complaints. McCarthy, who along with most of the House GOP caucus voted to reject the election results after the riot and became one of Trump’s leading defenders, soon backed off his insistence and traveled to Mar-a-Lago to repair his relationship with Trump. McConnell voted to acquit Trump in his second impeachment trial, despite privately saying, “if this isn’t impeachable, I don’t know what is.”

“I didn’t get to be leader by voting with five people in the conference,” McConnell told a friend, referring to the handful of Republicans who voted to convict Trump.

McConnell did not comment on the Times report. A spokesman for McCarthy denied that the congressman said “he’d call Trump to say he should resign.”

The previously unreported comments drew backlash from critics who have long accused Republicans of enabling Trump’s worst impulses despite privately condemning them.

“I wish we didn’t bastardize the word ‘leadership’ in Washington,” tweeted Rep. Sean Casten, D-Ill. “Leaders stand up when it matters. The people who get those titles in the @GOP are obedient and afraid.”

The Lincoln Project, a prominent anti-Trump group, said the report reaffirmed that McCarthy and McConnell “are, and always have been, spineless.”

McCarthy, who aims to become speaker of the House if Republicans retake control after the midterms, publicly said after the Capitol riot that Trump “bears responsibility” for the mob that stormed Congress but privately condemned Trump’s actions as “atrocious and totally wrong,” according to the book.

During a conversation with Republican leaders on Jan. 8, McCarthy asked about invoking the 25th Amendment, which allows the vice president and a majority of the cabinet to remove the president from office, before “concluding that was not a viable option,” according to the excerpt.

On Jan. 10, McCarthy spoke with GOP leaders as Democrats neared an impeachment resolution to vow that he would call Trump and tell him to resign.

“What he did is unacceptable. Nobody can defend that and nobody should defend it,” he told his leadership team. McCarthy said he would tell Trump that the impeachment resolution “will pass and it would be my recommendation that you should resign,” even as he acknowledged that Trump was unlikely to follow the advice.

McCarthy, who has repeatedly gone to bat for far-right members of his caucus, even suggested during the conversation that social media companies should ban other members who helped stoke the mob, like Rep. Lauren Boebert, R-Colo., just as they did with Trump.

“We can’t put up with that,” McCarthy said, according to the report. “Can’t they take their Twitter accounts away, too?”

A spokesman for McCarthy denied that he ever “said that particular members should be removed from Twitter.”

Other Republicans on the leadership team agreed that Trump deserved “swift punishment,” according to the book. Rep. Steve Scalise, R-La., the No. 2 Republican in the House, said it was time to consider a “post-Trump Republican House.” Rep. Tom Emmer, R-Minn., the head of the National Republican Congressional Committee, suggested that Trump should be censured.

None of the leaders followed through on their suggestions after other Republican members, like Rep. Bill Johnson, R-Ohio, warned that their voter base would “go ballistic” if they criticized Trump instead of Democrats.

“I’m just telling you that that’s the kind of thing that we’re dealing with, with our base,” Johnson reportedly said.

Just 10 House Republicans joined every Democrat in the House to impeach Trump. By the end of January, McCarthy was headed to Mar-a-Lago to make nice with Trump and pose for a photo.

“I didn’t know they were going to take a picture,” McCarthy “somewhat apologetically” told a frustrated lawmaker after the photo, according to the report.

McCarthy never again repeated his criticism of Trump and instead blamed the riot on security officials and Democratic leaders while opposing a bipartisan commission to investigate the attack.

McConnell throughout January privately predicted that mainstream Republicans would break from Trump and even asked a reporter for information on how the 25th Amendment works. Though two of Trump’s Cabinet members resigned over the attack, including then-Transportation Secretary Elaine Chao, McConnell’s wife, it became clear that the Cabinet would not remove Trump from office and McConnell turned his attention to impeachment. During a Jan. 11 meeting with longtime advisers Terry Carmack and Scott Jennings, McConnell predicted Trump’s “imminent political demise,” according to the report.

Though it would have required at least 17 Republican senators to convict Trump, McConnell told advisers that he expected a “robust bipartisan vote for conviction” and then a vote to ban Trump from holding office again, the book says.

Though McConnell appeared open to voting to convict Trump himself, he soon realized that there was little appetite among his party’s members to confront Trump. McConnell and a majority of the party instead voted for a resolution proposed by Sen. Rand Paul, R-Ky., arguing that it was inappropriate to impeach a president after he already left office.

Trump since Jan. 6 has repeatedly attacked McConnell but the Senate GOP chief says he is still willing to support the man he said may still be subject to prosecution for his role in the riot.