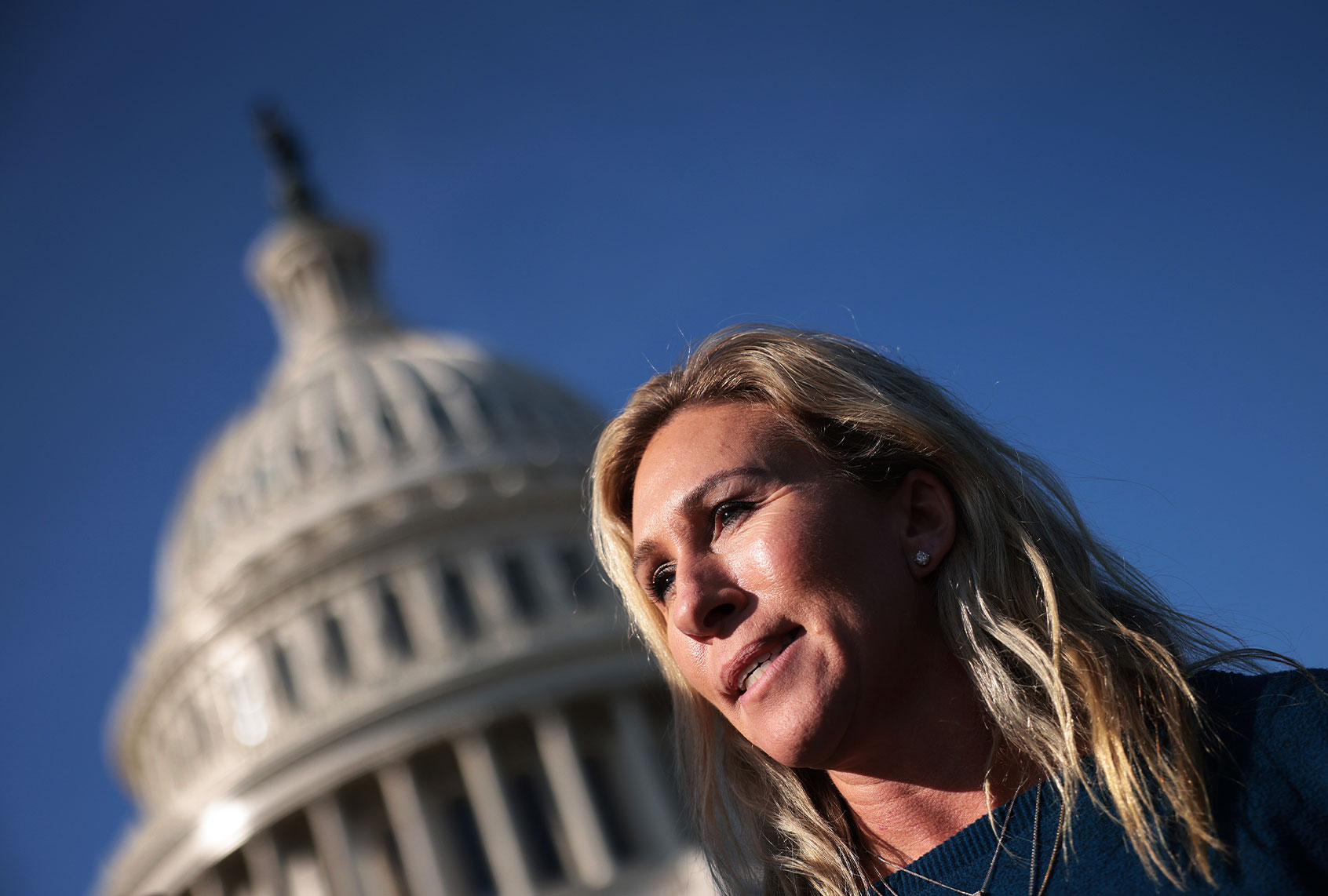 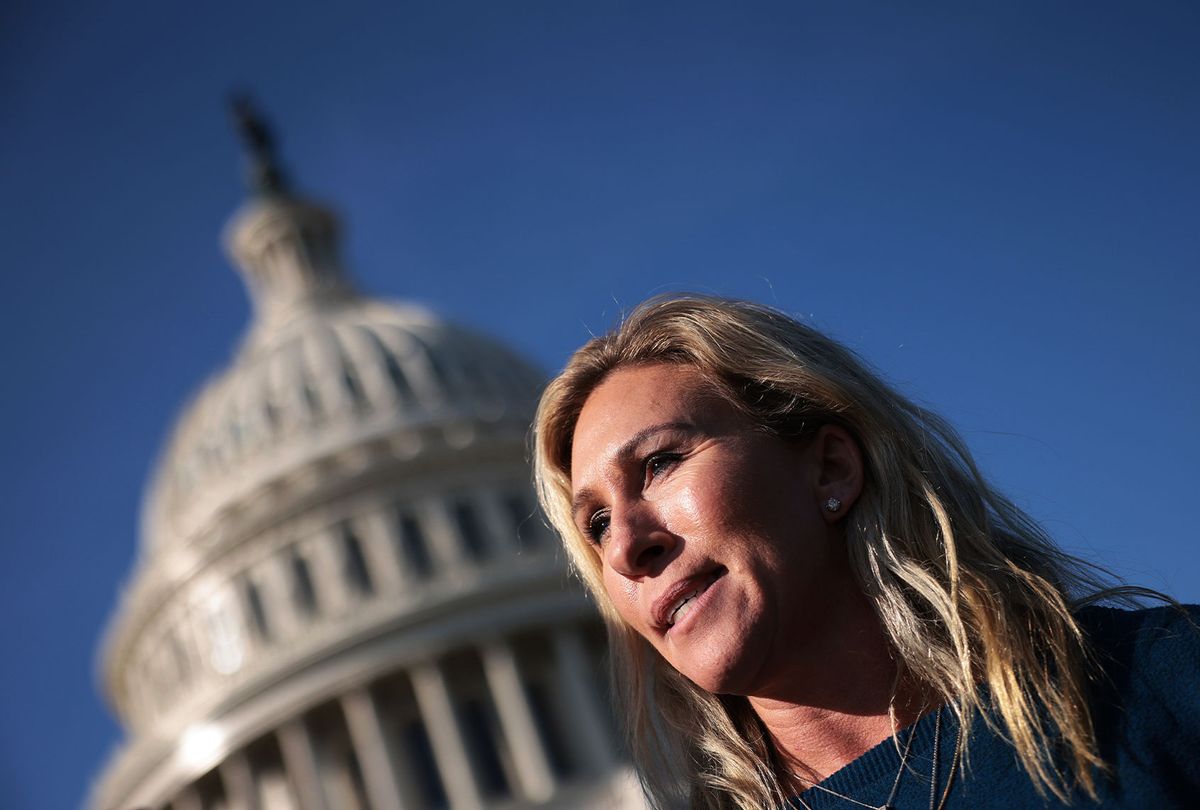 A federal judge on Monday rejected Rep. Marjorie Taylor Greene’s, R-Ga., attempt to block an effort seeking to disqualify her from running for re-election, allowing the challenge to move forward.

A group of Georgia voters earlier this year launched an effort to disqualify Greene from running based on a post-Civil War constitutional provision that banned members of the Confederacy from holding office. The 14th Amendment bars from office anyone who took an oath to defend the Constitution and then “engaged in insurrection or rebellion against the same, or given aid or comfort to the enemies thereof.” The progressive group Free Speech for People has cited the provision to target numerous Republicans who played key roles in the deadly Jan. 6 Capitol riot.

Greene sought a temporary injunction and temporary restraining order to halt the effort, arguing that the case was unlikely to be resolved before Georgia’s May primaries.

U.S. District Court Judge Amy Totenberg on Monday rejected Greene’s effort, writing in a 73-page ruling that she failed to meet the “burden of persuasion with respect to this important and essential prerequisite to [Greene’s] demonstration of an entitlement to injunctive relief.”

“This case involves a whirlpool of colliding constitutional interests of public import,” wrote Totenberg, an Obama appointee. “The novelty of the factual and historical posture of this case — especially when assessed in the context of a preliminary injunction motion reviewed on a fast track — has made resolution of the complex legal issues at stake here particularly demanding.”

Totenberg wrote that Greene failed to show that there was a strong likelihood that she would win the case on the merits. A state judge is scheduled to hear the case on Friday. If the state judge disqualifies Greene, she could appeal and extend the process beyond the state’s May 25 primaries.

“Judge Totenberg’s well-reasoned opinion explains why the Georgia voters who filed this challenge against Greene have the right to have their challenge heard, and why none of Greene’s objections to the Georgia state challenge have any merit,” Ron Fein, legal director for Free Speech for People, told The New York Times. “At the hearing on Friday, we look forward to questioning Greene under oath about her involvement in the events of Jan. 6, and to demonstrating how her facilitation of the insurrection disqualifies her from public office under the United States Constitution.”

Greene lawyer James Bopp Jr. criticized the ruling and told the outlet that the judge’s decision minimized the effect the disqualification effort is having on Greene’s right to run for office.

“This is fundamentally antidemocratic,” he said, adding that Greene “publicly and vigorously condemned the attack on the Capitol.” He argued that the effort to disqualify Republican lawmakers from the ballot would strip voters of their right to choose their candidate and create elections determined by “bureaucrats, judges, lawyers and clever legal arguments.”

Greene ahead of the riot called the effort to challenge the election results “our 1776 moment,” which the legal challenge cited as code for inciting violence. The group argued in a filing last month that Greene helped plan the storming of the Capitol or was aware that the pro-Trump demonstration ahead of the riot would escalate to violence. Two organizers that are cooperating with the House Jan. 6 committee last year told Rolling Stone that Greene was among  “close to a dozen” Republican members of Congress who participated in numerous planning briefings ahead of the riot.

The effort to disqualify Republicans involved in the Capitol riot has targeted numerous Trump allies. Free Speech for People filed a similar effort seeking to bar Rep. Madison Cawthorn, R-N.C., arguing that he “urged his followers to threaten and intimidate” members of Congress and that he or his staff were also “in close contact with rally organizers.”

U.S. District Judge Richard Myers, a Trump appointee, blocked the challenge, ruling that the Amnesty Act of 1872, which effectively gave Confederate soldiers and supporters immunity from the 14th Amendment provision, applied to Cawthorn as well. The ruling drew pushback as legal experts argued that the 150-year-old law only applied to Civil War confederates, not future insurrectionists.

“According to this court ruling, the 1872 amnesty law, by a trick of wording that — although no one noticed it at the time, or in the 150 years since — completely undermined Congress’s careful decision to write the insurrectionist disqualification clause to apply to future insurrections,” Fein told the Times last month. “This is patently absurd.”

Similar challenges have been filed against Reps. Paul Gosar, R-Ariz., and Andy Biggs, R-Ariz., who were accused of helping to plan the pre-riot rally but have denied wrongdoing. Activists have also targeted state Rep. Mark Finchem, who attended the rally and is now running for secretary of state with Trump’s backing. A separate effort by a Democratic super PAC is targeting Sen. Ron Johnson, R-Wis., and state Reps. Tom Tiffany and Scott Fitzgerald.

Bopp, who is representing Cawthorn, Greene, and other Republicans against the challenges, told the Times earlier this month that as many as two dozen Republican lawmakers may be targeted in an effort to establish legal precedent to block Trump from running for office.

With enough test cases, at least one challenge could succeed. “Judges do make a difference,” he said.

Free Speech for the People has said they would urge state administrators and lawmakers to ban Trump from future elections.

“This isn’t just about the voters” of a certain district, Fein told The Guardian earlier this year. “The insurrection threatened our country’s entire democratic system and putting insurrectionists from any state into the halls of Congress threatens the entire country.” 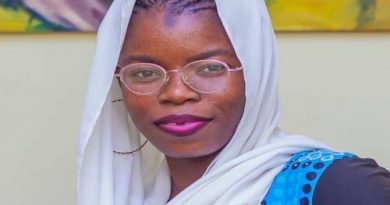