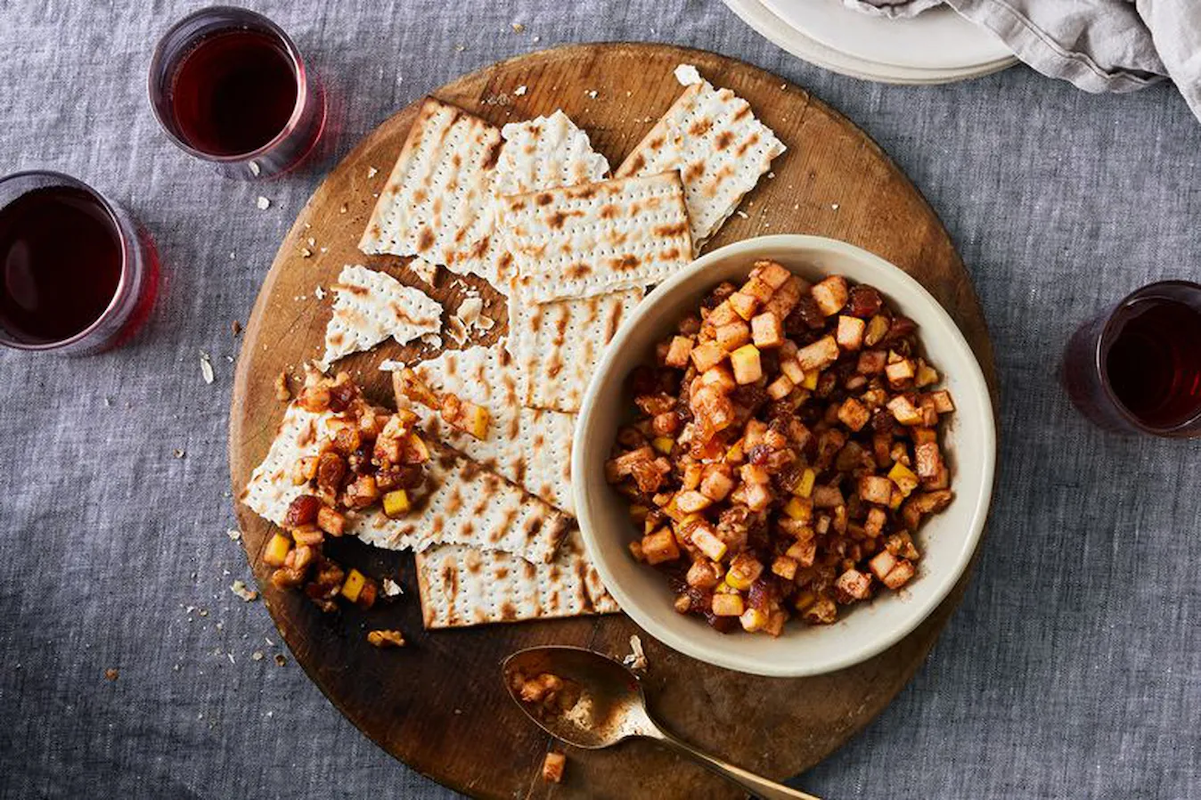 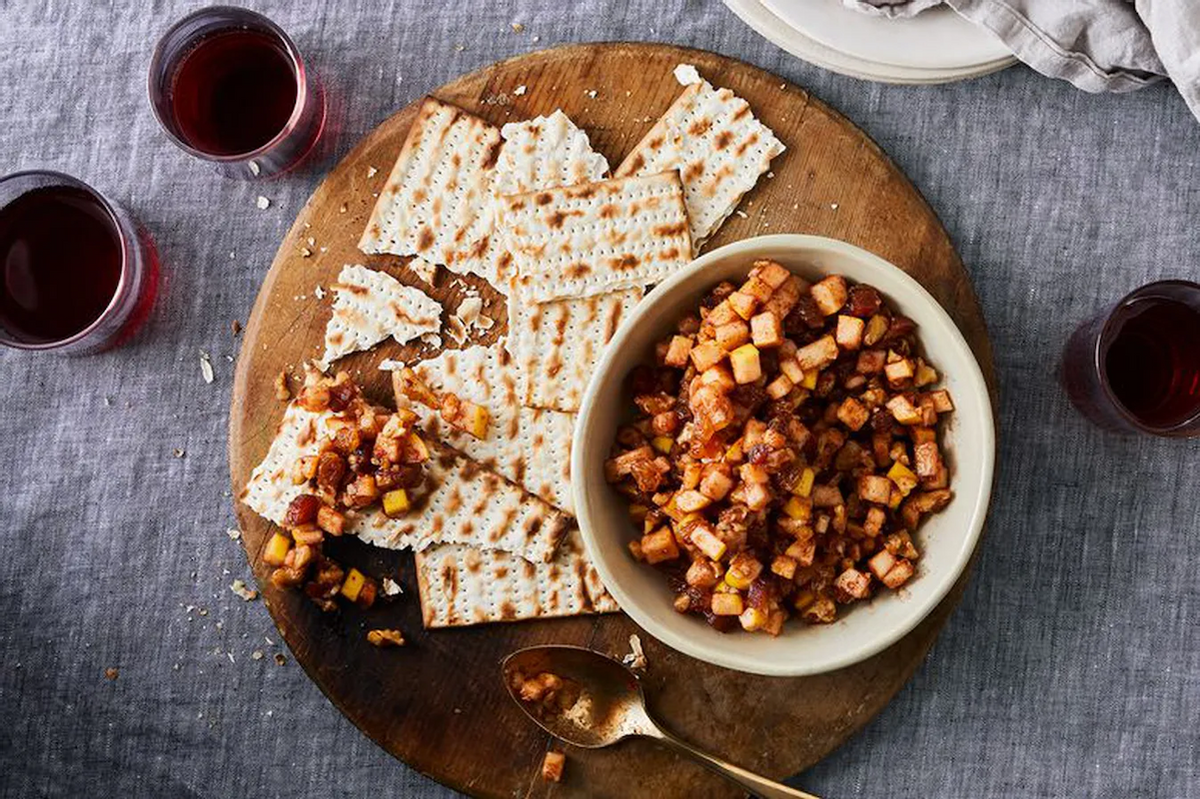 Every year, in the days leading up to Passover, Ziggy Gruber makes up to 1,500 pounds of charoset. For comparison, my mom will make no more than a pound of the chopped fruit and nut mix, and there will be some left over. But when has Gruber ever done anything on a small scale?

David, who goes by Ziggy, is a third-generation deli man. His grandfather, Max, arrived in New York via Budapest at the turn of the century. He found work in delis across the city until 1927 when he opened his own, the Rialto Deli, with his brothers-in-law. The Rialto, they claim, was the first deli to open its doors on Broadway, just two years before the start of the Great Depression. Amidst the anguish of the era, the Rialto thrived, serving the likes of Ethel Merman and the Marx brothers. All three of them. Decades later, Ziggy’s father opened his own deli, on Madison Avenue and called it Genard’s. Once Ziggy came around, the family had moved, shuttered its prospects in the city, and opened a deli in decidedly quieter Spring Valley, New York.

Ziggy never really stood a chance: By the age of eight, his grandfather was pawning him off to uncles and friends, sending him to caterings, scheduling him behind the counter. As Ziggy would say, he was born to be a deli man. Fast forward a stint at Le Cordon Bleu in London and a few years spent cooking in some of the city’s premiere kitchens and Ziggy returned to the U.S. to open a deli of his own. This time on the opposite coast.

He opened Ziggy G’s in Los Angeles on Sunset Boulevard in 1990, but what started out a success soon soured after a dispute with a landlord that forced Gruber to close the place and return to his native New York. It wasn’t until 1999 that a family friend, fellow deli owner, and restaurant broker called Gruber with a proposition. Come meet this guy. His name’s Kenny and he’s got a dream to open a Jewish deli in the heart of — of all places — Texas. Kenny & Ziggy’s opened in Houston later that year. Since, they’ve been featured on Guy Fieri’s exploration of all things epic, “Diners, Drive-Ins and Dives,” and been at the center of a 2015 documentary, aptly titled “Deli Man.”

To enter Kenny & Ziggy’s is to enter pandemonium manifest. It’s 7,500 square feet and vivacious, the walls are shellacked with photo frames — some are filled with sketched caricatures of celebrities, others with photos of celebrities, posing jovially with the deli’s staff and owners. The tables are always, always full. A rotating case of cakes and pies greets you at the front door. For Jews in Houston, it’s an institution. For everyone else, it’s an institution as well.

Most things in Houston are big and heavily air conditioned. Kenny & Ziggy’s is no exception. The menu, like any good Jewish place of eating, is a small novel and the portions are the kind that parents warn kids to split: mile-high Reubens and knishes for days, mounds of whitefish bigger than the friendliest of ice cream scoops.

In the days leading up to Passover, the kitchen fields an overwhelming swell of orders. Particularly for their charoset. The sweet and fruity chutney is peak Passover food, and like everything else on the seder plate, is imbued with meaning. It represents the mortar that the Jews, enslaved in Egypt, used to build and layer bricks. At its most basic, charoset is but fruit and nuts, chopped into a semi cohesive paste. At its most flourished, it offers a myriad of interpretations. It can be softened with Manischewitz or brightened with dates, made crunchier with bits of pistachio or silkened with jam. Like Judaism, charoset bends to the whims of local traditions. In Egypt, they might forgo apples and opt instead for dates and raisins as a fruity base; in Italy, some add chestnuts. It’s a malleable formula that we eat on Passover, with a bit of horseradish, to remember that what is sweet must always come accompanied by that which is bitter.

Ziggy’s recipe for charoset was given to him by his Hungarian grandfather, the original deli man. It’s an Ashkenazi recipe — with apples and cinnamons, bound by apricot jam and blackberry wine — that Ziggy and his kitchen staff will spend the next few days preparing by the truckload, literally. Each year the deli sends out two refrigerated semitrucks worth of the sticky spread to families across Houston. If you’re in their orbit, why not order from the Ziggy himself? For those a bit further away from the delivery zone, feel free to make some yourself.

Now that you’ve got your charoset recipe, here are 10 additional Passover menu ideas from our editors:

Since noodles are off the table during Passover, opt for the often-overlooked potato kugel. This version is Passover-friendly, made with matzo meal, eggs, and lots of shredded potatoes and onions. If you’ve never tried potato kugel, think of it like the casserole version of a potato latke — crunchy edges, with a creamy, tender center.

This is a pretty classic brisket recipe for Jewish holidays with one not-so-classic ingredient: pickle brine. Reviewer FoodieYogi writes, “I think the pickle juice is the secret ingredient, plus the obvious love from the creator’s recipe!” While adding love is non-negotiable, pickle brine is really just a smart substitute for vinegar that reduces waste and adds a little sweetness. (But feel free to use vinegar if you don’t have any pickles in the fridge!)

Bring a little Texas flavor to your Seder table with this recipe that takes inspiration from barbecued brisket. The best part about this recipe? It tastes even better the next day, so you can avoid getting stuck in the kitchen last-minute. Author Leah Koenig adds, “make it the day before, then reheat the sliced meat, onions, and braising liquid in the oven until warm and bubbling; the flavors really blossom after hanging out in the fridge for a night or two.”

4. The Big Tzimmes for Passover

Tzimmes is a traditional Ashkenazi Jewish side dish that’s especially common during holidays like Rosh Hashanah and Passover. Root vegetables like sweet potato, yam, and carrot, are stewed with dried fruits until sticky, sweet and delicious. It’s the perfect way to round out your Seder table and a welcome complement to fatty brisket, starchy kugel, and of course, sweet, nutty charoset.

Coconut macaroons are perhaps the most ubiquitous Passover dessert. But these macaroons are not the ones I remember from my childhood Seder tables (slightly stale, plucked from a plastic grocery package). These cookies, from baking expert Alice Medrich, are also known by the name “Chewy Gooey Crispy Crunchy Melt-in-Your-Mouth Cookies”, which should tell you all you need to know.

If you have any charoset left over the next day, my favorite way to enjoy it is to lean into its sweet side by serving it atop matzo brei with maple syrup. This brown butter brei is a welcome update to the standard recipe and adds a nutty, toasty flavor. And yes, I have yet to find a recipe not improved by brown butter.

This is by no means a traditional matzo ball soup (considering that it’s not made with chicken broth or egg-based dumplings), but it is a delicious comfort food to eat during Passover. The matzo balls are made with chickpea flour and aquafaba (the starchy liquid from a can of chickpeas), which creates the necessary texture — the balls are fluffy, but still have enough body that they don’t completely fall apart in the hot vegetable broth. Oh, and about that broth. It is made from scratch using a delicious combination of root vegetables, whole black peppercorns, parsley, and more chickpeas.

The beauty of Passover is that it always falls during the height of spring, which means you’ll have your pick of seasonal vegetables like asparagus, artichokes, beans, radishes, ramps, and rhubarb. This preparation of asparagus is a little bit more interesting than a simple steam-and-serve, but it’s just as easy to cook and pair with brisket or roast chicken.

If you want a break from the usual brisket, try serving roast chicken for seder this year. This recipe couldn’t be easier to follow and it comes together in less than an hour, making it a breezy, far from intimidating option for first-time hosts.

Brimming with a bevy of in-season vegetables, this crowd-ready recipe is the perfect Passover side dish.

Think Trump’s first term was a nightmare? Wake up — if he wins again, the worst is yet to come

Another dam(n) extinction: Another rare plant destroyed by a hydroelectric dam

Why Is Alexis Bledel’s Emily Not in The Handmaid’s Tale Season 5?

In ye olde days when it wasn’t considered cool to have bushy eyebrows, I tragically plucked mine into oblivion. As