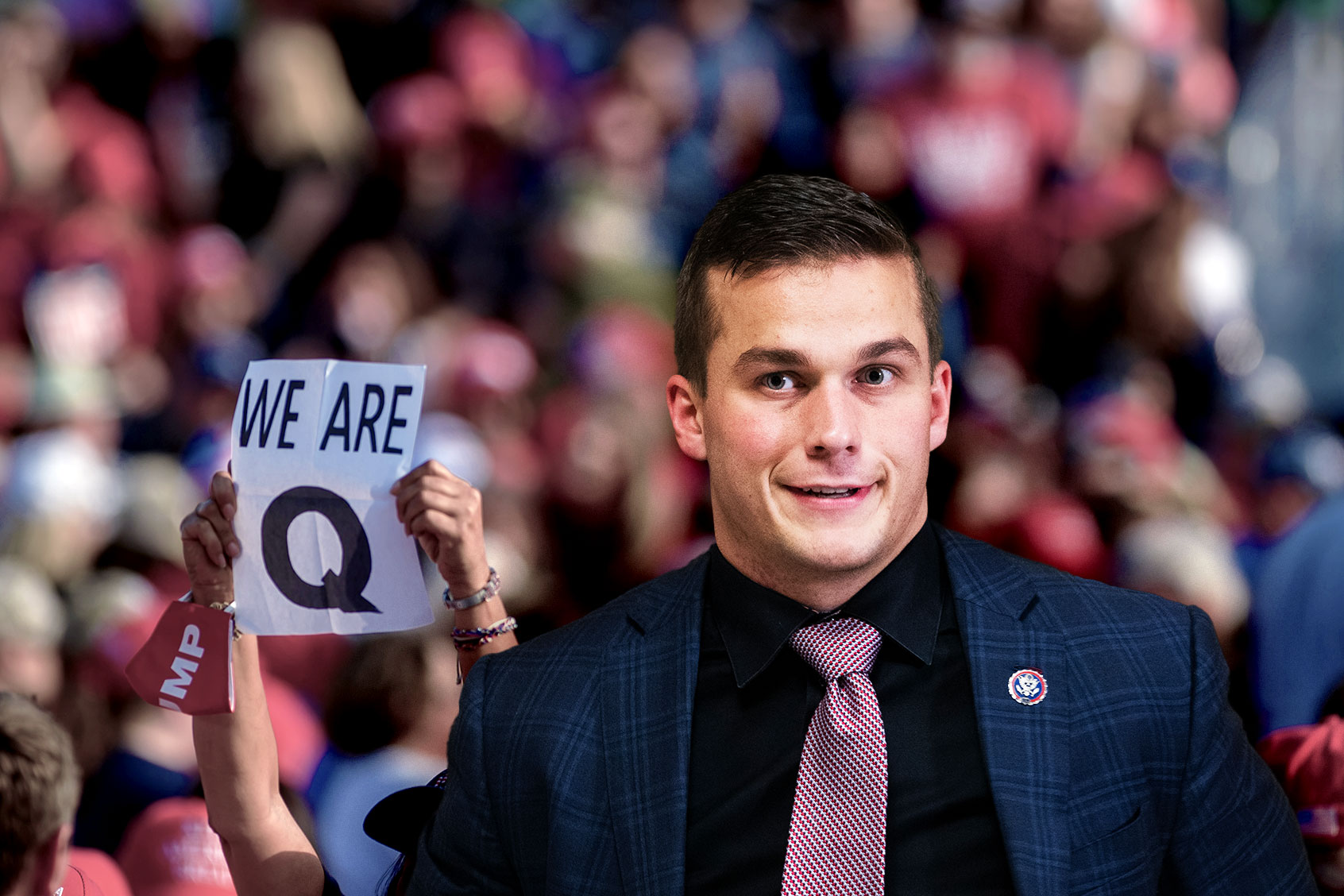 “The sexual perversion that goes on in Washington, I mean being kind of a young guy in Washington with the average age of probably 60 or 70, and I look at all these people, a lot of them that I, you know, I’ve looked up to through my life,” Cawthorn said. “Then all of the sudden you get invited to like, ‘well, hey, we’re going to have kind of a sexual get together at one of our homes. You should come there,’ like… What, what did you just ask me to come to? And then you realize they’re asking you to come to an orgy.”

Cawthorn made these remarks on a podcast hosted by John Lovell, who is the founder of a multimedia network called Warrior Poet Society, which produces content that is focused around this idea of being a “warrior poet.”

RELATED: Why some New Age influencers believe Trump is a “lightworker”

Anyone who’s brushed up against New Age, yoga-loving wellness groups could easily mistake this term “warrior poet” as a coinage more befitting of that crowd. That’s because it’s certainly been used, and still is used, in those circles. Yet Lovell’s right-wing idea of a warrior poet is specifically masculine, and involves toting firearms (Lovell is an NRA instructor).

Yet Lovell claims being a warrior poet does not explicitly mean being pro-violence, despite his many articles and videos centered around firearms. As he explained once on another podcast, a warrior poet is a man who is “more than guns,” but someone who is interested in “family, faith and freedom.” It’s someone who is stereotypically masculine, but also vulnerable.

A quick search of the hashtag #warriorpoet on Instagram or Twitter will reveal two different, seemingly competing communities in which this phrase is wielded: one, by the right-wing, gun-toting “warrior poets” à la Lovell, but also in communities of New Age wellness followers and leaders. For example, Aubrey Marcus, founder of the “lifestyle brand” Onnit (whose vitamins are promoted by Joe Rogan) who runs retreats called Fit For Service (with promo videos that make it look like Burning Man), also frequently employs the phrase “warrior poet.” In a February 2021 tweet, Marcus — who publicly shares his psychedelic experiences, and refers to himself as a “fitness junkie” and “human optimizer” — shared a poem entitled “Code Of The Warrior Poet.”

Marcus, who markets himself as some sort of New Age spirituality health guru, has also publicly promoted vaccine hesitancy throughout the pandemic and associates himself with people who promote QAnon-adjacent misinformation.

With that in mind, is it mere chance that the phrase “warrior poet” is employed by both groups? And is there more crossover between the two than one might think?

“It is no coincidence that the term ‘warrior poet’ is being used to promote libertarian men’s groups and far-right ideology,” said Dr. Stephanie Alice Baker, a senior lecturer in sociology at City, University of London who studies wellness, misinformation and conspiracies. “The term warrior connotes images of virile masculinity and being part of a community driven by a common cause; the term ‘poet’ frames this mission as an expression of inner wisdom and as part of a higher calling.”

Matthew Remski, a co-host of the aforementioned Conspirituality podcast and a cult dynamics researcher, agreed that the term links two seemingly disparate communities, and said they have more connections than one might think.

“I think that’s on brand for ways in which the various iterations of men’s rights movements going back to pre-Warren Farrell times, have combined these two streams of leftist, progressive, feminist seeming, visions of manhood that men are able to be in touch with their feelings and express survivorship and confess traumas,” Remski said. “And then men who are able to use the same kind of truth-telling spells to speak about their strength or their durability or their bravery or their quest for freedom; I don’t think there’s a contradiction at all.”

Indeed, the use of “warrior poet” in both circles is reflective of the widening overlap between spiritual thinking and far-right politics — which also overlaps with QAnon and anti-vax conspiracies, which often cite mystical or semi-spiritual concepts —  under a desire for these groups to reclaim masculinity in some way. As Remski pointed out, there have been prior iterations of this notion dating back to the ’70s (not adjacent to QAnon) where the terms “warrior” and “poet” have appeared together. The specific coinage of a warrior-poet seems to trace back to the so-called Mythopoetic Men’s Movement.

While Marcus’ lifestyle brand and Fit For Service retreats aren’t explicitly for men, there’s a particular masculine vibe to these events; photos and advertisements feature very muscular men that are often shirtless and wearing Viking-esque gear.

Baker told Salon there are “strong parallels with religious groups, as these communities tend to present their personal journeys of self-discovery as part of a cosmic battle and New World Order.”

In 2021, Cliff Leek, assistant professor of sociology at the University of Northern Colorado, argued to the Washington Post that this kind of masculinity and the movements they draw can be a reaction to pro-feminist men’s groups that do work around reproductive health and sexual violence.

“As soon as we tie masculinity to spirituality, we turn masculinity into something ‘sacred’ as well as distinct and exclusive of women,” Leek said. “I’m not entirely sure that is something that can be done in a way that doesn’t reinforce or naturalize inequalities.”

Baker told Salon there are “strong parallels with religious groups, as these communities tend to present their personal journeys of self-discovery as part of a cosmic battle and New World Order.”

Notably, what both groups also have in common is their attempt to try not to brand themselves around a single ideology. For example, Lovell says being a warrior poet isn’t being all masculine. However, maybe not so ironically, on the Warrior Poet Society website there is an article entitled “What is a Woman?,” which seems to mirror the far-right’s reaction to Justice Ketanji Brown Jackson’s response to a question about the complexities of sex and gender. As for Marcus’ stated politics, he identifies as “anti-political” and doesn’t vote, according to an interview with Refinery29.

Remski called Marcus’ politics “reactionary centrism,” a position that ensures that people in these groups don’t “buy into the system of labels that separates one person from another.”

“What they’ll say is that to label their behavior and positions with any kind of clarity is  an attack on personal nuance and their pretense of universal oneness,” Remski said.

But oftentimes, the the kinds of posts they share with their followers, Remski explained, are “straight from MAGA-land.” In a way, this brand of rhetoric promotes extremism in a more subtle yet effective way.

“It gives a very sophisticated language for denying that one is actually extremely partisan,” Remski said, which leads us to where these movements exist today — a seemingly odd convergence of two worlds, that has always had parallels, but are coming together in more distinct ways today.

“There’s a new element in the crossover between New Age culture and right-wing militia culture, and that is the connective tissue of neuroscience and optimization, and MMA,” Remski said. “Aubrey Marcus and Joe Rogan are doing a bro fist-bump between those two zones.”

Won’t somebody think of Stephen King? Antitrust law and the publishing world’s mega-deal

“Rage like I’ve never seen”: Right-wingers turn on Trump after his candidates “s**t the bed”