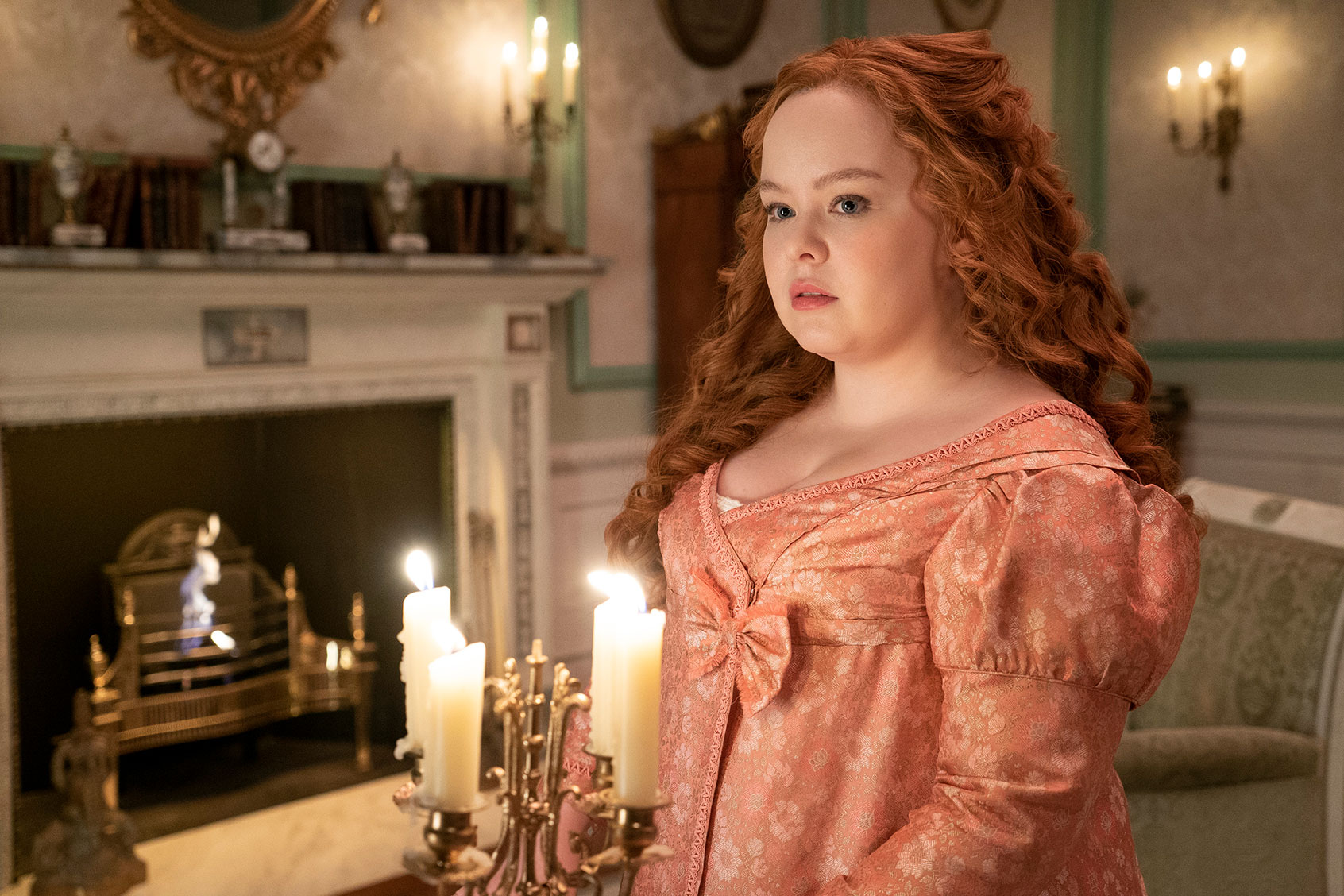 It’s no longer a secret who the gossip writer is on “Bridgerton,” the Netflix hit now in its second season. Revealed to be Penelope Featherington at the end of last season, the youngest daughter, overlooked, of a family besieged by scandal, Lady Whistledown serves as a narrator for the show (well, Julie Andrews doing a voiceover does).

Her identity still a mystery to her well-to-do community, Lady Whistledown (Nicola Coughlan) continues to write and print what she knows, or thinks she knows, about the goings-on of her high society. And the whole “ton” continues to react, eating up every issue. But now that the gossip writer has been unmasked to the viewing audience, it remains to be seen what the tension will be with her role.

How does Lady Whistledown do what she does? What’s the history of gossip writing? And should Penelope even risk it?

Related: Is Lady Violet the oracle of “Bridgerton”?

“Bridgerton” concerns itself with the courting season of its Regency-era characters, including the large family of the Bridgertons, and the Featheringtons, who have a lower status in the “ton”: a family of daughters always dressed in colorful, floral flocks. Penelope is the youngest Featherington, consistently ignored by her family; Colin (Luke Newton), the Bridgerton she has a crush on, who thinks of her primarily as a good friend; and her actual good friend, Eloise Bridgerton (Claudia Jessie).

We haven’t yet seen how Penelope first turned to writing, how exactly a wealthy and sheltered young Regency girl figured out where to go to print her work (and that she would need to be in disguise as a lady’s maid to do so) or how to distribute it. As “Bridgerton” is not exactly actual history, perhaps the character was inspired by newspaper columns of the day (or later in the 18th century) which would cover balls, fashion and the happenings of socialites.

As Shondaland writes in an interview with “Bridgerton” historical adviser Hannah Greig, “Unlike Lady Whistledown, however, the columnists and writers, many of whom were anonymous, didn’t typically reveal whom exactly they were talking about.” Lady Whistledown gives full names — perhaps not yet realizing she needs to protect herself – but that was not usually done in gossip columns or “scandal sheets,” where the character of the day would be identified only by an initial or a descriptive hint about their identity. We know these entries as “blind items” today.

Penelope may have been emboldened to become Lady Whistledown due to the combining force of several factors: the relaxing of some licensing laws during the Regency making it less likely to be accused of libel, and a revolution in printing, making publications much more available. Greig told Shondaland, “The print culture changed. There was a massive explosion of newspaper culture, of publications of pamphlets — it was a world of paper, basically. And you needed information to put in there. It was a kind of journalistic heyday.”

Some popular books around this time were also based on real-life figures, dramatizing the goings-on of wealthy members of society in fiction. Regency autofiction, if you will. Known as “silver fork novels” or “fashionable” novels, they were specifically marketed as aspirational books for readers in lower classes, “providing the insider’s insights into high life,” as Tamara S. Wagner writes on The Victorian Web. Penelope is often reading — what else can a neglected young woman without suitors do? Perhaps silver fork novels make up some of her library.

But Lady Whistledown writes about high society for high society, not as an aspirational manual so much as an insular “who’s who” among the “ton.” Her readers pick up her work hoping (or not hoping) to see themselves as much as to find out what’s going on, or what she deems worthy enough to write about in each issue. 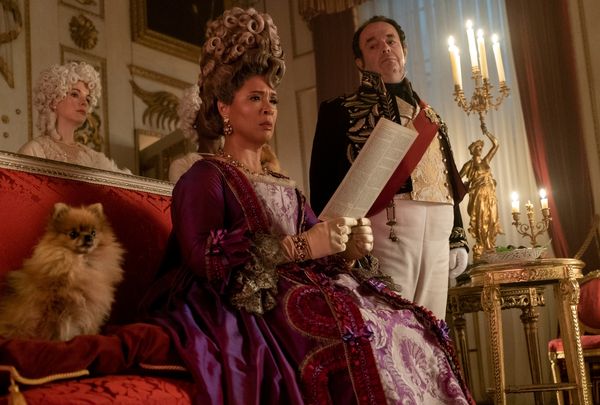 In contrast to the Queen, Penelope has her power because everyone ignores her. They forget she’s standing there in a corner of the ball. They would never assume the powerful, influential and often cutting writer to be sweet little Penelope Featherington. She uses her disadvantages to her advantage, and her vigilante-type writing allows her to have an alter ego, a life outside the shadows by the punch bowl, a self-actualization that would not be afforded to a young woman of her status otherwise.

Nobody puts Lady Whistledown in the corner.

But is Lady Whistledown taking advantage of her power?  She sent business to dressmaker Madame Delacroix (Kathryn Drysdale). But she also basically threatened her. Last season, she ended the marriage hopes of her cousin by not-so subtly alluding to the young woman’s pregnancy. That was punching down. And the fact that her cousin had been engaged to her longtime crush, Colin Bridgerton? That was convenient.

In the 1930s and ’40s, gossip writing saw a heyday in Hollywood’s “Golden Age” when writers with columns were a powerful tool of studios, used to control actors and their under-contract lives. Leaks about romantic dalliances were well-timed for publicity and other, less favorable stories squashed to protect reputations. (This calls to mind Shy Baldwin’s recent storyline on “The Marvelous Mrs. Maisel” with a whole team devoted to protecting the singer’s image.) 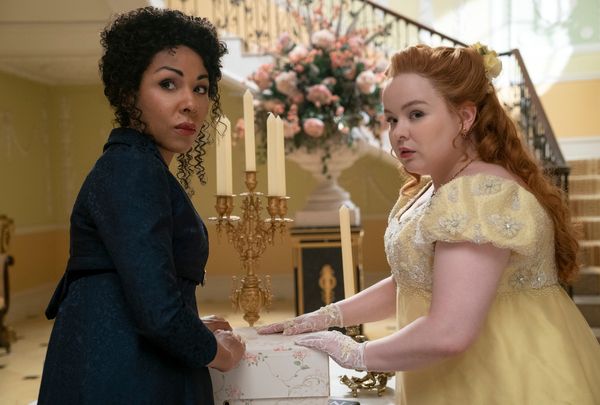 Kathryn Drysdale as Madame Delacroix, Nicola Coughlan as Penelope Featherington on “Bridgerton” (Liam Daniel/Netflix)Gossip writers like Hedda Hopper had huge readerships at the time. Hopper’s numbered 35 million. But Hopper also was a vocal supporter of The House Committee on Un-American Activities, targeting actors and screenwriters for blacklisting, including accusing them of being communists and going after Ingrid Bergman for being pregnant out of wedlock.

Lady Whistledown is on no payroll but her own.

Lady Whistledown is on no payroll but her own. She answers to no one. But with no editor, no newspaper and no real friend who even knows what she does (except Madame Delacroix who has her own reasons for cooperating), the writer has no oversight. No one to ask: Has she gone too far?

Will Penelope regret some of her whisperings, the way that 2000s internet gossip maven Perez Hilton, who called abuse survivor Evan Rachel Wood a “whore” and mocked Britney Spears’ mental health, now does? Once Penelope’s friends find out, will they treat her differently? (This season only begins to address the fallout when Eloise susses out the truth.) Will the queen? And how much danger can a young woman of this time be in for speaking, not only her own mind, but trying to influence others?