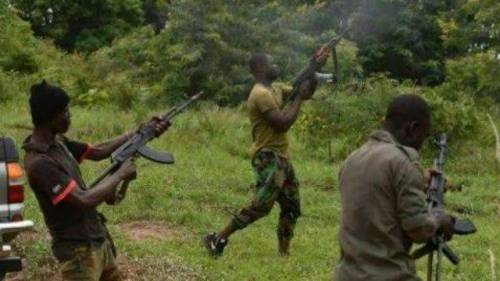 Gunmen on Sunday attacked officials of the Federal Road Safety Corps (FRSC), killing two of them.
The officers were reportedly conducting a routine patrol operation along Igbo-Uku- Uga route in Anambra State at about 2.45 pm when the gunmen opened fire on the driver and two other officials while the fourth official escaped into the bush.

The Corps Education Officer, Bisi Kazeem, confirmed the incident in a statement.
Kazeem said the team leader, who sustained injuries, was rushed to a hospital for treatment.
The statement read, “The Corps Marshal, Dr Boboye Oyeyemi, who was visibly touched decried the attack while condoling with the families of the deceased staff, the unit commander and staff of Igbo-Uku command, and the entire management and staff of the corps over the loss and prayed for their souls to rest in peace.”
Oyeyemi also assured that the corps is working with the Nigeria Police Force and other security agencies to ensure that the attackers are arrested and brought to justice.

“Trump is losing it on Truth Social”: Trump has a lot to say after getting hit with Jan. 6 subpoena

“It is not a legal argument”: George Conway destroys Trump’s “nonsensical” court filing

Momentum to “replace Sinema” already building after she ditches Dems

Image Source Whether it’s blazing hot or you’re bundled up in layers of fall sweaters and scarves, wearing sunscreen daily