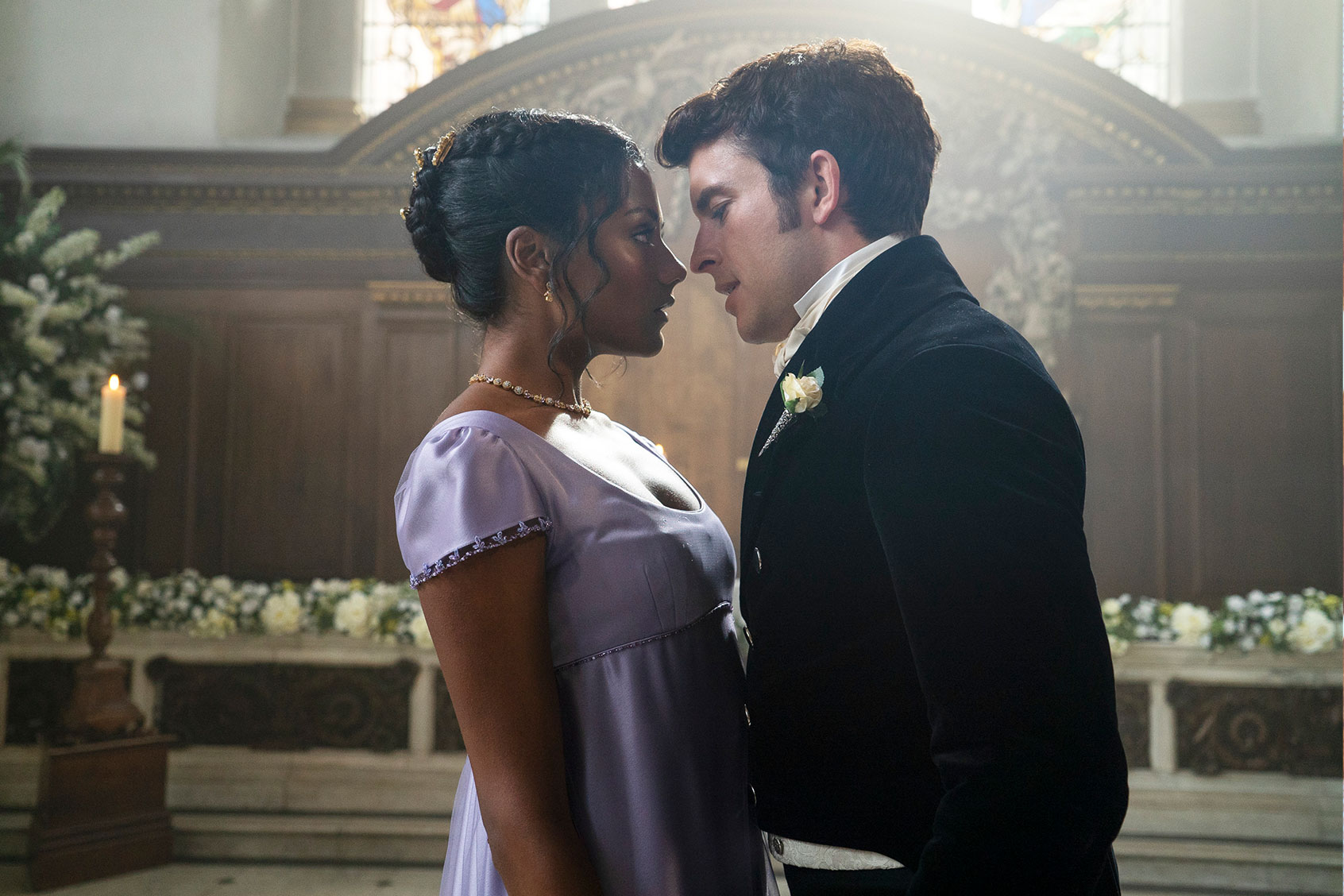 To the delight of the world’s easily scandalized gentlefolk, “Bridgerton” and “Sanditon” returned for their respective second seasons with less sex and more balls, the kind that involves dancing. Jubilation ensued, especially among Netflix viewers, who proved over the weekend following the second season premiere that cutting back on the diddling did not adversely impact on the show’s popularity.

Quite the contrary, actually. According to ratings released by the streamer, the second season of “Bridgerton” became the most-watched English-language in its history during that span of time.  In no way is this development entirely unexpected, given how briskly Shonda Rhimes’ Regency Era romp became the mood-lifting phenomenon of 2020. The first season makes the most of Regé-Jean Page’s smoking bod by showing his 19th century stud Simon Basset, Duke of Hastings, winning the heart and hand of Daphne Bridgerton (Phoebe Dynevor).

RELATED: A less sexy “Sanditon” doesn’t evolve the plot, but so what? That’s not why people watch

That drama’s athletic displays never came close to its streaming contemporary’s daring, but the mere glimpses of an old fashioned and one episode’s brief but explicitly shown trip to pound town was enough to cause protestation.

Easing up on the boot-knocking is on brand for public television. Dialing it down in “Bridgerton” instead of ramping up makes less sense, until one accounts for the other major commonality the shows share, beyond their Austen influence: their fixer-upper leading men Anthony Bridgerton (Jonathan Bailey) and Alexander Colbourne (Ben Lloyd-Hughes).

Austen’s allure is in the exacting set of rules . . .

Many adherents to Regency-era screen adaptations view the subgenre as one of the last bastions of chaste subtlety. Austen’s allure is in the exacting set of rules society of her time imposes on courtship; it takes so little to sully a decent lady’s reputation. Rumor alone can be enough.

But men have it differently; ’twas ever thus. “Bridgerton” creator Chris Van Dusen and his writers treat Anthony’s first season dalliances with a note of comedy; our first eyeful of his bare rump arrives barely three minutes into the “Bridgerton” series premiere, as he’s railing his opera singer lass against a tree.

Still, even a lord with a frequent customer discount at the local brothel must prove himself worthy of the lady he sets his heart upon, to wnl over her family and, more to the point, the audience. For Anthony to be worthy of the high-spirited, independent-minded and fetching Kate Sharma (Simone Ashley), he must prove his worth by simmering down before settling down.

That he does. In the latest episodes Anthony’s trysts with professionals are portrayed as maintenance, something as necessary to the head of a great house as managing the estate’s financial affairs. But even as he swears off all that in his quest to find a wife, he cannot overcome the larger obstacles of Kate’s hard-headed refusal to marry, equaled only by devotedness to securing a proper marriage for her sister, the Queen’s “diamond” Edwina (Charithra Chandran).

Adding to all this frustration is Kate’s professed resentment toward Anthony, which hatches after she overhears him telling his friends he wants to marry for quality and legacy, not for love. What she doesn’t know, and we all do, is that he’s already smitten by the unattainable Kate.

“Sanditon” traffics lightly in such firestarting, although Charlotte Heywood (Rose Williams) displays a tendency to attract and fall for grouches whose gentlemanly hearts hide under an mountain of frowns and negging. As mothers have been reassuring crestfallen girls since the first time a boy picked on them during recess, the mutual exchange of insults is commonly understood to mask true love. 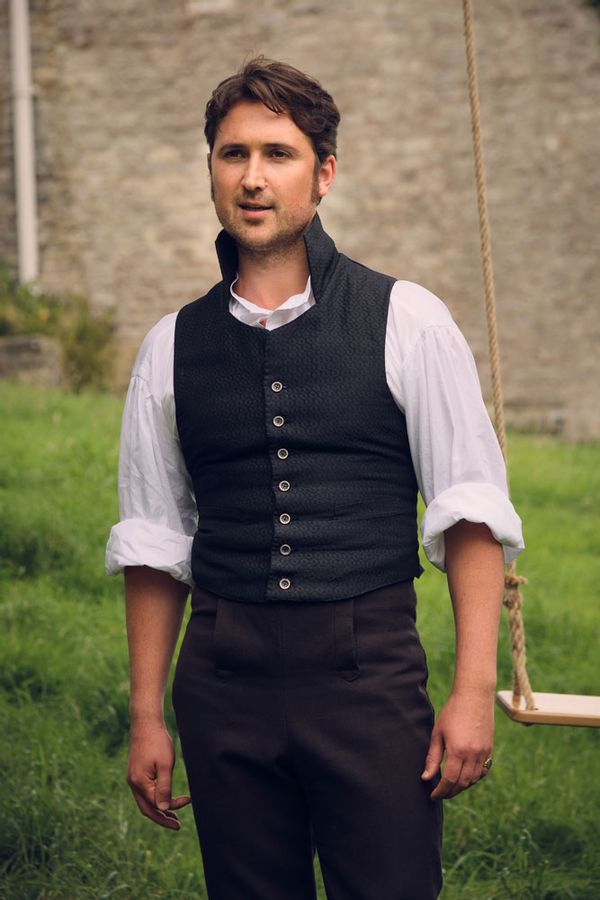 Sanditon (Courtesy of Joss Barratt © Red Planet)At the moment, Charlotte’s relationship with Alexander – or Mr. Colbourne, as a refined miss would say – is that of a hardworking, dutiful governess eager to succeed at her first real job and prove her doubters wrong. But Mr. Colbourne is the toughest of customers, a widower who has been withdrawn from life so long that he’s forgotten how to interact with people and invariably comes across as bitter.

Charlotte becomes determined to win the respect of the older of his two girls, who is harder to crack. Bringing Colbourne out of his shell becomes a supplemental project which, predictably, leads him to behave more warmly toward the highly desirable and as-yet unspoken for Charlotte. She may or may not end up as his wife, but she could become one of the few women in history to fix an impossible man.

Delayed gratification can be a wonderful thing, a notion “Sanditon” plays with by showing Colbourne’s icy emotional wall melting slowly; he can’t resist Charlotte’s pure-hearted warmth for much longer. “Bridgerton,” however, transforms restraint into foreplay by making Kate and Anthony’s quickening heartbeats and passionate, sharp breaths into a soundtrack of yearning, stretching the “will they, won’t they” tease to its trembling limit until, at last, they give in.

Obviously no one takes issue with sex in “Bridgerton,” or even any PG version “Sanditon” may someday feature. Far from it. It’s the bad sex we can live without, the kind that slams right to the point and never bothers to stoke our furnace. That’s where this “Bridgerton” season wins over the original. By denying Kate and Anthony an easy path to bedded bliss, their consummation of their passions is an even bigger turn-on.

Their post-nuptial interlude is much shorter, alas . . .

Better still, the event itself takes its time. Their post-nuptial interlude is much shorter, alas, robbing romantics of a view into joy-filled wedded pleasure.  Maybe that’s a feat “Sanditon” can pull off – tastefully of course, in a way that meets broadcast standards and through characters who successfully pass through the proper courtship channels. (That would also balance out the show’s standing depiction of rough sex as punitive, since the characters who do the deed end up disowned and disgraced.)

But it’s more likely that “Bridgerton” can build on this season’s more demure presentation, making its third and fourth season romances even more nuanced and, therefore, steamier. As its ratings prove, its viewers are happy to wait.

“Bridgerton” is currently streaming on Netflix. New episodes of “Sanditon” air at 9 p.m. Sundays on PBS member stations. Watch a preview for Episode 3, via YouTube:

Adele’s Las Vegas Residency Is Back On

Meme’s Oatmeal Cake is a buttery, autumnal treat for even the most beginner baker