Can you imagine a FIFA World Cup in Qatar without Egypt’s Mohamed Salah or a tournament in which the three times African champions (Nigeria) fail to qualify?

The bad news for these two teams and their fans is that they have seen their Qatar 2022 dreams extinguished during the World Cup playoffs. Nigeria aimed to reach their fourth world cup finals in a row and equal the African record set by Cameroon. But an early goal from Thomas Party was enough to secure Ghana’s place at the 2022 Qatar World Cup as they beat Nigeria on away goals after a 1-1 draw in the second leg of their qualifying playoff. The visitors took the lead after just 11 minutes when Thomas Partey fired from range toward a goal. The effort looked more than comfortable for Super Eagles goalkeeper Francis Uzoho, but he made an awful mess of the shot to gift the Black Stars a vital away goal. Nigeria level on the night just 10 minutes later when captain William Troost-Ekong scored from the penalty spot following a VAR check on Denis Odoi’s challenge on Ademola Lookman. The Nigerian side thought they had completed the turnaround just before half-time, but Victor Osimhen’s goal was ruled out for offside by the VAR. Although the hosts were the dominant side in Abuja, they could not find the all-important winner after the interval. The Super Eagles were unable to break down an impenetrable Black Stars defence in the second half, bowing down to defeat via the away goal rule. The result means the Super Eagles will not represent Nigeria at the 2022 World Cup in Qatar. Following the defeat, the home supporters burst onto the pitch at the full-time whistle, destroying the dugouts and advertising boards around the Abuja National Stadium, which has a capacity of 60,000 fans. Police were gradually called into the stadium to reestablish control using tear gas but not before the celebrating Ghana players had fled the scene.

To those who wonder why human beings get angry when there is a missed chance in football. To people who cannot make sense of the distress after a crushing defeat. To anyone who wonders why emotions run so high when a team crashes out of a tournament. To anyone who says football is just a game, thus, there is no need to fight. Let me be clear that football is not only a game. It is a sport with life, overpowered by passion. Hence, football is not only a sport but also life in its entirety. Before the match, the Nigerian coach assured Nigerians that he was not a pushover. According to Eguavoen, he was not in any way under pressure. He promised Nigerians a win at the end of the 2022 FIFA World Cup second leg playoff against Ghana. He was optimistic about the Super Eagles’ victory at the end of the second leg. Unfortunately, however, the Super Eagles lost the game as Ghana deservedly claimed its place in Qatar this November. Before the playoffs, the Super Eagles had suffered elimination in the last-16 of the Africa Cup of Nations in Cameroon. They also played a goalless draw with Ghana in the first leg of their 2022 World Cup qualifying playoff in Kumasi, Ghana. A 1-1 now means they missed out on a World Cup in a few months.

Meanwhile, some Nigerians have described the act of the fans as a show of shame while condemning the vandalism. They argued that fans should not have vandalised the renovated Abuja National Stadium. According to some Nigerians, the violence and destructive mentality of the youths are worrisome. For some, the show of shame at the National Stadium was never about the match outcome. It was about Nigerians looking for where to vent their anger and frustrations. For example, the leadership in the country has made everyone an angry mob. Hence, the coming days will not be easy for Nigerians and the nation. Others have argued that there is no justification for whatever has happened at the National stadium. For them, Nigerians should condemn it. They urged the youth to take their frustration to their respective homes. Indeed, it is the team that played woefully and lost. The stadium is not the cause of the loss.

Many of us are angry at the damage seen at the National Stadium. In the modern world, vandalism is not the answer. Neither is vandalism the solution. Vandalism is always wrong. There is no excuse for vandals to damage property belonging to others or the community. There should be no justification for such behaviour. Hence, vandalism should not be tolerated in the community. It should be considered a criminal act punishable by the law. Thus, instead of pouring our anger and revenge on properties, the youth should channel that anger in 2023 with their PVC. Many people may say that their vote does not count. And those who did not turn out may feel their voice does not matter. The non-voters usually say that nothing ever gets done and that voting does not make much difference in their life. For others, they do not trust the system or that all this corruption makes their vote worthless. Some will tell you that they do not care who wins the election because no elected politician is willing to help the masses during the dark times. Others do not feel represented by the candidates the parties in power keep presenting. But I tell you that it will make a difference if we all contribute. To vote is one of the most direct ways to participate in democracy. It is more than just electing a candidate. It is choosing the right policies and people who have your best interests in mind when making decisions that affect our community, state, and nation. When we vote, we are taking an active role in deciding policies regarding health care, security, equal opportunity, infrastructure, jobs, education, minimum wage, sports, and welfare. Voting is a vital way to hold politicians accountable, to tell them how we feel about their policies and performances. It is also a way to remove politicians from office when we are unhappy with their policies and performance. A genuine change can occur only through our vote. Voting gives us the power to choose how our leaders will run constituency, state, and country. Voting is the only way to turn things around in this country. A single vote can make a difference. Hence, the important message is to register and have our PVC ready. We all have a responsibility and a choice to vote where our voices will matter most. It is the only way we can get the candidates that we desire. If we do not vote, we should not complain! Let us go and get our PVC to decide our future before someone else does it for us. Do we want someone else to decide the laws and policies that will affect our family and community? Your vote matters. Your vote is your voice. It is as simple as that.

Rev. Ma, S.J, is a Jesuit priest and doctoral student in public and social policy at St. Louis University in the state of Missouri, USA. 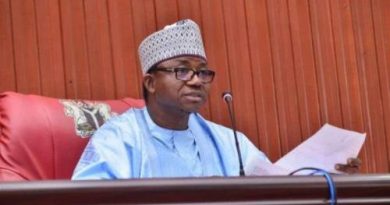