President Muhammadu Buhari Friday in Abuja admonished the Economic and Financial Crimes Commission (EFCC) to avoid being used for partisan politics or getting dragged into personal disputes.

Buhari urged the anti-graft agency to focus on serving the nation to entrench good governance.

The President spoke on Friday at the Unveiling of the EFCC Standard Operating Procedures, Policies and Manuals, at the State House as disclosed by the Special Adviser to the President on Media & Publicity, Femi Adesina.

He also advised leaders and all operatives of the commission to resist the temptation of being influenced by political actors for personal gains or to score political points.

“I must advise the leadership and operatives of this commission to resist the temptation of being used for partisan politics or be dragged into personal disputes. Your job is to serve the nation in its efforts to entrench good governance,’’ he said.

Sources however told SaharaReporters that the President was only trying to silence the EFCC following the agency’s encounters with some of his political associates, which the affected cronies considered as embarrassing.

The National Leader of the All Progressives Congress (APC), Bola Tinubu, and former governors of Imo and Nasarawa states, Rochas Okorocha and Abdullahi Adamu respectively, have all complained about the anti-corruption agency in the course of doing its job.

They accused the EFCC of being used by their adversaries as a tool for political witch-hunt.

“He (Buhari) is using that to silence the EFCC because Rochas Okorocha complained recently. Adamu Abdullahi was embarrassed. Tinubu reportedly was forced to write a statement recently,” one of the sources said.

During a meeting with Buhari at the Presidential Villa, Abuja, in February, Okorocha sought the intervention of his host over what he described as unjust harassment by the EFCC.

Speaking to correspondents after the meeting, he said: “I also used this opportunity to intimate Mr President of what is going on between me and Economic and Financial Crimes Commission and the harassment and intimidation that I’m getting from the EFCC, literally on daily basis, and to inform him that I have court judgment and two court orders for different judgments at different forums, which stop the EFCC from harassing and intimidating me. EFCC has refused to obey the law.

“And so I have to inform Mr President that EFCC should be made to obey the law that established it. And without the law, there wouldn’t be an EFCC. And the desperation with which they go about any affair that concerning me, should stop.

“And I reminded Mr President that recall that sometime ago, the EFCC had claimed that they recovered the sum of N5.9 billion from my account, which the court found out to be untrue.

“In other words, they were biased and they prejudged me. On that basis, the court ruled and ordered that they should not further interrogate and harass me. This has also not been obeyed.
“The court ordered the EFCC to release my international passport, the EFCC has refused to obey. The court gives damages to me for some N500million for EFCC to pay. EFCC has not paid that. “Rather than doing that, on the day of my declaration, EFCC went on the press to announce that I’m being prosecuted for some criminal charges of N2.9billion and no more than N5.9billion.

“So, I said as the president of the Federal Republic of Nigeria, and one that stands on the side of the law, he should bring this to the attention of the EFCC.”

SaharaReporters earlier reported how Adamu, the President’s choice for APC National Chairmanship, who served as governor of Nasarawa between 1999 and 2007, was in March 2010 arraigned by the EFCC at the Federal High Court in Lafia.

The President, however, commended the leadership of the EFCC for securing 2,220 convictions within a year and recovering over N152 billion and $385 million.

“Ladies and Gentlemen, I am glad to note that the war against corruption, which is one of the cardinal objectives of this administration, is being strengthened through the institutionalisation of operational procedures, particularly as they form the building blocks of transparency and accountability in administration and public expenditure,’’ he said.

Further commending the EFCC chairman, Abdulrasheed Bawa, Buhari noted the efforts of the agency’s leadership to institutionalise the commission by developing 26 Standard Operating Procedures and 25 Policies and Manuals for the Departments, Units and Staff of the Commission.

The President said, “Ladies and Gentlemen, these outstanding feats achieved are being unveiled today and I would like to use this opportunity to encourage other Ministries, Departments and Agencies of Government, especially Law Enforcement Agencies to also ensure the standardization of their processes within the extant laws and regulations as provided in our statutes.

“I need not underscore the importance of today’s occasion but let me remind you that the stakes are high but national expectations are higher. Therefore, we must continue to strive and deal decisively with matters in accordance with the rule of law.

“On the part of the Government, we shall continue to accord all necessary support to MDAs in order to ensure the sustainability of the initiatives already commenced in actualising our vision of a corrupt-free society.

“Let me conclude by saying that the fight against economic and financial crimes in Nigeria is a collective responsibility of all Nigerians if we are to make meaningful progress as a nation.

“I invite you all to fight corruption in all its ramifications and join us to entrench good governance values and integrity within all our systems. As I have often said, ‘If we do not kill corruption, corruption will kill us as a nation.’”

Also according to Buhari, the development of the Standards demonstrate the commitment of this administration to the fight against corruption and the acceptance of transparency and willingness to be subjected to scrutiny against set standards by services.

“This is a confirmation of national efforts against graft,’’ he said, adding: “I understand from your remarks Mr. Chairman, that these are the first collection of policy documents ever developed in the 18 years of the Commission’s existence aimed at defining the institutional rules and operational guidelines while instituting uniformity in standards, improving efficiency and removing discretion from your operations. These are indeed remarkable achievements and are very commendable.’’

The President assured of a rules-based system in government business while providing the necessary enabling environment for effective implementation.

“You may recall ladies and gentlemen, that since we came into power in 2015, we have consistently demonstrated the necessary political will to fight corruption. We have ensured the operational independence of the Anti-graft Agencies, strengthened the legal framework, empowered the regulatory agencies and provided adequate funding to support the fight against corruption,’’ he added.

In his remarks, the Chairman of EFCC noted that the institution was undergoing various phases of reforms to reposition it for the task of fighting financial crimes in the country, with the production of policies and manuals.

The chairman thanked the President and the National Assembly for the confidence reposed in his “ability and competence’’ to take over the leadership of the organisation in 2021.

Bawa said departments had been reorganised and upgraded, including intelligence gathering, training and the academic institutions, to meet the demands of the job, adding that software had been developed for operations, and a mobile app, “The Evil Eye”, deployed for ease of reporting economic and financial crimes from the comfort of homes. 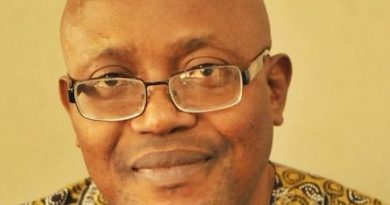 Yemi Ogunbiyi Showed Me The Still Waters, By Owei Lakemfa