A resolution has been reached by the lawmakers in the Senate and House of Representatives to appeal a judgement which directed the Attorney-General of the Federation (AGF) and Minister of Justice, Abubakar Malami, to delete Section 84 (12) of the newly signed Electoral Act.
The decision was made following a deliberation on the court order during Wednesday’s plenary in both chambers of the National Assembly in Abuja.

President Muhammadu Buhari had objected to the provisions of Section 84 (12), which read, “No political appointee at any level shall be voting delegate or be voted for at the Convention or Congress of any political party for the purpose of the nomination of candidates for any election.”
The President believes the section constitutes a disenfranchisement of serving political office holders from voting or being voted for at conventions or congresses of any political party, for the purpose of the nomination of candidates for any election in cases where it holds earlier than 30 days to the national election.
He later asked the National Assembly to amend the section of the Act, but the request was rejected by the lawmakers.
On Friday last week, Justice Evelyn Anyadike of the Federal High Court in Umuahia, Abia State ordered the AGF to delete the section from the Act.
She held that the section was unconstitutional, invalid, illegal, null, void and of no effect whatsoever and could not stand, saying it was in violation of the clear provisions of the Constitution.
However, during the Wednesday’s plenary, Senator George Sekibo and scores of other senators at the Senate sponsored a motion on the urgent need to appeal the judgement of the Federal High Court in Umuahia on the suit on the controversial section of the Act.
Senator Sabi Abdullahi who seconded the motion described the move as a timely intervention, saying its content was straightforward.
Senator Gabriel Suswam, who also supported the motion, believes time is of the essence and the motion is straightforward for the appropriate channel to appeal.
“In making an appeal, we do not necessarily need the guidance of the Committee on Judiciary, Human Rights and Legal Matters,” he said. “I think we should just go ahead and pass this motion as presented.”
The lawmakers, in their resolution, agreed to appeal the judgement in suit marked FHC/MU/SC/26/2022 to set aside the decision of the court.
For members in the lower chamber, the clause in question is directed at political appointees and not civil servants.
They insisted that the court passed a judgement on a matter which was not included in the Electoral Act passed by the National Assembly.
They also questioned why the National Assembly was not joined as a respondent to the suit, stressing that the action of the judge was an ‘aberration’.
While the lawmakers hinted at writing a petition to the National Judicial Council (NJC), the Speaker of the House, Femi Gbajabiamila, said he would not allow the National Assembly to be ridiculed.
Just like his colleagues, he queried why the judgement was obtained in faraway Abia State, insisting that only the National Assembly had the constitutional authority to alter any part of the legislation which it passed.
Gbajabiamila, therefore, appealed to the AGF not to hastily implement the court judgement, and not to get into the legitimate functions of the National Assembly. 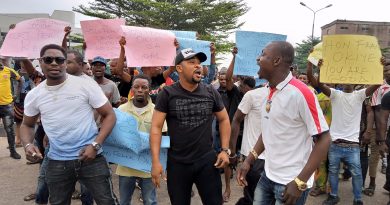 Fox & Friends host stumps Kristi Noem: Why did Trump “have all that secret stuff at Mar-a-Lago?”