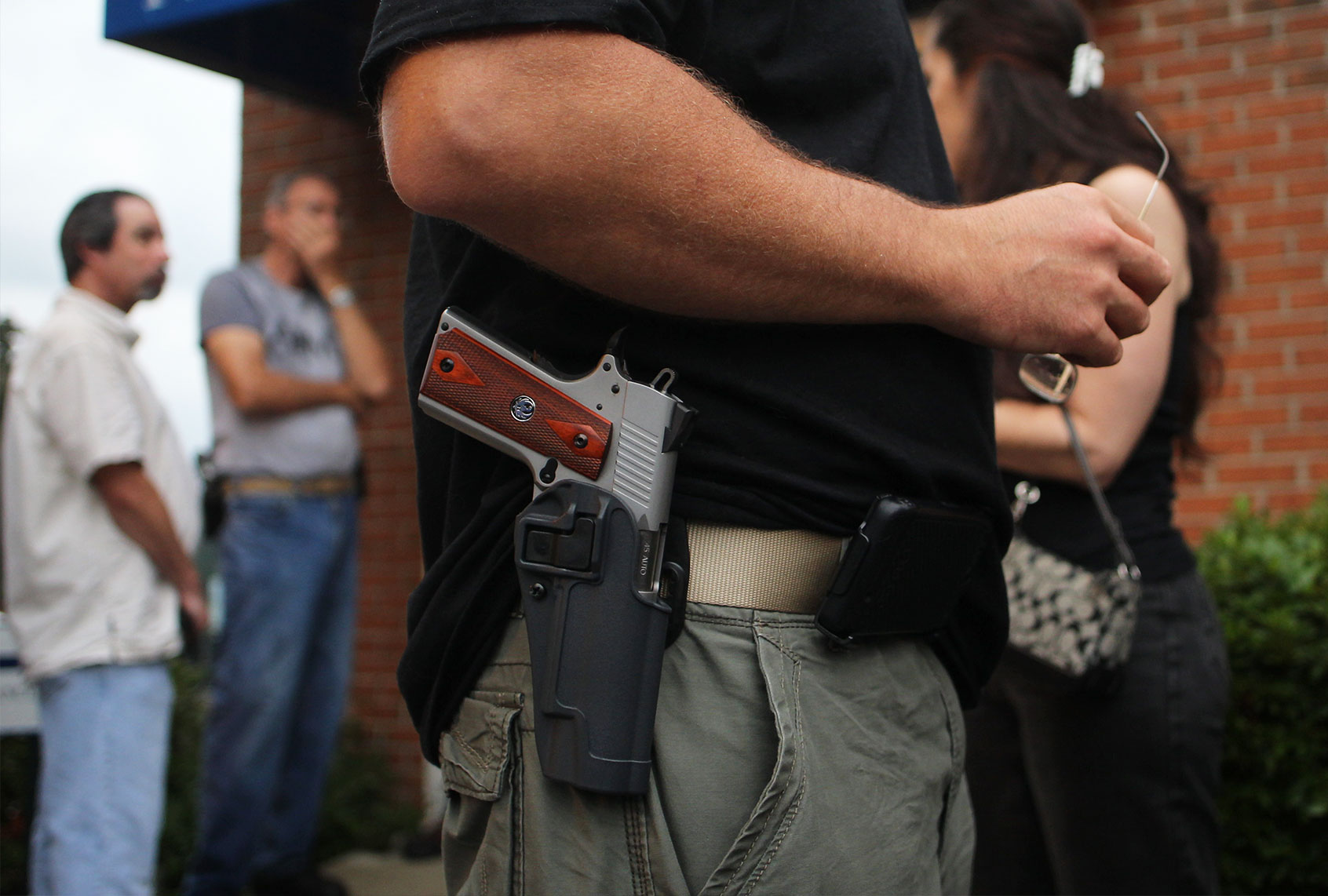 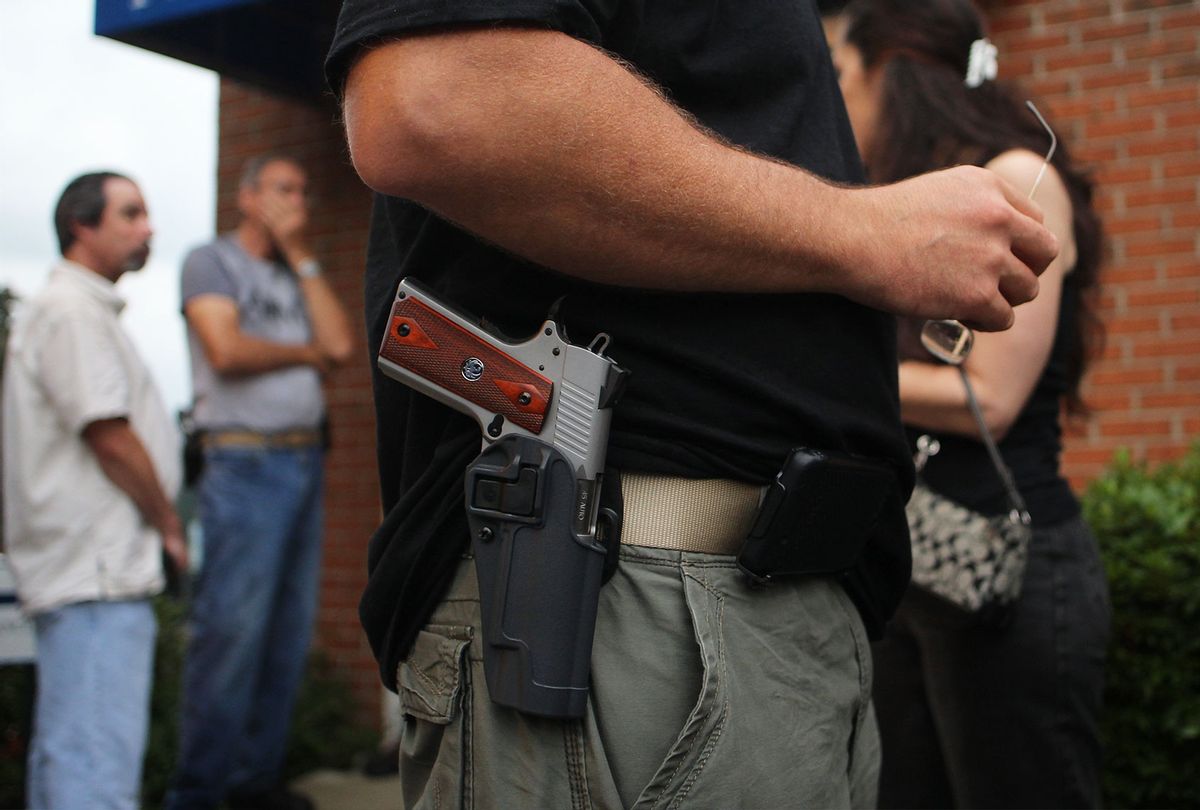 Voting rights groups have filed a lawsuit seeking to stop a pro-Trump group from going door-to-door in Colorado in search of evidence to support voter fraud allegations that have already been debunked and rejected by courts.

The lawsuit alleges that the U.S. Election Integrity Plan — led by Shawn Smith, an ally of former Trump strategist Steve Bannon and MyPillow founder Mike Lindell — is sending armed members door-to-door in areas with large numbers of voters of color, questioning people about how they voted and taking photographs of their homes.

The lawsuit, which is backed by the state chapter of the NAACP, the League of Women Voters and Mi Familia Vota, alleges that the “voter intimidation” campaign violates the Voting Rights Act of 1965 and the Ku Klux Klan Act of 1871, a post-Civil War law aimed at preventing white vigilantes from terrorizing Black people to stop them from voting.

The lawsuit cites the “County & Local Organizing Playbook” used by the group, which instructs members to “undertake citizen audit activities to either refute or confirm serious allegations of election malfeasance” in order to “support future legal action.” The group, some of whose members are armed, has been going door-to-door in El Paso, Mesa and Weld counties in Colorado, using public voter lists to identify areas where they believe ballots were fraudulently cast, the Colorado Times Recorder reported last year. The report prompted an alert from Colorado Secretary of State Jena Griswold, who warned voters of unofficial canvassing efforts and urged residents to report harassment and threats to local law enforcement or the Justice Department.

“Defendants’ objectives are clear. By planning to, threatening to, and actually deploying armed agents to knock on doors throughout the state of Colorado, USEIP is engaged in voter intimidation,” the lawsuit states. “USEIP’s public-facing actions are a clear signal to Colorado voters — especially voters of color — that to vote in an upcoming election means facing interrogation by potentially armed and threatening USEIP agents at their doorstep thereafter.”

The lawsuit claims that some members have worn “badges” and falsely accused voters of fraud.

“Sometimes armed and donning badges to present an appearance of government officiality, USEIP agents interrogate voters about their addresses, whether they participated in the 2020 election, and — if so — how they cast their vote,” the complaint says. “It is reported that multiple agents have claimed to be from ‘the county,’ and have, without any evidence, falsely accused the residents of casting fraudulent ballots.”

The voting rights groups say the group’s efforts to seek out areas where they believe voter fraud occurred has largely focused on high-density housing areas and communities experiencing a growth in the number of minority voters.

“No one should have to be afraid to go to the polls or fear that doing so will mean being threatened in their own homes,” Courtney Hostetler, senior counsel for Free Speech for People and one of the lawyers leading the lawsuit, said in a statement. “Free and fair elections can only occur when people know that they are able to safely vote without reprisal or intimidation.”

The group’s “playbook” thanks Lindell, a leading election conspiracy theorist. Smith, the group’s founder, attended Lindell’s election conspiracy-laden “symposium” last year in South Dakota along with former Colorado election clerk Tina Peters, who was indicted earlier this month for her role in leaking sensitive voting system data that was published by QAnon conspiracy theorists and right-wing websites. Griswold’s office said earlier this year that Smith had also convinced another election official, Elbert County Clerk and Recorder Dallas Schroeder, to make copies of his office’s hard drives that he later gave to “unauthorized people in violation of Election Rules.”

Shawn Smith, the head of USEIP last month led a “lock her up” chant while discussing Griswold at a rally and said that “if you’re involved in election fraud, you deserve to hang.”

He can also seen in a video among a group of violent Trump supporters who clashed with police outside the Capitol on Jan. 6, 2021. He was accompanied by Colorado state Rep. Ron Hanks, a Republican candidate for U.S. Senate who has also pushed false election claims.

Smith is also the president of another “election integrity” group called Cause of America, also funded by Lindell, which Smith announced on Bannon’s “War Room” podcast.

USEIP appears to have fully embraced the QAnon conspiracy theory. Its website and the first page of its “playbook” include the slogan “We Are the Plan,” frequently associated with QAnon believers. During a presentation organized by Sherronna Bishop, the former campaign manager for Rep. Lauren Boebert, USEIP leader Cory Anderson (who is also a member of the anti-government Three Percenter militia) described the briefing as “being red-pilled,” according to the Times Recorder. (That expression, originally drawn from “The Matrix,” is popular among QAnon followers and other far-right conspiracy theorists.)

The lawsuit names Smith, as well as co-founders Holly Kasun and Ashe Epp, who was also at the Capitol on Jan. 6, 2021.

It alleges that their attempted canvassing for election fraud evidence had the “purpose and effect of intimidating Coloradans from voting, trying to vote, helping others to vote, supporting or advocating for certain political beliefs, or exercising the right to speak, peaceably assemble, or petition the government for redress of grievances, in violation of Section 11(b) of the Voting Rights Act.” The suit also accuses the group of violating a section of the Ku Klux Klan Act that bans “conspiracy to interfere with civil rights.”

“Sadly, efforts to intimidate voters are nothing new,” NAACP general counsel Janette McCarthy Wallace said in a statement. “The NAACP has a long and proud history of opposing those who would seek to thwart democracy. We could not sit idly by and allow voters to potentially be bullied out of exercising their rights.”

The lawsuit does not offer specific examples of voters being intimidated or harassed by armed canvassers, but last year USEIP leader Charity McPike urged armed members to provide “security” for the group.

“We are attempting to line up security. However, anyone who carries protection might want to let us know so we can offer your cell phone numbers to those who are concerned,” McPike said, according to Colorado Pols.

“No voter should ever feel threatened in the safety of their own homes,” Celina Stewart, League of Women Voters chief counsel, said in a statement. “The nefarious actions of the USEIP are a blatant form of voter intimidation used to target and with the intent to silence Colorado voters of color, which is in clear violation of the Voting Rights Act.”

The USEIP is also working with the Colorado Republican Party on its “Election Integrity Operations,” according to the Times Recorder. A USEIP member is in charge of the GOP’s program and has given joint presentations with Epp, the group’s co-founder. Heidi Ganahl, the leading Republican candidate for Colorado governor, promoted the group during a recent event, declaring that they are “doing great things.”

USEIP did not respond to a request for comment. The group’s website says it plans to expand to other states, including Arizona, Georgia and New Hampshire. Its training materials are already being used by conspiracy theorists in Utah who call themselves the Utah Voter Verification Project, according to the Salt Lake Tribune.

Residents in Hurricane, Utah, alerted Washington County officials in December that members of the group, who refused to identify themselves, showed up at their doors with personal voter information, according to the report. The members also recorded voters without their consent.

“We can record anyone without telling them. We don’t need permission,” one unidentified trainer told the outlet. The group’s training manual also stressed that “you do not have to identify yourself at all.”

The goal of the Utah group appears to be to collect affidavits from voters who claim to have evidence of illegal votes. In the wake of Trump’s 2020 defeat, his legal team attempted to submit voter affidavits to prove their debunked allegations, but those efforts were almost entirely rejected by judges and discredited by election officials.

There has been no credible evidence of voter fraud in Utah, which Trump won by more than 20 points. Republican Gov. Spencer Cox and Lt. Gov. Deidre Henderson condemned those who are spreading “misinformation” about the election and dismissed claims of fraud as “absolute falsehoods.”

Other Trump supporters have tried similar door-to-door audits. Cyber Ninjas, the bankrupt company that led Arizona’s failed “forensic audit,” sought to send canvassers door-to-door in Maricopa County but ultimately relented after the Justice Department warned that such an effort would violate federal laws against voter intimidation.

Another group called the New Mexico Audit Force also sent its members door-to-door in heavily Republican Otero County, which had already spent $50,000 on an “audit” confirming that Trump had won the county by more than 25 points. The House Oversight Committee last Thursday announced a probe of the effort, warning that the audit “illegally interferes with Americans’ right to vote by spreading disinformation about elections and intimidating voters.”

USEIP also appears to have had trouble vetting its volunteers. The group’s training manual says that the group intends to check volunteers’ social media and called on them for a “gut check,” saying leaders had “learned (roundaboutly) that there were a couple of people in our group, who were volunteering for our events, who had a criminal history of sexual misconduct,” and adding, “it’s unfortunate that we must check volunteers for pedophilic leanings.”

Why I Tried To Quickly Leave Nigeria After Handing Over To Soludo – Anambra Ex-Governor, Obiano, Breaks Silence After Detention By Anti-corruption Agency, EFCC