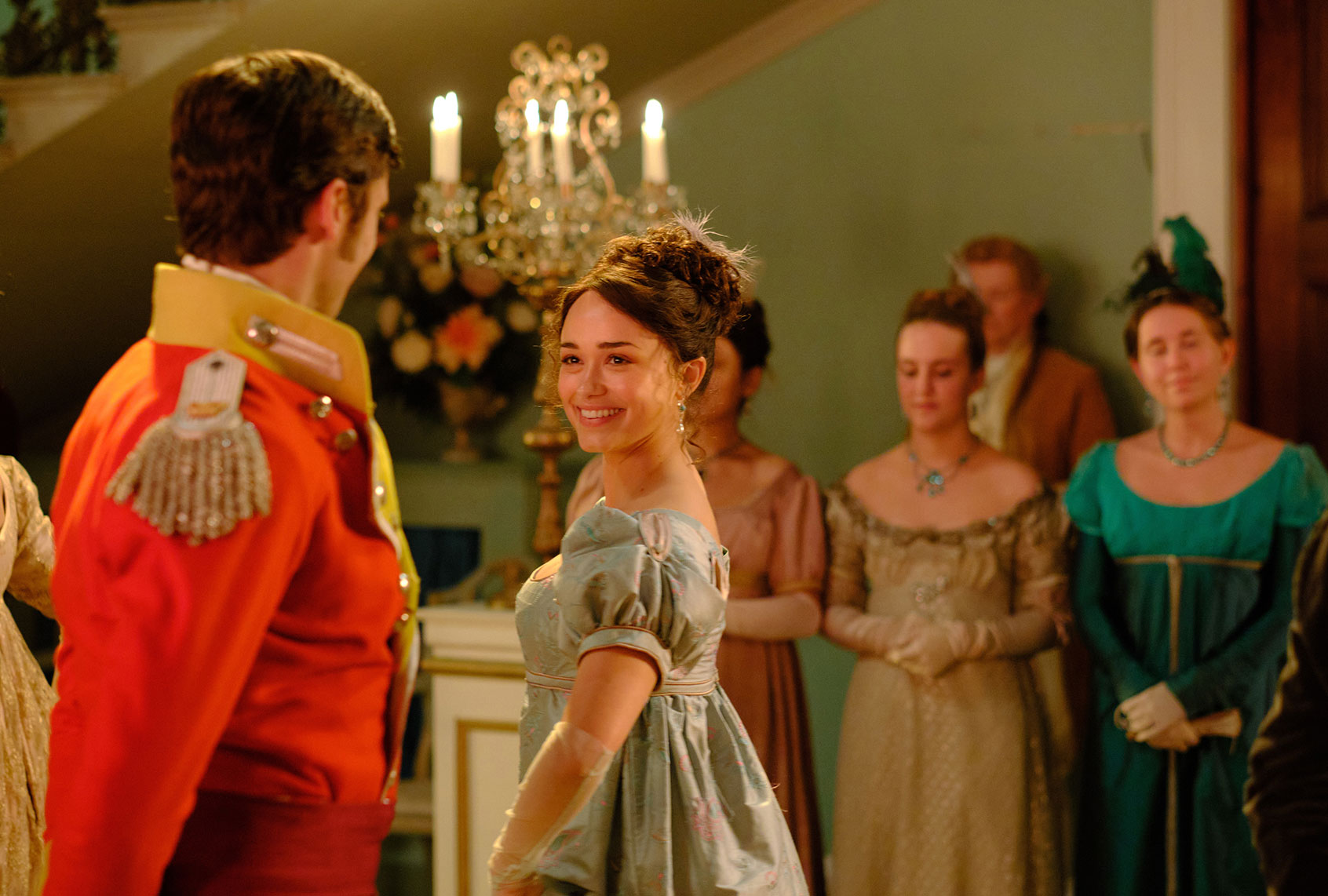 For a while the fate of “Sanditon” was not certain. The show’s original broadcaster ITV cut bait on the seaside period piece due to poor ratings in the U.K., although it fared well enough on “Masterpiece” to garner enough support for ITV-owned BritBox and the venerable PBS series to clear it for a second and third season.

There remained the matter of the first run’s unexpected level of randiness which, while not quite on par with “Bridgerton” did include a rather explicit scene of a nice girl being positively ruined on a marble floor. Loyal Jane Austen fans were shocked – shocked! – that the series’ creator Andrew Davies took the author’s subtle sensual references that far. But much about the first seasons slid further into melodrama than one otherwise expects of a Regency tale.

If you count yourself in that camp, you’ll be pleased to know that the second go passes with nary a handy. The six-episode return is both subtler in tone and a good deal rougher on our central heroines Charlotte Heywood (Rose Williams) and Georgiana Lambe (Crystal Clarke), hewing more closely to the classic “Masterpiece” interpretation of Austen’s world.

RELATED: A worthy return for PBS’ “All Creatures”

Balls are savored and wildflowers gathered. Women contend with worries that lead them to hard realizations of their limitations. “Perhaps I will have to forgo my darning circle!” a concerned lady about town sighs.

Second season showrunner Justin Young and the rest of the writing team take the opportunity afforded by the story’s resort setting to refresh the ranks, as it were, with an influx of new suitors and opportunities for summer romance and regret. 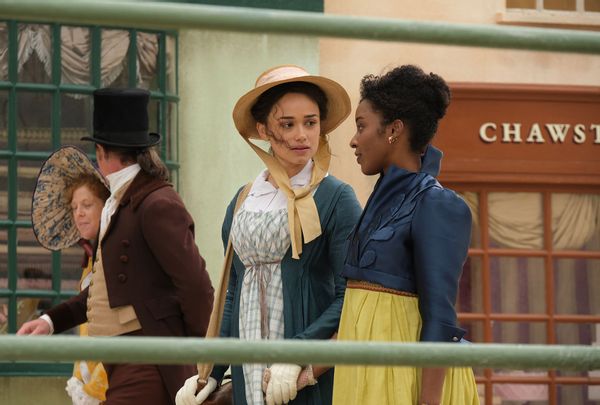 Sandtion (Photo courtesy of Joss Barratt)At least, that is Georgiana’s fear. Now in the care of resort developer Tom Parker (Kris Marshall) and his sensible wife Mary (Kate Ashfield), Georgiana finds herself shooing away all kinds of dudes pitching woo, none of whom she trusts.

Clarke’s character is one of the more complex residents in this story, in that she’s a Black heiress aware of the power her inheritance affords her. She also wields her power by spearheading a genteel protest to raise awareness of the capitalism’s continued reliance on slave labor, one clumsily realized subplot among several.

Still, the story improves as the episodes put some distance between tying off last season’s loose ends. After a point watching Georgiana flex her savvy becomes downright entertaining:  she is not keen to end up locked in an attic, like that Creole woman in another literary classic. (Yes, yes, different author, different era. Point being, Georgiana’s no dummy. She knows how these people do.)

Fearing their ward is growing lonely and bitter, the Parkers invite Charlotte back to Sanditon to keep Georgiana company. And Charlotte is pleasantly stunned to see Sanditon transformed into the bustling seaside resort town Tom Parker envisioned, with its buildings that were destroyed by the fire rebuilt grander and visitors flocking there from across the country.

Joining Charlotte is her wide-eyed younger sister Alison (Rosie Graham), just a girl jonesing for someone to put a ring on it. The Heywood daughters arrive at almost the same time that the place floods with a battalion of British soldiers. Others aren’t so sure of the army’s occupation, temporary though it may be.

None of it matters much to Georgiana, who sticks closely to the side of Tom’s sexless brother Arthur (Turlough Convery), a declared lifelong bachelor happy to click his heels in the friend zone. The redcoat march brings also returns a familiar louche to the Denham’s orbit along with the handsome Colonel Francis Lennox (Tom Weston-Jones) who trains his sights on Charlotte. Next to these men in uniform, Alexander Vlahos’ aloof wandering artist Charles Lockhart is intentionally difficult to peg and the show’s cheesiest new addition. For the same reasons he may also be its most watchable. 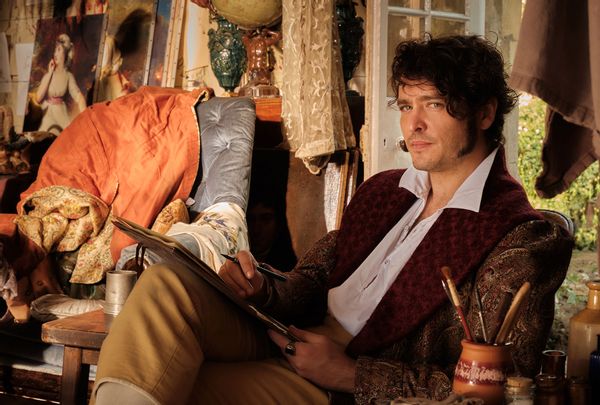 Sandtion (Photo courtesy of Joss Barratt)But like Georgiana, Charlotte resolves to maintain control over her life regardless of society’s demands. Since “society” is primarily represented in town by the cranky Lady Denham (Anne Reid), that seems simple enough to do.

The winnowed-down cast translates to a more disciplined focus on Charlotte, Georgiana, Alison and Lady Esther Babbington (Charlotte Spencer), who also returns to Sanditon for health reasons. Williams’ Charlotte commands central attention as the resident Austen protagonist who, alongside Clarke’s Georgiana, embody grace, good sense and composure above all else.

Spencer’s Esther, in the meantime, floats along in a storyline that’s less connected to the others but eventually takes on the perfume of tragic melodrama. It revolves around a poignant, heartrending story that’s also par for the course in tales like these.

Charlotte’s effort to cope with having been abandoned by Tom’s brother Sidney (played by the smokin’ Theo James) has a more lasting impact. James exited the show due to scheduling conflicts, and you’ll appreciate what a pity that is when you notice the dearth of chemistry Williams has with Charlotte’s new suitors in comparison to what she and James shared. 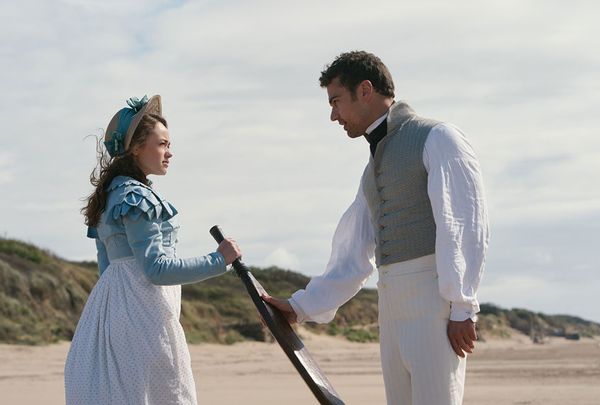 Shown from left to right: Charlotte Heywood (Rose Williams) and Sidney Parker (Theo James) (PBS)Charlotte carries her heartbreak into season 2 by instilling in her stubborn refusal to marry, determining instead that she’d rather make her own way in the world. Austen perpetually pushed back on the common estimation that the greatest tragedy for a woman is to never have wed, which Lady Denham spells out during their first reunion.

“An unmarried woman is a worthless pariah who brings shame and ruin upon her family,” she snorts. “No one chooses to be a spinster!”

Single or otherwise, Charlotte cannot escape intrigue. First it arrives in the form of Alexander Colbourne (Ben Lloyd-Hughes) a surly widower in need of a governess for his two girls. Alexander is unbearable. The older girl is an abusive snob.

To know the corsets-and-lace genre of “Masterpiece” series is to predict, that not all men who look the part of gentlemen are gentlemen, and many brutes are hiding kind hearts, “she can fix him,” et cetera, et cetera. It all winds up with a jaw-dropping cliffhanger, although long before that bomb drops you may pine for more episodes.

Twists notwithstanding don’t expect much in the way of innovation in this second season. But here’s the counter point: who is looking for that? “Sanditon” is designed to be a balmy retreat where everything is easy on the eyes, and where abandoning your cares is the point.. Like the cliffs around the town, this latest stroll has a few trips and bumps, but is never unendurable.

The second season of “Sanditon” premieres Sunday, March 20 at 9 p.m. on PBS member stations. Watch a trailer for it below, via YouTube.

Donald Trump, Macbeth and the ruins of the Republican Party