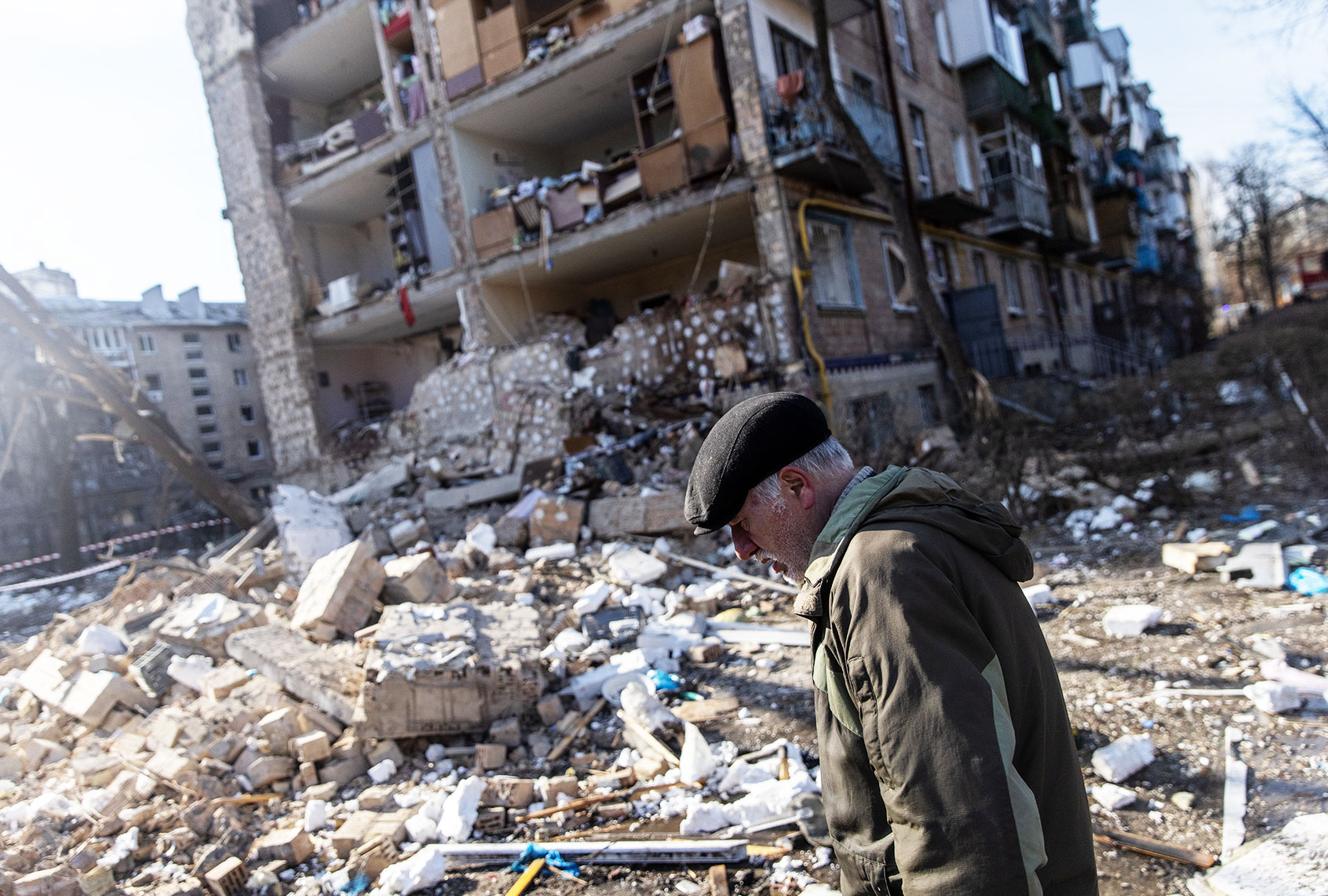 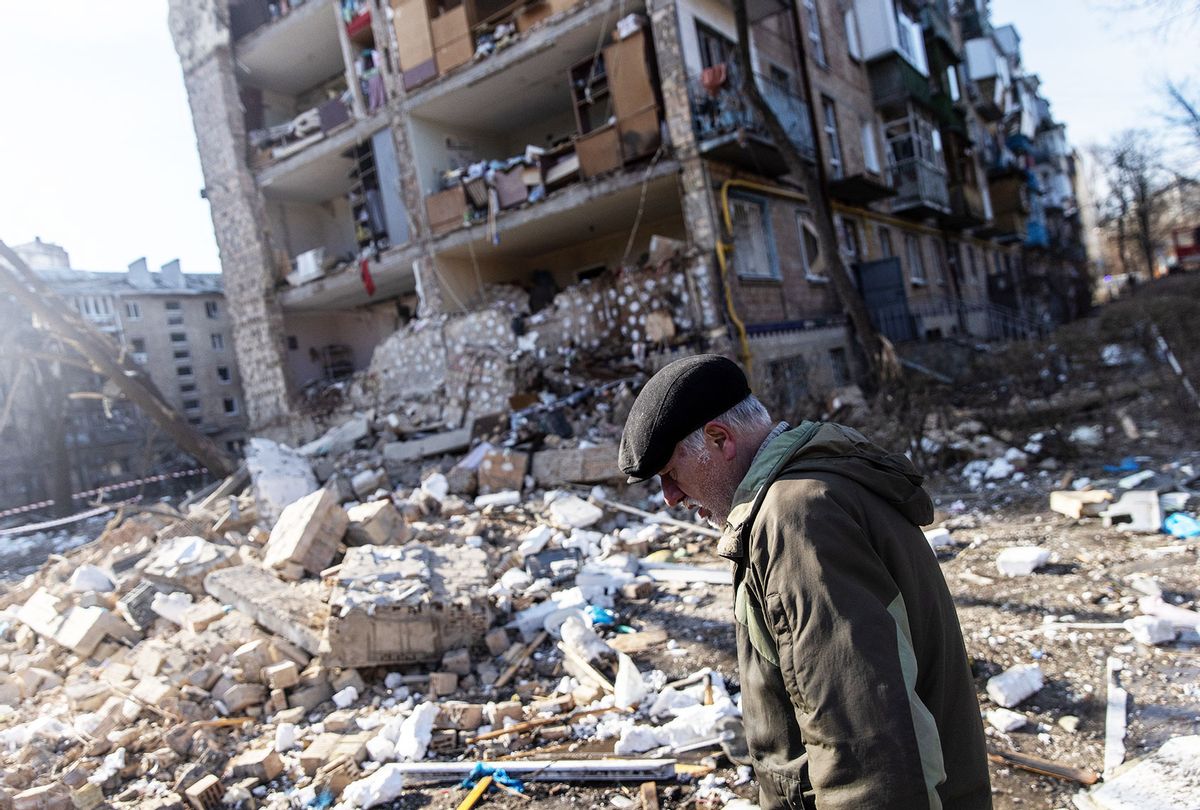 The hardest thing I do as a writer is trying to find words to describe the indescribable. It doesn’t matter what it is — beauty or bliss or sadness or tragedy or dullness or despair or horror or ecstasy or the ordinary — it’s the writer’s job. I remember as a young man having a dream that someday I might come up with one great idea. Just one would do it, but that was my goal. Now I realize what I’ve been doing for more than 50 years is excavating old ideas and finding new ways to express them.

We are witnessing one of man’s very oldest ideas in Ukraine. Call it the will to power or the urge to take what is not yours or the wrath of ignorance and pride, every time war is waged it is the same. War is man’s inhumanity to man on a mass scale.

Perhaps that is why we become so readily inured to images of war. We have seen them all before — the anguished, bleeding faces of the wounded, the bleakly inert limbs of the dead, the angry fire of explosions, the darkness and sameness of destruction — to borrow Hannah Arendt’s term, the sheer banality of it all.

RELATED: Ukraine and the dark lessons of war: What does it mean to “take” a country or a city?

War is brand new when it first happens, yet after only a day it is already old to us because it has been headlined on the front pages of newspapers, featured on the covers of magazines, flickered across our televisions, splashed on the big screen of movies in Technicolor, engraved in the text of great novels and first-person reports from the front. The most extraordinary scene in the 1970 movie “Patton,” the one that I believe gives it staying power, comes when Gen. George S. Patton is on a bluff in North Africa or Sicily seeming to reminisce about having been at that exact spot before during ancient battles. He ends his oration by saying this about war: “I love it. God help me, I do love it so. I love it more than my life.”

I don’t know if Patton ever said the lines from the movie in real life, but I do know that after I took my grandmother, Sara Randolph Truscott, to see “Patton” the week it came out, I asked her what she thought, and she turned to me and answered with a little smile, “Why, it was just like being in the room with Georgie,” calling him by a nickname only his family and close friends used.

Her late husband and my grandfather, Gen. Lucian K. Truscott Jr., knew Patton and served on the same cavalry posts with him between the wars. It’s safe to assume she would have known what the man was like, so that’s probably as good an assessment we’ll ever get of the movie’s essence. In Patton’s rumination on war, he is saying the unsayable out loud. It makes him seem like a monster, but we are all monsters, we humans who love war, or at least tolerate it such that we keep waging it over and over and over again.

It chills the soul to think that he might be right, but here we are again, 52 years after “Patton” was released, bearing witness to yet another war being fought over the same ground, in the same cities, for largely the same reasons as the war against the Nazis that Ukraine (and Russia) fought 81 years ago. It’s tempting to ask why nothing is ever new, but I’m afraid we know the answer all too well.

There is one image of war we haven’t yet seen in the coverage of Russia’s war against Ukraine. We’ve seen people sheltering in subway stations and basements and people traveling by train or by car to get to western Ukraine or Poland to escape the bombing and shelling. But we haven’t seen the people left behind who don’t have the wherewithal or money or even the energy to escape the cities and towns being bombed, and who end up stuck trying to survive in the ruins. I saw an interview with an expert on Ukraine this week who said that 10 percent of the population already lived below the poverty line of about $5 or $6 a day, even before the war began. It won’t take long for as many as 90 percent of Ukrainians to be in the same position, he said.

I am certain that there are already people in Ukraine living in the bombed-out ruins of rural homes and urban apartment buildings with no electricity, heat, source of food or water — just existing on nothing. Because I haven’t traveled to Ukraine to cover this war, and because all wars are essentially the same, I’ll tell you what I saw in Afghanistan in March of 2004 in the ruins of some old apartment complexes and office buildings on the edge of Kabul.

It was like a landscape out of a near-future movie about the world after the Big Bomb, but it was real: Families had fashioned shelters out of the rubble of the buildings, using scrap wood and metal for roofs and more wood scraps and piles of rubble and cheap carpets and blankets for walls, and they were living in the midst of this horrific destruction without electricity or water and only small cooking fires for heat. Here and there, I could see pits that had been dug out of the dirt and sealed with mud walls to make bread ovens, where they could bake flatbread by slapping dough on the curved walls of the pits. But none of the ovens had fires going, because the families didn’t have any flour and water to make dough.

I had stopped at a small bakery next door to the Mustafa Hotel, where I was staying in Kabul, and picked up a bag of sugar cookies that I planned on eating as snacks later in my room. I had the bag stashed in a kilim shoulder bag I was carrying, but almost immediately upon entering the ruins, I was surrounded by a crowd of starving children. Their faces were dirty from having not been washed in weeks, and many of them had open infections oozing pus on their legs and arms. They were pawing at me and chattering in Dari and my translator told me they were asking for food and water, so I took out the bag of cookies and began handing them out. It was like being set upon by a pack of wolves, their fingers were tugging and scratching at my pant legs and arms as I tried to spread the cookies evenly between the children. Within a minute or two, they were all gone and the children disappeared into gaps in the rubble and behind the thin rugs where their mothers huddled in the cold.

With my translator, I tried to talk to a few of the women to get their stories: How they had ended up in these ruins in Kabul, how long they had been there, the usual questions a reporter asks in a war. Their husbands, the fathers of the children, had all been killed in fighting between Afghan factions or by the Taliban or by U.S. soldiers, so there were no men in the ruins. My translator explained that widowed women with children were undesirable and were shunned in their villages, which was why they had traveled from distant areas looking for shelter and work and aid from NGOs in Kabul. They had noplace else to go; that’s why they were living in the ruins among the detritus of war.

I went back to the ruins once more before I left Afghanistan and handed out flatbread and some bottled water this time. The scene was the same. The children clawed at me desperately. It was all I could do not to throw down the bag of bread and the water bottles and run.

When I returned to L.A. a week or so later, there was a sore on my left forefinger that wouldn’t heal. I went to my GP. He examined my finger and took a swab and asked me to wait while he had it tested. A couple of hours later the test came back. It was an MRSA infection. He asked me what I had come in contact with in Afghanistan that might have caused it, and I thought immediately of the children in Kabul with their open sores and cracked lips and desperate eyes. I had touched them repeatedly while handing out cookies and bread in the ruins.

The doctor gave me a big shot of antibiotics and put me on the only pill known to knock down MRSA infections. The sore got worse for a couple of days and then began to heal. The doctor told me that if I had waited to get it treated for even a day longer, I would probably have lost my finger. If I had neglected the infection longer, I could have lost my hand.

This is one of the very old ideas about war I have excavated: After the bombs have fallen and the artillery shells have exploded and the missiles have found their targets, what is left are women and children with no money, no food, no water, living in bombed-out ruins with no place else to go. That was what happened in Afghanistan, and it happened in Sicily and Vietnam and Korea and Iraq and Aleppo and Rome and Jerusalem and Cairo and Mogadishu, and now it is happening in Ukraine. History becomes present becomes future and nothing changes. The thing that is forever is war.

Read more on the Ukraine war and its consequences:

Sanders calls out Manchin: He only “represents the very wealthiest people in this country”

How the Biden administration caved to Republicans on fighting election disinformation