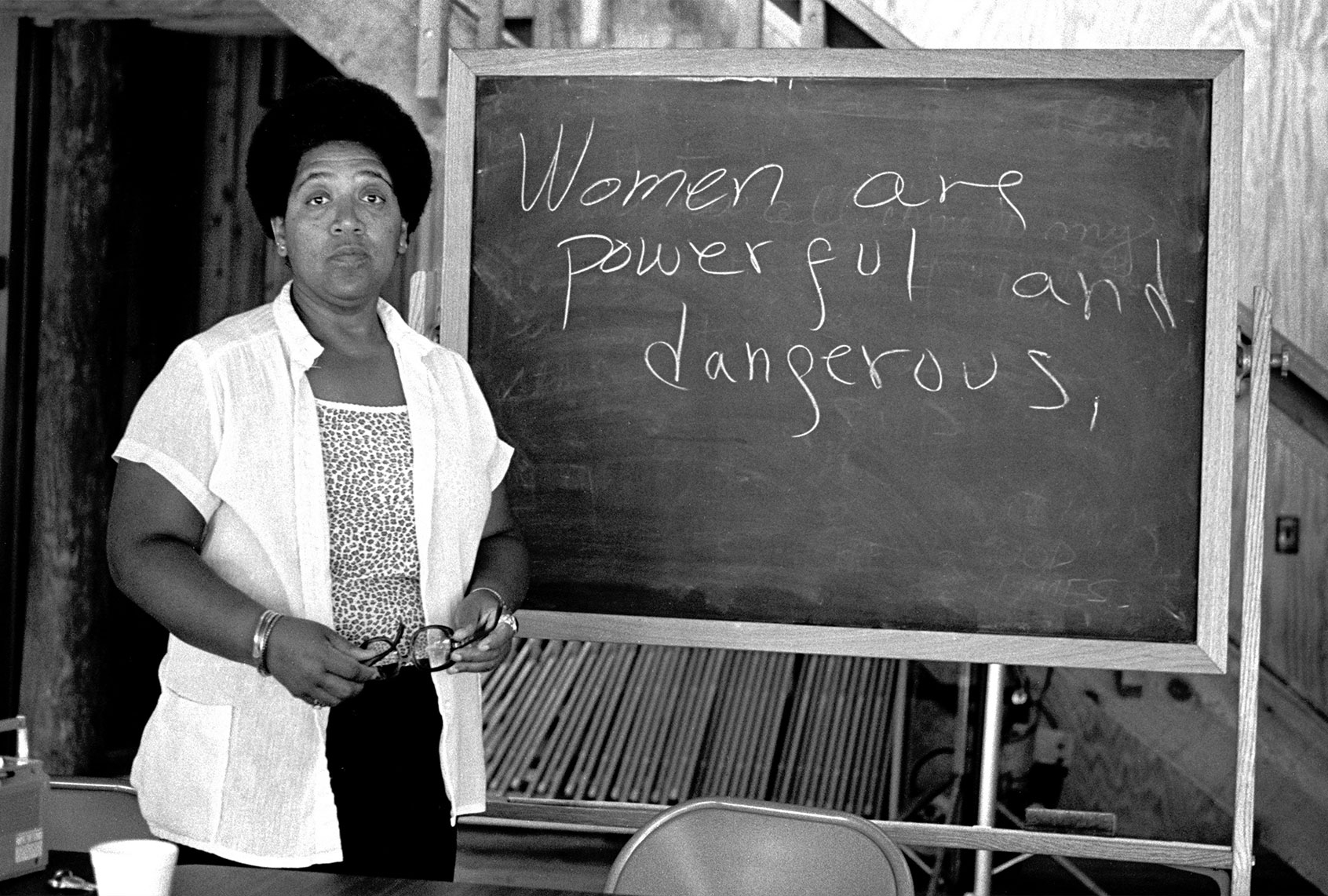 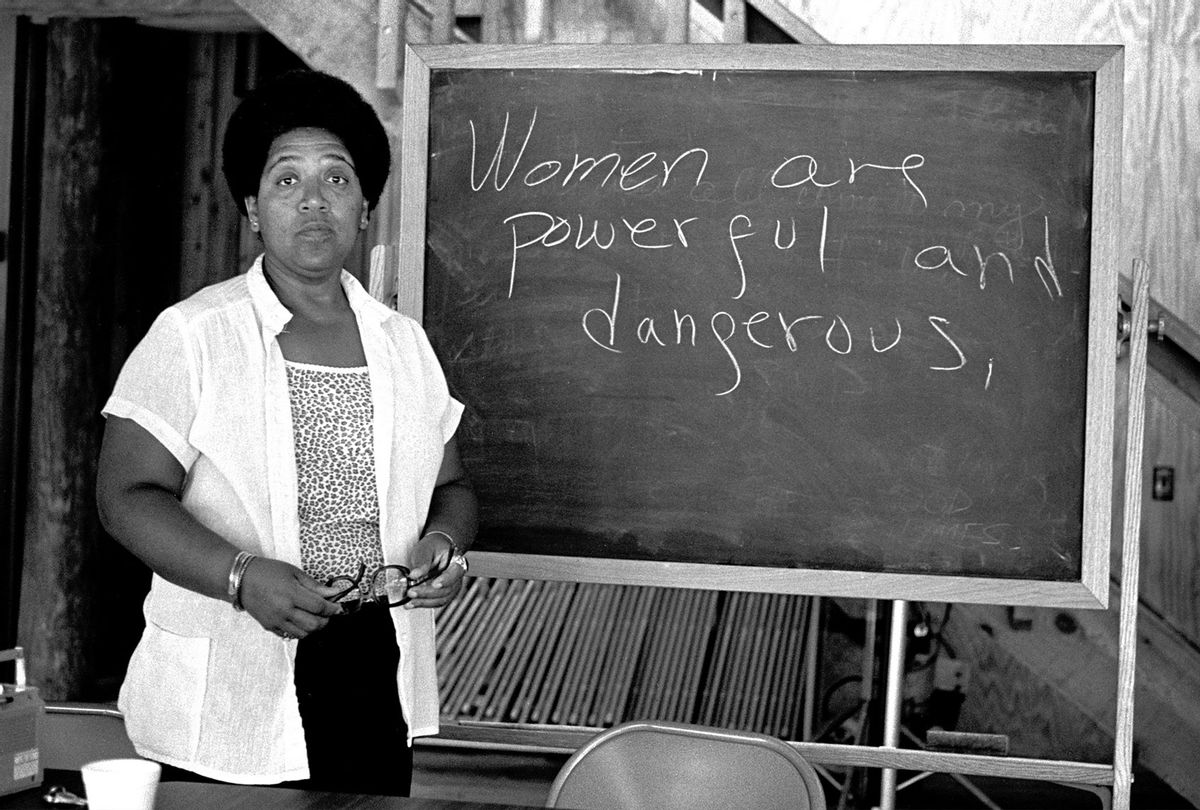 Through poems like “Coal,” essays like “The Master’s Tools Will Never Dismantle the Master’s House,” and memoirs like “Zami: A New Spelling of My Name,” Audre Lorde became one of the mid-20th century’s most radically honest voices and important activists. Here are some fascinating facts about the woman behind the work.

Audrey Geraldine Lorde was born in Harlem on February 18, 1934, to parents who had emigrated from Grenada a decade earlier. Her mother, Linda Belmar Lorde, had Grenadian and Portuguese ancestry; and her father, Frederick Byron Lorde, had been born in Barbados. She had two older sisters, Phyllis and Helen.

2. She dropped the y from Audrey

When Lorde learned to write her name at 4 years old, she had a tendency to forget the Y in Audrey, in part because she “did not like the tail of the Y hanging down below the line,” as she wrote in “Zami: A New Spelling of My Name.” “I used to love the evenness of AUDRELORDE,” she explained. She included the Y to abide by her mother, but eventually dropped it when she got older.

It wasn’t the only time Lorde chose a name for herself. The title “Zami,” “a Carriacou name for women who work together as friends and lovers,” paid homage to the “bridge and field of women” that made up Lorde’s life. Carriacou is a small Grenadine island where her mother was born. Shortly before Lorde’s death in 1992, she adopted another moniker in an African naming ceremony: Gambda Adisa, for “Warrior: She Who Makes Her Meaning Known.”

3. Lorde once spoke in poetry — literally

Before Lorde even started writing poetry, she was already using it to express herself. She memorized poems as a child, and when asked a question, she’d often respond with one of them. “Somewhere in that poem would be a line or a feeling I would be sharing. In other words, I literally communicated through poetry,” she said in a conversation with Claudia Tate that was published in “Black Women Writers at Work.” “And when I couldn’t find the poems to express the things I was feeling, that’s when I started writing poetry.”

While attending New York’s Hunter High School, Lorde got involved with the school’s literary magazine, “Argus.” When a poem of hers, “Spring,” was rejected — the editor found its style too “sensualist,” à la Romantic poetry — she decided to send it to Seventeen magazine instead. It was published in the April 1951 issue. Lorde was 17 years old at the time, and she wrote in her journal that the event was the most fame she ever expected to achieve.

5. Lorde was a librarian

Lorde’s passion for reading began at the New York Public Library’s 135th Street Branch —since relocated and renamed the Countee Cullen Branch — where children’s librarian Augusta Baker read her stories and then taught her how to read, with the help of Lorde’s mother.

Lorde eventually became a librarian herself, earning a master’s degree in library science from Columbia University in 1961. She was the young adult librarian at New York’s Mount Vernon Library throughout the early 1960s; and she became the head librarian at Manhattan’s Town School later that decade.

“I became a librarian because I really believed I would gain tools for ordering and analyzing information,” Lorde told Adrienne Rich in 1979. “I couldn’t know everything in the world, but I thought I would gain tools for learning it.” She came to realize that those research skills were only one part of the learning process: “I can document the road to Abomey for you, and true, you might not get there without that information. … But once you get there, only you know why, what you came for, as you search for it and perhaps find it.”

After separating from her husband, Edwin Rollins, Lorde moved with their two children and her new partner, Frances Clayton, to 207 St. Paul’s Avenue on Staten Island. They lived there from 1972 until 1987. During that time, Lorde published some of her most renowned works, including her poetry collections “From a Land Where Other People Live” and “The Black Unicorn,” and her “biomythography” “Zami: A New Spelling of my Name.”

In June 2019 — on the 50th anniversary of the Stonewall Riots — the New York City Landmarks Preservation Commission recognized Lorde’s contributions to the LGBTQ+ community by naming the house an official historic landmark.

Lorde didn’t balk at labels. She was known for introducing herself with a string of her own: “Black, lesbian, mother, warrior, poet.” To Lorde, pretending our differences didn’t exist — or considering them “causes for separation and suspicion” — was preventing us from moving forward into a society that welcomed diverse identities without hierarchy.

“Those of us who stand outside the circle of this society’s definition of acceptable women; those of us who have been forged in the crucibles of difference — those of us who are poor, who are lesbians, who are Black, who are older — know that survival is … learning how to take our differences and make them strengths,” she wrote in “The Master’s Tools Will Never Dismantle the Master’s House.”

8. She co-founded a publishing company for women of color

In October 1980, Lorde mentioned on the phone to fellow activist and author Barbara Smith that they “really need to do something about publishing.” That same month, Smith organized a meeting with Lorde and other women who might be interested in starting a publishing company specifically for women writers of color. By late 1981, they’d officially established Kitchen Table: Women of Color Press.

“We chose our name because the kitchen is the center of the home, the place where women in particular work and communicate with each other,” Smith wrote in 1989. The kitchen table also symbolized the grassroots nature of the press.

Between 1981 and 1989, Kitchen Table released eight books, including the second edition of “This Bridge Called My Back: Writings by Radical Women of Color,” edited by Cherríe Moraga and Gloria Anzaldúa, and “Home Girls: A Black Feminist Anthology,” edited by Smith. The press also published five pamphlets, including Angela Davis’s “Violence Against Women and the Ongoing Challenge to Racism,” and distributed more than 100 works from other indie publishers.

Though Kitchen Table stopped publishing new works soon after Lorde passed away in 1992, it paved the way for future generations of publishers. Alexis Pauline Gumbs credits Kitchen Table as an inspiration for BrokenBeautiful Press, the digital distribution initiative she founded in 2002.

9. She helped launch the Afro-German movement

In 1984, at the invitation of German feminist Dagmar Schultz, Lorde taught a poetry course on Black American women poets at West Berlin’s Free University. While there, she forged friendships with May Ayim, Ika Hügel-Marshall, Helga Emde, and other Black German feminists that would last until her death. With Lorde’s influence, the group published “Farbe Bekennen” (known in English as “Showing Our Colors: Afro-German Women Speak Out”), a trailblazing compilation of writings that shed light on what it meant to be a Black German woman — a historically overlooked and underrepresented demographic. Lorde is also often credited with helping coin the term “Afro-German,” which Black German communities embraced as an inclusive form of self-definition and also as a way to connect them to the global African diaspora.

10. Lorde encouraged the “Educate yourself” mindset

Lorde criticized privileged people’s habit of burdening the oppressed with the “responsibility . . .  to teach the oppressors their mistakes,” which she considered “a constant drain of energy.”

11. Lorde was a breast cancer survivor

In 1978, Lorde was diagnosed with breast cancer and underwent a mastectomy of her right breast. She declined reconstructive surgery, and for the rest of her life refused to conceal that she was missing one breast. In 1980, she published “The Cancer Journals,” a collection of contemporaneous diary entries and other writing that detailed her experience with the disease. She decided to share such a deeply personal story partly out of a sense of duty to break the silence surrounding breast cancer.

As she explained in the introduction, the book was both for herself and “for other women of all ages, colors, and sexual identities who recognize that imposed silence about any area of our lives is a tool for separation and powerlessness.” She wrote that “I do not wish my anger and pain and fear about cancer to fossilize into yet another silence, nor to rob me of whatever strength can lie at the core of this experience, openly acknowledged and examined.”

Lorde’s cancer never fully disappeared, and in 1985, she learned it had metastasized to her liver. Not long after, she and her partner, Gloria Joseph — another leading feminist author and activist — moved to St. Croix, the Caribbean island where Joseph was from. Lorde lived with liver cancer for the next several years, and died from the disease on November 17, 1992, at age 58.

Daisy Jones and the Six: Everything We Know About the Prime Video Series

The ultimate step-by-step guide to a clean stove