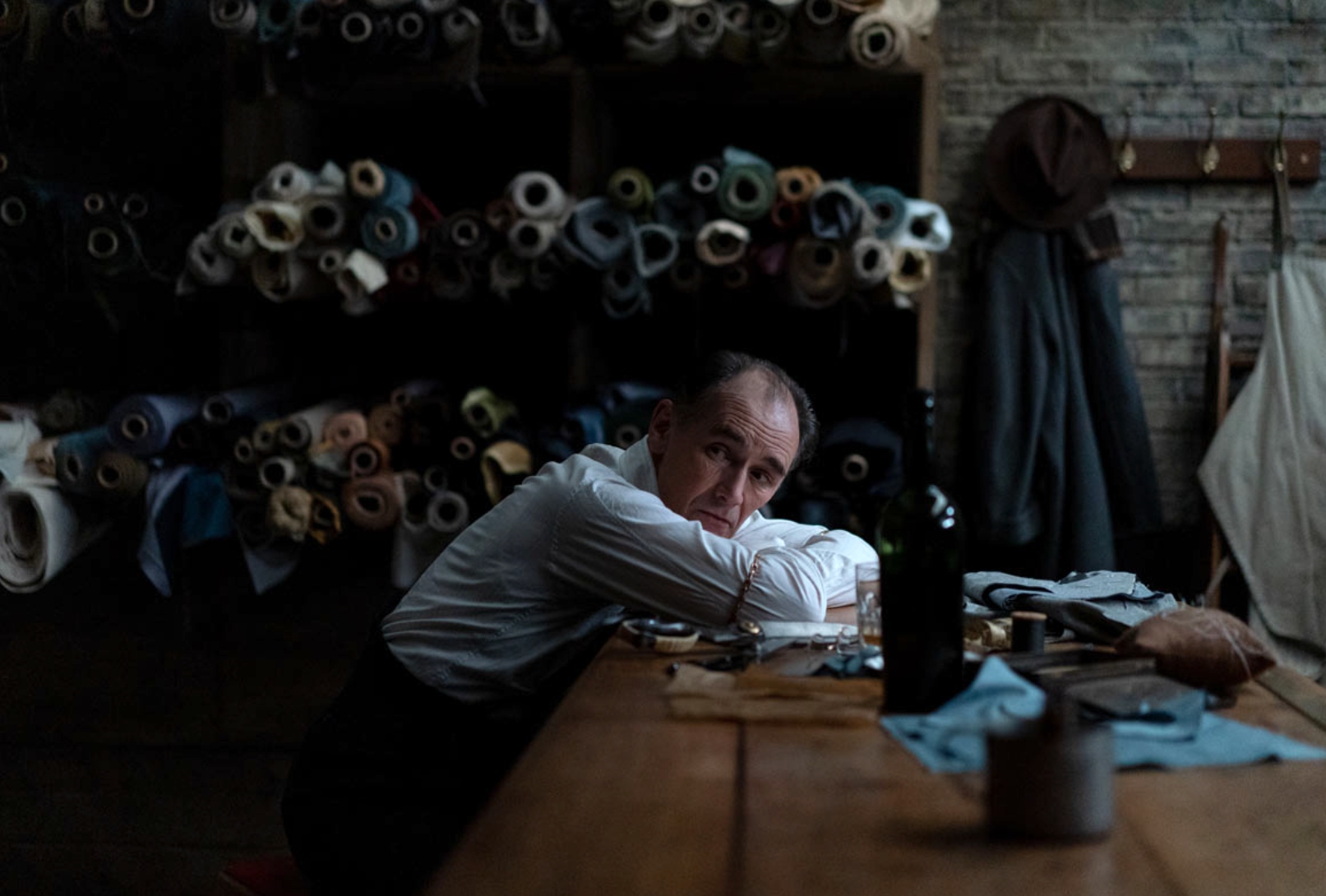 “The Outfit” is a cheap, talky and stagy chamber drama that thinks it is clever. But the smartest thing about director and cowriter Graham Moore’s film is casting Mark Rylance as Leonard (aka “English”) the main character, a cutter — not a tailor — who makes bespoke suits. (To be fair, the suits are quite sharp.)

Playing a discreet gentleman who knows exactly what to say — or not to say — and when, Rylance gives a performance that is reminiscent of Michael Caine in his prime. Leonard is one of those screen characters who is easily underestimated, which is why viewers keep their eyes on him. And Rylance is able to suggest so much of what Leonard is thinking with just his eyes or his mouth. But as good as the Oscar-winning actor is here, it is disappointing he is not in a better film.

Set in 1956 Chicago, and unfolding entirely within the confines of Leonard’s shop, this crime film opens with Leonard waxing poetically in voiceover about the steps it requires to make a suit as well as sizing up who the man is beneath the clothes. It is clear that Leonard knows his trade, but Moore, who won an Oscar for his screenplay for “The Imitation Game,” fails to provide anything more than superficial characters.

Leonard has fatherly affection for his receptionist, Mable (Zoey Deutch), whose own father died years ago. She appreciates Leonard but maintains that she can look after herself. Mable dreams of visiting Europe and collects snow globes of all the sites she hopes to visit. Mable is also romantically involved with Richie (Dylan O’Brien), the brash and arrogant son of local gangster Roy Boyle (Simon Russell Beale). Leonard isn’t pleased with their relationship, and one night he overhears the lovers talking (about him even). But being the discreet gentleman he is, he pretends to be asleep when they discover him. 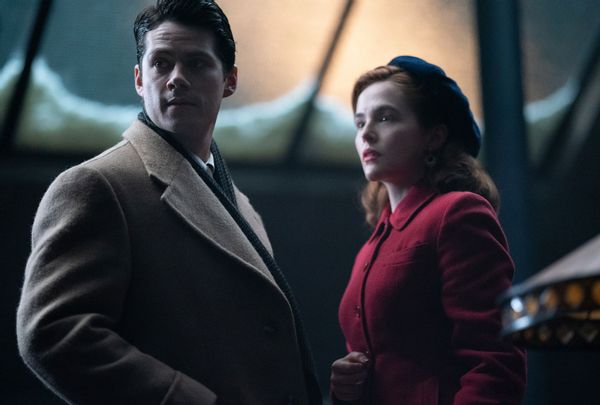 All that, which is not all that much, happens in the film’s first 20 minutes. But then Richie shows up bleeding; he took a “marble” (the film’s oft-used noir slang for bullet). His edgy associate, Francis (Johnny Flynn), points a gun at Leonard, and asks the cutter, an expert with a needle, to sew Richie up. Francis also has a briefcase containing an incriminating tape that should not fall into the wrong hands. There is a war escalating between the Boyles and their rivals, the LaFontaines, and a rat who may be selling info to the FBI.

“The Outfit” put all these characters and plotlines into place but then does very little with them. When one of their own dies, the other characters cover it up. And when Roy Boyle and his henchman (Alan Mehdizadeh) — both straight out of central casting — show up demanding (and enunciating every word), to know where that person is, lies get told and consequences occur.

But Moore zaps these scenes of all their tension because the audience knows the truth. As much fun as it can be to see how Leonard plays the ends against the middle — because he is the smartest man in the room — seeing the other characters betray each other does not generate much interest. Moreover, as Leonard manipulates the pawns on this chessboard, the film’s few “surprises” are hardly startling.

The main problem with “The Outfit” is that it is difficult to care about any of the characters, except Leonard. Richie is obnoxious, and the badly miscast Dylan O’Brien gives a broad, scenery-chewing performance. Johnny Flynn catches some sparks as Francis, who sees an opportunity to gain some leverage in his situation, but he is not necessarily someone to root for in part because his character is underdeveloped. As Roy, Simon Russell Beale is not menacing enough; his threats feel empty, which makes it hard to take his storyline seriously. Moore just keeps putting the emphasis on the wrong syllable.

The one thing the film does get right is an appearance by Violet LaFontaine (Nikki Amuka-Bird), who has a great speech that explains the rivalry between her and the Boyles. Violet expresses the racism and xenophobia that was inherent in the 1950s, which gives the story some context. But Moore buries this lede. Knowing the beef earlier may have created some buy-in with the characters.

This leaves Mable, who is the lynchpin in the film, because she cares for Leonard and for Richie and, as such, is at the mercy of all the characters, each of whom needs her loyalty. But Deutch does not make a strong impression, despite being the most fleshed-out character. Actually, she should be ambiguous, but Deutch’s performance just makes her comes off as blank.

As the plot points lock into place in the last reel there never seems as though much is at stake. Yes, Leonard’s much-discussed shears are going to be used on someone, but it is easy to guess who because Moore telegraphs the major plot twists.

Rylance’s fine underplaying cannot save “The Outfit” from being second-rate.

“The Outfit” is in theaters beginning Friday, March 18. Watch a trailer for it below, via YouTube.

More stories to check out:

Mask Use on Public Transportation

Why the Queen’s Crown, Orb, and Sceptre Were on Her Coffin—and What Happens to Them Next