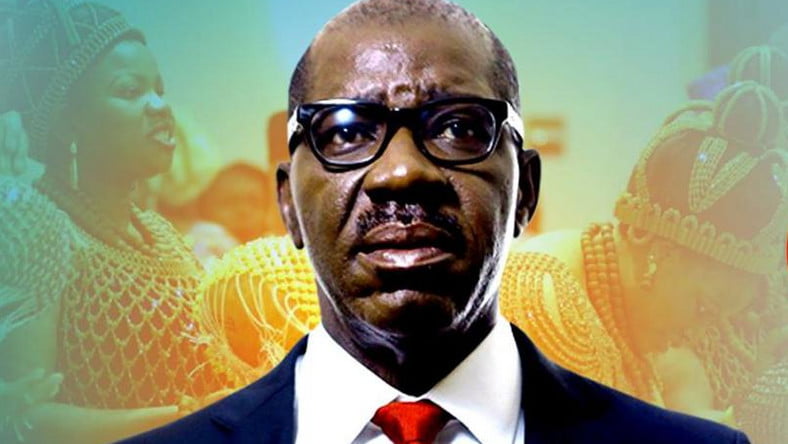 Every sadistic narcissist has his plan in place before embarking on their hysterical wars, just like Obaseki is seen doing in every gathering he calls for.

The narcissist is never the problem, the people are. They blame others for their own failures, never themselves. They want to make the public look at you as the aggressor while they take the place of the victims when the reverse is the case.

Obaseki cannot continue to fool the people with his known antics. Chief Dan Orbih has national PDP assignments to attend to, and won’t be drawn into the unnecessary diatribe of Obaseki who has found it a duty to continue attacking those who helped him climb ladders in life. He used the propaganda of hatred and mind games to destroy Oshiomhole because Oshiomhole was responding to his maniacal tirades in public.

Chief Dan Orbih I know is smarter than that. If he wishes to respond to the illegalities of Obaseki, he goes to court for his lawyers to interpret the laws in the PDP constitution, where he is a custodian, to Obaseki. That apart, Chief Dan Orbih is too well brought up to be exchanging words with Obaseki. He has political friends like Governors Makinde, Okowa, Udom, Diri…who will not be happy that he is fighting in the mud with Obaseki who has since chosen paths of dishonour and dirt.

These governors and other notable Nigerians are his friends, they are the most respected members of our socio-political society and they will be utterly disappointed if he responds in a manner that is not expected of him. He is a member of the National Working Committee of PDP, these members are role models, unlike Obaseki, in the party and to several youths, they can’t be seen to be fighting dirty.

The simple fact that you were fooled and conned doesn’t make you an idiot. What makes you an idiot is when you blatantly refuse to look at the truth and make the conscious decision to believe the lies. Yes, Obaseki used these lies to defeat Comrade Oshiomhole and APC because the Comrade thought he was going to fight dirty with him – someone who was already down and need not fear.

It shouldn’t be allowed to work this time around. Obaseki is a known narcissist who is power-drunk but does not want to take responsibility for his administrative failures. He wishes to be seen to be special but will refuse to be criticized. He wishes to achieve leadership of the party without earning it. Everything about Obaseki stands as a contradiction.

Let me put this as straightforward as I can: What Obaseki wants is to try as much as possible to turn the fight between him and Chief Dan Orbih even when the fight is between him and the Party’s Constitution and his attendant nature of not being just and fair.

This struggle has nothing to do with Chief Dan Orbih. He is not PDP, he is not the constitution, he is not a member of the exco Obaseki wishes to dissolve or illegally harmonize. Chief Dan Orbih is not looking for appointments for himself nor for his children like other sold-out PDP stakeholders who sees the truth but embark on the journey towards the lies told.

Orbih, being very cautious of Obaseki’s antics will not fall for them. He won’t fall for one single one. He will continue to be silent about these issues with his infectious smile, he will rather allow Obaseki to keep fighting himself by attending to him with graveyard silence.

Chief Dan Orbih knows it was these same tactics Obaseki used against Oshiomhole; he called every politician in APC a thief, blackmailing them against the masses that they wanted him to share the state’s money. They all reacted, including Oshiomhole. Chief Dan Orbih won’t fall for those cheap bygone dictatorial tendencies and fickle antics. He would allow Obaseki to continue to fight himself since he is a warrior.

Even the blind can actually see that Obaseki has been trying to draw Chief Dan Orbih to the battlefield just as Putin wants to draw the world into a nuclear war. Obaseki knows what he is doing. He thinks he is very smart. He wants all focus to be directed towards Chief Dan Orbih because it is easier to hide his deficiencies under the leadership of Chief Dan Orbih.

But as an astute politician who was trained under the legendary Chief Tony Anenih, the Esama of Uromi won’t allow himself to be blackmailed by the witless Obaseki. He is looking for sympathy from the people that is why he is always attacking Orbih in public. He doesn’t care who the scapegoat is, what he does is use you, dump you or destroy you. He knows what he is doing.

But one thing is sure, Chief Dan Orbih is succeeding in being more sensible than whatever Obaseki can ever be. He is expected to be laughing if Orbih reacts, but he does not react, so he feels sad and falls deeper into self-inflicted depression.

Articles published in our Opinion section are strictly the opinion of the writers and do not represent the views of Naija News or its editorial stand.