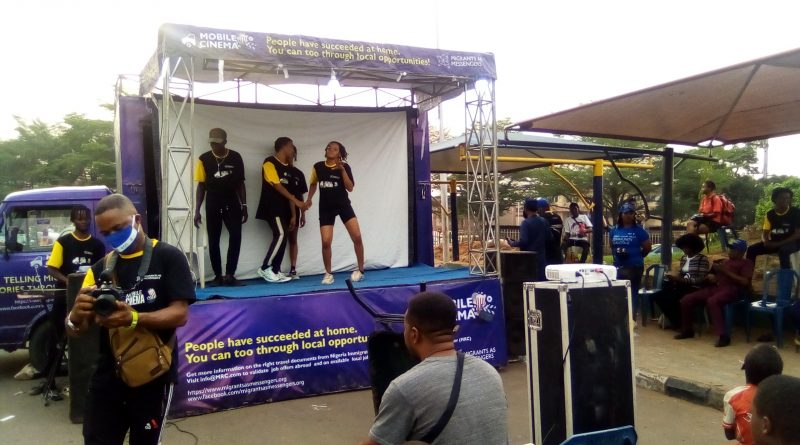 The International Organization for Migration (IOM), yesterday, said, it has over the last two weeks sensitized over 18,000 persons on the ills of irregular migration and human trafficking in Edo and Lagos states through Mobile Cinema programme.

That United Nations agency which provides services and advice concerning migration to governments and migrants, including Internally Displaced Persons, refugees, and migrant workers said the sensitization was carried out in 20 communities in the two states.

Cyprine Cheptepkeny, Edo State, Awareness Raising Officer of the agency made the disclosure in Benin City at the grand finale of Migrants As Messengers: Telling Migration Stories through Film.

She listed some of the communities visited in the two states to include Alimosho and Ikorodu in Lagos state and Uromi, Ekpoma, Irrua, Ovia North- East and Oredo local government areas.

While noting that Edo state  accounts for 35 percent of the total number of persons that travelled irregularly including trafficking in persons in the country, said that
the sensitization through mobile cinema becomes necessary to provide a true life account of returnees’ experience in the desert and Mediterranean Seas.

The Edo State, Awareness Raising Officer, who described irregularly migration and human trafficking as anti- economic and human development, advised the potential migrants to acquire the relevant and necessary documents for travelling legally.

“Sometimes, we carried out activities like the one we are showcasing today so that the people will understand the danger associated  with irregular migration and trafficking in persons, and we are hoping that the people here will take the message back homes to their loved ones to educate them as well.

“The contents we are showing are testimonies of returned migrants that have traveled and have come back home.

“It will interest you to know that some Nigerians are part of those who are involved in the activities of irregular migration and human trafficking as testified by some of these returned migrants in the documentaries we are watching today. We are hoping that the message will get out there, so that the people will understand the need  to travel in the right way.

“We are not telling them not to travel but we are saying travel the right way. Get all your documentation, get all the necessary things you need to get and ensure that you follow the necessary protocols because every destination country have certain protocols when it comes to travelling and migration”, she said.

The Mobile Cinema showcased to the people are ” Beyond Borders: a documentary of a testimony of a returnee from Uromi in Esan Nortjh-East local government and “Desert Crossing:  A short film. Showcasing the life experience of migrants in the desert and the Mediterranean Sea.

Caption: The IOM team performing on stage during the sensitisation campaign on irregular migration in Benin City yesterday.

“Closer than most people realize”: Alarm over GOP plot to “drastically change the Constitution”