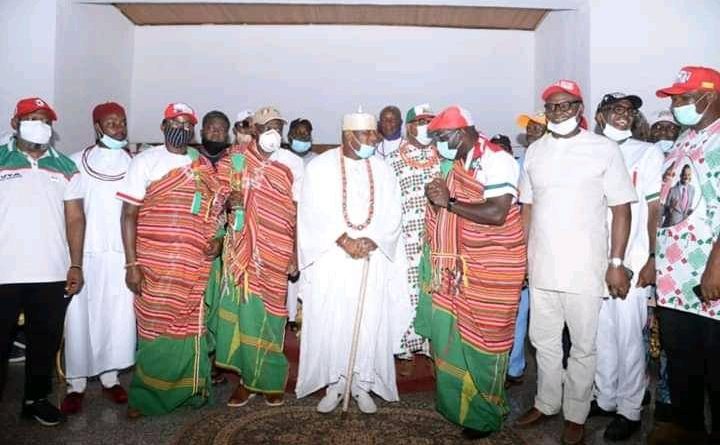 The Ojuromi of Uromi, His Royal Highness (HRH), Anselm Aidenojie II, yesterday, received the candidate of the Peoples Democratic Party (PDP) and Governor of Edo State, Mr. Godwin Obaseki, and his deputy, Comrade Philip Shaibu, in his palace in Uromi, Esan North East Local Government Area of the state, and offered royal blessings for their reelection bid.
The traditional ruler, who listed the various developmental projects executed by the Obaseki-led administration in Uromi, assured the governor that Uromi people will show their appreciation with their votes on September 19.
The monarch hailed the governor for his reinstallation to the throne after he (the Ojuromi of Uromi) was suspended by the former Governor, Adams Oshiomhole.
The traditional ruler also lauded Obaseki for the love shown to Esan people through various political appointments, especially for the role played to ensure their son, Frank Okiye, was elected Speaker of Edo House of Assembly (EDHA).
“You have tarred 10 roads in Uromi and brought the College of Agriculture, water and other developmental projects to our land. The only way to thank you for the development of Uromi is through the effective use of our Permanent Voter Cards (PVCs). I believe God will always win in your case”, the Ojuromi of Uromi said.
On his part, Obaseki thanked the Esan people for their support and love for his administration, adding, “We can’t underplay the role of Uromi in the political development of the state and Nigeria at large”.
Reaffirming his administration’s commitment to bring more developmental projects to the area, the governor said: “I will leave with you a 30-year development plan that successive administrations will follow, to develop Uromi.
“I am happy we have been able to restore water supply to the area and we will sustain it. The education of our children is special to us and we appeal that you prevail on your people to take education seriously. Before the end of the year, we will ensure we upgrade Ahojie Stadium. The cassavita factory will be given attention as investment has gone around the area to support farmers.
“Our government is open to all Edo people, not a few who would want to milk Edo dry. We appeal to you to help free Edo State”, he added.
The traditional ruler later decorated the governor, his deputy and Speaker of the Edo State House of Assembly (EDHA), Frank Okiye with the Igbulu attire (popular among Esan people), to express his appreciation for the administration’s developmental projects in the area and love for Esan people.
The Igbulu is a special traditional attire in Esan land, which connotes royal blessings and prayers. 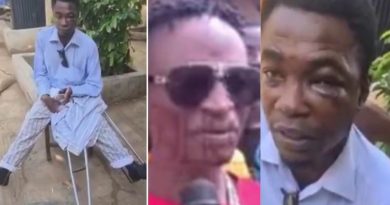