Edo State Government has said that it will meter the consumption of water from the Uromi-Ugboha Water Reticulation Project in the Esan North-East Local Government Area of the state.

Obaseki explained that the decision was aimed at ensuring the efficient management of the water plant, regulating usage and checking leakages as the residents pay for what they consume.

He also said that regulating water usage would sustain the project, which, according to him, had the capacity to produce nine million litres of water per day.

The governor spoke during the commissioning of the facility, which is expected to provide potable water for over 500,000 residents in Edo Central senatorial district, according to a statement on Thursday.

Obaseki noted that the water plant was completed by the Federal Government in 2018 and handed it over to the Edo State government.

He, therefore, urged the contractors handling the project to ensure that a greater percentage of the workforce was drawn from the host community.

“The scheme was designed to bring water to the homes of everybody in Esan land. To ensure sustainability of the water project, it will be paid for.

“We will give you meters and you will pay a token to ensure you continue to have water in your houses,” the governor said.

On his part, the Technical Assistant Team Lead, Niger Delta Support Programme 3, Albert Achten, stated that the project was an extension of the European Union/NDSP 3 which would be beneficial to all stakeholders.

Acheten added, “This is a remarkable triple-win project – a win for the Federal Government of Nigeria, a win for the EU, which seeks improved water service delivery, and a win for Edo State, as it will serve a significant number of people.”

The Minister of Budget and National Planning, Senator Udo Udoma, commended Obaseki for embarking on the reform of the state water and sanitation sectors.

Udoma, who was represented by a director in the ministry, Mrs. Elizabeth Egharevba, said the Uromi reticulation project would be completed in six months’ time.

The Odionwere of Idumu-Eganlan quarters in Uromi, Pa Michael Igbirenmonlen, appealed to the governor to assist the community with link roads and a perimeter fence around the school close to the project. 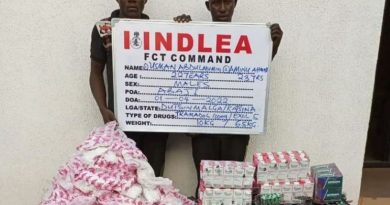 NDLEA seizes N5bn worth of tramadol in 3 states – Chronicle.ng