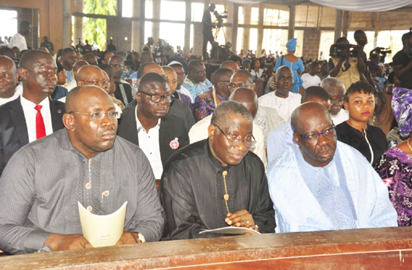 The mass was part of the state burial organised for Chief Anenih, the Iyasele of Esan land, in recognition of his contributions to the development of Edo State and Nigeria.

In his homily, the Bishop of the Diocese of Uromi, Most Rev. Dr Donatus Ogun, said human life was a journey and should be lived in service to humanity and with consciousness of the existence of the supreme being.

The Bishop said late Anenih was an exceptionally generous person, who believed in giving opportunities to others to achieve their dreams and was a man of integrity, who stood and lived by his words, a virtue which made him to excel in his political career.

“He believed that every situation could be solved and he helped to give solution to every problem brought to him,” the Bishop said.

In his votes of thanks, the first son of the deceased, Anthony Anenih Jnr., described his late father as a national leader, a statesman and a caring father to many.
https://www.vanguardngr.com/2018/12/tribute-tony-anenih-the-end-of-an-era/

“He was a beloved pillar in our community; from Uromi to Benin and through out Edo. He was our protector, umbrella and educator.

He said his father believed in caring for the elderly, which made him set up a Geriatric Centre at the University College Hospital, Ibadan.

Other dignitaries at the event include National Chairman of the All Progressives Congress (APC), Comrade Adams Oshiomhole and Alhaji Aliko Dangote, among others.
https://www.vanguardngr.com/2018/11/dont-vote-apga-again-uwazuruike-tells-massob-bim/

“Shocked and horrified”: Alarm as Netanyahu set to form Israel’s most right-wing government ever

NY AG rejects Trump’s settlement offer — plans to sue him and at least one of his children: report