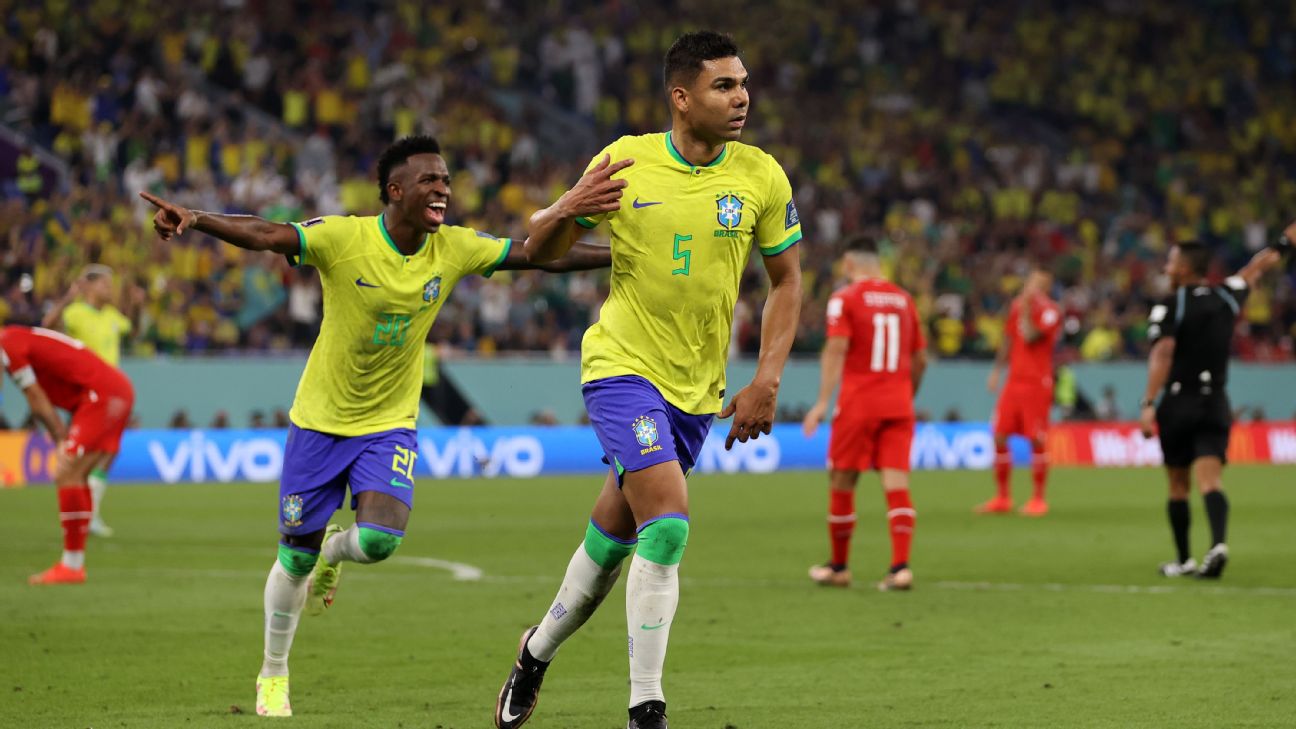 DOHA, Qatar — Casemiro‘s 83rd minute winner was enough to book Brazil‘s spot in the knockout stages of the 2022 World Cup thanks to a 1-0 win over Switzerland at the Stadium 974 on Monday. But for so much of the match, Brazil looked like they were missing the creativity offered by their absent star man Neymar as they continually tried to break down Switzerland’s resolute defence only to come away empty handed. The first half was nervy and quiet, one of the rare moments which roused the crowd was the short power outage in the 43rd minute.

Vinicius Junior thought he had opened the scoring in the 63rd minute, only to have VAR intervene and rule the effort out due to Richarlison‘s offside position earlier in the move. Eventually Casemiro broke the deadlock late on to ensure Brazil are through to the knockouts, while Switzerland can still make the last 16 as they face Serbia in their final group stage match.

There’s been a lot of talk at this World Cup about some pool stage matches becoming games of chess: both teams waiting for an opening, prodding away, but eventually it takes one bold move to bring a game alive. There are the catalysts here in Qatar who can do that, but Brazil are missing their chief creative force. Neymar has provided that spark for Brazil in the past, but with their star forward injured, they lacked the ability for so much of the match to prise open the well-organised Swiss defence.

The Selecao looked void of inspiration in the first half — a 45 minutes which resembled the opening half of their first match against Serbia — but the introduction of Rodrygo at the break gave them some spark to bring the game to life. But still they found it almightily hard to break down the Switzerland back four — with Granit Xhaka and Robin Freuler also doing a brilliant job to play their part in a midfield tussle.

They tried going wide to Vinicius and Raphinha — but found those alleys largely blocked — and rarely profited through the middle. Prior to Casemiro’s 83rd minute winner, they only mustered three decent chances. The first was Vinicius tame shot at Yann Sommer in the first half, as he was unable to convert unmarked from 10 yards out. Then came Richarlison in the second half failing to get his toe on the end of a Vinicius cross, while it was the Real Madrid man to be frustrated in the 63rd minute as he thought he’d opened the scoring, only to have the effort chalked off due to Richarlison’s offside position earlier in the move.

Casemiro eventually broke the deadlock, and the game became more frantic as Switzerland chased an equaliser but without Neymar, Brazil looked blunt in attack for so much of the game and needed the veteran to come up with the goods.

Casemiro said in the build up to the match that he felt sorry for the opposition, such is the strength in depth that Brazil have at their disposal. On the face of it, you could see where he’s coming from, especially as Brazil could bring on Gabriel Jesus, Bruno Guimaraes, Antony and Rodrygo — that’s nearly £200m worth of talent right there.

But it was the old boy himself who broke the deadlock as it was his 83rd-minute deflected strike which gave Brazil the lead. It was a wonderfully taken strike, but it was partly down to the patient attack with Vinicius eventually stretching Switzerland’s defence, Rodrygo flicking a delightful ball to Casemiro and the defensive midfielder finishing it off. At this stage Brazil were effectively playing a 2-4-4 formation in attack, with their fullbacks part of the midfield, and Thiago Silva and Marquinhos anchoring it at the back.

But bar Rodrygo, the others off the bench failed to really change the flow of the match. On the face of this, Rodrygo needs to start against Cameroon as he provided more impetus in attack than Lucas Paqueta did in the first-half while the rest of the bench failed to make a real impact. It needed the dependable mainstays to see them home with Casemiro again proving why he is indispensable.

3. Switzerland still have a chance to go through

Despite the result, Switzerland are in with a wonderful shot of making the knockout stages of this World Cup. With Cameroon defeating Serbia earlier in the day — Switzerland and Cameroon head into the final round of fixtures tied on three points each. That Switzerland-Serbia match promises to be a heated affair but judging by Switzerland’s first two matches in this World Cup, they’ll head into that as favourites.

They were well-organised against Brazil and frustrated Tite’s side for much of the match. They just needed that little bit more ruthlessness in front of goal, but they hustled Alisson — causing the usually immaculate goalkeeper into two botched errors as he tried to play out from the back — and did cause Brazil the odd headache. Xhaka and Co. stuck to their system and were unlucky not to come away from this with a point.

Casemiro was at the heart of this Brazil performance and took the chance when it came his way.

He was meant to be the spark to bring the Neymar-less Brazil attack to life. But instead the West Ham playmaker made way at half time after a frustrating first half.

After a lack of inspiration in the final third for most of the game, the breakthrough for Brazil came through Casemiro.

After the match: What the players and managers said

Switzerland coach Murat Yakin on the defeat: “Well the gameplan for a long time seemed to be working. We had a lot of good running and we believe now, that looking at the result, it’s a sad outcome for us. We let it slip through our fingers. In offence we lacked courage — so I congratulate Brazil on their win and with a little more luck, we could have done more. We have a lot of good takeaways here and that’s important for the next game.”

– Casemiro is the 85th different player to score for Brazil in the World Cup.

– Casemiro: At 82:15, its the 5th latest regulation game winner by a Brazilian at the FIFA World Cup

Brazil: They face Cameroon on Friday at 10 p.m. local time/2 p.m. ET. Brazil have qualified for the round of 16 and can rest key players.

Switzerland: The Swiss will clash against Serbia on Friday, also at 10 p.m. local time/2 p.m. ET. It’s all to play for going into the final matchday of this group.

Cunning and confident, Lena Oberdorf exemplifies how Germany got here