Obi who literally shut down the ancient city of Benin for greater part of Friday said youths need to take back the country as Nigeria cannot continue the way it is.

Obi along with his wife, the National Party Chairman and some key members of the Labour Party visited the Oba of Benin, Omo N’Oba N’Edo Uku Akpolokpolo, Ewuare II.

He had earlier visited the Otaru of Auchi Kingdom, Alhaji Aliru Momoh, Ikelebe III, in Etsako West Local Government Area of the State.

Also, he visited the Ojuromi of Uromi, Anselm Aidenojie II.

The Labour Party presidential candidate paid courtesy to the televangelist and the senior pastor and general overseer of Omega Fire Ministries International, Johnson Suleman in Auchi.

Governor of Edo State, Godwin Obaseki has also explained why the Samuel Ogbemudia Stadium in Benin City, was not approved for the Labour Party’s rally because the notice arrived too late.

Obaseki during an interview on ChannelsTv on Friday said the notice to use the stadium was received 24 hours to the event.

“The tracks for that stadium are still under warranty,” he said. “The pitch has to be maintained in a certain mold. So it’s not just another facility you can use without preparing.”

Meanwhile, the Peoples Democratic Party (PDP), Obaseki’s party, used the stadium for a rally on October 22.

He said the PDP met the conditions for using the stadium.

“And the only reason why we allowed the PDP rally was because it was also used as an opportunity to commission that facility. Otherwise most other rallies are held in other large grounds around the city.”

Obaseki said he was disappointed with the Labour party.

“I thought they were more serious,” he said.

Many believe the government’s decision to refuse the stadium’s use for the Labour Party was due to Obaseki’s fear of Peter Obi’s rising political profile.

Obi is the presidential candidate of the Labour Party in the 2023 elections.
Obaseki dismissed such an idea, saying, “they can show us virtually but not on the ground,” he laughed. “We are on ground. We’ll see. It’s February 23.” 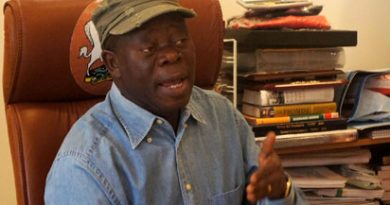