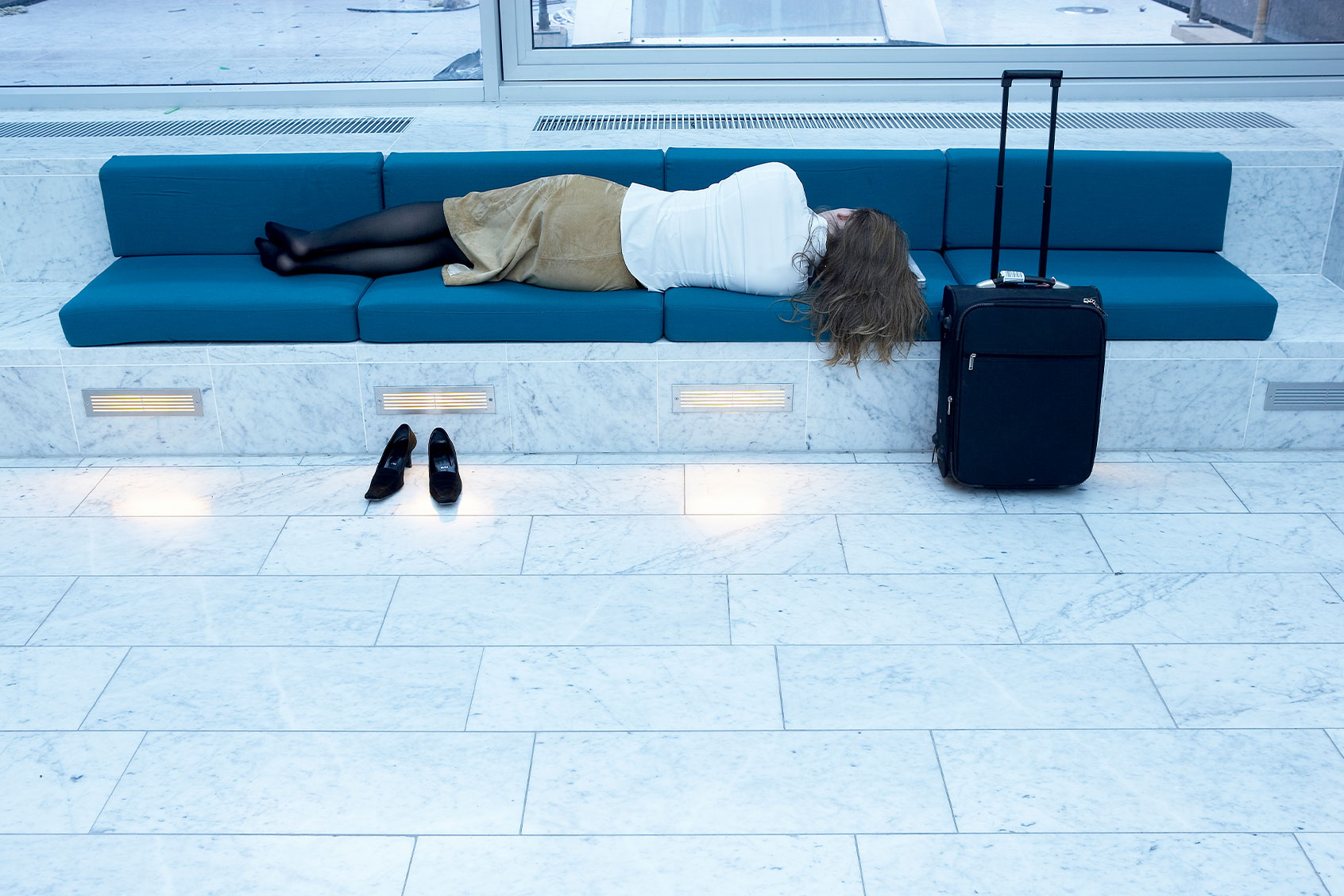 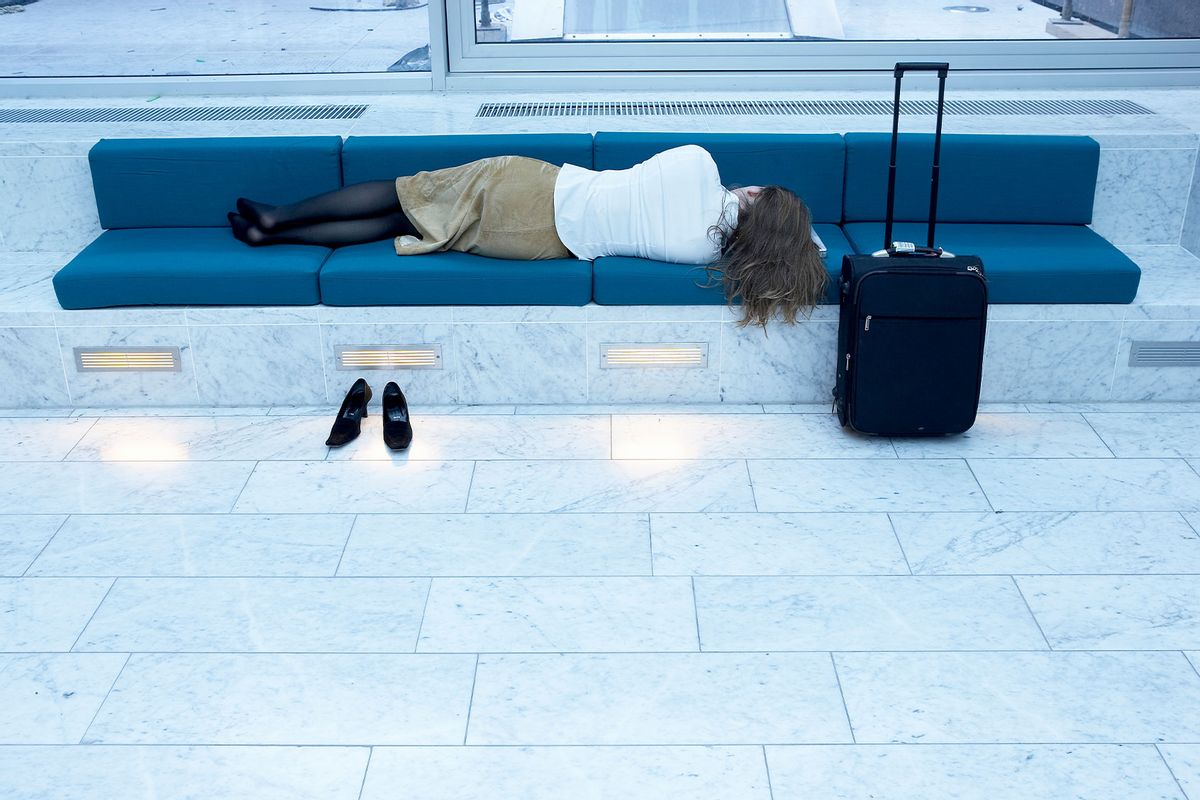 There is a truth ignored by travelers that should be universally acknowledged: No one wants to hear about your delayed flight.

This message was drilled into me when I was a high school senior and listened to David Sedaris read a version of what was later published in the New Yorker as “Standing By.” In the opening lines, Sedaris laments the delays and cancellations that infuriate travelers. “When it happens to you, it’s a national tragedy — why aren’t the papers reporting this, you wonder. Only when it happens to someone else do you realize what a dull story it really is.” I left the auditorium and waited in line where Sedaris signed my book and gave me handful of condoms, his signature gift for teenagers, and then I drove home, determined that I’d never complain about my boring travel disruptions again.

Instead, when I found myself reading all of Jandy Nelson’s lengthy novel “I’ll Give You the Sun” during an unexpected 8+ hour layover at Reagan National or trying to sleep while holding my bags at a gate in Atlanta, I thought about ways to craft my misfortunes into an entertaining story, one that was worth telling because it was not a litany of complaints but a string of pearls, something to show off during conversation.

Fortunately, life gave me more than enough opportunities to practice this skill. There was the time I was 19 and stranded at the Charlotte airport with no flights out until the next day. I had a midterm in the morning that I couldn’t miss and was too young to rent a car, so I ended up hitchhiking with someone who was also stranded. Jason, a 30-something-year-old man who could rent a car, drove me four hours to Charlottesville, Virginia. I impressed others with my dedication to maintaining my GPA.

The entertainment doesn’t end there. Once again, at 25, I found myself stranded on a layover in the Charlotte airport after a cancelled flight in a thunderstorm, and they weren’t giving out hotel vouchers. A man in his 40s — he was a classmate in my low-residency writing program, but we didn’t know each other very well — offered to let me spend the night in his guest room. His wife and kids were visiting his in-laws, so we sat on his couch and drank beers and bonded over missing the opening lecture while “Tokyo Drift” played in the background. The next day, he drove me back to the airport where we discovered that our one flight to Montpelier had turned into three. Our man vs. airline plight became the backbone of our unexpected friendship.

Of course, there were other travel disasters that didn’t involve the Charlotte airport. There was the time I was flying to study abroad in Paris and ended up stranded at the completely empty Quebec airport at 2 a.m. I spent most of that mishap crying and scared, so it never morphed into a funny anecdote. Instead, I folded that memory and stuffed it away.

Mass flight delays and cancellations, events that would normally be considered a national inconvenience, became a “national tragedy” because they illustrated the brokenness of the airline industry.

There were also misfortunes that didn’t take place in airports. There was the time I was in Monaco (pre-Uber/Lyft), and everyone — bus drivers and taxi drivers — refused to give my friend and me a ride, so we ended up walking through the dark, winding tunnels at midnight to get back to our hotel. It became a story that my friend and I reminisced about under the guise of can you believe that we …? But it was also terrifying.

This summer, news story after news story detailed travel woes like mine but on a larger scale. Mass flight delays and cancellations, events that would normally be considered a national inconvenience, became a “national tragedy” because they illustrated the brokenness of the airline industry.

Suddenly, Sedaris’ paradigm, the one I’d used to ignore or creatively reframe my travel misadventures, fell apart. Everyone — my dad, stepdad, friends, cousins, husband’s work colleagues — was complaining about travel problems. And some of those “dull” stories were actually being reported about in the papers and online and retweeted on Twitter.

Travel news continued to worsen with reports of violent passengers and assaults against flight attendants. Additionally, in June, the Memphis office of the FBI warned travelers to expect an increase in sexual assaults on planes over the summer.

As a 30-year-old stay-at-home parent with two young kids, I was grounded and couldn’t commiserate with anyone’s travel woes. I hadn’t flown since before COVID. Instead, I had a lot of time to sit in the house I still rarely left and think about the summers when I used to get on a plane and explore somewhere new.

After #MeToo and post-Dobbs, the focal points in my memories shifted. Instead of remembering my 19-year-old determination to take a midterm, I envisioned the way I’d held my phone between my thigh and the passenger side door, texting my mom updates on my flip phone as we wound through the Blue Ridge Mountains, hoping this stranger remained as benign as he first seemed. Instead of embracing the unlikely friendship I formed at 25, I remembered the way I’d locked the door of the guest room and crawled into bed, once again hoping an older man was as nice as he’d appeared.

I stood paralyzed with fear on an empty curb at a desolate time in a foreign city trying to get a taxi and praying I made it to my hotel safely.

The hardest memory to return to was 2 a.m. in Quebec, because my vulnerability had never been contorted into an amusing story. I had walked through an empty, dark airport, unable to locate a single employee. Tears dripped down my face when I finally found someone working at the lost luggage counter, and they eventually gave me a voucher for a hotel. I stood paralyzed with fear on an empty curb at a desolate time in a foreign city trying to get a taxi and praying I made it to my hotel safely. It was the same later that summer when I walked the dark streets of Monaco in a strapless dress, hoping I wouldn’t get hit by a car or leered at by a man or worse.

When I was 16, I enrolled in a summer program for high school students at Columbia University. Before I left for New York City, my worry-prone maternal grandmother told me to be careful; someone could tie rocks on your feet and throw you in a river. I made fun of her excessive worry and dismissed her warning as unwarranted and parochial. I’d been to New York before. I knew I was likely safer there than in Memphis. At 16, I didn’t think twice about dressing up with my suite for a midnight showing of the “Rocky Horror Picture Show” at the Angelika or sneaking into a hookah bar or navigating the dark streets around the downtown pier after Fourth of July fireworks.

After all, those moments, the ones where you experience something new, something that shocks your senses or shifts your existing paradigms — that’s what makes travel exciting. I spent the decade before I had kids making those memories: Arresting architecture observed in Park Güell, eclairs purchased from a pink boulangerie in Paris, a perfect bagel eaten on the grass in Central Park, vibrant lily pads viewed from Monet’s red bridge, chilling sleet endured to witness the awe of Glacier National Park, white sangria sipped in an outdoor café in Lisbon, the “International Orange” of the Golden Gate Bridge on a fogless day.

This summer, I began to understand that none of those wondrous, once-in-lifetime experiences negated the inherit risks of traveling, especially when you’re a young woman.

None of those wondrous, once-in-lifetime experiences negated the inherit risks of traveling, especially when you’re a young woman.

I’m not sure what shifted the focus of my memories this summer. Maybe it’s becoming a mother and trying to raise a daughter in a world where her equality feels impossible and always at risk. Maybe it’s growing older and appreciating my worry-filled grandmother’s anxiety a little more (even if its excessiveness still makes my eyes roll). Maybe it’s that I haven’t traveled for pleasure in years, and it’s easier to analyze experiences from a distance. And maybe it’s also that last week a woman in my community — Eliza Fletcher — was abducted and murdered two miles from my house while running down the same street that I drive every morning to take my kids to preschool.

Honestly, I think it’s a little bit of everything. COVID and Dobbs and Eliza Fletcher’s murder and mothering and growing older have made it impossible to feel safe.

I now understand there was only a thin thread of chance that separated my “dull” travel stories from becoming national news. There always is. Even if I’m just traveling to Target or the grocery store or the neighborhood park.

David Sedaris’ essay “Standing By” isn’t just about boring travel tales; it’s about how flight delays and cancellations and rushing to gates, illuminate people’s worst behaviors. Sedaris closes the essay by writing, “We’re forever blaming the airline industry for turning us into monsters: it’s the fault of the ticket agents, the baggage handlers, the slowpokes at the newsstands and the fast-food restaurants. But what if this is who we truly are, and the airport’s just a forum that allows us to be our real selves, not just hateful but gloriously so?”

I hope he’s not right. For women, the repercussions of bad — sometimes horrific — behavior are so severe. I hate that’s the world we live in, and I can’t imagine sending my daughter out into it, especially when she’s older and wants to make her own memories on the streets of new cities.

So, for now, I sit at home and listen to my friends tell me about their journeys, thankful to hear the stories of their flight delays, ignoring how “dull” they how. Because, a truth ignored by travelers that should be universally acknowledged: a story is beautifully “dull” if you make it home, especially if you’re a woman.

about women and travel:

Is your gas stove bad for your health?

We’re still in January, but somehow it feels like there are already thousands of new beauty trends—all born from TikTok.