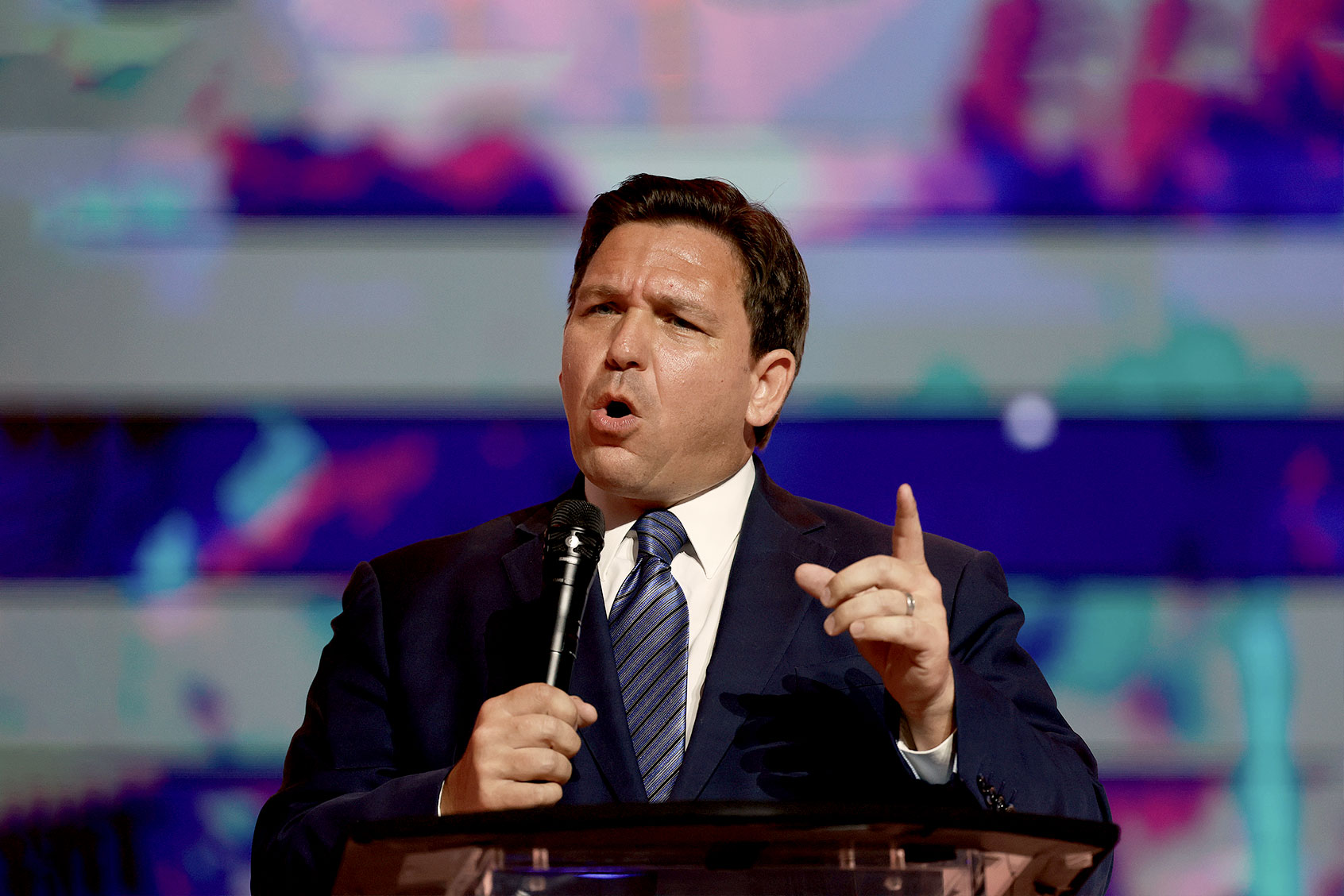 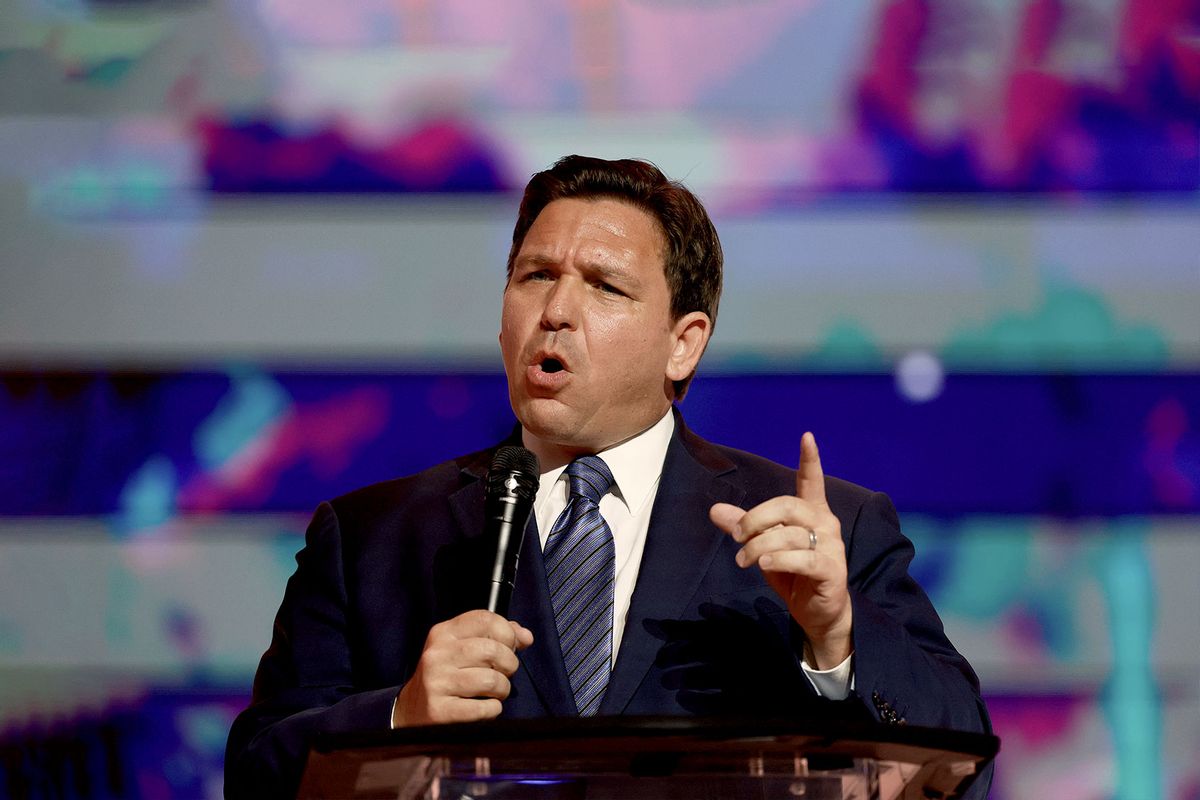 For months, Republican governors eager to get a piece of Donald Trump’s ability to get attention through race-baiting have engaged in a bizarre and dehumanizing stunt: Sending busloads of often deeply confused refugees to places perceived as “liberal enclaves.” Texas Gov. Greg Abbott has sent buses of immigrants to Washington D.C. and New York City, claiming that he’s somehow exposing the hypocrisy of Democratic leaders who have said immigrants are welcome. In April, Gov. Ron DeSantis announced plans to use taxpayer funds to bus migrants to blue states, saying, “if you sent them to Delaware or Martha’s Vineyard or some of these places, that border would be secure the next day.”

The ugly troll leveled up this week, when DeSantis did just that, chartering planes to Martha’s Vineyard carrying about 50 people who recently arrived from Colombia and Venezuela. Martha’s Vineyard, an island off the coast of Massachusetts, is known as a vacation spot for wealthy East Coast types. It’s clear DeSantis was hoping to elicit an outraged reaction from residents that would “prove” his point about blue state liberals. That ended up backfiring, as the migrants received a warm welcome instead of a hostile reaction. As Heather “Digby” Parton wrote at Salon, the locals at Martha’s Vineyard offered “the new arrivals food and shelter, along with legal advice and emotional support.” Sen. Elizabeth Warren, D-Mass., responded by tweeting that “Massachusetts is fully capable of handling asylum seekers.” It was soon revealed that the refugees had been recruited to get on the planes with lies about how they were going to Boston to find jobs.

Conservative media is trying to salvage this by running headlines that focus on Democratic anger, while ignoring that the anger is over the inhumane treatment and not over the idea of immigrants living in New York, D.C. or Massachusetts. But what they and DeSantis should have already known is that this stunt was unlikely to expose “liberal hypocrisy.” After all, Abbott’s been doing this for months, with little effect, for one obvious reason: The big blue cities that draw so much vitriol from right-wing pundits are already diverse places with large immigrant populations.

And yet, as DeSantis’ failed attempt at leveling up the troll shows, Republican politicians are still clinging to the idea that there’s a vein of liberal hypocrisy to be tapped on this front. What’s little discussed, however, is where this idea came from. The notion that white liberals want diversity for others, but not themselves, has become an article of faith on the mainstream right only recently, after being heavily hyped by folks like Tucker Carlson of Fox News. Where it came from originally, however, is from fringe white nationalist and neo-Nazi groups, and from the white supremacist forum Stormfront in particular.

“This anti-immigrant narrative is serving as the glue that brings together various sects of the hard-right to uplift the idea that migrants are coming into the country to replace white Americans,” Freddy Cruz, a research analyst from the Southern Poverty Law Center’s Intelligence Project, told Salon. The “great replacement” is a white nationalist/neo-Nazi conspiracy theory that used to be fringe but has gained traction in the mainstream GOP in recent years.

Since its inception, a huge obsession on Stormfront has been this notion that “elites” — though they often just come right out and call them “Jews” — want to impose “diversity” on working and middle-class neighborhoods, while living in white-only enclaves themselves. Their slogan for this is “diversity for thee, but not for me.” Just a casual search of the forum shows how much the users obsess about “the hypocrisy of rich liberals who promote ‘diversity’ but who also live in 99% white neighborhoods,” as one user griped.

Or, in another typical Stormfront rant about “limousine liberals”: “Hey scumbags! How about sending your kids to the ‘inclusive’ public schools or living in the ‘diverse’ neighborhoods you patronizing bastards crated [sic]!?”

As one can imagine, the posters at Stormfront are ecstatic to see their ideas mainstreamed in Republican circles by Carlson, Abbott and DeSantis. As one poster said, “White people are waking up and the fact that news anchors at Fox News are pointing out liberal hypocrisy on things like rich liberals living in the Whitest neighborhoods possible is a good sign.”

Like DeSantis himself, the folks at Stormfront are ignoring the way the migrants were welcomed at Martha’s Vineyard, and declaring that DeSantis will “wake up the American people to the fact that Biden and his CRIMINAL JEW/NWO GANG are destroying the country with hordes of MILLIONS of illegal aliens.”

By harping on this notion that white liberals don’t want neighbors of color, white nationalists claim justification for their own racist beliefs. The idea is that, secretly, all white people are racist, and that liberals are just pretending otherwise to signal virtue. But that’s hardly the only white supremacist belief being mainstreamed by DeSantis and Abbott with these stunts. The other, equally virulent one, is that immigrants of color are “parasites” who are only here to be lazy and live off the taxpayer dime.

Jeremy Redfern, a DeSantis aide, tweeted a picture of former president Barack Obama’s seven-bedroom home in Martha’s Vineyard with the caption, “Plenty of space.” Implicit is the idea that what immigrants are seeking is a place to live rent-free. It’s a cheekier version of the Stormfront poster who ranted that immigrants use up “all the welfare and social programs that were created for American citizens.”

Reporters who actually spoke to the people who were taken in by DeSantis’ stunt heard a very different story, however.

“Whether that’s here or Boston or wherever, we just want the opportunity to work,” Yerkyn Torres, one of the migrants sent to Martha’s Vineyard, told the Washington Post.

“I thought I was coming to Boston,” Ardenis Nazareth, a construction worker, told the New York Times. He explained that “I would do anything to provide for my daughters” and hoped to find work to do so. He was understandably upset at being on an island where such work opportunities are non-existent.

Between “shipping” these folks like they’re cargo and putting out press releases saying blue states should handle “the care of these individuals,” DeSantis is borrowing the white supremacist framework that regards immigrants not as contributing members of society, but as unwelcome burdens. Like anyone who has come a long way with few resources, the recently arrived refugees obviously need some help. But, as they say themselves, they are here to join American society, to work, and to contribute. As economic studies show time and again, immigrants not only contribute to the economy, but often do so in ways that the native-born population doesn’t, such as by taking jobs in communities facing worker shortages. With the current employment boom — there are two job openings for every unemployed person right now — this racist narrative about immigrants makes even less sense.

A stunt like this damages the people used this way, who report being lied to in order to get them on a plane to Martha’s Vineyard. It’s also dangerous on a national level. DeSantis is further helping mainstream white nationalist talking points gleaned from the very fringes of society. As Cruz from the Southern Poverty Law Center explained, “we are seeing extremist anti-immigrant militia groups celebrate DeSantis’ immigration stunt.” These are the same groups, he explained, that have taken vigilante actions such as “launching minutemen style detainments of migrants in places like Arizona and Texas.” Reviewing Stormfront, one can see how excited and emboldened these radical racists feel by these kinds of actions. The U.S. has already seen a dramatic rise in hate crimes fueled by the “great replacement” and other white nationalist conspiracy theories and ideas. DeSantis and Abbott may act like these stunts are mere trolling, but it’s contributing to a discourse that empowers white nationalists and fuels political violence.

Peter Obi, Oseni Rufai And The Import Of An ‘Inconsequential’ Manifesto, By Rotimi Akinola

Just a few weeks after premiering Don’t Worry Darling and My Policeman at film festivals around the world, leading man