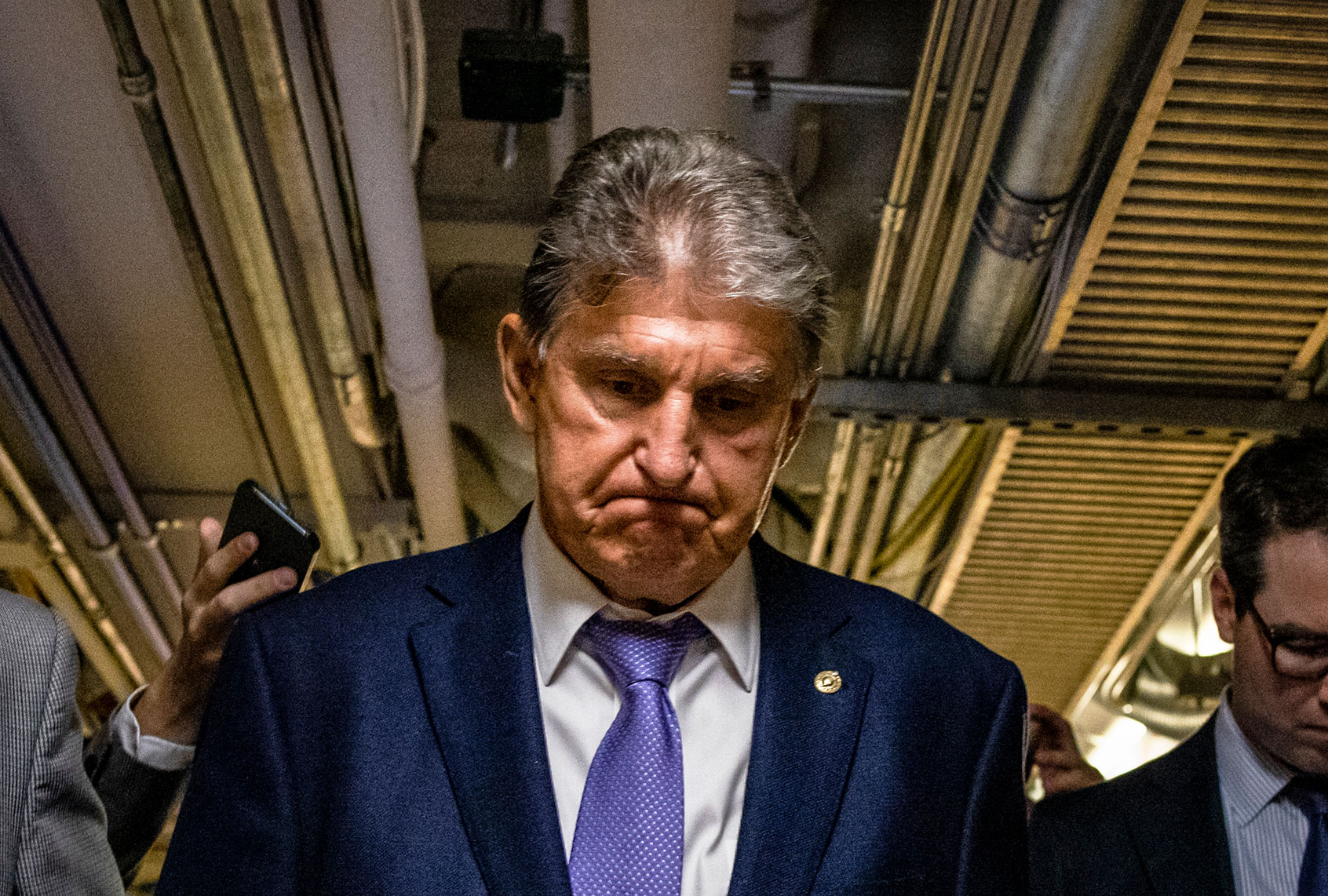 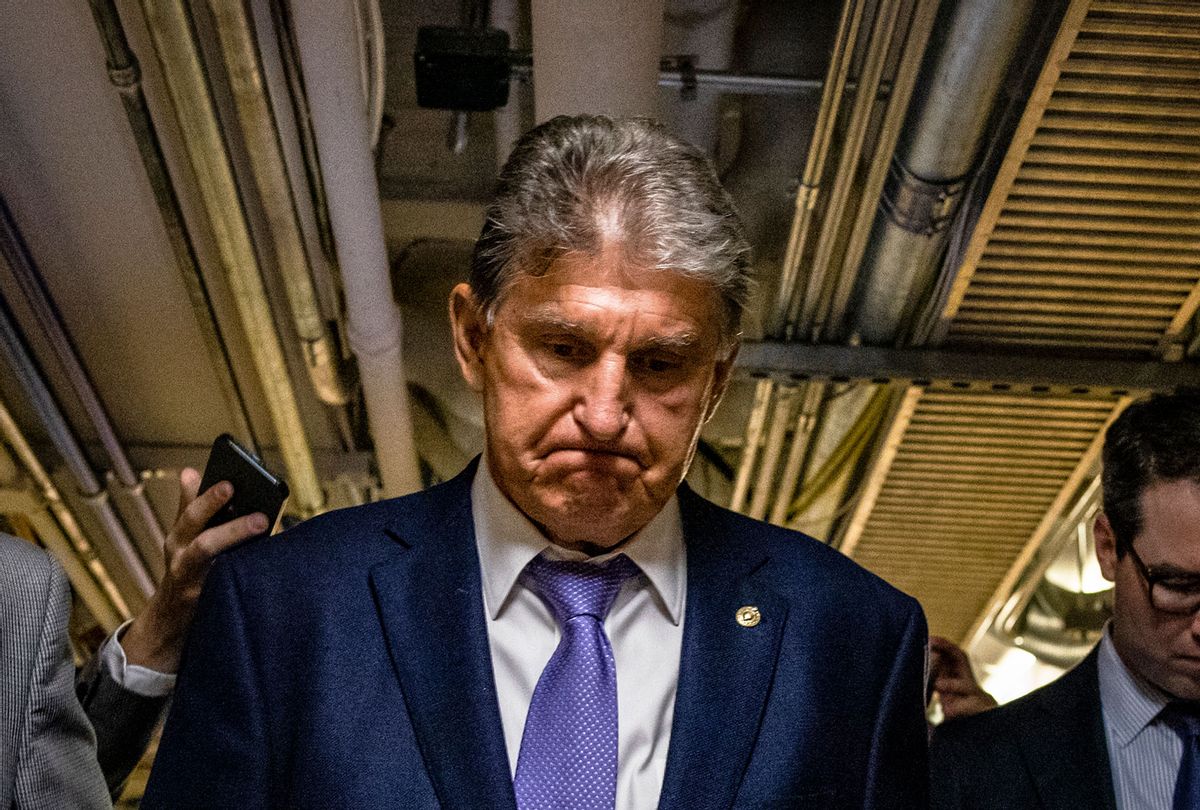 With President Joe Biden set to sign the Inflation Reduction Act into law on Tuesday, progressive members of Congress are increasingly speaking out against a side agreement that Democratic leaders reached with Sen. Joe Manchin in order to secure final passage of the $740 billion climate, tax, and healthcare measure.

The side deal focuses primarily on permitting changes that would help fast-track fossil fuel infrastructure—including a long-delayed pipeline in Manchin’s home state of West Virginia—even as scientists say that meeting key emission-reduction targets requires a swift end to all new oil and gas development.

Because its provisions are outside the bounds of the budget reconciliation process, the permitting agreement must follow a legislative track separate from the Inflation Reduction Act (IRA), which the Senate passed on August 7 and the House gave final approval on Friday.

The permitting legislation, a major boon to Manchin’s fossil fuel donors, would need 60 votes to pass the Senate, requiring some Republican support as well as unanimous backing from the Democratic caucus.

While progressives in the Senate and House voted for the IRA despite concerns about the bill’s handouts to the fossil fuel industry, they quickly made clear that they don’t feel bound to support the permitting proposal, which climate groups warn would gut crucial laws such as the National Environmental Policy Act (NEPA) and shield dirty energy projects from legal challenges.

In a statement to The American Prospect on Tuesday, Rep. Rashida Tlaib, D-Mich., said that “handshake deals made by others in closed rooms do not dictate how I vote, and we sure as hell don’t owe Joe Manchin anything now.”

“He and his fossil fuel donors already got far too much in the IRA,” Tlaib added.

Tlaib’s comments to the Prospect echo the sentiments she expressed in a statement shortly after final passage of the IRA last week.

“My yes vote today is not quiet acceptance of the Manchin poison pills,” said the Michigan Democrat. “We will be united in defeating the separate Manchin ‘permitting reforms’ that will accelerate climate change and pollute Black, brown, Indigenous, and low-income communities.”

“Now that the IRA has passed,” she continued, “there is absolutely zero reason that Congress should follow through on a backdoor handshake deal that directly undermines the purpose of the IRA. Manchin went back on his word to get [Build Back Better] done, and we owe him nothing now.”

Tlaib isn’t the only House Democrat speaking out against the side deal, a draft form of which has been circulating among lobbyists and lawmakers in recent days.

One draft document obtained by Bloomberg earlier this month bore the watermark “API,” the acronym for the American Petroleum Institute, a powerful oil and gas industry lobbying organization.

Rep. Raúl M. Grijalva, D-Ariz., the chair of the House Natural Resources Committee, blasted the side deal and vowed to fight it following passage of the IRA, which Democrats and environmentalists have hailed as a historic climate action measure even as they acknowledge its serious flaws.

“Environmental justice communities know all too well that permitting reform is nothing more than industry code for the systematic gutting of our most foundational environmental and public health protections, like the National Environmental Policy Act,” said Grijalva. “Polluting industries may have won that promise in a deal with a select few, but I intend to do everything in my power to convince the rest of my colleagues to break it.”

Amid reports that Democratic leaders are planning to attach a permitting measure to must-pass spending legislation such as a bill to keep the government funded, Grijalva is demanding a standalone vote on the deal.

“We’re going to start early to urge a separate vote,” Grijalva told The Hill on Friday. “One of my prerogatives is that if I’m opposed to it—to vote against it.”

Rep. Jared Huffman, D-Calif., for his part, told Politico that he is “not going to be steamrolled into a bunch of fossil fuel giveaways just because Manchin cut a deal in a closed room with Chuck Schumer.”

“He doesn’t get to run the show on something like this,” Huffman added, “and many of us will have a say on what that deal looks like if it even happens.”

Progressive opposition to the permitting deal inside Congress is mounting as grassroots advocacy groups and frontline organizations ramp up their mobilizations against the agreement, warning it poses a severe threat to the climate and vulnerable communities.

“This permitting wish list is an unacceptable sacrifice of the communities and environment of our region,” Appalachian Voices declares in a new petition urging Congress to reject the plan, which would clear the way for the Mountain Valley Pipeline and other emission-spewing fossil fuel projects.

“The proposals included in the list would limit state authority under the Clean Water Act, require federal agencies to rush review processes, and limit—or even avoid—review under the National Environmental Policy Act,” the petition continues. “These measures would put a great deal of strain on federal agencies and limit their ability to thoroughly vet permits for polluting infrastructure. The wish list would ultimately benefit the fossil fuel industry and bring further harm to our climate and our futures.”

“We’re in a life-and-death struggle for a working planet; the IRA advances our chances, and permitting reform would reduce them. The moral choice is therefore obvious,” argued McKibben, the co-founder of 350.org. “Manchin played games for years; it’s time to play games with his game.”

Watergate figure John Dean warns Trump may pull a “dictators’ ploy”: “There will be violence”