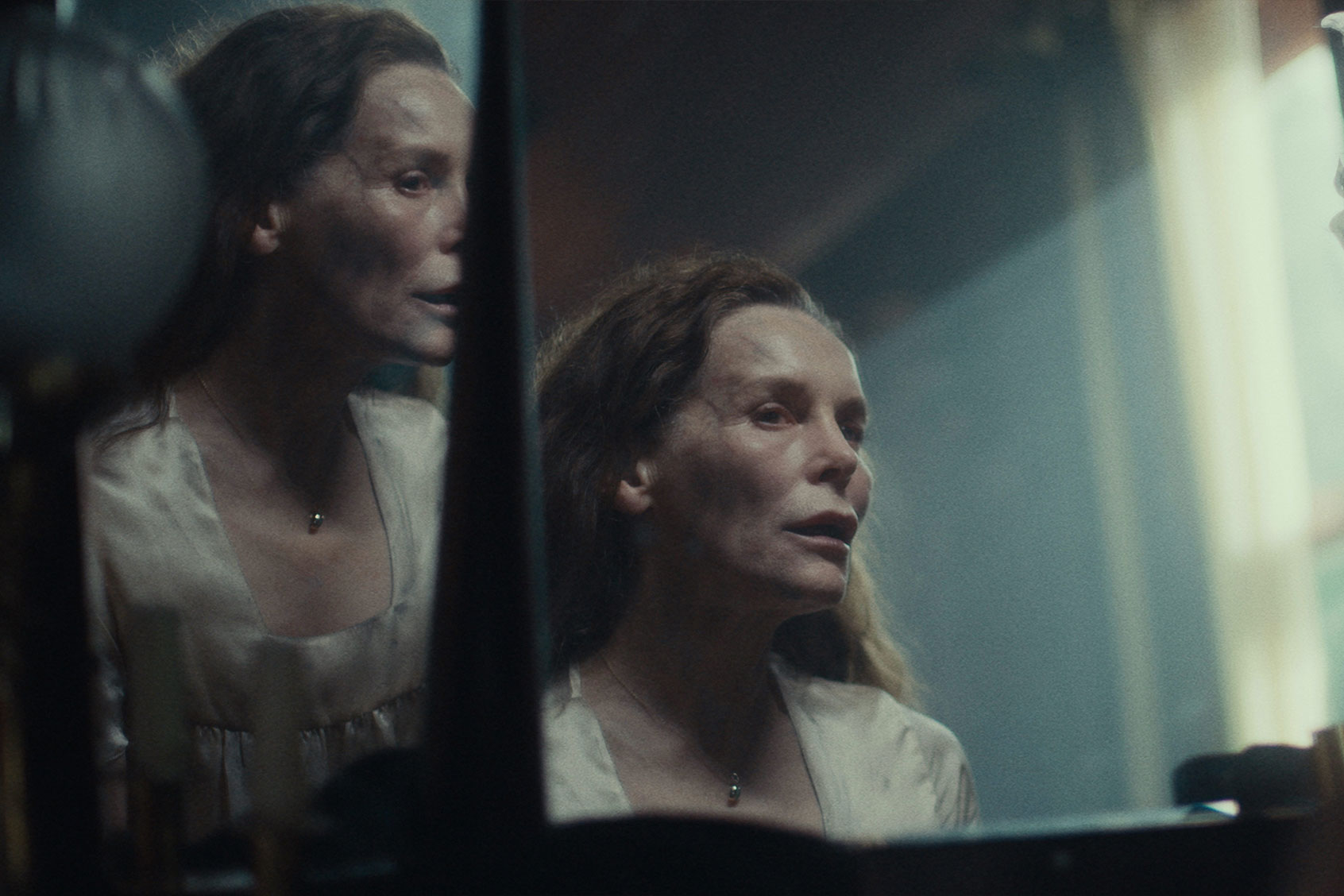 Alice Krige has a face, a voice, and that luminous alabaster skin, that makes her both regal and yet also almost otherworldly. She is at once haunting and haunted. These qualities are very much in evidence in her striking new folk horror film, “She Will.”

Krige plays Veronica Ghent, an actress who just had a double mastectomy and wants to convalesce at a rustic retreat in the Scottish Highlands. However, in addition to her physical pain, the news reports that famed director Eric Hathbourne (Malcolm McDowell) is remaking a movie that Veronica starred in as a teen. That information resurrects a trauma he inflicted on her during their “close” working relationship when she was 13.

While Veronica wants solitude, her quiet at the retreat is disrupted by a group of artists in residence led by Tirador (Rupert Everett). Moreover, the site of the retreat is a strange place where witches were once burned. (Their ashes in the land are said to have therapeutic properties.)

Krige plays Veronica with considerable force. Although she is a woman who may have disturbing dreams, or dark thoughts, her mind remains sharp. (She is wonderfully bitter scolding her aide, Desi (Kota Eberhardt), “I had a mastectomy, not a lobotomy.”) She is also particularly inspired — one might say possessed — when she creates a painting out of charcoal and peat. As she copes with her physical and psychological wounds, Veronica finds supernatural powers that give her a sense of agency. What she does with her new-found abilities is what makes “She Will” so satisfying.

Krige spoke with Salon about playing the indomitable Veronica.

The opening scene has Veronica applying makeup and talking about putting on a mask as a form of preservation. There is sense of performance, but she is hiding. It’s avoidance. Can you talk about how Veronica considers herself and presents herself?

She is savage, acerbic, rude, unkind, and really very unpleasant. She is not merely putting on a mask. She’s kidding herself. She has become the mask. It is a radical defense to keep the world out. She had a traumatic experience as a teen on a film set, and it’s never talked about. She repressed it and it leaves her haunted, lonely, and unable to trust. Progressively, the mask becomes a defense. It’s not about preservation. It’s destroying her. She’s lost herself in the mask. The mask is one of “inaccessible movie star,” though she describes herself as a “failed movie star, washed up, past her sell by date.” It is her only way of keeping the world at a very long arm’s length. I don’t think it’s “I can’t be bothered.” It is “I don’t want to make myself vulnerable in any way.”

The mastectomy makes her feel like “less of a woman,” and of course, the trauma she’s been repressing regarding Hathbourne, has robbed her of her sense of self as well. Can you talk about Veronica’s power and powerlessness? How much agency does she have?

She is under this brusque, superior, cold exterior. She is wounded and has simply no way of escaping what she’s got trapped in, which is loneliness. Something happens when you’re a teen, you think it’s your fault. Somehow, you asked for it, or provoked it. She didn’t. She was just this exquisite, beautiful, young [girl] and she is enormously wounded. She is trapped within the trauma and has absolutely no way out. But there is a very interesting moment at the beginning where she has hit an absolute wall, post-surgery, and is utterly alone, and can’t acknowledge that she’s in a state of despair. Then, the TV flashes that Hathbourne is about to be knighted, and remake the film, and there’s this line of 14-year-olds snaking around building. She knows it’s going to happen again. She’s furious and angry and even more angry by what she’s just seen. She has no inkling about what’s about to happen. The universe, the cosmos conspires to take her on a journey to face the truth of what happened, and the truth of her mutilated body. She arrives at this place where 3,000 people were burned, and the earth is suffused with their presence in the peat, and the water, and the earth. She is so ready. It comes to her rescue. She starts to discover dimensions she has never encountered before.

Ever since “Ghost Story,” you have been cast in films with supernatural storylines, such as “Sleepwalkers.” Can you talk about the appeal of these kinds of projects?

It’s not like I go in search of them. There must be something a bit odd about me because they kind of just come to be. But what’s wonderful about them is that many of them deal with a heightened reality. That enables you to explore a reality that is more intense than the mundane. It’s very exciting, and wonderful to play in the sandpit without consequences. I get to go there and then I can go home at night without having to do any real damage. 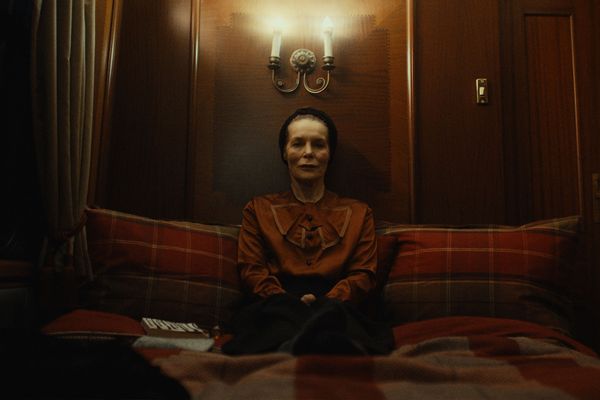 Alice Krige in “She Will” (IFC Midnight)There is a topical theme of #MeToo in the film as Veronica has been abused by Hathbourne. He claims it was “a different time,” and that they were “very close.” Given your work in the industry over time, what observations do you have about the relationships between actresses and their directors?

I thankfully, have never had this experience, for which I’m very grateful, I would have found it enormously traumatic, and unbearably distressing. One is certainly, as a working actress, vulnerable. To do the work you have to make yourself vulnerable and be prepared to walk onto the set and be emotionally naked and accessible. It’s the only way you stand a chance of accessing the other actors and [the character]. It does expose you, and directors and producers are in powerful position. I am not thinking about power dynamics when I walk onto a set. All I am thinking about is [the character], and the relationships being explored in the creative space. It’s such a heightened process.

And yes, it was what happened in another time, but that doesn’t make it acceptable. I think Malcolm [McDowell] created a character who is enormously complex, and there is an extraordinary moment that Malcolm has you believe for one moment that Eric Hathbourn faces himself. Malcolm is not like the roles he plays, but he plays them extremely well. He is outrageous and outspoken and so without a filter. If I was like that, I’d just be offensive. It would come out all wrong and horrible. Somehow, he twinkles his way through.

There is a scene where Veronica wants some alcohol and Desi warns her that wouldn’t be advisable. Veronica retorts, that “If you want to survive in this sh*tstorm called life, you won’t do it by doing what is advisable,” and talks about teeth and claws. What is your approach to life?

Every role I take is a gamble or a huge risk. You step into the void. It is death if you think you know how to do it. It’s like a start from beginning each time. The one thing I hope I’ve learned in all these years is that at a certain moment, to let go of the safety blanket of all the prep I’ve done, and just be there and trust. That is the ultimate risk to simply trust that it’s going to happen. I don’t gamble in my own life much, except I do, I supposed. I’ve produced a couple of movies, and I’m about to produce some more. That’s a gamble of extraordinary order. You set out on path don’t know how where or how it is going to end. Moment to moment, it’s a gamble.

Are you someone who seeks revenge, like Veronica, when wronged?

I didn’t think that Veronica was seeking revenge. She wanted [Eric] to tell the truth. What happens is a consequence of his inability to tell the truth. That was where I was coming from. I know a lot of people experience it as her setting out for revenge, but I think she’s carried along but once she has entered these other dimensions, after the first couple of experiences, she realizes she has agency, she sets her sights on actually confronting him. She wants him to tell the truth, because for years, he has lied.

I let stuff roll off me like water off a duck. It is a waste of energy to bear a grudge. We are all struggling, just scrambling around doing our best, sometimes not doing our best, always failing. There is no time or space or energy for revenge. If someone hurts you, in the end, if you hold onto it, it’s bound to hurt you. Revenge can hurt you as much as the one upon whom you exact revenge.

Veronica asks Desi if she would want to relive her childhood. Would that appeal to you?

I had the happiest childhood, so yeah, I wouldn’t mind going there again.

“She Will” is out in theaters and on demand July 15.

Why the war in Ukraine might make root canals more difficult

Teflon Don: How Trump keeps getting away with it all — even top secret nuclear documents

The elaborate Manti Te’o girlfriend hoax, its aftermath and where he is now

Neil MockfordGetty Images As someone who’s experimented with both bangs and a pixie cut, barrettes have been a part of