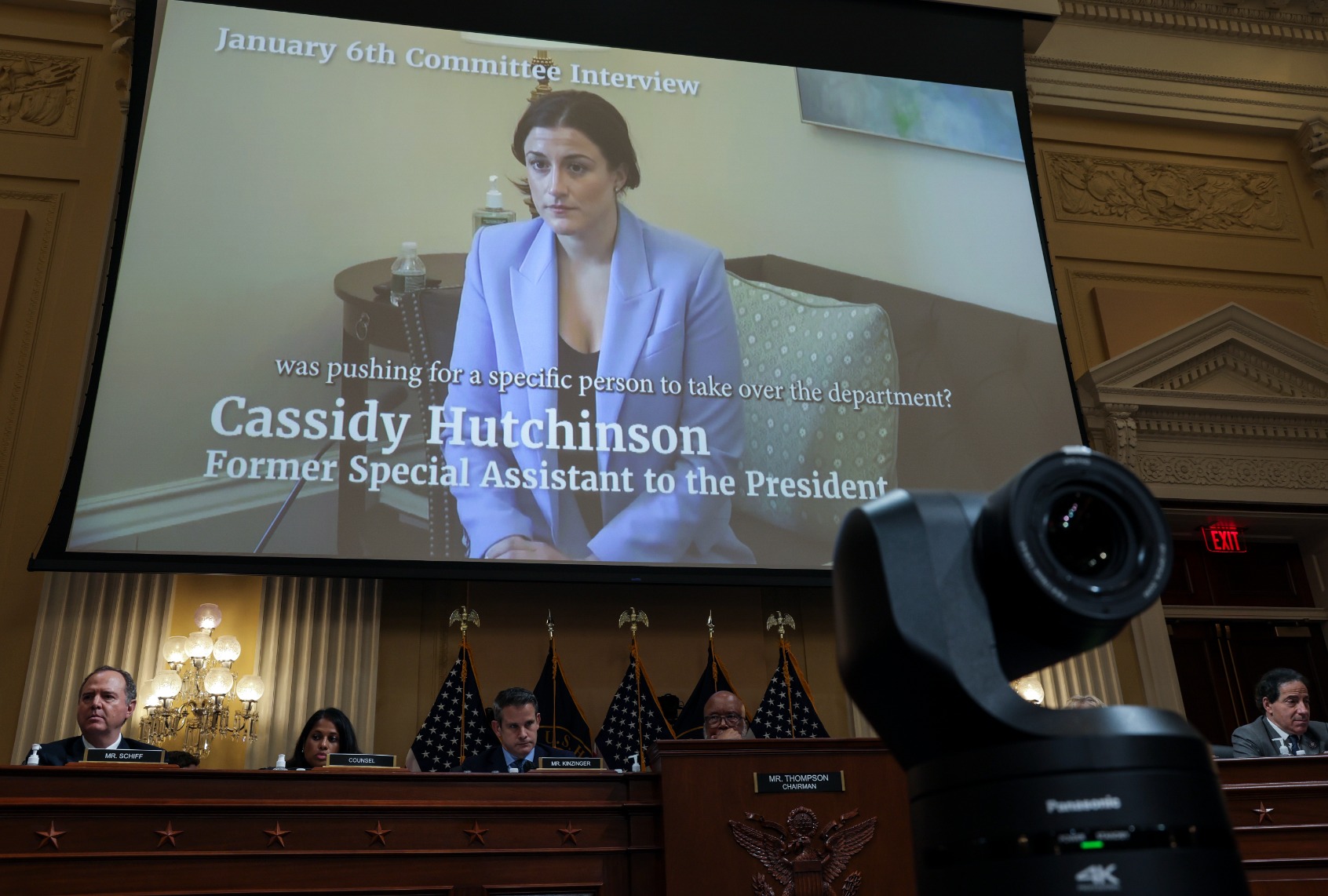 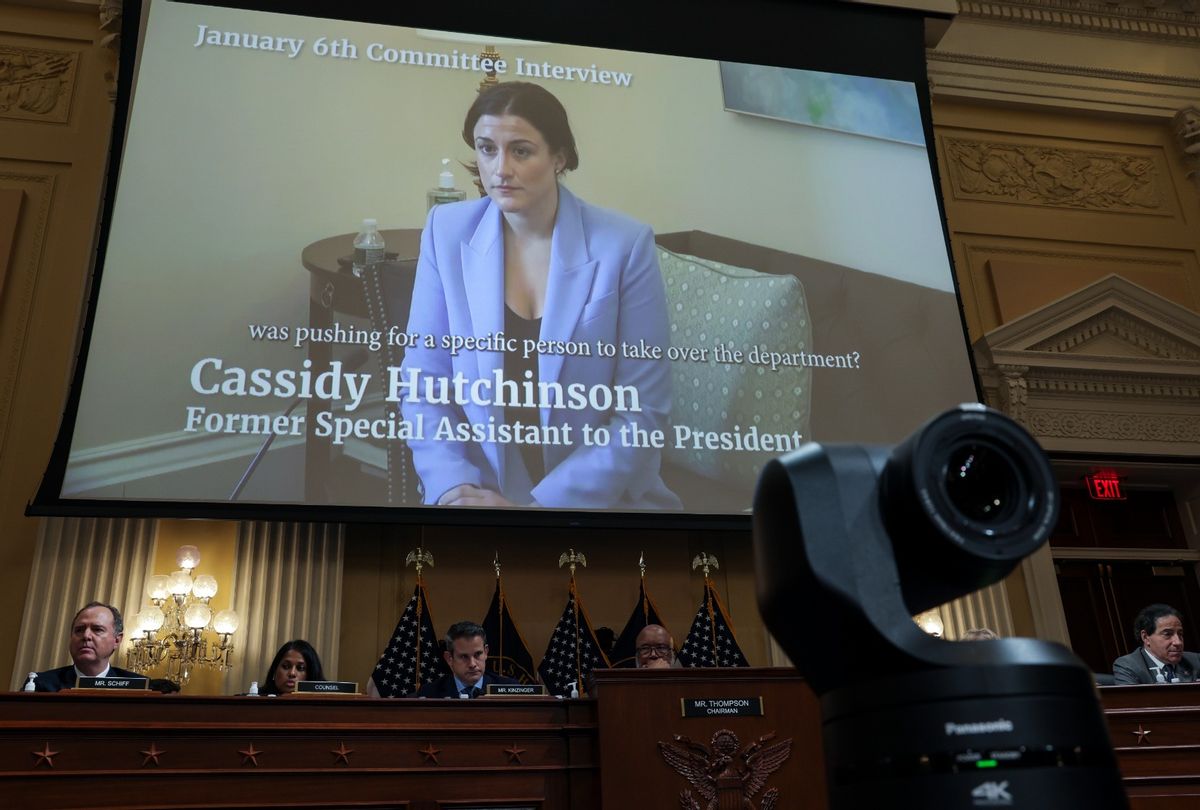 In the public hearings so far, the House Select Committee on January 6 has marshaled facts in fastidious detail showing that former President Trump’s attempted coup was plotted and organized by the president himself with the help of his chosen accomplices and enabled by Cabinet members, aides and staffers who knew it was wrong but said nothing. The first four hearings made it clear that Trump and his henchmen knew the election had not been stolen and yet they insisted to his followers that it had been. They launched spurious lawsuits, pressured election officials, tried to corrupt the Department of Justice and strong-armed Vice President Mike Pence all in an attempt to overturn the election. But we hadn’t heard any direct testimony — until yesterday — that Trump was aware in advance that Jan. 6 could turn violent but incited the mob anyway. Now we know that he even knew that day that many in the crowd were armed. Thanks to Cassidy Hutchinson.

The former Trump White House aide and assistant to Chief of Staff Mark Meadows gave extended live testimony on Tuesday about the tumultuous days leading up to Jan. 6 and on the day itself. There were colorful anecdotes about the president throwing his lunch against the wall when he heard that former Attorney General Bill Barr had told the press there was no vote fraud and a somnolent Meadows telling a frantic White House Counsel Pat Cipollone that Trump didn’t want to stop the riot because Pence deserved it. Her testimony that she was told Trump had tried to grab the wheel of the presidential SUV and force the driver to take him to the Capitol after his speech on the 6th has dominated the media, however, mainly because a source has disputed her account so that gives them a juicy “he said/she said” storyline.

But those stories are not particularly relevant to the meat of Hutchinson’s testimony, which addressed the stunning fact that just as people had begged Trump not to continue trying to overturn the election once the court challenges had come to the end of the line and tried to stop him from listening to daft conspiracy theories, people were once again trying to stop him from executing his final plot to overturn the election by personally leading his mob up to the Capitol to stop the vote count. As Amanda Marcotte wrote in Salon, “Trump’s minions saved him from himself.” Cipollone made the point most clearly, telling Hutchinson: “We’re going to get charged with every crime imaginable if we make that movement happen.”

Trump said in his speech that he would “be there with you,” but there was a question as to whether he really meant it or if he was just saying it to inspire them to do it. According to Hutchinson, this was very much a discussion in the White House for days leading up to Jan. 6. Trump was adamant about going up to the Capitol himself. It is unclear what he planned to do once he arrived, but there was a hint offered in Hutchinson’s testimony about a conversation she had with Rudy Giuliani on January 2 after a meeting between him and Meadows:

Later Hutchinson testified there had been talk that Trump might give another speech or would go into the House chamber, all of which suggest some kind of putsch in which Trump saw himself marching into Congress uninvited (which a president is not supposed to do because it is a co-equal branch of government) and doing something dramatic like running into the Senate chamber and seizing the dais or personally handing the “alternate elector” votes to Pence and ordering him to count them. Whatever he had in mind, he expected to have a riotous mob backing him up.

Hutchinson said that after that discussion with Giuliani she went back into the White House and asked Meadows about it and he dolefully replied as he doom scrolled through his phone, “There’s a lot going on, Cass, but I don’t know. Things might get real, real bad on January 6.”

The White House had been receiving a flurry of information from a variety of government sources during those first days of January that there was a serious threat of violence. On the 3rd they received a specific threat assessment that showed the Proud Boys were planning for violence on the 6th but were targeting Congress instead of counter-protesters. Hutchinson couldn’t say that she’d ever heard any specific discussions about their involvement in the rally and planned march but she did recall hearing the words Proud Boys and Oath Keepers when “Giuliani was around.”

RELATED: What Cassidy Hutchinson told us — and why we should have known it already

On the night of January 5, Hutchinson testified that Trump ordered Meadows to call his henchmen Roger Stone and Michael Flynn who had set up a “war room” at the Willard Hotel with Giuliani, John Eastman, Steve Bannon and others. (Stone was careful not to be with them in the suite at the Willard but he did meet with a member of the Oath Keepers who has since pleased guilty, just hours before the insurrection.) Meadows also planned to go to the Willard personally for a meeting but was talked into calling in instead. We don’t know what they talked about on these calls but it is a direct link between Trump and the plotters at the Willard who had ties to Proud Boys and Oath Keepers who have been charged by the Department of Justice with seditious conspiracy.

Just as Trump was preparing to give his big speech the next day he was told that people in the crowd were armed and dangerous and that many were refusing to come through the metal detectors and were instead gathering outside the perimeter. Trump told the Secret Service they wouldn’t hurt him, and demanded that the metal detectors be removed. Likewise, when Meadows was informed of the same thing, he said “all right, anything else?” Neither one of them seemed surprised to learn this and neither one showed even the slightest concern. If one didn’t know better, one might just think they knew in advance that there would be armed demonstrators in that crowd.

Remember what Mark Meadows told Cassidy Hutchinson back on January 2 after meeting with Rudy Giuliani. “There’s a lot going on, Cass, but I don’t know. Things might get real, real bad on January 6th.” They knew. That was the plan. Amazon Has a Secret Outlet That’s Filled with Designer Deals