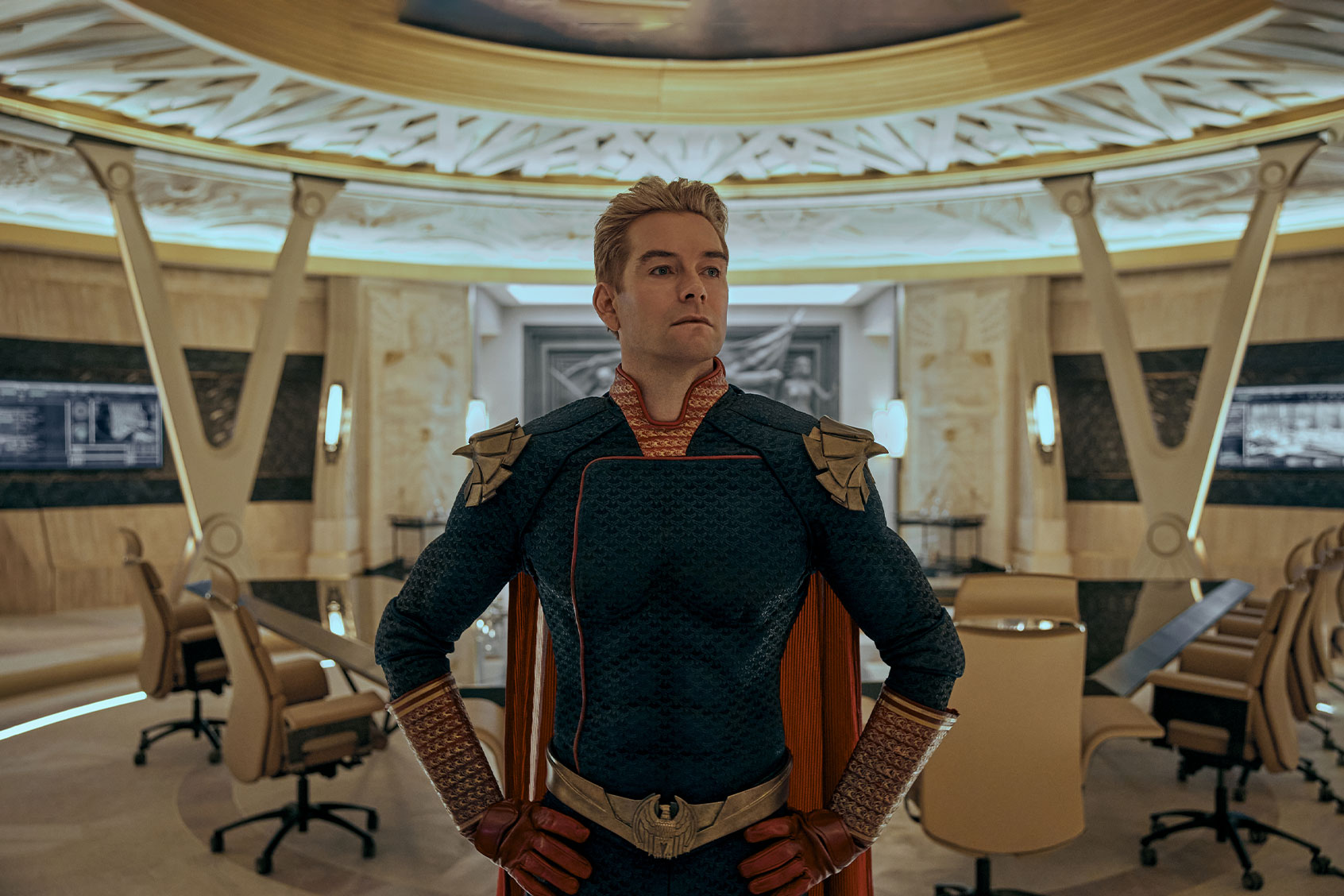 Before the third season’s title card appears, “The Boys” thrusts to the center of what its conflict between men and Übermensch is really all about, via an allegory about size and strength starring a villain known as Termite. Most of the series’ supers parody famous heroes from the Marvel and DC Universes, and Termite, as the moniker suggests, is the show’s perverse answer to Ant-Man, minus the goodness and charm.

What Termite lacks in those virtues he compensates for by overcompensating, as it were. In this case, he makes himself small enough to sprint between rails of coke as tall as he is before leaping inside of his lover’s urethra and gently walking toward the prostate as he strokes its walls.

Cocaine is a helluva drug, and Termite, who had a bump before shrinking, can’t stop himself from sneezing – which instantly reverts him to full size, exploding his ecstatic lover in half. Even by this show’s standards, this was an extreme gross-out, one doubling as a red carpet leading into a season thumping with parallels to real world threats shadowed by distressing social and political shifts.

There’s no evidence that its showrunner Eric Kripke intentionally pumped up the phallus references in the first few episodes for any other reason than to have fun with streaming’s liberal policy concerning full-frontal nudity.  (We reached out to Amazon in the hope of interviewing him for this story; unsurprisingly, we did not hear back.)

Still, in a show that counts among its second season highlights having one of its heroes do battle with an expanding super-schlong whipped around by a character called Love Sausage, this season seems to plug into its BDE with renewed vigor as the country faces an unforeseen masculinity crisis . . . in the form of its top hero Homelander (Antony Starr) coming unhinged.

RELATED: In the new season of “The Boys,” everyone’s selling out, and society gets stuck with the check

“The Boys” doesn’t need to show its fleshy bits to thump the table with its points about fascism and toxic misogyny.

Only one thing stands between his misdirected rage and a populace unable to defend itself against his power, and that is the public’s adulation. Worship is Homelander’s personal male enhancement drug, as it turns out. Being informed by his assistant Ashley (Colby Minnie) that his admiration among white males in the rust belt has gone up by 44% gives him a massive hard-on she can’t ignore, especially since he’s naked when she delivers the news.

When she becomes so flustered at his boner to continue delivering her status report, he yells at her, “That’s got nothing to do with you. Just keep going!”

The bleak undertow here is that Ashley is both a masochist and a sadist, taking her boss’s abuses and passing them down the line to ensure nothing ever gets better. Her utter loyalty to Homelander is rewarded by him asking her, with a look that truly threatens to kill her, if “her idiot brain is getting f**ked by stupid,” only to have her repeat the same line to an underling later. The cocky message here is that you’re either stabbing or being stabbed; lose control of the joystick and, as Termite’s unlucky lover found out, it’s game over.

Within “The Boys,” though, penile representations are always employed transgressively – for laughs, shock, or horror.

Scenes like the fourth episode’s hand-to-dildo battle check all three boxes, which kicks off with Kimiko (Karen Fukuhara) assassinating a Russian oligarch by penetrating his skull with a device called the Black Noir Silent Screamer.

One cannot fully appreciate the irony of that joke without seeing it. Then again, doing that also requires a strong stomach.

Kimiko beating a roomful of armed Russian gangsters to death with assorted vibrators and sex toys is hilarious – and awesome, let’s be real – but it’s also a low-key tragedy. She hates her enhanced strength and invulnerability and despises being viewed as a weapon instead of a person. “I’m not your f**king gun,” she texts at Butcher.

“That is exactly what you are,” he fires back, reminding her and everyone else on his crew who has the biggest bat of the bunch. 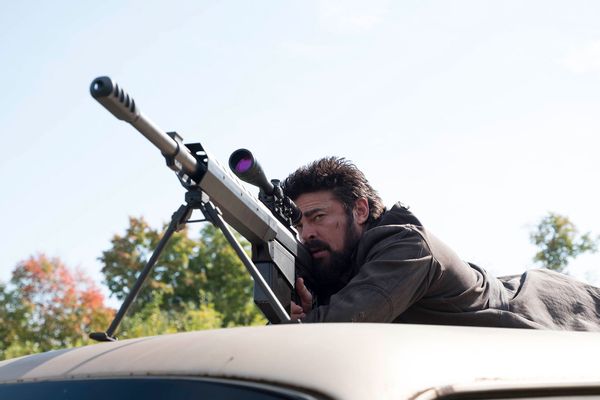 “The Boys” is but one of many shows waxing phallocentric over the past couple of years, and in terms of pole count, plenty of other series are a few lengths ahead of it – “Westworld,” and “Minx,” to name two among HBO’s warehouse of options. And for all of its risqué scenes of superhero sexual excess, “The Boys” would have to make a concerted effort to catch up with “Euphoria,” which slapped viewers across the eyes with a 30-sausage parade in its second episode. Premium cable has long reigned as the main stage for most scripted drama poker tournaments, purely as a matter of show.

Quite recently, though, man’s true best friend has become a featured player in some narratives. There will always be shows that treat views of flaccid peen as a joke, as was the case with Mike Myers’ “The Pentaverate” and an opening episode sketch from Amazon’s revival of “The Kids in the Hall.” But in “Pam & Tommy” Sebastian Stan’s Tommy Lee Jr. – a prosthetic, to be clear – plowed new ground by engaging his owner in a serious vein-to-brain conversation about love and fidelity.

Of course, one can easily view this scene and anything else in “The Boys” as a simple off-color joke – way off. The implication of full frontal male nudity is malleable that way on television, even when it’s merely implied, as is the case with Homelander’s fully raised mast. It can symbolize a broadly apparent wrong or add soft levity to a grim situation.

In some extensions, though, it is a compass whose true North is authoritarianism. Homelander has personality traits in common with an offstage public persona haunting our own lives. That’s certainly no accident, which makes it a scary thought to see him physically and emotionally naked, and tumescent with the realization that he can get away with anything and people will love him anyway.

The implication of full frontal male nudity is malleable on television.

This week of all weeks sharpens the dangerous absurdity of that subplot, what with American TV viewers divided between witnessing the House Congressional Committee hearings on the insurrection that took place on January 6th, 2021, and those choosing to believe the lies claiming its extensively researched findings to be propaganda.

“The Boys” presents a world where propaganda is as inescapable as rulership by force and physical power – and between the omnipresent Vought, the government, and Earth’s strongest and least controllable, it’s a never-ending measuring contest.

The polite way to sum up our situation is that the patriarchy is shoving injustice down our throats. “The Boys” way of describing it is that dicks are everywhere and ready to club anyone into submission who doesn’t bow before them. The only defense is to harden up and hit back.

New episodes of “The Boys” debut Fridays on Prime Video.